Lucas Cranach the Elder (c. 1472 – 16 October 1553) was a German Renaissance painter and printmaker in woodcut and engraving. He was court painter to the Electors of Saxony for most of his career, and is known for his portraits, both of German princes and those of the leaders of the Protestant Reformation, whose cause he embraced with enthusiasm, becoming a close friend of Martin Luther. He also painted religious subjects, first in the Catholic tradition, and later trying to find new ways of conveying Lutheran religious concerns in art. He continued throughout his career to paint nude subjects drawn from mythology and religion. He had a large workshop and many works exist in different versions; his son Lucas Cranach the Younger, and others, continued to create versions of his father's works for decades after his death. Lucas Cranach the Elder has been considered the most successful German artist of his time. More Lucas Cranach the Elder

Mary was one of a group of women who kept track of Jesus’ travels and ministered to His needs whenever they could. The women provided food, shelter, laundering, and even money so that Jesus and the disciples could travel freely preaching the Gospel. 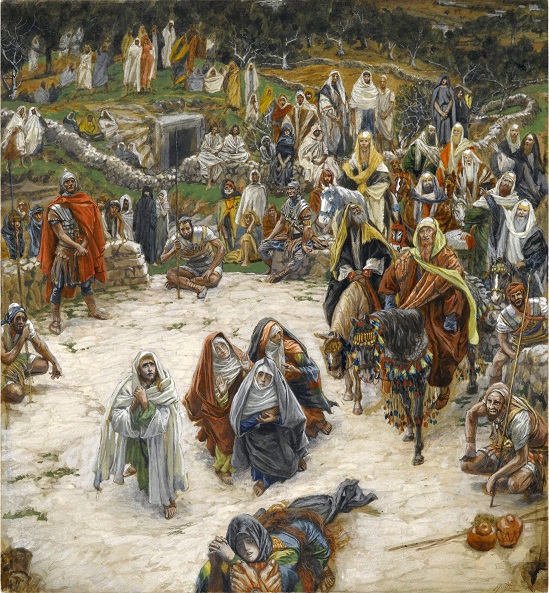 There is some speculation as to whether or not Mary mother of James, and the wife of Clopas, was also Jesus’ aunt. 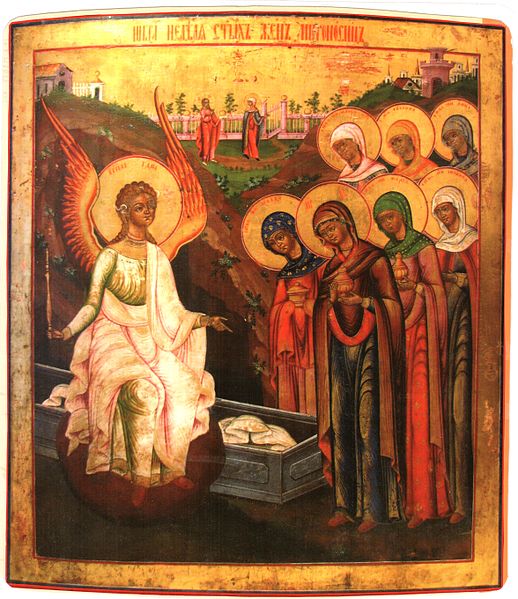 The White Angel with its wings raised sits on a stone, blocking the entrance to the cave, near the empty tomb, where the shroud of Christ lies.

Before the angel there are seven wives of chamomiles with vessels in their hands in peace: first row: Martha from Bethany (Mary's sister); Virgin Mary; Mary (Martha's sister); Salomia
top row: Maria (other), Susanna, Anna.

Above in the valley between the mountains, the risen Christ against the backdrop of Mount Jerusalem (the city in the upper right) talks with Mary Magdalene.

She was present at the Crucifixion and afterwards went with Salomé and Mary Magdalene to the tomb to anoint Jesus’ body with spices. Being greeted by an angel who announced the Resurrection, they returned to tell the apostles of what they had learned. 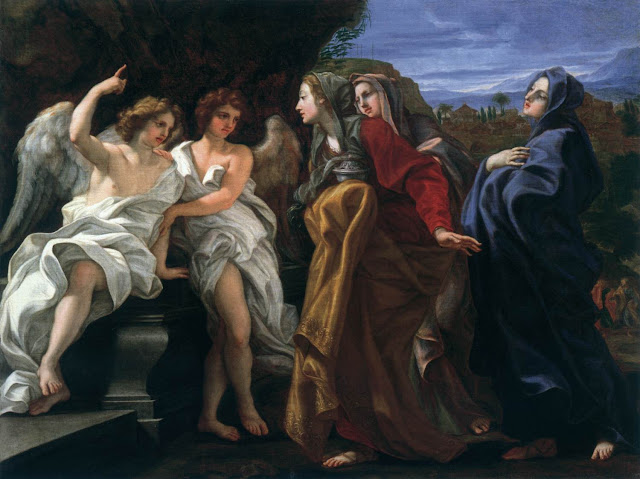 Giovanni Battista Gaulli (8 May 1639 – 2 April 1709), also known as Baciccio, was an Italian artist working in the High Baroque and early Rococo periods. He is best known for his grand illusionistic vault frescos in the Church of the Gesù in Rome, Italy. His work was influenced by Gian Lorenzo Bernini.

Gaulli was born in Genoa, and initially apprenticed with Luciano Borzone. In mid-17th century. Gaulli's Genoa was a cosmopolitan Italian artistic center open to both commercial and artistic enterprises from north European countries. Gaulli's earliest influences would have come from an eclectic mix of these foreign painters and other local artists whose warm palette Gaulli adopted. In the 1660s, he experimented with the cooler palette and linear style of Bolognese classicism.

He first introduced him to Gianlorenzo Bernini in Rome, who promoted him. He found patrons among the Genoese, and was accepted into the Roman artists' guild, where he was to later hold several offices. The next year, he received his first public commission for an altarpiece, in the church of San Rocco, Rome. He received many private commissions for mythological and religious works.

At his height, Gaulli was one of Rome's most esteemed portrait painters. Gaulli died in Rome, shortly after 26 March 1709, probably 2 April. More on Giovanni Battista Gaulli

During the early persecution of Christians around 40 AD, the “three Maries,” were expelled from Jerusalem. They were placed, together with Lazarus, Martha, Maximin and Sidon, on a boat without oars or supplies. Sarah, their servant, was left behind, but Salomé threw her coat onto the waters and the coat became a raft, allowing Sarah to board. The boat eventually landed near Les Saintes-Maries-de-la-Mer in present-day France. 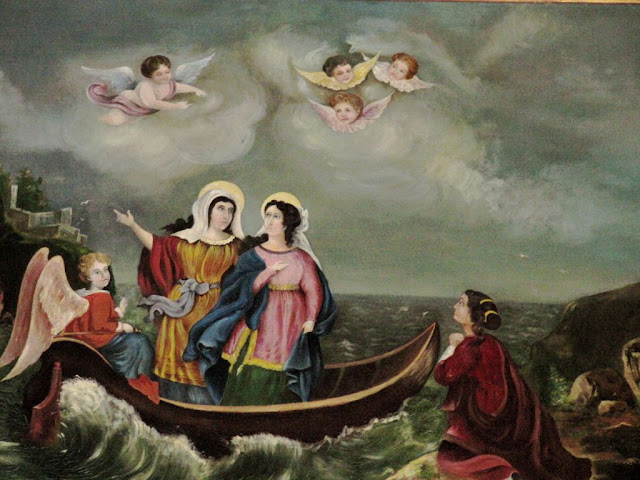 Unknown artist
The two Marys arriving on a stormy day, with Sarah waiting for them
Les Saintes-Maries-de-la-Mer


The three Maries settled in Camargue, where they taught the good news of Christ. They peacefully gave up their souls to the Lord, and their grave became a popular place of pilgrimage.


Please visit my other blogs: Art Collector, Mythology, Marine Art, Portrait of a Lady, The Orientalist, Art of the Nude and The Canals of Venice, Middle East Artists, and 365 Saints, also visit my Boards on Pinterest
Images are copyright of their respective owners, assignees or others. Some Images may be subject to copyright
I don't own any of these images - credit is always given when due unless it is unknown to me. if I post your images without your permission, please tell me.
I do not sell art, art prints, framed posters or reproductions. Ads are shown only to compensate the hosting expenses.
If you enjoyed this post, please share with friends and family.
Thank you for visiting my blog and also for liking its posts and pages.
Please note that the content of this post primarily consists of articles available from Wikipedia or other free sources online.
at June 19, 2020