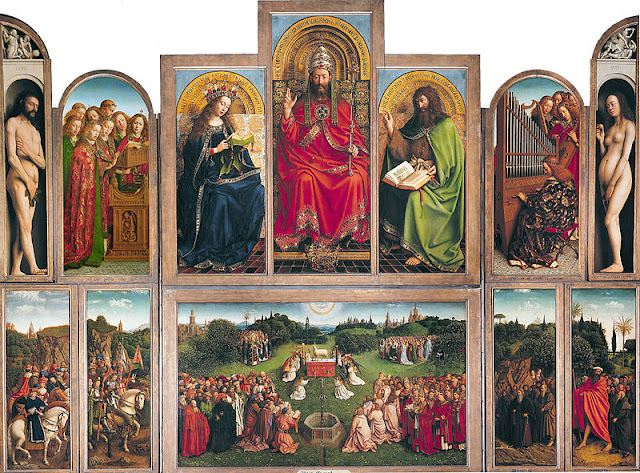 Jan van Eyck (before 1390 – 9 July 1441) was a painter from the County of Loon (present day Belgium) active in Bruges. He is one of the early innovators of what became known as Early Netherlandish painting, and one of the most significant representatives of Early Northern Renaissance art. He took employment in the Hague around 1422, when he was already a master painter with workshop assistants, and employed as painter and valet de chambre with John III the Pitiless, ruler of Holland and Hainaut. He was then employed in Lille as court painter to Philip the Good, Duke of Burgundy after John's death in 1425, until he moved to Bruges in 1429 where he lived until his death.

About 20 surviving paintings are confidently attributed to him, as well as the Ghent Altarpiece.


Van Eyck painted both secular and religious subject matter, including altarpieces, single-panel religious figures and commissioned portraits. He was well paid by Philip, who sought that the painter was secure financially and had artistic freedom so that he could paint "whenever he pleased". Van Eyck's work comes from the International Gothic style, but he soon eclipsed it, in part through a greater emphasis on naturalism and realism. He achieved a new level of virtuosity through his developments in the use of oil paint. He was highly influential, and his techniques and style were adopted and refined by the Early Netherlandish painters. More on Jan van Eyck

The First Martyrs of the Church of Rome were Christians martyred in the city of Rome during Nero's persecution in 64. They are celebrated in the Roman Catholic Church as an optional memorial on 30 June.

There were early Christians in Rome within a dozen or so years after the death of Jesus, though they were not the converts of Paul. He had not yet visited them at the time he wrote his Epistle to the Romans in 57-58 AD. Paul wrote to a community of both Jews and Gentiles. 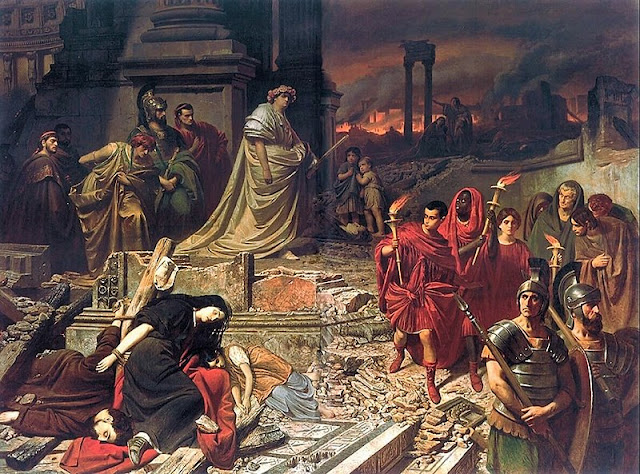 Karl Theodor von Piloty (1 October 1826 – 21 July 1886) was a German painter, born in Munich. In 1840, Karl was admitted as a student of the Munich Academy. A year later acclaimed history paintings were shown in Munich, their realistic depiction of historic subject matter made a lasting impression on him. After a journey to Belgium, France and England, he commenced work as a painter of genre pictures.

But he soon forsook this branch of painting in favour of historical subjects, and produced in 1854 for King Maximilian II The Accession of Maximilian I to the Catholic League in 1609. It was succeeded by Seni at the Dead Body of Wallenstein (1855), which gained for the young painter the membership of the Munich Academy, where he succeeded Schorn (his brother-in-law) as professor in 1856. He was appointed keeper of the Munich Academy, and was a successful teacher. More Karl Theodor von Piloty

In July of 64 AD, the Great Fire of Rome broke out. Largely made up of wooden tenements, fire was a frequent occurrence in the city. Rumor blamed the tragedy on the unpopular emperor Nero, who wanted to enlarge his palace. It is this incident that gave rise to the legend that “Nero fiddled while Rome burned,” which had begun as a rumor. 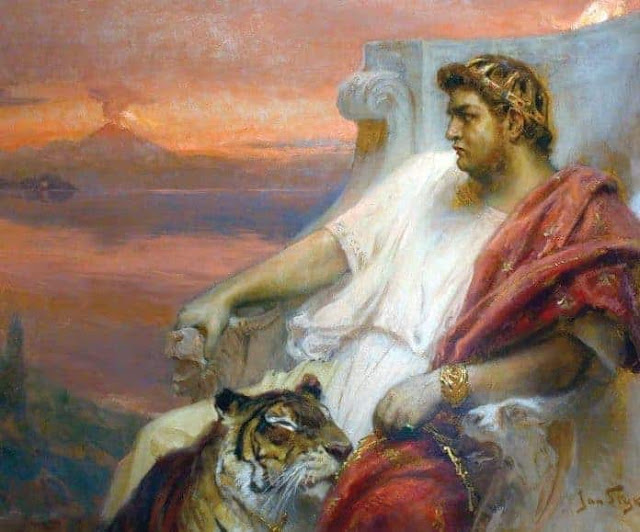 Jan Styka (April 8, 1858 in Lwów – April 11, 1925 in Rome) was a Polish painter noted for producing large historical, battle-piece, and Christian religious panoramas. He was also illustrator and poet. Known also as a great patriotic speaker - his speeches were printed in 1915 under the French title L'ame de la Pologne (The Soul of Poland).

Styka attended school in his native Lwów (Lemberg, now Lviv) then studied at the Academy of Fine Arts in Vienna, Austria following which he took up residence in Kraków in 1882 where he studied historical painting under Jan Matejko. Next he came back to Lwów and opened there a workshop. Here, together with a celebrated Polish historical painter Wojciech Kossak. Later he travelled to Italy for a short time before moving to France where the great art movements at Montmartre and Montparnasse were taking shape and where he would spend a large part of his life. More on Jan Styka

In fact, Nero was not even in Rome when the fire started, but was at Antium. Still, as a relief to the homeless and fugitive populace, he opened the Campus Martius, the buildings of Agrippa, even his own gardens, and threw up a number of extemporized shelters to accommodate the helpless multitude. The necessities of life were brought up from Ostia and the neighboring municipalities, and the price of grain was lowered. Yet his measures, popular as their character might be, failed of their effect; for the report had spread that, at the very moment when Rome was aflame, he had mounted his private stage, and typifying the ills of the present by the calamities of the past, had sung the destruction of Troy.” 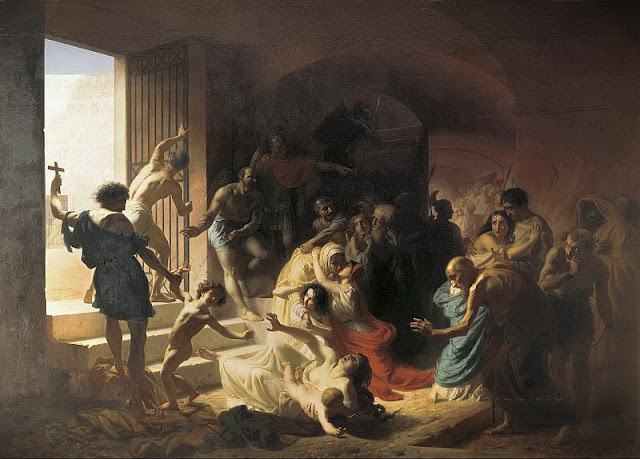 The picture shows the martyrs who will soon be executed for their faith by the Roman authorities. The Roman Empire, would gather people for the public execution of all the perpetrators. The Colosseum was overcrowded when Christians were executed. All the martyrs who accepted the faith and the cross.

He returned to Russia in 1862. The following year, he was recognized as an honorary free member of the Academy for the large painting "Christian Martyrs in the Colosseum", made in Rome. At the exhibition in 1864, the painting Death of Princess Tarakanova brought him the title of professor at the Academy of Arts .

The artist died at the age of 35. More on Constantine Flavitsky

Whilst many blamed Nero for starting the fire, the emperor managed to find a scapegoat for the disaster, blaming the Christians, who were believed to be engaged in various wicked deeds. According to Tacitus, “vast numbers were convicted, not so much on the count of arson as for hatred of the human race,” 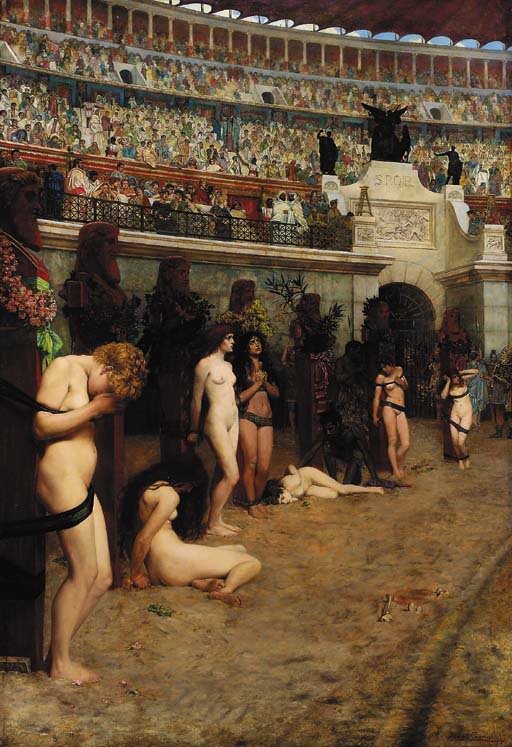 Herbert Gustave Schmalz, (1856–1935)
Faithful unto Death, c. 1888
I have no further description of this artwork at this time

Herbert Gustave Schmalz (1856–1935) who named himself Herbert Gustave Carmichael in 1918, was an English painter. He is counted among the Pre-Raphaelites.

After his return to London he made a name for himself as a history painter, with a style influenced by the Pre-Raphaelites and orientalism. In 1884 he successfully exhibited his painting Too Late at the Royal Academy. After a voyage to Jerusalem in 1890 he made a series of paintings with New Testament topics, with Return from Calvary (1891) one of the best known.

After 1895 Schmalz increasingly painted portraits. In 1900 he held a big solo exhibition named "A Dream of Fair Women" in the Fine Art Society in Bond Street.

These martyrs were called the “Disciples of the Apostles” and their firmness in the face of their gruesome deaths were a powerful testimony that led to many conversions in the early Roman Church.

Vasily Sergeyevich Smirnov (12 August 1858, Moscow - 17 December 1890, near Golitsyno) was a Russian painter in the Academic style who specialized in scenes from ancient history.

In 1875, he enrolled at the Moscow School of Painting, Sculpture and Architecture. He participated in an exhibition there in 1878, winning a silver medal.

That same year, he transferred to the Imperial Academy of Arts in Saint Petersburg. In 1882, he was awarded the title of "Artist" and a stipend to study abroad.

He went to Italy, via Vienna, and eventually settled in Rome. He moved to Turin, then spent some time in Paris, exhibiting at the Salon. After travelling throughout Northwestern Europe, he returned to Italy.

In 1885, he made sketches at Pompeii, which was the start of his interest in Classical subjects. The following year, he began work on "The Death of Nero", which took two years to complete. It was sent to Saint Petersburg and, after several showings, was bought by Tsar Alexander III.


In 1889, he became an associate professor at the Academy. Sensing the end was near, he decided to return to the family estate. He died while in transit, on the train between Kubinka and Golitsyno. More on Vasily Sergeyevich Smirnov

Threatened by an army revolt and condemned to death by the senate, Nero committed suicide in A.D. 68 at the age of thirty-one.

Thank you for visiting my blog and also for liking its posts and pages.
Please note that the content of this post primarily consists of articles available from Wikipedia or other free sources online.
at June 30, 2020