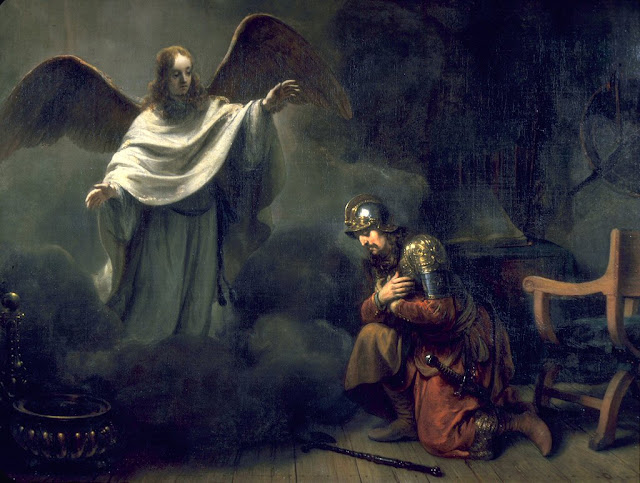 A dramatic play of light and shadow can add an emotional charge to the depiction of an event. This was the great lesson that Eeckhout absorbed from his teacher Rembrandt van Rijn in the late 1630s and was still using in 1664, when he signed and dated this painting. This is especially effective for representing contact between the human and the divine-here, the appearance of an angel to the Roman centurion Cornelius.

Gerbrand van den Eeckhout (19 August 1621 – 29 September 1674), was a Dutch Golden Age painter and a favourite student of Rembrandt. He was also an etcher, an amateur poet, a collector and an adviser on art.

A fellow pupil to Ferdinand Bol, Nicolaes Maes and Govert Flinck, he was regarded as inferior to them in skill and experience; he soon assumed Rembrandt's manner with such success that his pictures were confused with those of his master.

It is difficult to form an exact judgment of Eeckhout's qualities at the outset of his career. His earliest pieces are probably those in which he more faithfully reproduced Rembrandt's peculiarities. Exclusively his is a tinge of green in shadows marring the harmony of the work, a gaudiness of jarring tints, uniform surface and a touch more quick than subtle.

Eeckhout, unmarried, was also appreciated as art connoisseur, and dealing with poets and scientists. At the end of his life he was living with his sister-in-law, a widow, on Herengracht, at a very prestigious part of the canal. He died in Amsterdam. More on Gerbrand van den Eeckhout

Cornelius was a centurion in the Cohors II Italica Civium Romanorum. He was stationed in Caesarea, the capital of Roman Judaea province. He is depicted in the New Testament as a God-fearing man who always prayed and was full of good works and deeds of alms. Cornelius receives a vision in which an angel of God tells him that his prayers have been heard, he understands that he's chosen for a higher alternative. The angel then instructs Cornelius to send the men of his household to Joppa, where they will find Simon Peter, who is residing with a tanner by the name of Simon. 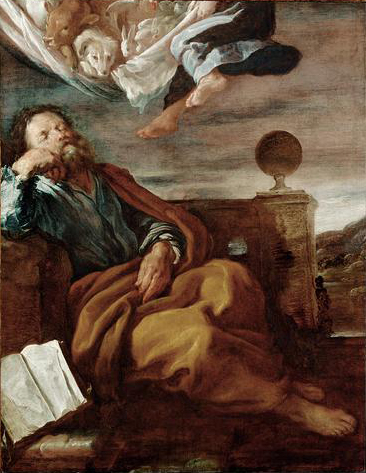 Domenico is said to have apprenticed initially under Ludovico Cigoli, or his pupil Andrea Commodi in Rome. He then worked in Mantua from 1613 to 1622, patronized by the Cardinal, later Duke Ferdinando I Gonzaga. In the Ducal Palace, he painted the Miracle of the Loaves and Fishes. The series of representations of New Testament parables he carried out for his patron's studiolo gave rise to a popular specialty, and he and his studio often repeated his compositions.

In August or September 1622, his feuds with some prominent Mantuans led him to move to Venice, where he remained despite pleas from the Duke to return to Mantua, Fetti changed his style: his formalized painting style became more colorful. In addition, he devoted attention to smaller cabinet pieces that adapt genre imaging to religious stories.

His painting style appears to have been influenced by Rubens. He would likely have continued to find excellent patronage in Venice had he not died there in 1623 or 1624. More on Domenico Fetti

The conversion of Cornelius comes after a separate vision given to Simon Peter himself. In the vision, Simon Peter sees all manner of beasts and fowl being lowered from Heaven in a sheet. A voice commands Simon Peter to eat. When he objects to eating those animals that are unclean according to Mosaic Law, the voice tells him not to call unclean that which God has cleansed. 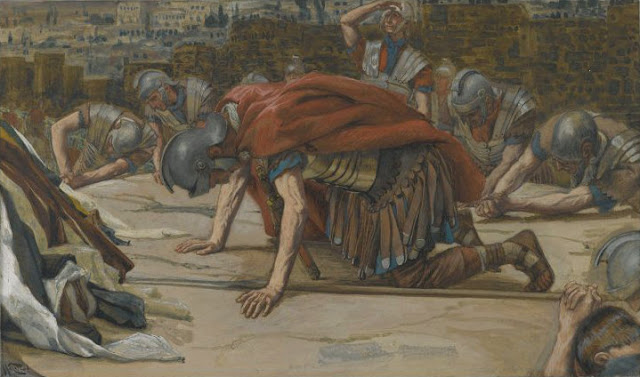 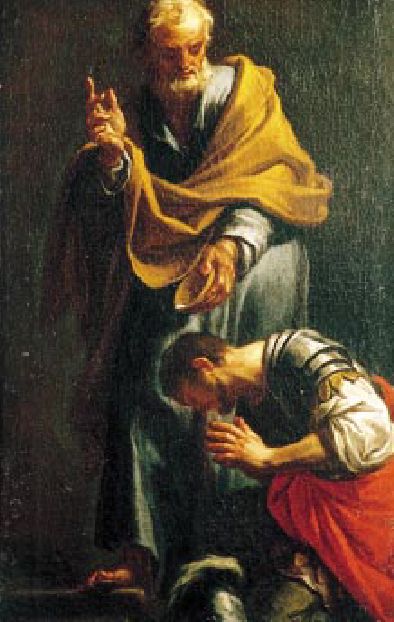 Born in Capodistria, he was the son of an architect, by whom he was instructed in the first rudiments of design. He then studied in Venice. He moved to Rome, where he remained until his death, in 1746. His brother, Angelo Trevisani remained a prominent painter in Venice.

In Rome, he was supported by Cardinal Pietro Ottoboni. He was also favored with the patronage of Cardinal Chigi. Chigi employed him in several considerable works, and recommended him to the protection of Pope Clement XI, who not only commissioned him to paint one of the prophets in San Giovanni Laterano, but engaged him to decorate the cupola of the cathedral in Urbino. He was employed by the Duke of Modena, in copying the works of Correggio and Parmigianino, and also painted in Brunswick, Madrid, Munich, Stockholm, and Vienna.

He became a member of the Academy of Arcadia in 1712. Trevisani died in Rome in 1746. More on Francesco Trevisani

The reception of Cornelius sparked a conversation among the Jewish leaders of the new Christian church, culminating in the decision to allow Gentiles to become Christians without conforming to Jewish requirements for circumcision. More on Cornelius 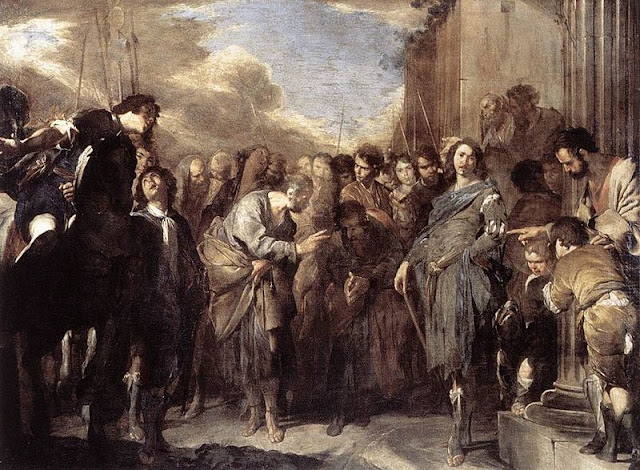 Bernardo Cavallino (1616–1656) was an Italian painter and draughtsman. He is regarded as one of the most original painters active in Naples during the first half of the 17th century.

Born in Naples, his paintings are some of the more stunningly expressive works emerging from the Neapolitan artists of his day. Little is known about his background or training. Of eighty attributed paintings, less than ten are signed. He worked through private dealers and collectors whose records are no longer available.

One of his masterpieces is the billowing proletarian Blessed Virgin at the Brera Gallery in Milan. Passive amid the swirling, muscular putti, this Neapolitan signorina delicately rises from the fog, the updated Catholic baroque equivalent of a Botticelli's Venus. His The Ecstasy of St Cecilia exists both as cartoon (Museo di Capodimonte, Naples)[2] and final copy in the Palazzo Vecchio of Florence. Finally, his Esther and Ahasuerus hangs in the Uffizi Gallery.

He is thought to have died during the plague epidemic in 1656. More on Bernardo Cavallino

In  Skepsis lived a ruler by the name of Demetrios who venerating the pagan gods. Learning about the arrival of Cornelius in the city, he immediately summoned him and asked him the reason for his coming. Cornelius answered that he came to free him from the darkness of ignorance. The prince became enraged and demanded that Cornelius offer sacrifice to the idols.

The Saint asked to be shown the gods. When he entered the pagan temple, Cornelius turned towards the east and uttered a prayer to the Lord. There was an earthquake, and the temple of Zeus and the idols situated in it were destroyed. They bound the Saint and took him to prison.

At this point, one of his servants informed Demetrios that his wife Evanthia and child Demetrian had perished beneath the rubble of the destroyed temple. After a certain while, one of the pagan priests reported that he heard the voice of the wife and son somewhere in the ruins and that they were praising the God of the Christians. The pagan priest asked that the imprisoned one be released, in gratitude for the miracle worked by Cornelius, and the wife and son of the Demetrios remained alive.

After this the Demetrios accepted holy Baptism. Cornelius lived for a long time in Skepsis, converting all the pagan to Christ. Cornelius died in old age and was buried not far from the pagan temple he destroyed. More on Skepsis 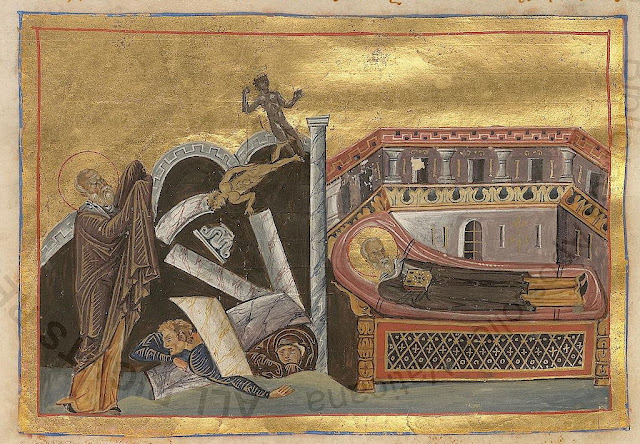 The Menologion of Basil II is an illuminated manuscript designed as a church calendar or Eastern Orthodox Church service book (menologion) that was compiled c. 1000 AD, for the Byzantine Emperor Basil II

Saint Cornelius the Centurion and Martyr 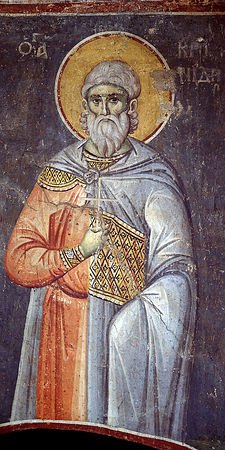 Saint Cornelius the Centurion and Martyr

Please note that the content of this post primarily consists of articles available from Wikipedia or other free sources online.
at February 02, 2019