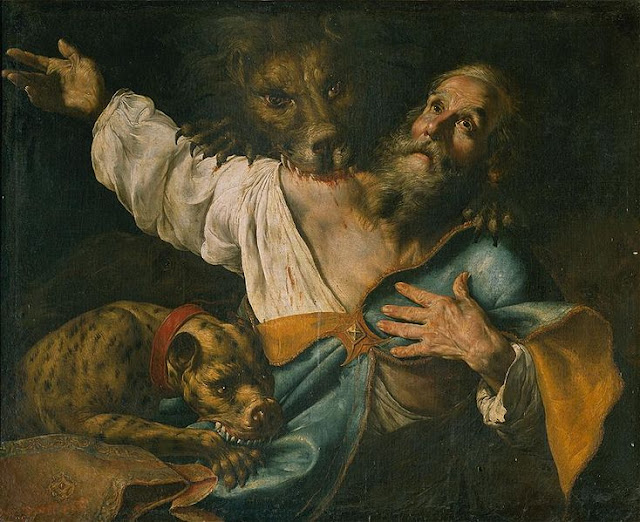 "Instigate the animals so that in them I find my sepulcher and nothing remains of my body in order not to be of any burden to anyone, supplicate God for me, that by this means make me become a host for God"

Ignatius of Antioch (c. 35  – c. 108), also known as Ignatius Theophorus, or Ignatius Nurono was an early Christian writer and bishop of Antioch. En route to Rome, where he met his martyrdom, Ignatius wrote a series of letters. This correspondence now forms a central part of the later collection known as the Apostolic Fathers. His letters also serve as an example of early Christian theology. Important topics they address include ecclesiology, the sacraments, and the role of bishops. 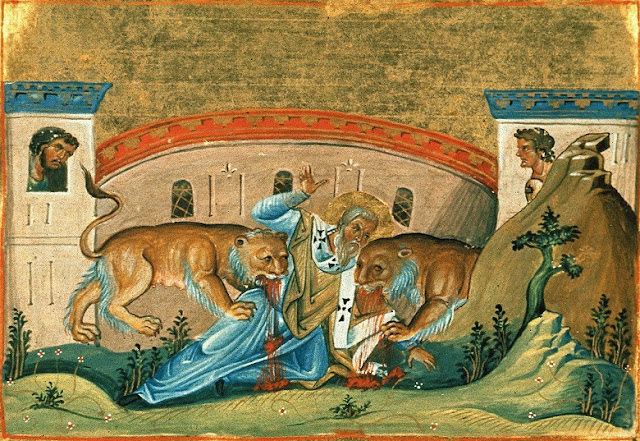 Martyrdom of St. Ignatius
Menologio of Basil II, a. About 1000
Vatican Library

The Menologion of Basil II is an illuminated manuscript designed as a church calendar or Eastern Orthodox Church service book that was compiled c. 1000 AD, for the Byzantine Emperor Basil II (r. 976–1025). It contains a synaxarion, a short collection of saints' lives, compiled at Constantinople for liturgical use, and around 430 miniature paintings by eight different artists. It was unusual for a menologion from that era to be so richly painted. It currently resides in the Vatican Library. More on The Menologion of Basil II

It is said Ignatius converted to Christianity at a young age. Later in his life, Ignatius was chosen to serve as Bishop of Antioch. Theodoret of Cyrrhus claimed that St. Peter himself left directions that Ignatius be appointed to the episcopal see of Antioch. A tradition arose that he was one of the children whom Jesus Christ took in his arms and blessed.

After serving in Antioch for over 35 years, Ignatius was arrested during the persecution of Trajan and sentenced to death in Rome. 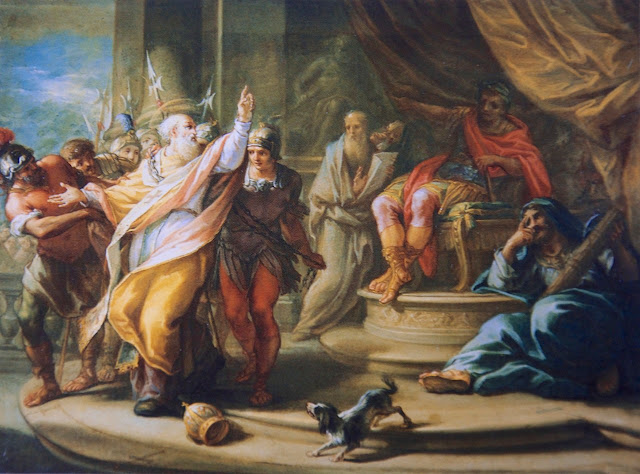 Giovanni Domenico Piastrini (1678–1740) was an Italian painter of the Baroque period, active in Tuscany and Rome.


He learned first skills from his father, Francesco Maria, who had painted in the Annunziata and San Lorenzo churches of Florence. But then traveled to Rome to work in the studio of Benedetto Luti. He painted for the Basilica of our Lady of Humility in Pistoia. He also painted altarpieces for churches in Rome (including Santa Maria in Via Lata) and Pisa. He died in Rome.

Among his works are a canvas depicting Emperor Trajan condemning Saint Ignatius of Antioch (1710–1716) at the Galleria Nazionale d'Arte Antica in Palazzo Barberini, Rome ; a Marriage at Cana at Bob Jones University Museum & Gallery, Greenville, South Carolina; a Meal of St Phillip Benizi (1723–1724) at the church of Santa Maria in Via, Rome; and a Virgin in Glory with Saints Joseph, Vittoria, and Ranieri for the church of Santa Maria del Carmine, Pisa. More on Giovanni Domenico Piastrini

During the journey to Rome, Ignatius and his entourage of soldiers made a number of stops in Asia Minor. Along the route Ignatius wrote six letters to the churches in the region and one to a fellow bishop, Polycarp, bishop of Smyrna.

Ignatius himself wrote that he would be thrown to the beasts, and in the fourth century Eusebius reports tradition that this came to pass, which is then repeated by Jerome, who is the first to explicitly mention "Lions". John Chrysostom is the first to allude to the Colosseum as the place of Ignatius' martyrdom. 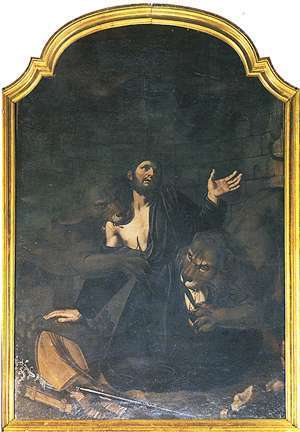 Francesco Solimena (October 4, 1657 – April 3, 1747) was a prolific Italian painter of the Baroque era, one of an established family of painters and draughtsmen. He received early training from his father, Angelo Solimena, with whom he executed a Paradise for the cathedral of Nocera and a Vision of St. Cyril of Alexandria for the church of San Domenico at Solofra.

He settled in Naples in 1674, there he worked in the studio of Francesco di Maria and later Giacomo del Po. He apparently had taken the clerical orders, but was patronized early on, and encouraged to become an artist by Cardinal Vincenzo Orsini (later Pope Benedict XIII). By the 1680s, he had independent fresco commissions, and his active studio came to dominate Neapolitan painting from the 1690s through the first four decades of the 18th century. He modeled his art—for he was a highly conventional painter—after the Roman Baroque masters. Solimena painted many frescoes in Naples, altarpieces, celebrations of weddings and courtly occasions, mythological subjects, characteristically chosen for their theatrical drama, and portraits. His settings are suggested with a few details—steps, archways, balustrades, columns—concentrating attention on figures and their draperies, caught in pools and shafts of light. Art historians take pleasure in identifying the models he imitated or adapted in his compositions. His numerous preparatory drawings often mix media, combining pen-and-ink, chalk and watercolor washes. More on Francesco Solimena

After Ignatius' martyrdom in the Circus Maximus his remains were carried back to Antioch by his companions. More on Ignatius of Antioch 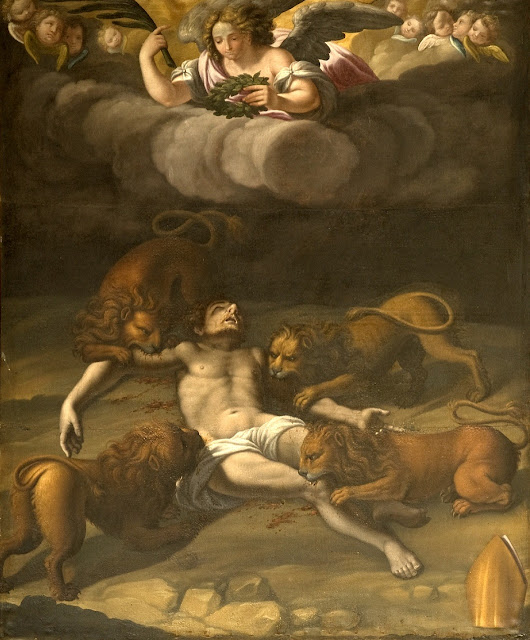 Thank you for visiting my blog and also for liking its posts and pages.
at February 01, 2019