Saint Blaisese, was a physician, and bishop of Sebastea in historical Armenia. According to the Acta Sanctorum, he was martyred by being beaten, attacked with iron combs, and beheaded. He is the patron saint of wool combers. 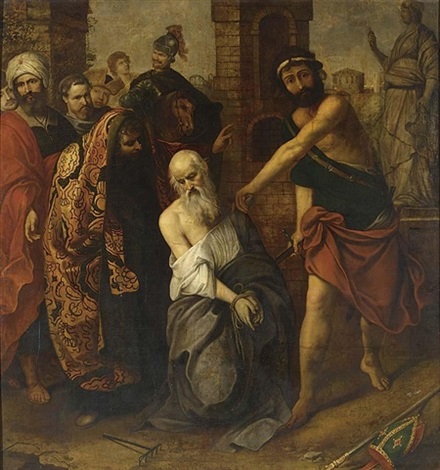 Gaspar de Crayer or Jasper de Crayer (18 November 1584 – 27 January 1669) was a Flemish painter known for his many Counter-Reformation altarpieces and portraits. He was a court painter to the governors of the Southern Netherlands and worked in the principal cities of Flanders where he helped spread the Rubens style.

Gaspar de Crayer ooked for opportunity in Brussels. He is believed to have studied under Raphael Coxie, the court painter of the governors of the Spanish Netherlands Albert VII, Archduke of Austria and Isabella Clara Eugenia. He became a master in the Brussels Guild of Saint Luke in 1607. He was a dean of the Guild from 1611 to 1616 and was a member of the Brussels city council in 1626-1627. He remained in Brussels until 1664.

He mainly painted portraits of the elite and Counter Reformation altarpieces for local and foreign churches. His early work is in the trend of he 16th century tradition of Antwerp artists. Typical for this style is the unnatural perspective and the crowding of long wooden figures in the foreground. From 1618 he came under the influence of Rubens. The level of borrowing of motifs from Rubens suggests that he had some form of contract with the workshop of Rubens.


From then onwards, his work was more influenced by Anthony van Dyck, whose emotionally charged interpretation of religious subjects appealed to his sensibility. His work became more dynamic in conception. More on Gaspar de Crayer

From being a healer of bodily ailments, Saint Blaise became a physician of souls, then retired for a time to a cavern where he remained in prayer. He made friends with the wild animals. One day a group of hunters seeking wild animals for the amphitheater stumbled upon Blaise’s cave. They were first surprised and then frightened. The bishop was kneeling in prayer surrounded by patiently waiting wolves, lions and bears. 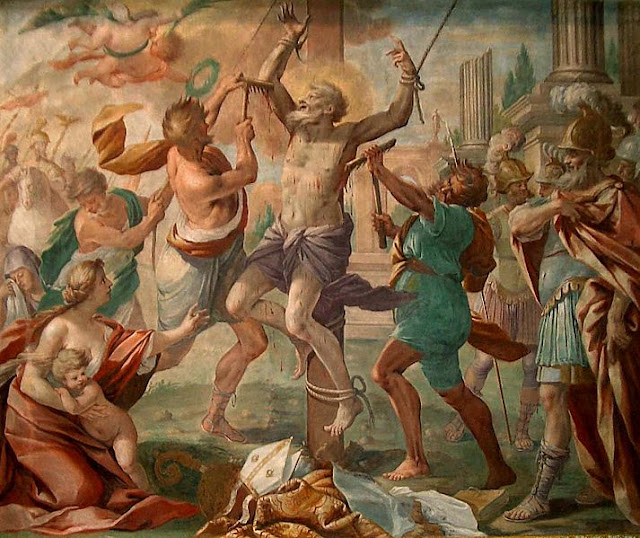 Giovanni Andrea Casella (17th century) was a Swiss-Italian painter active in the Baroque period. He was born in Lugano. He was a pupil of Pietro da Cortona in Rome. He was patronized by House of Savoy in frescoes for palaces in Turin, and known to be active in 1658. He painted in the Veneria Reale some fables, assisted by Giacomo, his nephew. More on Andrea Casella

As bishop of Sebastea, Blaise instructed his people as much by his example as by his words, and the great virtues and sanctity of the servant of God were attested by many miracles. From all parts, the people came flocking to him for the cure of bodily and spiritual ills. He is said to have healed animals (who came to the saint on their own for his assistance) and to have been assisted by animals. 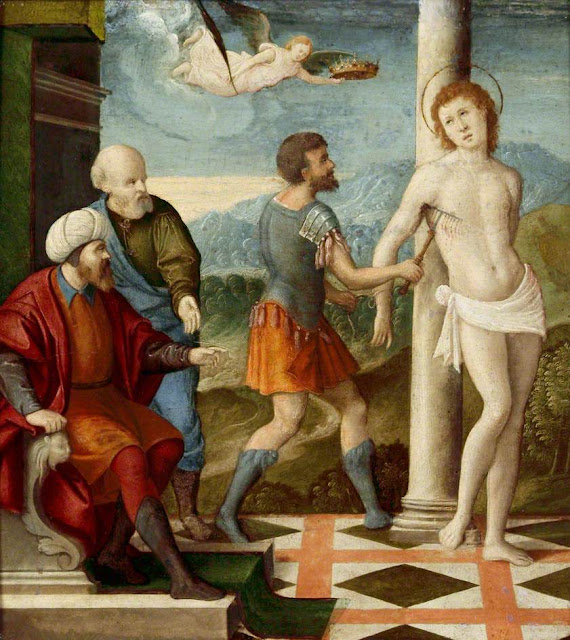 Girolamo da Santacroce (c. 1480/85 – c. 1556) was a 16th-century Italian painter of the Renaissance period, active mainly in Venice and the Venetian mainland.

da Santacroce was born in Bergamo,  but was active in Venice for most of his career. He became a pupil of the painter Gentile Bellini. On Gentile's death in 1507, he was left in Gentile's will half of the Oriental drawings made be Gentile. Santacroce then most likely worked as an assistant in the workshops of Giovanni Bellini and Cima da Conegliano.

He was a prolific artist and many of his works are signed and dated. He produced many copies after the works of the leading Venetian masters. His work shows the influence of Titian and Palma Vecchio. More on Girolamo da Santacroce

Although the Edict of Toleration (311), granting freedom of worship in the Roman Empire, was already five years old, persecution still raged in Armenia. In 316, the governor of Cappadocia and Lesser Armenia Agricolaus began a persecution by order of the Emperor Licinius and Saint Blaise was seized. After his interrogation and a severe scourging, he was hurried off to prison, and subsequently beheaded. More on Saint Blaisese 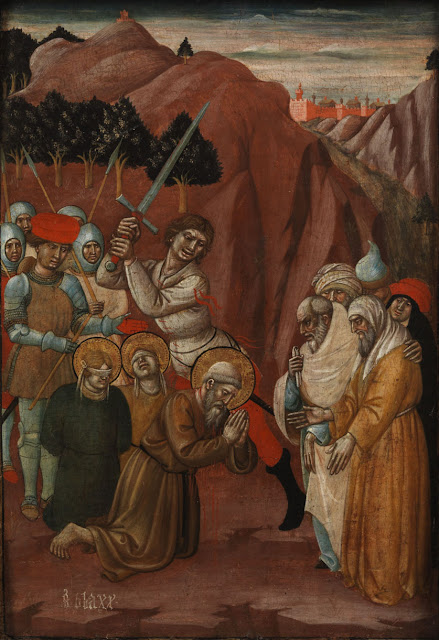 Giovanni Antonio Bellinzoni da Pesaro (1415-1477) was an Italian painter of the Renaissance.

Bellinzoni was born in Pesaro. He was taught by his father, and was influenced by Bartolomeo di Tommaso. There is evidence that he worked with his father on a church commission in Gradara (1429), and continued working with him through at least 1437. After his father died, Bellinzoni came into his own right, and was in high demand. He executed frescoes depicting Our Lady of Mercy and Our Lady Enthroned in the Church of the Blessed Sacrament, Saltara. He painted a polyptych found in the collegiate church of Sant'Esuperanzio in Cingoli. He continued working steadily in and around Pesaro until his death in 1477. A biography written about his life won the Salimbeni Prize in 1991 for excellence in the writing of art history on an Italian subject. More on Giovanni Antonio Bellinzoni da Pesaro