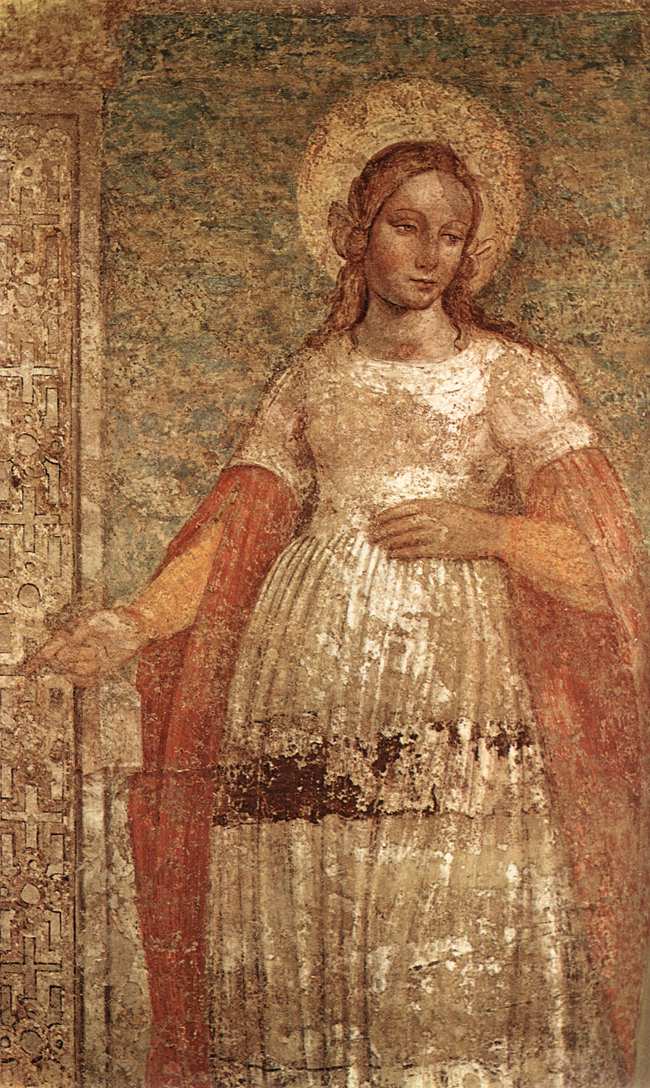 While he was nearly contemporary with Leonardo da Vinci, he painted in a style more akin to the pre-Renaissance. The dates of his birth and death are unknown; he is said to have been born at Fossano in Piedmont and his appellation attributed to his artistic affiliation with the Burgundian school.

His fame is principally associated with his work at the Certosa di Pavia complex, composed of the church and convent of the Carthusians. Only one known picture, an altar-piece at the Basilica of Sant'Eustorgio, can with probability be assigned to a period of his career earlier than 1486.

For two years after his return to Milan he worked at the church of San Satiro. From 1497 he was engaged in decorating with paintings the church of the Incoronata. Documentation of him thenceforth is scant. In 1508 he painted for a church in Bergamo; in 1512, his signature appears in a public document of Milan; in 1524 - and this is our last authentic record - he painted a series of frescoes illustrating the life of St. Sisinius in the portico of San Simpliciano at Milan.individuality. He holds an interesting place in the most interesting period of Italian art.

But to judge of his real powers and peculiar ideals, his system of faint and clear coloring, whether in fresco, tempera or oil; his somewhat slender and pallid types, not without something that reminds us of northern art in their Teutonic sentimentality as well as their fidelity of portraiture. More Ambrogio Borgognone

Agnes of Montepulciano, O.P. (1268 – 1317), was a Dominican prioress in medieval Tuscany, who was known as a miracle worker during her lifetime. She is honored as a saint by the Catholic Church. 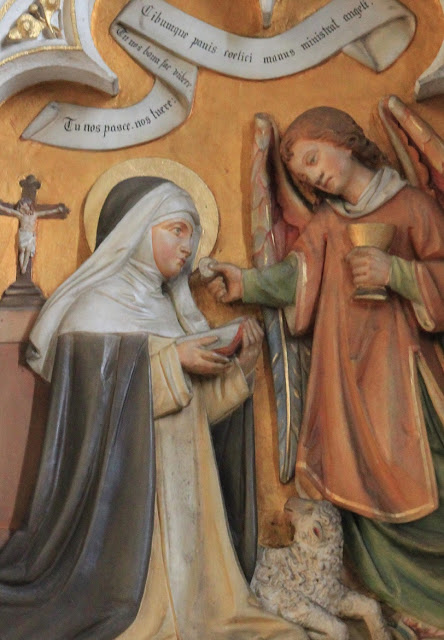 Agnes was born in 1268 into the noble Segni family in Gracciano, a frazione of Montepulciano, then part of the Papal States. At the age of nine, she convinced her parents to allow her to enter a Franciscan monastery of women They lived a simple, contemplative life. She received the permission of the Pope to be accepted into this life at such a young age, which was normally against Church law.

In 1281, the lord of the castle of Proceno, a fief of Orvieto, invited the nuns of Montepulciano to send some of their Sisters to Proceno to found a new monastery. Agnes was among the nuns sent to found this new community. At the age of fourteen she was appointed bursar. 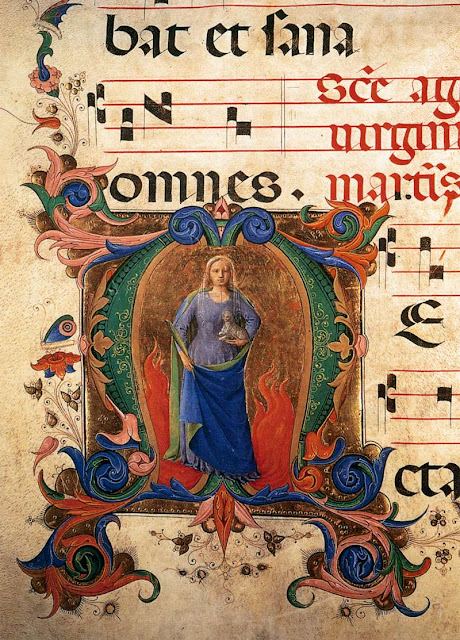 Zanobi Strozzi (17 November 1412 – 6 December 1468) was an Italian painter and manuscript illuminator, active in his native Florence and nearby Fiesole. He was closely associated with Fra Angelico. Most surviving works are manuscript illuminations, but several panel paintings survive, including six altarpieces and six panels with the Virgin and Child, as well as some designs for metalwork.

He was one of the most important illuminators in Florence in his day, and his contribution to eighteen manuscripts can be documented.

He was orphaned at the age of 15, and then lived with the artist Battista di Biagio Sanguigni, described as his "tutor". Some time between 1427 and 1430 the pair moved to Fiesole, some five miles from Florence.

He is not recorded as joining the artist's guild or Arte dei Medici e degli Speziali, meaning that he could not contract for paintings (as opposed to illuminations) under his own name within Florence. Vasari, in his biography of Fra Angelico, named him as a pupil, who had probably met him in the thirties at San Domenico, Fiesole, the master's base until 1436.


He is buried in Santa Maria Novella, Florence. More on Zanobi Strozzi

In 1288 Agnes, despite her youth at only 20 years of age, was noted for her devotion to the Blessed Sacrament and deep life of prayer, and was elected as the abbess of the community. There she gained a reputation for performing miracles; people suffering from mental and physical ailments seemed cured by her presence. She was reported to have "multiplied loaves", creating many from a few on numerous occasions, recalling the Gospel miracle of the loaves and fishes. She herself, however, suffered severe bouts of illness which lasted long periods of time.

In 1306, Agnes was recalled to head the monastery in Montepulciano. Agnes reached a high degree of contemplative prayer and is said to have been favored with many visions. After her return, she proceeded to build a church, Santa Maria Novella in Florence, to honor the Blessed Mother, as she felt she had been commanded to do in a mystical vision several years earlier. She also had a vision of St. Dominic Guzman, under the inspiration of which she led the nuns of her monastery to embrace the Rule of St. Augustine as members of the Dominican Order. She was frequently called upon to bring peace to the warring families of the city.

By 1316, Agnes' health had declined so greatly. She died the following 20 April, at the age of forty-nine. More on Agnes of Montepulciano 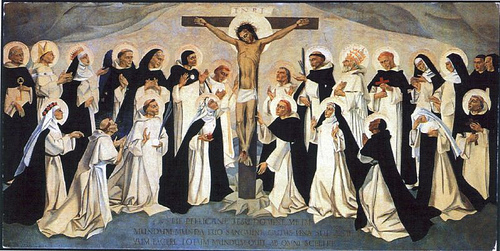 Artist unknown
Dominicans unite around the Cross of Jesus

Please note that the content of this post primarily consists of articles available from Wikipedia or other free sources online.
at April 20, 2020