07 Works, Today, May 26th is Saint Augustine of Canterbury's day, his story in Paintings #146 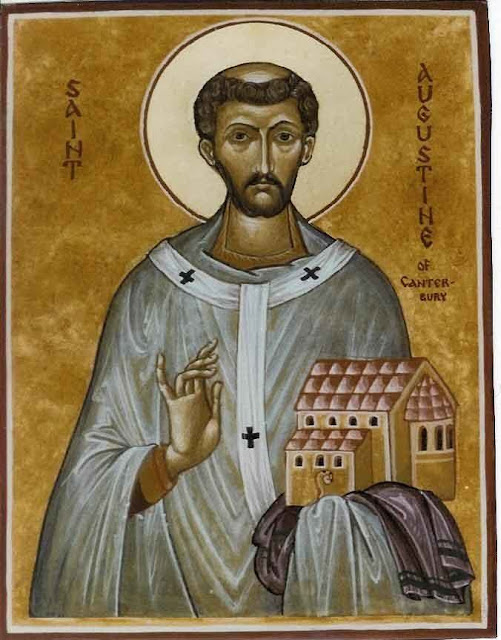 Saint Augustine of Canterbury, also called Austin, (born Rome?—died May 26, 604/605, Canterbury, Kent, England;) first archbishop of Canterbury and the apostle to England, who founded the Christian church in southern England. 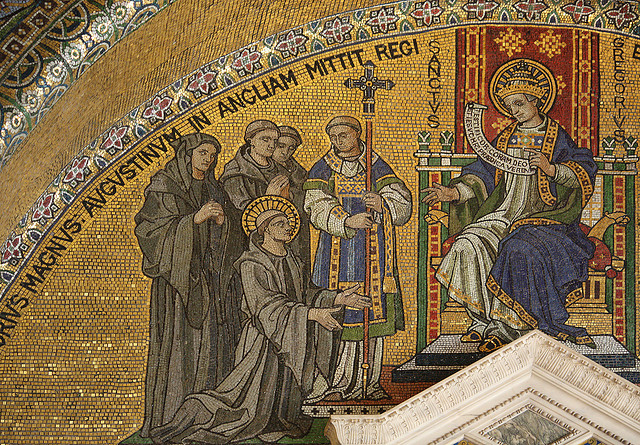 Augustine was prior of the Benedictine monastery of St. Andrew, Rome, when Pope St. Gregory I the Great chose him to lead an unprecedented mission of about 40 monks to England, which was then largely pagan. They left in June 596, but, arriving in southern Gaul, they were warned of the perils awaiting them and sent Augustine back to Rome. There Gregory encouraged him with letters of commendation (dated July 23, 596), and he set out once more. 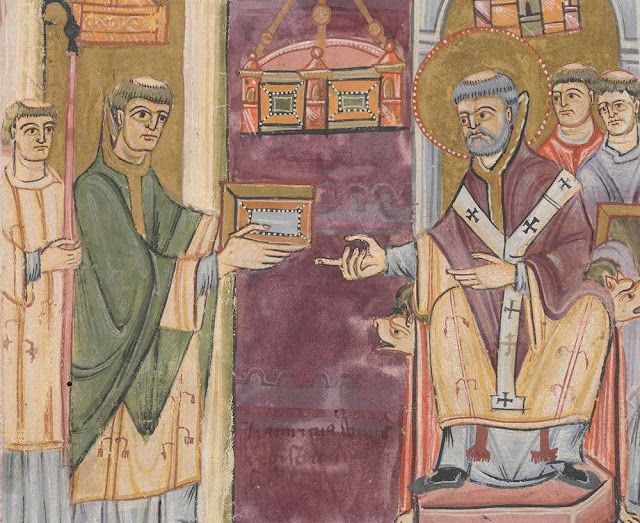 The Italian-born monk and his entourage arrived in the Kingdom of Kent in 597. 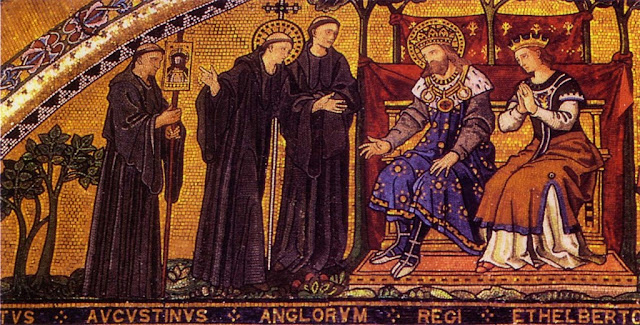 King Ethelbert of Kent and his Christian wife, Bertha, welcomed the missionaries 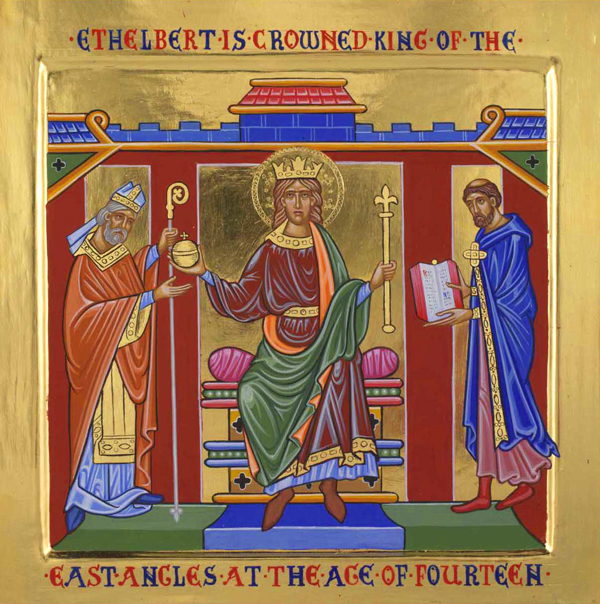 King Ethelbert of Kent (reigned circa 597-616) and his Frankish Christian wife, Bertha welcomed them; and gave the missionaries a dwelling place in Canterbury and the old St. Martin’s Church, where he allowed them to preach. 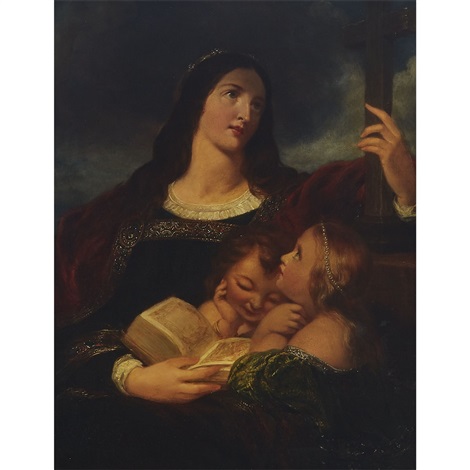 Edmund Thomas Parris (3 June 1793 – 27 November 1873) was an English history, portrait, subject, and panorama painter, book illustrator, designer and art restorer. He was appointed history painter to Queen Adelaide, Queen Consort of William IV, and painted Queen Victoria's coronation in 1838 and the Duke of Wellington's funeral in 1852. He supervised the painting of the huge panorama in the London Colosseum in Regent's Park, London, and was the inventor of "Parris's medium".

Parris showed an early talent for art and was placed with a Jewellers to learn enamel-painting and metal-chasing. During his apprenticeship, his leisure time was given to the study of mechanics, which subsequently proved to be of great use to him.

In 1816 he entered the schools of the Royal Academy.

A wholly different class of art, in which Parris gained a great temporary reputation, was the portrayal of female beauty, and he was for some years a fashionable portrait painter. In 1836 and 1838 three sets of plates from his drawings were published. In 1838 he was commissioned to paint a picture of the Queen's coronation. In 1852, he painted the Duke of Wellington's funeral.

Parris was a frequent exhibitor of historical and fancy subjects at the Royal Academy and British Institution from 1816 to the end of his life, and in 1832 received the appointment of historical painter to Queen Adelaide.

At one time Parris carried on a life-drawing school. He invented a medium which, when mixed with oil, produced a dull fresco-like surface; this was widely known as "Parris's Medium." More on Edmund Thomas Parris

Æthelbert's wife, Bertha, is revered in English and Christian history for her role in Æthelbert's conversion. Bertha was a Frankish princess and was already a Christian when she arrived in Kent, a few years before Augustine arrived.

With Aethelberht’s support, their work led to many conversions, including that of the King. In the following autumn Augustine was consecrated bishop of the English by St. Virgilius at Arles.

Thousands of Aethelberht’s subjects were reportedly baptized by Augustine on Christmas Day 597, and he subsequently dispatched two of his monks to Rome with a report of this extraordinary event and a request for further help and advice. They returned in 601 with more missionaries 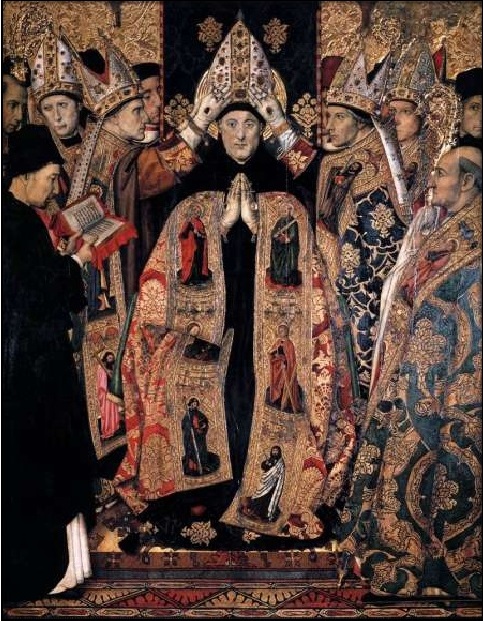 Augustine founded Christ Church, Canterbury, as his cathedral and the monastery of SS. Peter and Paul, which came to rank as the second Benedictine house in all Europe. Canterbury thus was established as the primatial see of England. In 604 he established the episcopal sees of London, consecrating Mellitus as its bishop, and of Rochester, consecrating Justus as its bishop.

At a conference with British bishops, Augustine tried in vain to unify the British (Celtic) churches of North Wales and the churches he was founding. A second conference, his last recorded act, proved equally fruitless. Augustine was buried at SS. Peter and Paul. More on Saint Augustine of Canterbury