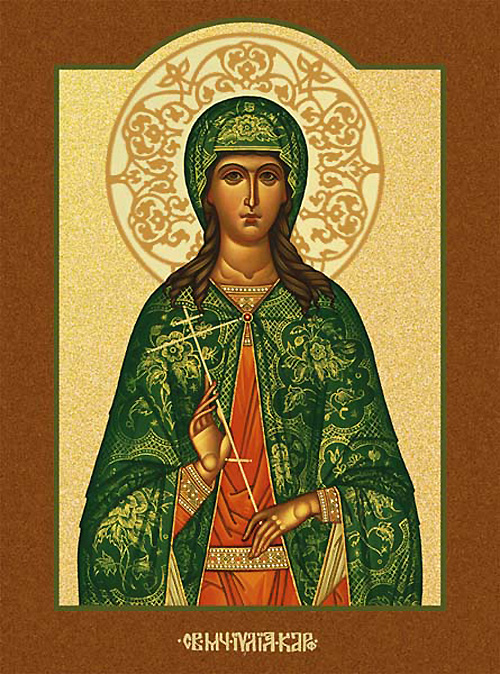 Julia was a Carthaginian girl who was sold as a slave, after Gaiseric captured Carthage in 439; and came into the service of a man named Eusebius. As a young and strong female, Julia brought a good price for the Vandals. 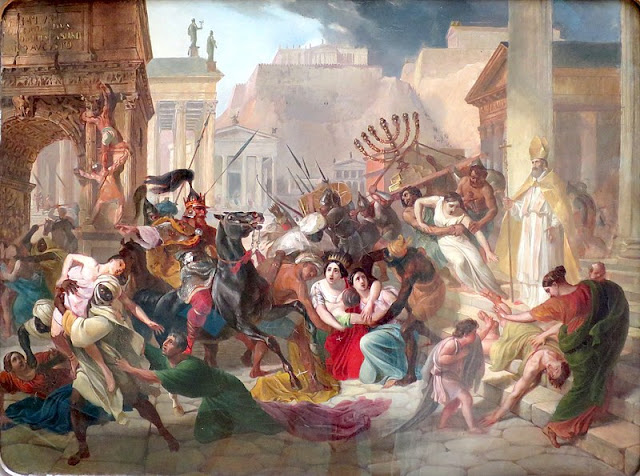 Bryullov was descended from French Huguenots, and his father was a sculptor. Bryullov was educated at the St. Petersburg Academy of Fine Arts (1809–21). He studied in Italy from 1823, painting his best-known work, the monumental “Last Day of Pompeii” (1830–33). Much of his continuing reputation rests on his more intimate portraits and his watercolours and travel sketches. More on Karl Bryullov 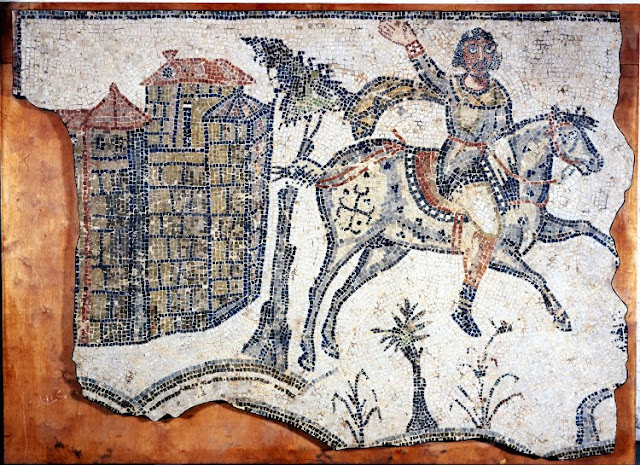 Even though Eusebius was a pagan he admired so great a virtue in service. When her own duties were done and she was granted the servant's time off, she spent her spare time either in reading or insisting on praying. She grew pale and thin from fasting despite the threats and blandishments of her master, but her mind, intent on Heaven, fed daily on God's words. 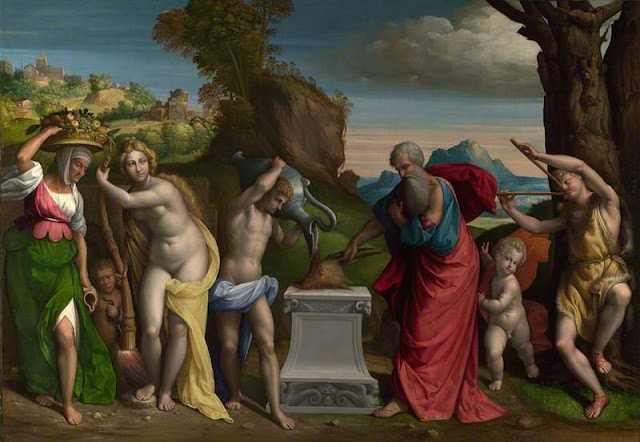 Benvenuto Tisi da Garofalo (1481 – September 6, 1559) was a Late-Renaissance-Mannerist Italian painter of the School of Ferrara. Garofalo's career began attached to the court of the Duke d'Este. His early works have been described as "idyllic", but they often conform to the elaborate conceits favored by the artistically refined Ferrarese court. His nickname, Garofalo, may derive from his habit of signing some works with a picture of a carnation.

Tisi is claimed to have apprenticed under Panetti.  In 1495 he worked at Cremona. He may have spent three years (1509–1512), in Rome. This led to a stylized classical style.

Invited to Rome, he worked briefly under Raphael in the decoration of the Stanza della Segnatura. From Rome family affairs recalled him to Ferrara; there Duke Alfonso I commissioned him to execute paintings. Thus the style of Tisi partakes of the Lombard, the Roman and the Venetian modes.

He continued constantly at work until in 1550 blindness overtook him, painting on all feast-days in monasteries for the love of God. He had married at the age forty-eight, and died at Ferrara on the 6th (or 16th) of September 1559, leaving two children. More on Benvenuto Tisi da Garofalo


Eusebius, a citizen of Syria in Palestine, rowing hard for Gaul with an expensive cargo, anchored at Cap Corse for the night. From a distance he saw that sacrifices were about to be conducted by the pagans and immediately descended with all his people to attend.

While they were celebrating by becoming intoxicated and Saint Julia was sighing deeply for their error it was announced to Felix by his satellites that there was a girl in the ship who derided the worship of the gods. This "son of the serpent" asked Eusebius, "Why did not all who are with you come down to worship our gods? I heard that there is a girl who derides the names of our gods." Eusebius replied "I was not successful in moving the girl from the superstition of the Christians nor was I able to bring her to our religion by threatening. If she were not necessary because of her most faithful service I would already have had her tortured."


Then Felix Saxo gave him some options: "Either compel her to give offerings to our gods, or give her to me in exchange for whichever four of my handmaidens please you, or for the price that was set for her." Eusebius replied: "If you wanted to give me all your property it would not come to the value of her service."

Felix Saxo was a major, or "magistrate" among the sacrificers, "who happened to be in charge of the place".

Felix Saxo did not just take the girl by eminent domain as the penalty for disrespecting the rights of Roman citizens was severe, and the girl was the property of Eusebius. He could do as he liked with her. However, disrespecting the state gods was a crime punishable by death, which the magistrate could only overlook at his own risk. 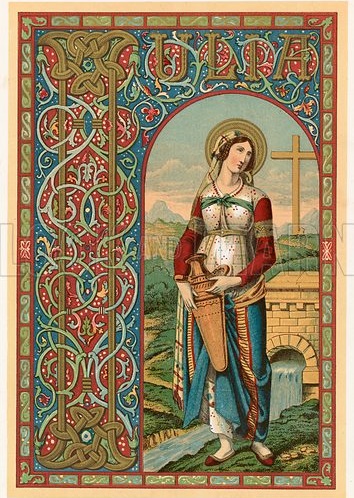 Felix Saxo  prepared a banquet, where Eusebius became intoxicated and fell into a deep sleep. Straightway "a raging mob of gentiles" boarded the ship and placed Julia on the shore. Felix said: "Sacrifice to the gods, girl. I will give your master as much as he likes and dissolve the bond of your state."

Julia replied: "My liberty is the service of Christ, whom I serve every day with a pure mind. As for that error of yours, I not only do not venerate it, I detest it." 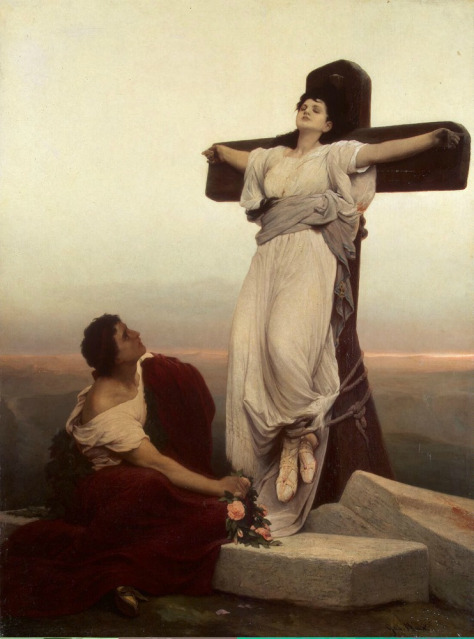 
Gabriel Cornelius Ritter von Max (ennobled in 1900; 23 August 1840 – 24 November 1915) was a Prague-born Austrian painter, the son of the sculptor Josef Max and Anna Schumann. He studied at the Prague Academy of Arts. His studies included parapsychology, Darwinism, Asiatic philosophy, the ideas of Schopenhauer, and various mystical traditions. He continued his studies at the Viennese Academy of Art. From 1863 to 1867 he studied at the Munich Academy. His first critical success was in 1867 with the painting “Martyr at the Cross”: that painting transformed the “Unglücksmalerei” (dark palette) of Piloty into a religious-mystical symbolism using a psychological rendering of its subject.

He continued to use the dark palette of the Piloty school well into the 1870s, later moving toward a more muted palette, using fewer, clearer colors. From 1869, Gabriel von Max had his studio in Munich. From 1879-1883, Gabriel Max was a professor of Historical Painting at the Munich Academy; he also became a Fellow of The Theosophical Society. In 1900 he was ennobled and became a Ritter. He died in Munich in 1915. More Gabriel von Max
The tribune ordered that she be struck blows to the face. That done, she said that as Christ was struck for her, why should she not be struck for him? Then "the most cruel serpent" ordered that she be "tortured by the hair". Then she was flogged, to which she replied in the same way, that if Christ was flogged and crowned with thorns for her, why should she not endure this diminishment of the hair. 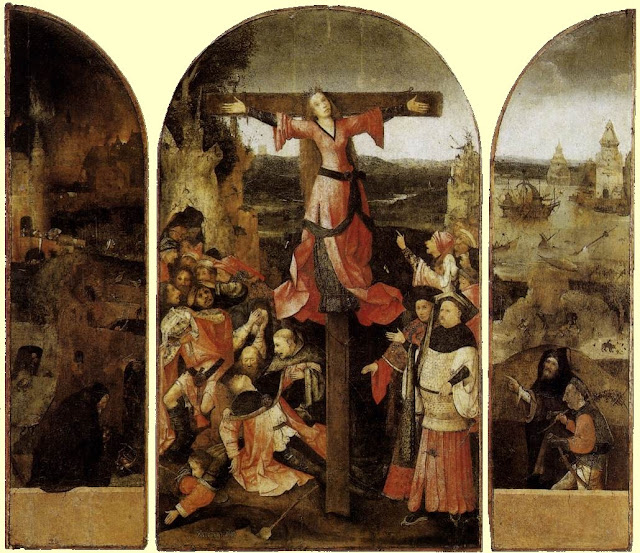 Hieronymus Bosch (c. 1450 – 9 August 1516) was an Early Flemish painter. His work is known for its fantastic imagery, detailed landscapes, and illustrations of religious concepts and narratives. Within his lifetime his work was collected in the Netherlands, Austria, and Spain, and widely copied, especially his macabre and nightmarish depictions of hell.

Little is known of Bosch's life, though there are some records. He spent most of it in the town of 's-Hertogenbosch, where he was born in his grandfather's house. The roots of his forefathers are in Aachen, in present-day Germany. His pessimistic and fantastical style cast a wide influence on northern art of the 16th century, with Pieter Bruegel the Elder being his best known follower. His paintings have been difficult to translate from a modern point of view; attempts to associate instances of modern sexual imagery with fringe sects or the occult have largely failed. Today he is seen as a hugely individualistic painter with deep insight into humanity's desires and deepest fears. Attribution has been especially difficult; today only about 25 paintings are confidently given to his hand along with 8 drawings. Approximately another half dozen paintings are confidently attributed to his workshop. His most acclaimed works consist of a few triptych altarpieces, the most outstanding of which is The Garden of Earthly Delights. More Hieronymus Bosch

The "serpent", fearful of being indicted for cruelty, hurried the process along by ordering "the handmaiden of Christ" to be placed on the patibulum of a cross. Eusebius was awakened. As he let go the bonds of sleep, the saint, with mind released from the flesh, victress over suffering, took happy flight with the angels to the stars of heaven. More ob Saint Julia