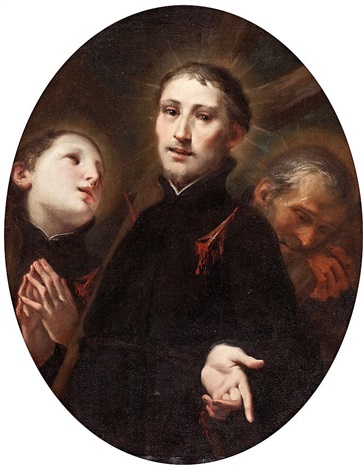 Giuseppe Maria Crespi (March 14, 1665 – July 16, 1747), was an Italian late Baroque painter of the Bolognese School. His eclectic output includes religious paintings and portraits, but he is now most famous for his genre paintings.

By age 12 years, he apprenticed with Angelo Michele Toni (1640–1708). From the age of 15–18 years, he worked under the Bolognese Domenico Maria Canuti. Carlo Cignani invited Crespi in 1681–82 to join an Accademia del Nudo for the purpose of studying drawing, and he remained in that studio until 1686, when Cignani relocated to Forlì and his studio was taken over by Canuti's most prominent pupil, Giovanni Antonio Burrini. From this time hence, Crespi worked independently of other artists.


He journeyed to Venice, but surprisingly, never to Rome. Bearing his large religious canvas of Massacre of the Innocents and a note from Count Vincenzo Rannuzi Cospi as an introduction, Crespi fled in the middle of the night to Florence in 1708, and gained the patronage of the Grand Duke Ferdinand I de' Medici.

Crespi was a portrait painter and a brilliant caricaturist, and was also known for his etchings. He could be said to have painted a number of masterpieces in different styles. He painted few frescoes. More on Giuseppe Maria Crespi

Blessed Rodolfo Acquaviva (born on 2 October 1550), was an Italian Jesuit missionary and priest in India who served the court of Akbar the Great from 1580 to 1583. He was martyred in 1583 and beatified in 1893.

Rodolfo Acquaviva was the son of Giangirolamo Acquaviva, 10th Duke of Atri. He was the great-grandson of Andrea Matteo Acquaviva, condottiere and man of letters. 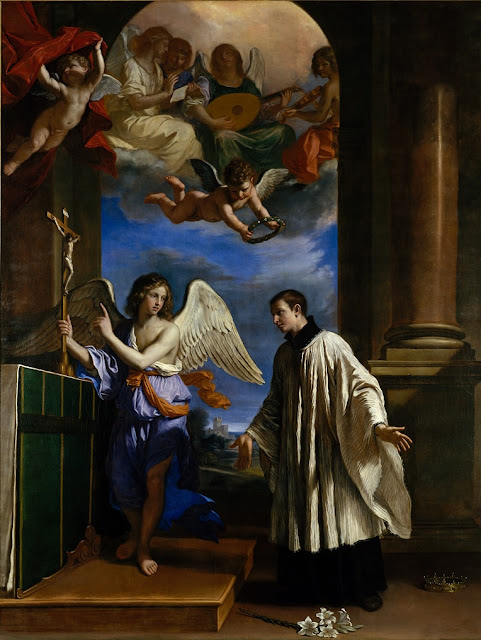 Giovanni Francesco Barbieri (February 8, 1591 – December 22, 1666), best known as Guercino, was an Italian Baroque painter and draftsman from the region of Emilia, and active in Rome and Bologna. The vigorous naturalism of his early manner is in contrast to the classical equilibrium of his later works. His many drawings are noted for their luminosity and lively style.

Mainly self-taught, at the age of 16, he worked as apprentice in the shop of Benedetto Gennari, a painter of the Bolognese School. By 1615, he moved to Bologna, where his work was praised by Ludovico Carracci. Guercino painted two large canvases, Elijah Fed by Ravens and Samson Seized by Philistines, for Cardinal Serra, a Papal Legate to Ferrara. These paintings have a stark naturalist Caravaggesque style, although it is unlikely that Guercino saw any of the Roman Caravaggios first-hand.


Guercino's early works are often tumultuous. He often claimed that his early style was influenced by a canvas of Ludovico Carracci that he saw in the Capuchin church in Cento. Some of his later works are closer to the style of his contemporary Guido Reni, and are painted with more lightness and clearness. More on Guercino

Rodolfo belonged to a powerful and illustrious family of Germanic origin settled in the Kingdom of Naples since the twelfth century. His mother was Marguerite Pio; on his mother's side he was a cousin of St. Aloysius Gonzaga.

In April 1658, inspired by the example of his uncle Claudio Acquaviva who later became the 5th General of the Jesuits, he too joined the Society of Jesus. He became a novice at Sant'Andrea al Quirinale in Rome. After completing his studies Acquaviva was chosen by his superiors for the prestigious and challenging Indian missions. He then travelled to Lisbon, starting point for the voyage east. There he was ordained a priest and sailed for India in 1578. 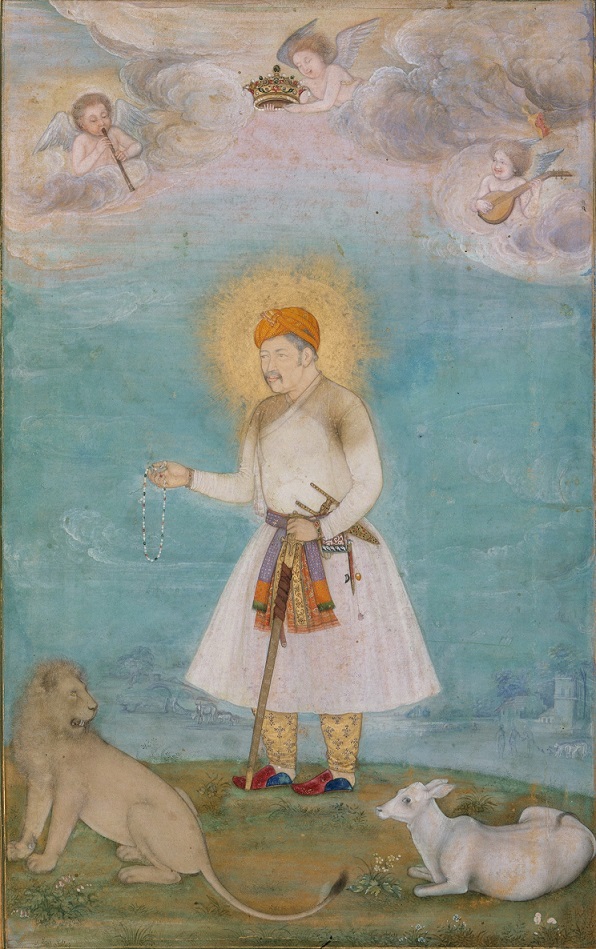 This posthumous portrait of Akbar incorporates the Elizabethan-derived motif of a lion and calf living in peace under the emperor’s benign rule. Govardhan, a master of psychological portraiture, has given the calf an air of meek nervousness, as expressed in its sideways glance and lowered ears, due no doubt to the proximity of the lion’s visible teeth. Cherubs above and a Netherlandish background add cosmopolitan touches in vogue at the time. More on this work

Govardhan (fl. 1595–1640) was a noted Indian painter of the Mughal school of painting. Like many other Mughal painters, they were Hindus. He joined the imperial service during the reign of Akbar and he continued his work till the reign of Shah Jahan. The examples of his work survived till date show that he was fond of rich, sensuous colour and softly modeled forms.


Govardhan was one of the illustrators of the Baburnama currently located in the British Museum, London. The Jahangir celebrating the festival of Ab-Pashi (1615), presently kept in the Raza Library in Rampur, India is one of his significant creations. The portraits created by him in the Jahangir albums are presently in the collections of various American and European museums. He depicted the different human physiques of the Indians with much accuracy. An excellent portrait of him was prepared by one of his contemporary painter, Daulat. More on Govardhan

At first he taught at Saint Paul's College, Goa but was then assigned as the leader of a mission to the court of the Grand Mughal Akbar (1542–1605) who had requested missionaries be sent. 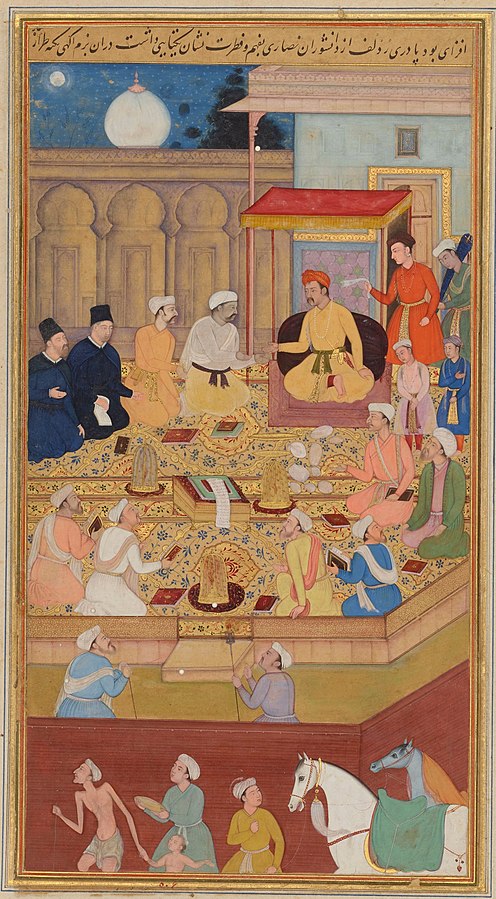 Nar Singh
Jesuits at Akbar's court, ca. 1605
Akbarnama, miniature painting
I have no further description of this artwork at this time

The two men dressed in black are the Jesuit missionaries Rodolfo Acquaviva and Francisco Henriques.

The Akbarnama was commissioned in 1589 by Akbar. It was written in Persian by Abu'l Fazl between 1590 and 1596. This incomplete copy of the text was illustrated by royal artists as the historian wrote and revised his work. After Akbar's death in 1605, the folios remained in the library of his son, Jahangir (r. 1605-1627) and later Shah Jahan (r.1628-1658). The Victoria and Albert Museum purchased them in 1896 from Mrs Frances Clarke, the widow of Major-General John Clarke, who had bought it in India while serving as Commissioner of Oudh between 1858 and 1862.

In his new palace in Fatehpur Sikri Akbar built the Ibadat Khana (House of Worship) where he invited leaders of the Muslim, Hindu and other religions to debate points of religious truth. Akbar was interested in founding a new pantheistic religion with elements from different traditions and his new faith was called Din-i-Ilahi ("Faith of the Divine"). 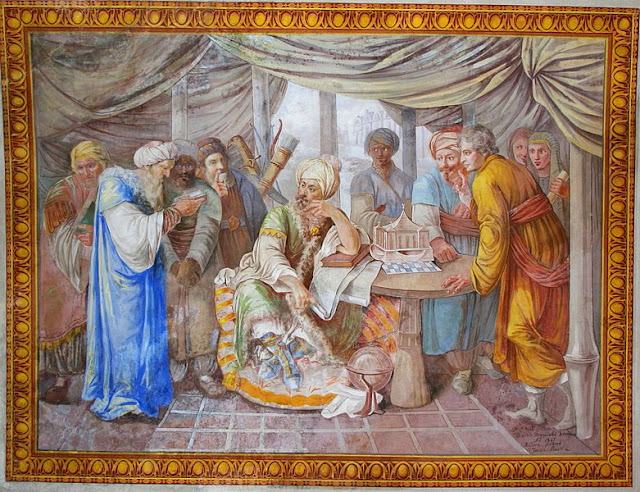 Unknown artist
Rodolfo Acquaviva (on the right in yellow robe) discusses with the Grand Mughal, c. 1847
I have no further description of this artwork at this time

Although Acquaviva came equipped with the Bible translated into many different languages, and was the object of Akbar's sympathetic personal attention, the Jesuit felt his efforts were fruitless, one obstacle being the ruler's repugnance to monogamy, and after three years, decided to withdraw, though other Jesuits maintained the mission at the courts of the Mughal Emperors and in Agra for the next two centuries.

This faith, however, was not for the masses. In fact, the only "converts" to this new religion were the upper nobility of Akbar's court. Historians have so far been able to identify only 18 members of this new religion.

Upon his return to Goa as part of his missionary commitments he led a mission to the Hindu Kshatriyas of Salcette, south of Goa. 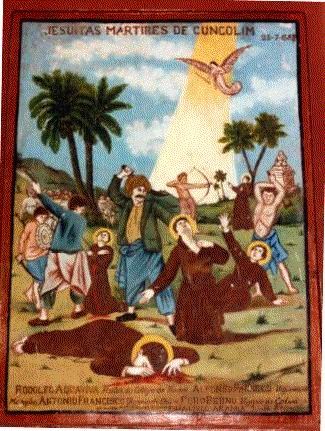 Unknown artist
Cuncolim Martyrs, July, 25, 1583
I have no further description of this artwork at this time 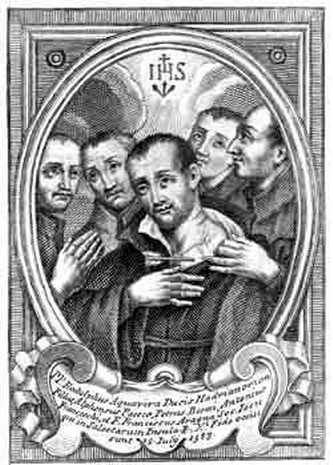 Unknown artist
Rodolfo Acquaviva and Companions, Martyrs in India, c. 1650
I have no further description of this artwork at this time

Rodolfo Acquaviva was part of the group of five Jesuit martyrs in the former possession of Gôa, today India, who are celebrated under the name of "Martyrs of Salsette", from the name of the Mission located in the said Indian peninsula.
They are:
- Rodolfo Acquaviva (1550-1583) covered by this sheet;
- Alfonso Pacheco, Spanish of Castile (1551-1583);
- Antonio Francisco, Portuguese of Coimbra (1553-1583);
- Francesco Aranha, Portuguese coadjutor, (1550? -1583);

This was seen as a provocation by the local community some of whose temples had already been destroyed by Jesuits and Portuguese troops. It incited the Cuncolim Revolt of July, 1583. Acquaviva was murdered opening his collar to the scimitar of his assassin and calling to God. More on Rodolfo Acquaviva

Thank you for visiting my blog and also for liking its posts and pages.
Please note that the content of this post primarily consists of articles available from Wikipedia or other free sources online.