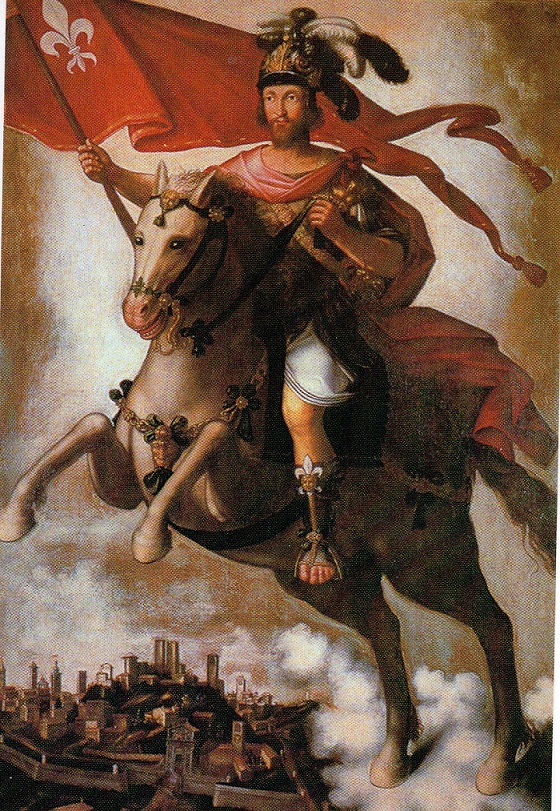 Saint Alexander of Bergamo (died c. 303) is the patron saint of Bergamo, as well as Capriate San Gervasio and Cervignano d'Adda. Alexander may simply have been a Roman soldier or resident of Bergamo who was tortured and killed for not renouncing his Christian faith. Details of his life are uncertain, but subsequent Christian stories consider him a centurion of the Theban Legion commanded by Saint Maurice.

In the year 286, a legion of soldiers, consisting of six thousand six hundred and sixty-six men, contained none but Christians. This legion was called the Theban Legion, because the men were Egyptian Christian Copts who had been recruited from and stationed in Thebias in Upper Egypt.  The Theban Legion were quartered in the east until the emperor Maximian ordered them to march to Gaul, to assist him against the rebels of Burgundy. It was the custom of the Romans to move troops from extreme parts of the empire to avoid the problem of Roman-trained soldiers participating in uprisings to free their native lands. More on Theban Legion 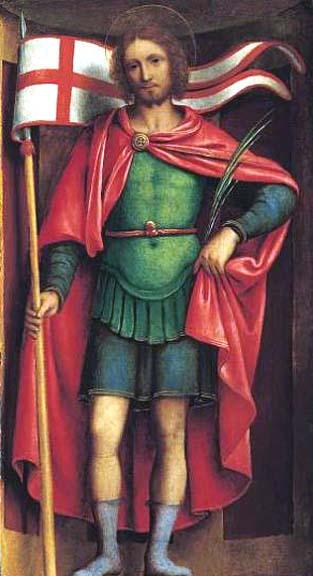 Bernardino Luini, (1475–1532)
San Alessandro/Saint Alexander of Bergamo, circa 1525
I have no further description of this artwork at this time

Bernardino Luini (c. 1480/82 – June 1532) was a North Italian painter from Leonardo's circle. Both Luini and Giovanni Antonio Boltraffio were said to have worked with Leonardo directly; he was described to have taken "as much from Leonardo as his native roots enabled him to comprehend". Consequently, many of his works were attributed to Leonardo. He was known especially for his graceful female figures with elongated eyes, called Luinesque by Vladimir Nabokov. More on Bernardino Luini 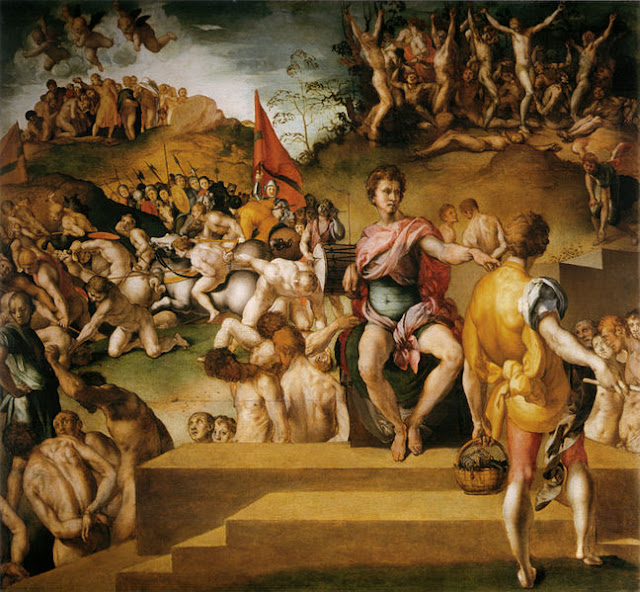 Jacopo Carucci (May 24, 1494 – January 2, 1557), usually known as Jacopo da Pontormo, Jacopo Pontormo or simply Pontormo, was an Italian Mannerist painter and portraitist from the Florentine School. His work represents a profound stylistic shift from the calm perspectival regularity that characterized the art of the Florentine Renaissance. He is famous for his use of twining poses, coupled with ambiguous perspective; his figures often seem to float in an uncertain environment, unhampered by the forces of gravity.

Carucci an orphaned boy, "young, melancholy and lonely", was shuttled around as a young apprentice.


He had not been many months in Florence when Bernardo Vettori sent him to stay with Leonardo da Vinci, and then with Mariotto Albertinelli, Piero di Cosimo, and finally, in 1512, with Andrea del Sarto.

Pontormo painted in and around Florence, often supported by Medici patronage. A foray to Rome, largely to see Michelangelo's work, influenced his later style. Haunted faces and elongated bodies are characteristic of his work.


In the earlier work, Pontormo is much closer in style to his teacher, Andrea del Sarto, and to the early sixteenth century renaissance artistic principles. Moreover, the clear architectural setting that is carefully constructed in earlier piece has been completely abandoned in favor of a peculiar nondescript urban setting.

Pontormo took part in the fresco decoration of the salon of the Medici country villa at Poggio a Caiano. There he painted frescoes in a pastoral genre style.

In 1522, when the plague broke out in Florence, Pontormo left for the Certosa di Galluzzo, a cloistered Carthusian monastery where the monks followed vows of silence. He painted a series of frescoes, now quite damaged, on the passion and resurrection of Christ. More on Jacopo Carucci

Prior to the commencement of the Diocletianic Persecution in 303, both Galerius and Maximian in the West inaugurated, on their own responsibility, a crusade against Christianity and sought particularly to remove all Christians from the armies.

St. Alexander was one of the victims of this persecution. He is reputed to have been a survivor of the decimation (the killing of every tenth man) ordered against the Theban Legion. He escaped to Milan. 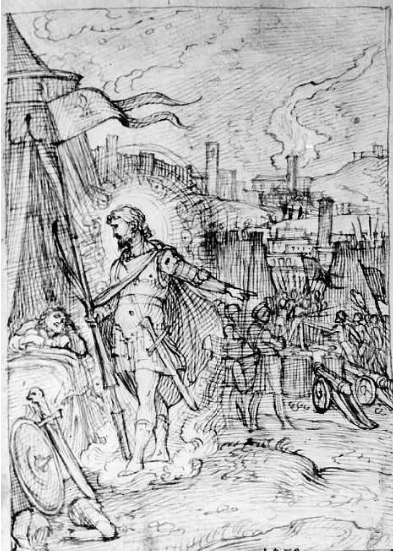 A warrior saint in armor holds a banner, and appears outside the tent of a sleeping soldier. Soldiers and cannon are in the right background. A town or city is in teh distant right background. More on this work

Enea Salmeggia (c. 1556 – 23 February 1626) was an Italian painter of the late-Renaissance period, active mainly in his native city of Bergamo.

He was also known as Il Talpino. He trained with members of the Campi family, and later with members of the Procaccini family in Milan. For the church of the Passion in Milan, he painted a Christ’s Agony in the Garden and a Flagellation. His Virgin and child with saints Roch and others is found in the Brera Gallery. An Adoration of the Magi (1595) was painted for Santa Maria Maggiore, Bergamo. He painted a Deposition for San Leonardo de’ Padri Somaschi. He also painted a Madonna enthroned with San Domenico and others for the church of Santa Marta. The parish church of San Martino in Nembro has 27 paintings by him. More on Enea Salmeggia

At Milan, he was recognized and imprisoned, and it was demanded that he renounce his Christian faith. However, he was visited in jail by Saint Fidelis and Bishop Saint Maternus. Fidelis managed to organize Alexander's escape. Alexander fled to Como but was captured again. 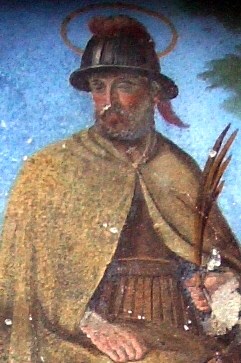 Saint Fidelis of Como was a Christian soldier in the imperial Roman army. Martyred in the persecutions of Maximian Herculeus.

Brought back to Milan, he was once more condemned to death by decapitation, but during the execution the executioner's arms went stiff. He was imprisoned again, but Alexander once again managed to escape, and ended up in Bergamo. At Bergamo, he was the guest of the lord Crotacius, who bid him to hide from his persecutors. However, Alexander decided to become a preacher instead and converted many natives of Bergamo. 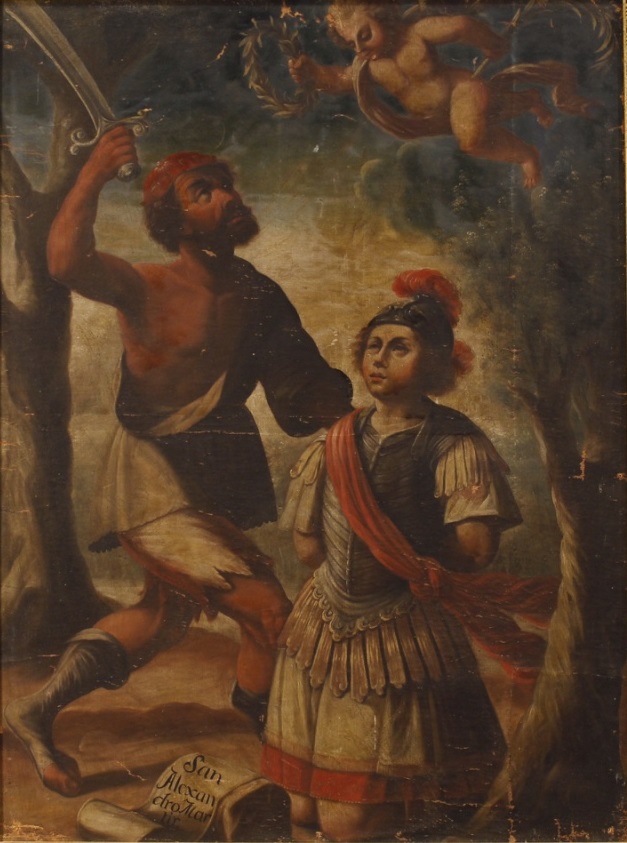 Alexander was once again captured and was finally decapitated on August 26, 303, on the spot now occupied by the church of San Alessandro in Colonna. More on Saint Alexander of Bergamo 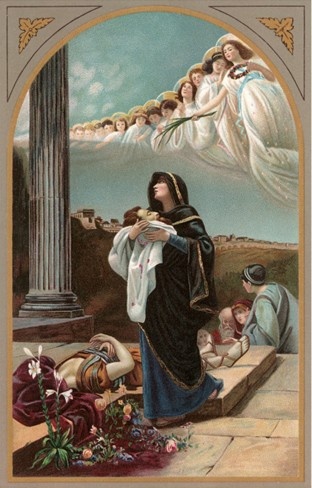 Ponziano Loverini (July 6, 1845 – August 21, 1929) was an Italian painter, known primarily for his canvases and frescoes of sacred subjects.

Born in Gandino he was helped by his uncle to enroll at the Accademia Carrara in Bergamo. A stipend from the city of Gandino sponsored his art study. In 1881, he exhibited at Milan; and in 1884 at Turin. . In 1887 at Venice.

Loverini also painted some portraits, watercolors. and studies of various genres. Among his fresco work, he painted the four biblical figures: Job, Ezekiel, Jeremiah, and Tobit. In 1887 he began a cycle of frescoes depicting the Story of St Peter for the parish church of Trescore Balneario. He also frescoed in the Basilica of San Pietro in Ciel d'Oro. From 1888 and in 1893, he completed five large canvases for the Sanctuary of the Madonna del Rosario of Pompei.

In 1893, he became an associate of the Atheneum of Bergamo. In 1895, he was one of the founders of the Bergamese Artists’ circle, and named a member of the "Commission to Conserve Monuments" for the Province of Bergamo. Finally in 1899, he was designated director of the School of Painting of the Accademia Carrara, a post he held till 1926, when he resigned due to ill healthHe died in 1929 in Gandino. More on Ponziano Loverini

Please note that the content of this post primarily consists of articles available from Wikipedia or other free sources online.
at July 10, 2020