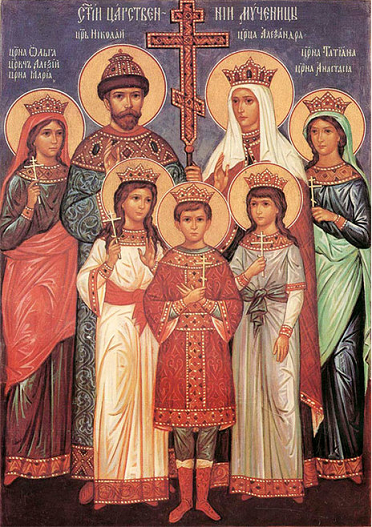 Unknown artist
Nicholas II, Tsar, and his family, Royal martyrs
I have no further description of this artwork at this time

The canonization of the Romanovs was the elevation to sainthood of the last Imperial Family of Russia – Tsar Nicholas II, his wife Tsarina Alexandra, and their five children Olga, Tatiana, Maria, Anastasia, and Alexei, by the Russian Orthodox Church. The family was killed by the Bolsheviks on 17 July 1918. 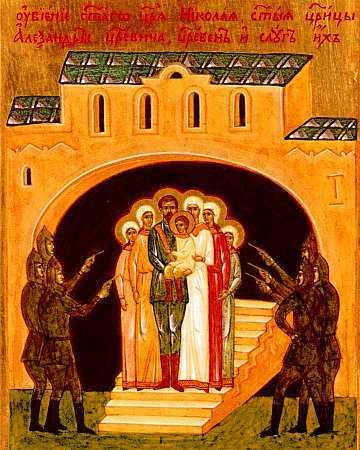 Unknown artist
The detention of the Imperial Family, lasted more than a year
I have no further description of this artwork at this time 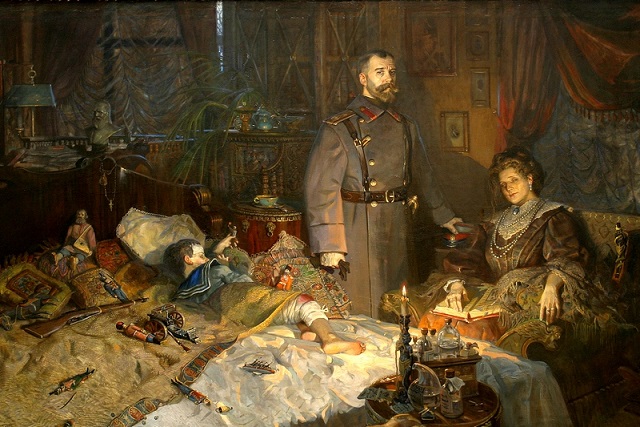 Nicholas II, and his family, were held under house arrest in the Alexander Palace at Tsarkoe Selo near Petrograd.

Ryzhenko Pavel Viktorovich was born in 1970 in the Northwestern Russian city of Kaluga. He served in the Soviet then later Russian military 1988-1990, as part of an elite guards airborne unit. At age 20 he entered the Russian Academy of Painting, Sculpture and Architecture for a six year course of study that left him a professor of art. Starting in 1997 he taught at the academy focusing on architecture, restoration and composition.

However, he soon took to painting historical military scenes, typically Russian in origin.

In poor health at just age 44, he donated all of his paintings to the Russian government before he died of a stroke in the summer of 2014. He is criticized by some as being a revisionist of the Monarchist era history of the Old Russian Empire. More on Ryzhenko Pavel Viktorovich

The executioners entered the room and read out the order for their execution. Saints Nicholas and Alexandra died under the hail of bullets, but the children did not die right away. They were stabbed and clubbed with the butts of rifles. 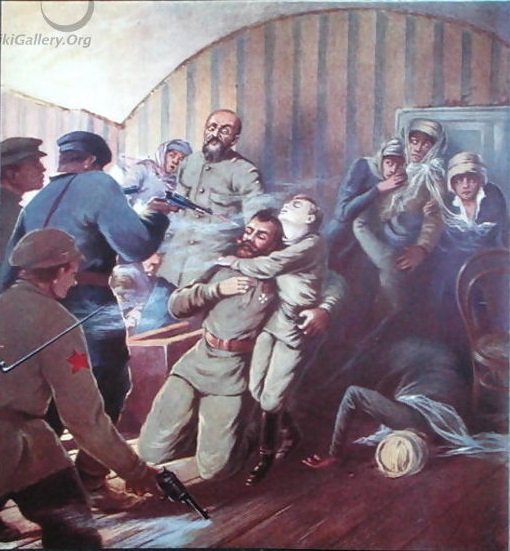 H. de Weindel, 1923-24
Execution of Tsar Nicholas II, 17th July 1918
I have no further description of this artwork at this time

Their bodies were taken to an abandoned mine, cut into pieces, then piled in front of the mine. Sulphur and gasoline were poured on the bloody mound and set on fire. When the fire went out two days later, whatever remained of the bodies was thrown into the mine and grenades were tossed into it. Then the ground was plowed so that no trace of the disposal of the bodies remained. 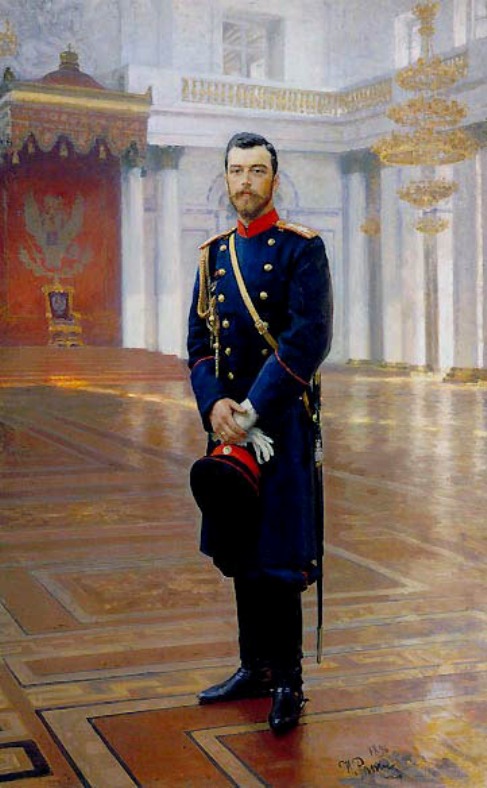 Ilya Yefimovich Repin (5 August 1844 – 29 September 1930) was the most renowned Russian artist of the 19th century. He played a major role in bringing Russian art into the mainstream of European culture. His major works include Barge Haulers on the Volga (1873), Religious Procession in Kursk Province (1883) and Reply of the Zaporozhian Cossacks (1880–91).

Repin was born in Chuguyev, in the Kharkov Governorate (now Ukraine) of the Russian Empire into a military family. He entered military school in 1854 and in 1856 studied under Ivan Bunakov, a local icon painter. He began to paint around 1860. In 1874–1876 he showed at the Salon in Paris and at the exhibitions of the Itinerants' Society in Saint Petersburg. He was awarded the title of academician in 1876.

In 1901 he was awarded the Legion of Honour. In 1911 he traveled to the World Exhibition in Italy, where his painting 17 October 1905 and his portraits were displayed in their own separate room. In 1916 Repin worked on his book of reminiscences, Far and Near. He welcomed the Russian Revolution of 1917. Celebrations were held in 1924 in Kuokkala to mark Repin's 80th birthday, followed by an exhibition of his works in Moscow. In 1925 a jubilee exhibition of his works was held in the Russian Museum in Leningrad. Repin died in 1930 and was buried at the Penates. More on Ilya Yefimovich Repin 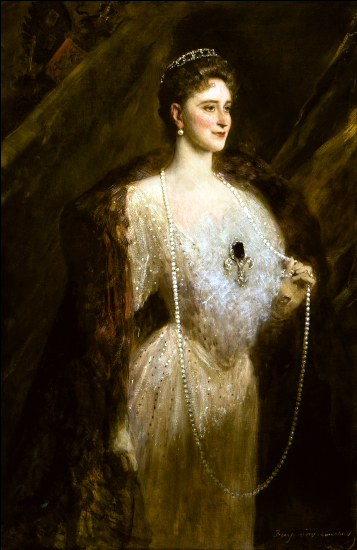 Jean-Joseph Benjamin-Constant, born Jean-Joseph Constant (10 June 1845 – 26 May 1902), was a French painter and etcher best known for his Oriental subjects and portraits. He was born in Paris and studied at the Ecole des Beaux-Arts in Toulouse. A journey to Morocco in 1872 strongly influenced his early artistic development and lead him to produce Romantic scenes under the spell of Orientalism. He received a medal in 1876.

After 1880, he changed his manner, devoting himself to mural decorations. He was distinguished as a portrait painter, especially in England, where he was a favorite of the aristocracy. His portrait Mons fils André (Luxembourg) was awarded a medal of honor at the Salon in 1896.

He was made a member of the Institute in 1893, and was a commander of the Legion of Honor. He visited the United States several times, and painted a number of portraits. The Metropolitan Museum of Art in New York owns a large mural decoration by Benjamin-Constant entitled Justinian in Council.

He also was a writer of repute, contributing a number of studies on contemporary French painters. He died in Paris on 26 May 1902. More on Jean-Joseph Benjamin-Constant 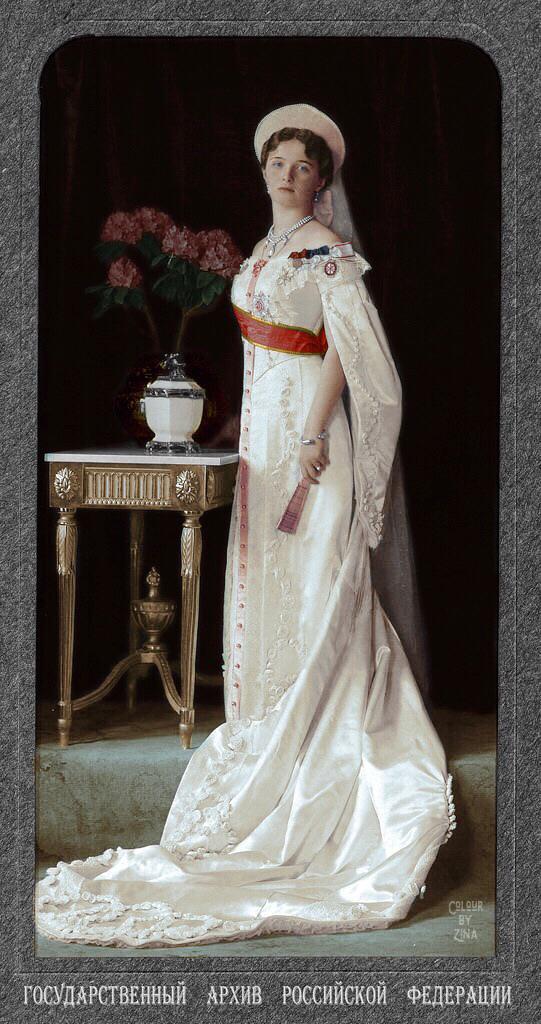 Unknown artist
The Grand Duchesses Olga Nikolaevna, wearing court dress including sashes and veils
I have no further description of this artwork at this time 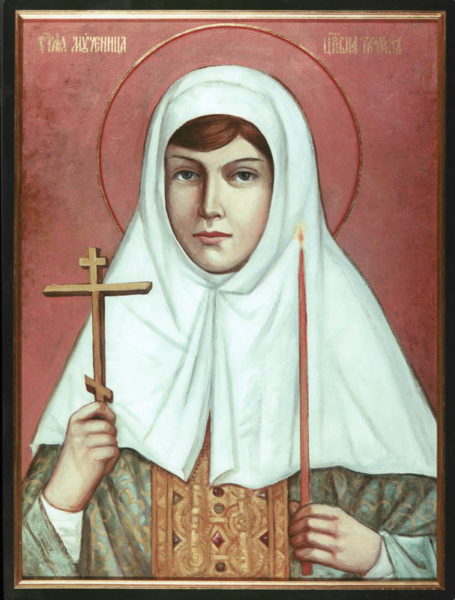 Unknown artist
St Tatiana (Romanova), New Martyr, Grand Duchess of Russia
I have no further description of this artwork at this time 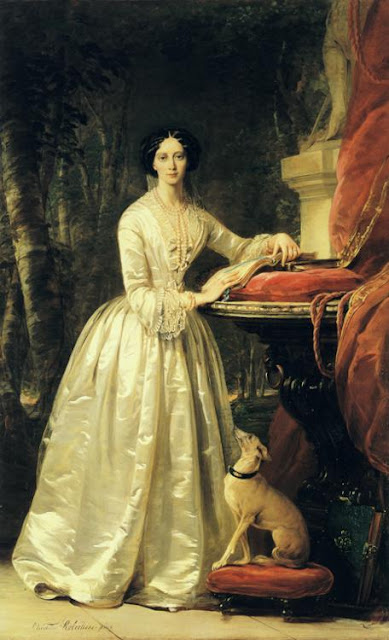 Christina Robertson RSA or Christina Saunders (17 December 1796 – 30 April 1854) was a Scottish artist who became a Russian court painter. She was the first woman honorary member of the Royal Scottish Academy.

Sanders was a successful portrait painter and she rapidly established a flow of commissions initially from Scottish patrons for her miniatures but later for oil and watercolour paintings. By 1823 she was married to James Robertson and exhibiting at the Royal Academy. The following year she became the first honorary woman member of the Royal Scottish Academy.

She worked in Paris in the mid 1830s and she was tempted to St Petersburg. Robertson was in St Petersburg from 1839 to 1841 where she carried out full length painting of Empress Alexandra and her three daughters - Maria, Olga and Alexandra. In 1841 she was made an honorary member of the Imperial Academy of Arts. 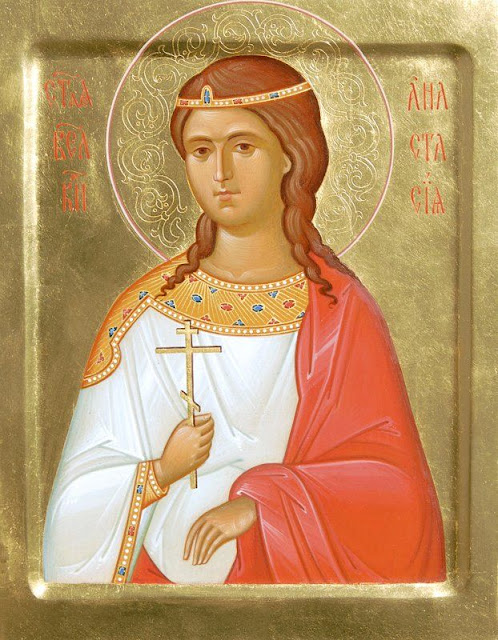 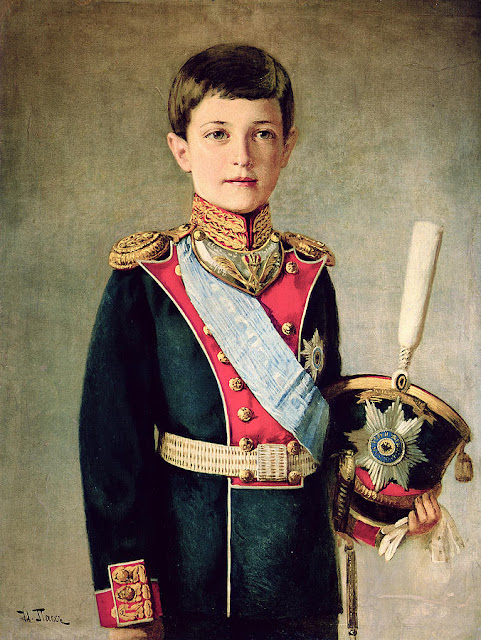 Israel Abramovich
Tsarevich Alexei Nikolaevich of Russia (1904-1918)
State Open-air Museum Tsarskoye Selo, St. Petersburg
I have no further description of this artwork at this time

Their servants, who had been killed along with them, were also canonized. All were canonized as victims of oppression by the Bolsheviks. 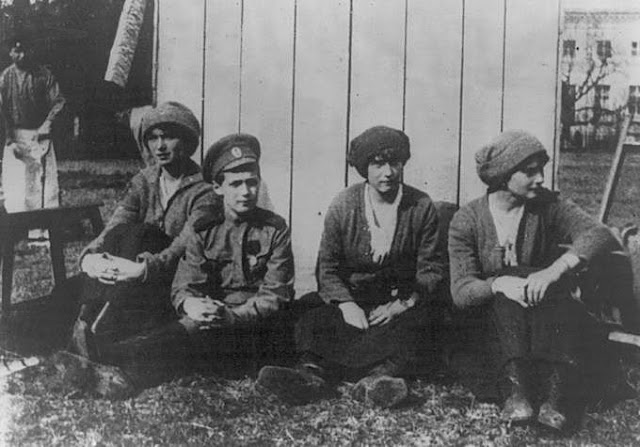 Unknown artist
The Tzar's children, also in captivity
Resting after working in the garden at Tsarskoe Selo
I have no further description of this artwork at this time

In 1992, Grand Duchess Elizabeth Fyodorovna and Varvara Yakovleva were canonized as New-Martyr Elizabeth and New-Martyr Barbara by the Moscow Patriarchate of the Russian Orthodox Church. The grand dukes and others killed with them were not canonized.

On 20 August 2000, after much debate, the Romanov family was canonized as passion bearers by the Moscow Patriarchate.

On 3 February 2016, the Bishop's Council of the Russian Orthodox Church canonized Botkin as a righteous passion bearer. More on the canonization of the Romanovs 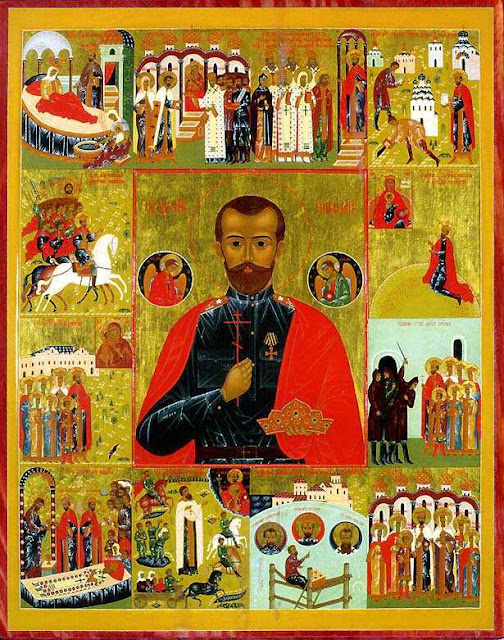 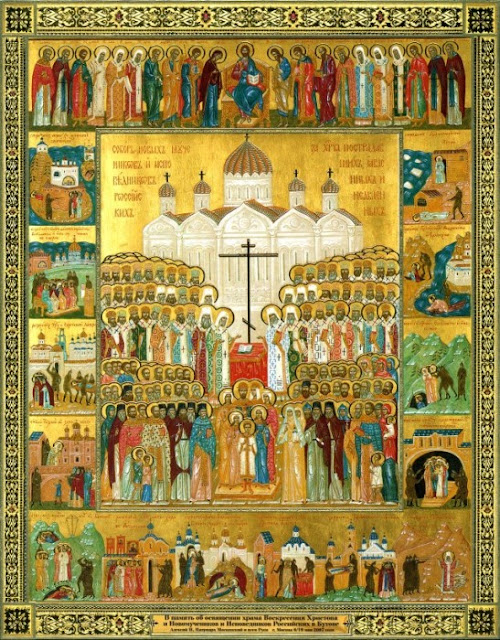 Unknown artist
On February 10, the Church recalls all those who suffered torment and death for the faith of Christ in 1917-1918
I have no further description of this artwork at this time

Please note that the content of this post primarily consists of articles available from Wikipedia or other free sources online.
at July 04, 2020