Athanasius the Athonite (c. 920 – c. 1003), also called Athanasios of Trebizond, was a Byzantine monk who founded the monastic community on Mount Athos, which has since evolved into the greatest centre of Eastern Orthodox monasticism. 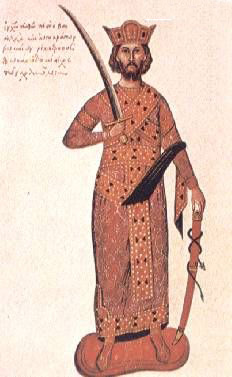 Unknown artist, Greek Icon
Nikiphoros Phokas (Nicephorus II), byzantine emperor (963-969)
I have no further description of this artwork at this time

He studied at Constantinople and became famous there as Abraham. By the time Nikephoros II Phokas, Byzantine Emperor from 963 to 969, ascended the imperial throne, Abraham, ill at ease with the lax morals of the monks living in the capital, changed his name to Athanasios and joined the monks at Mount Kyminas in Bithynia. In 958, he relocated to Mount Athos. 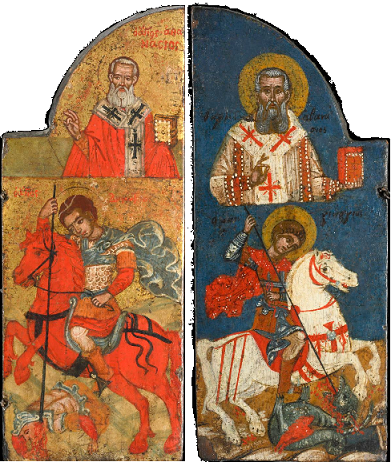 Unknown artist, Greek Icon
St Athanasios and St Demetrios on the left, and with St George on the right, c. 18 C
Egg tempera and with gold leaf on wood prepared with cloth and gesso
240 x 95 millimetres
British Museum

At the top is identified in Greek red script as St Athanasios. He holds a Gospel book in his left hand and holds his right hand up in a gesture of blessing. Below, St Demetrios, also identified by a red inscription, is mounted on a red horse. He wears a cuirass and billowing cloak, and plunges his lance into a figure below. More on this Icon

Unknown artist
Emperor Saint Nikephoros II Phokas, a renowned Byzantine general who reconquered various territories lost to the Muslims
I have no further description of this artwork at this time

Athanasius went to Mount Athos in Greece, where he aided Emperor Phocas, a longtime friend, in repelling the Saracens who were invading the region. Successful in this military campaign, Athanasius received financial backing from his friend to found a monastery on Mount Athos in 961. 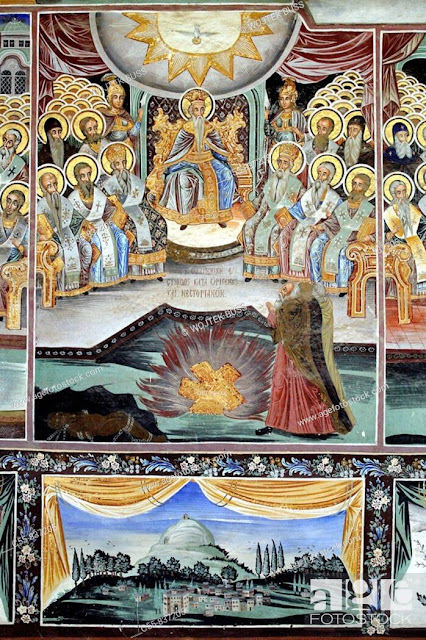 He later started to incorporate the sketes already there into what would eventually become known as the Monastery of Great Lavra, the first monastery built on Mount Athos. Three other foundations followed shortly thereafter, with all three of them remaining in place to the present. Athanasios met with considerable opposition from the hermits already at Mount Athos in the construction of his monasteries. They resented his intrusion and his attempts to bring order and discipline to their lives.

Upon the Byzantine Emperor's death the enemies of Athanasios prevailed and he had to leave Athos for Cyprus, where he lived until the new emperor, John Tzimisces, resumed the patronage of the Great Lavra and bestowed upon the monastery its first charter in 971. Athanasios, spurred by a divine vision, returned at once to Athos. 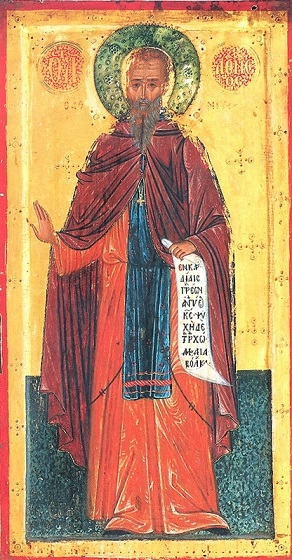 
He died during an accident, killed by a falling masonry, when the cupola of his church collapsed. More on Athanasius the Athonite

Please note that the content of this post primarily consists of articles available from Wikipedia or other free sources online.
at July 05, 2020