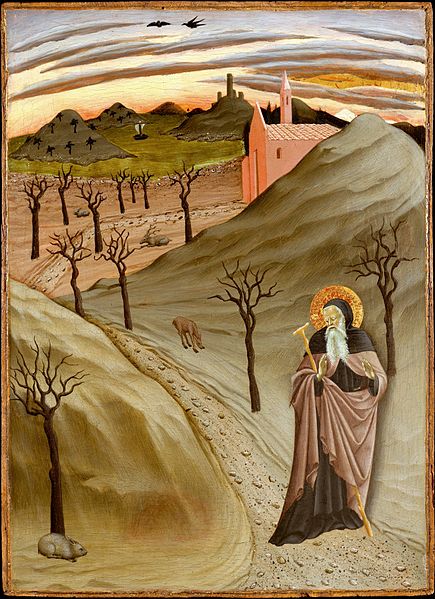 Saint Anthony or Antony (c. 251–356) was a Christian monk from Egypt, revered since his death as a saint. He is known as the Father of All Monks. His feast day is celebrated on January 17 among the Orthodox and Catholic churches and on Tobi 22 in the Egyptian calendar used by the Coptic Church.
The biography of Anthony's life helped to spread the concept of Christian monasticism, particularly in Western Europe via its Latin translations. He is often erroneously considered the first Christian monk. Anthony was, however, the first to go into the wilderness (about ad 270), a geographical move that seems to have contributed to his renown. Accounts of Anthony enduring supernatural temptation during his sojourn in the Eastern Desert of Egypt inspired the often-repeated subject of the temptation of St. Anthony in Western art and literature.
Anthony is appealed to against infectious diseases, particularly skin diseases. In the past, many such afflictions, including ergotism, erysipelas, and shingles, were historically referred to as St. Anthony's fire. More on Saint Anthony

The Master of the Osservanza Triptych, also known as the Osservanza Master and as the Master of Osservanza, is the name given to an Italian painter of the Sienese School active about 1430 to 1450.
Research in 2010 by Maria Falcone in Siena has revealed the name of the Master to be Sano di Pietro. Falcone found a document about an altarpiece by the “Master of Osservanza” for a church in Asciano, just outside Siena, which was actually under the bishopric of Arezzo. The priest of the church in Asciano did not pay the painter and therefore the city government of Siena had to make an appeal to the bishop in Arezzo to force the priest from his district to pay the artist. The artist’s name was included on the document as Sano di Pietro. More The Master of the Osservanza 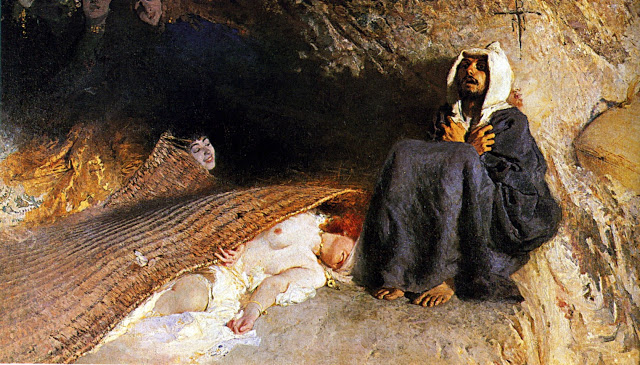 Domenico Morelli (7 July 1823 – 13 August 1901) was an Italian painter, who mainly produced historical and religious works. Morelli was immensely influential in the arts of the second half of the 19th century, both as director of the Accademia di Belle Arti in Naples, but also because of his rebelliousness against institutions.

He was born to a poor family in Naples. His precocious talent was noted, and he was enrolled at the Royal Academy of Fine Arts in Naples in 1836–1846. His early works contain imagery drawn from the Medieval stories and Romantic poets such as Byron. In 1845, he won a fellowship to study in Rome.

Morelli had just returned to Naples, when the insurrections of 1848 erupted in Naples. He joined the protesters in the barricades on via Toledo, and was wounded, nearly killed, and briefly imprisoned.

He was a member of an independent society to promote the liberal arts, called the Societa Promotrice. He was appointed consultant for new acquisitions of the Capodimonte art museum in Naples and, thus, had significant impact on the subsequent direction of the collections. In 1868, Morelli became a professor of painting at his old Academy in Naples. From that period onward, his interest turned to religious and mystical themes, drawn from mostly Christian, but also Jewish and Muslim traditions. From 1899 until his death, he was president of the Royal Academy of Fine Arts in Naples.

Morelli late in life won many awards and distinctions. he was named honorary professor of the principal academies of Italy and Europe, commendatore of the Order of SS. Maurizio e Lazzaro and of the Order of the Crown of Italy, and cavaliere dell' Ordine civile di Savoia. In June, 1886, he was knighted a senator by the King. He died on 13 August 1901 in Naples. More Domenico Morelli 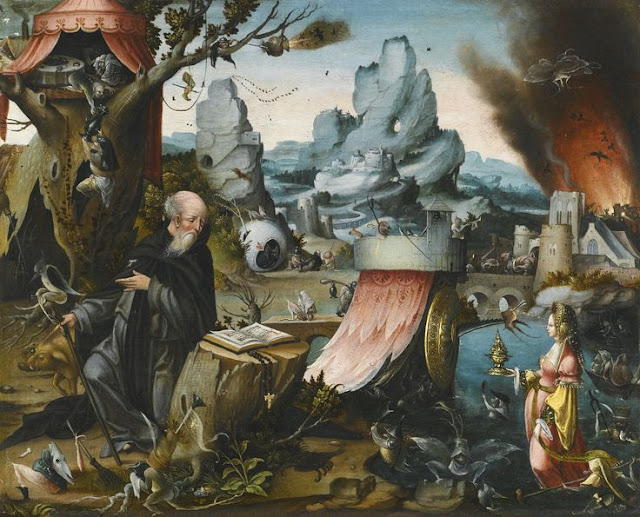 This Painting. In a rocky landscape teeming with a demonic rabble, Saint Anthony is meditating on the Holy Scriptures. He is identified by his companion pig and the 'tau' (Greek letter T) emblem on his cape, the symbol of the Antonine Order that bears his name. His struggles with his spirituality are here depicted in the traditional Christian forms of attacks both by demons and erotic visions. The former take the form of two-legged demons, and the latter the elegant young woman who rises from the river and offers him a cup, symbolic of lust. Behind him stands a hollow tree, the medieval symbol of the seat of evil-doing or alchemy. At the top of this is a tent, inside which quasi-religious figures such as a monk vomit or handle a vase, symbolising the sins of gluttony and lust. The significance of the curious apparition in the foreground, in which a feathered tent is surmounted by a palisade and fronted by an ornate scythed shield is less clear and may simply be fantastical. In the background we see Saint Anthony again, this time beset by two demons, who drag him towards a curious egg-shaped structure.

There is no doubt that the principal inspiration behind this lively panel was the work of the Flemish painter Hieronymus Bosch (1453–1516), who was the first to explore the theme of the hermit saints in such vivid pictorial terms. More on this painting

Hieronymus Bosch (1450 – 1516) was an Early Netherlandish painter. His work is known for its fantastic imagery, detailed landscapes, and illustrations of religious concepts and narratives. Within his lifetime his work was collected in the Netherlands, Austria, and Spain, and widely copied, especially his macabre and nightmarish depictions of hell.
Little is known of Bosch's life, though there are some records. He spent most of it in the town of 's-Hertogenbosch, where he was born in his grandfather's house. The roots of his forefathers are in Aachen, in present-day Germany. His pessimistic and fantastical style cast a wide influence on northern art of the 16th century, with Pieter Bruegel the Elder being his best known follower. His paintings have been difficult to translate from a modern point of view; attempts to associate instances of modern sexual imagery with fringe sects or the occult have largely failed. Today he is seen as a hugely individualistic painter with deep insight into man's desires and deepest fears. Attribution has been especially difficult; today only about 25 paintings are confidently given to his hand along with 8 drawings. Approximately another half dozen paintings are confidently attributed to his workshop. His most acclaimed works consist of a few triptych altarpieces, the most outstanding of which is The Garden of Earthly Delights. More on Hieronymus Bosch