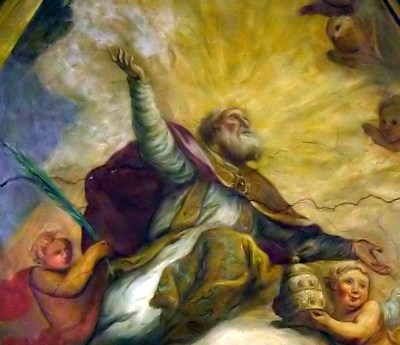 Pope Marcellus I (6 January 255–16 January 309) was the Bishop of Rome or Pope from May or June 308 to his death in 309. He succeeded Pope Marcellinus after a considerable interval. Under Maxentius, he was banished from Rome in 309, on account of the tumult caused by the severity of the penances he had imposed on Christians who had lapsed under the recent persecution. He died the same year, being succeeded by Pope Eusebius. His relics are under the altar of San Marcello al Corso in Rome. His third-class feast day is kept on January 16.

Marcellus found the Church in the greatest confusion. The meeting-places and some of the burial-places of the faithful had been confiscated, and the ordinary life and activity of the Church was interrupted. Added to this were the dissensions within the Church itself, caused by the large number of weaker members who had fallen away during the long period of active persecution and later, under the leadership of an apostate, violently demanded that they should be readmitted to communion without doing penance. 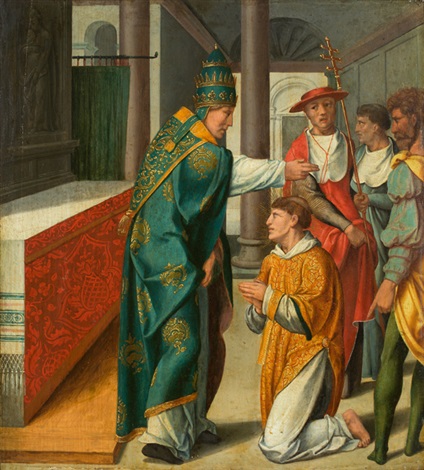 ONE OF THREE PANELS FROM THE CYRIACUS ALTAR FROM ST. KUNIBERT IN COLOGNE.  (LEFT WING, INNER SIDE, UPPER LEFT)

Marcellus was looked upon as a wicked enemy by all the lapsed, because he insisted that they should perform the prescribed penance for their guilt. As a result, serious conflicts arose, some of which ended in bloodshed. The tyrannical Maxentius had the pope seized and sent into exile. Marcellus died shortly after leaving Rome, and was venerated as a saint.

He was buried in the catacomb of St. Priscilla where his grave is mentioned by the itineraries to the graves of the Roman martyrs as existing in the basilica of St. Silvester (De Rossi, Roma sotterranea, I, 176). More on Pope Marcellus I 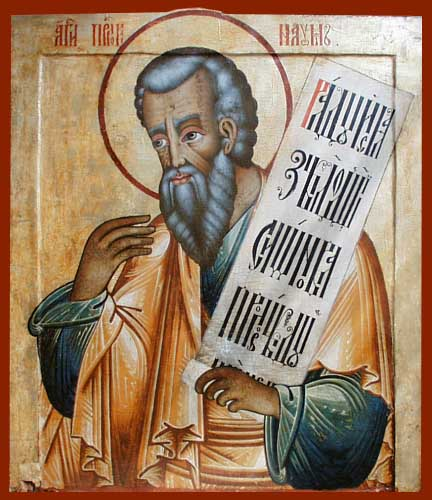 It is said that when St. John the Baptist was beheaded, Herodias had John’s head taken to Jerusalem to be buried because “she feared that the prophet would return to life if his head was buried with his body. Four hundred years later some monks took the head to venerate it in a more proper place. It was stolen and hidden in a cave.

The man who stole it revealed on his deathbed where it was, but the hiding place was kept secret for a long time. Many years later, a holy monk, St. Marcellus, had taken up residence in this cave. It was revealed to him where the head was hidden. The head was then enshrined in a beautiful church in Poitiers in France. More on St. John the Baptist

Bartholomäus Bruyn (1493–1555), usually called Barthel Bruyn or Barthel Bruyn the Elder, was a German Renaissance painter active in Cologne. He painted altarpieces and portraits, and was Cologne's foremost portrait painter of his day.

His early works suggest that he received his artistic training in the Lower Rhine. His earliest documented altarpiece is a Coronation of the Virgin. Bruyn’s altarpieces of the 1510s and 1520s are influenced by the style of Jan Joest, to whom Bruyn was related.

In the 1530s, he developed a more Italianate style that reflects the examples of Raphael and Michelangelo.

Bruyn is especially known for his portraits. He was the first important portrait painter in Cologne, and the founder of a prolific school of portraiture that was continued by his sons Arnt and Barthel Bruyn the Younger. Bruyn did not sign his portraits, and some of them have in the past been misattributed to Hans Holbein, whose influence is apparent in Bruyn's works after 1539.

Barthel Bruyn was a respected citizen of Cologne and active throughout his life in civic affairs. He was elected to the City Council in 1549 and 1553, and died a wealthy man. His works are in numerous public collections, including the National Gallery, London; the Metropolitan Museum of Art in New York; and the Louvre in Paris. More on Bartholomäus Bruyn

Thank you for visiting my blog and also for liking its posts and pages.
at January 16, 2019