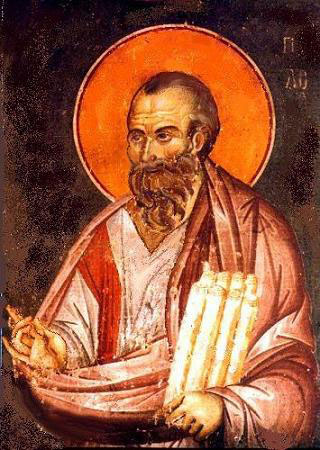 Polycarp (AD 69 – 155) was a 2nd-century Christian bishop of Smyrna. It is recorded that he had been a disciple of John the Apostle. Saint Jerome wrote that Polycarp was a disciple of John and that John had ordained him bishop of Smyrna. He was reckoned the chief of all the Christians of Asia, because he had been taught by several of the Apostles. 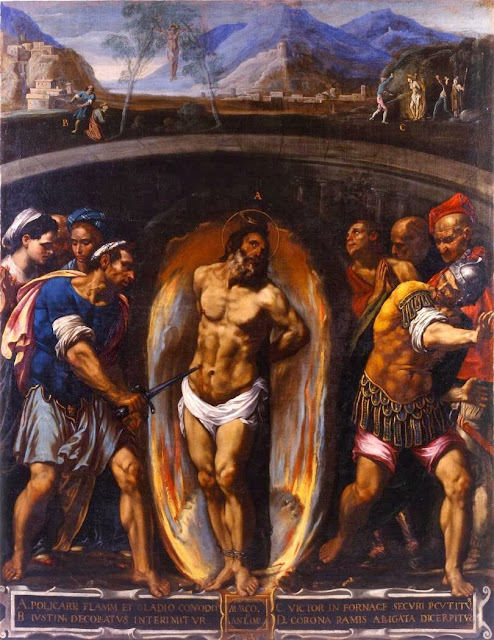 Niccolò Circignani (c. 1517/1524 – after 1596) was an Italian painter of the late-Renaissance or Mannerist period. He was one of three Italian painters called Pomarancio. His first works are documented from the 1560s, where he painted frescos on the Old Testament stories for the Vatican Belvedere and completed altarpieces for Orvieto, Umbertide, Città di Castello as well as Città della Pieve.

He painted frescoes (starting 1574) on mythologic themes including a Judgement of Paris, Stories from the Aenid, and others, in collaboration with Giovanni Antonio Pandolfi in the Palazzo della Corgna in Castiglione del Lago.


From 1579 he returned to Rome to work with Matthijs Bril and decorated the Sala della Meridiana in the Torre dei Venti as well as in the Loggie in the Vatican. He then became one of the artists favored by the Jesuits. Assisted by Matteo da Siena, he began depicting scenes of Jesuit martyrdom. He was further commissioned such works, depicting church martyrs, with help from Antonio Tempesta for the church of Santo Stefano Rotondo. Here he finally completed over thirty graphic scenes of martyrdom, depicting every gruesome method as if it were an advertisement for a torture chamber. More on Niccolò Circignani

In 167, persecution broke out in Smyrna. When Polycarp heard that his pursuers were at the door, he said, "The will of God be done; " and meeting them, he begged to be left alone for a little time, which he spent in prayer. He was brought to Smyrna early on Holy Saturday; and, as he entered, a voice was heard from heaven, "Polycarp, be strong." When the proconsul besought him to curse Christ and go free, Polycarp answered, "Eighty-six years I have served Him, and He never did me wrong; how can I blaspheme my King and Saviour?" When he threatened him with fire, Polycarp told him this fire of his lasted but a little, while the fire prepared for the wicked lasted forever. 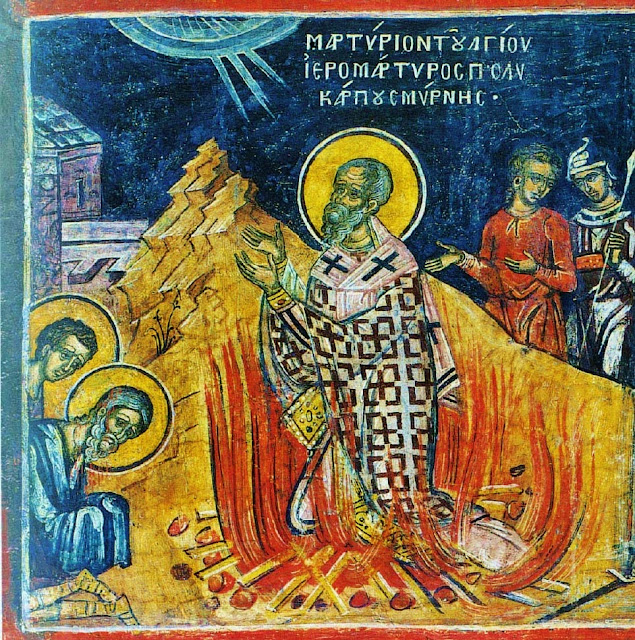 At the stake he thanked God aloud for letting him drink of Christ's chalice. The fire was lighted, but it did him no hurt; so he was stabbed to the heart, and his dead body was burnt. Polycarp is regarded as a saint and Church Father. His name 'Polycarp' means 'much fruit' in Greek.

With Clement of Rome and Ignatius of Antioch, Polycarp is regarded as one of three chief Apostolic Fathers. The sole surviving work attributed to his authorship is his Letter to the Philippians; it is first recorded by Irenaeus of Lyons. More on Polycarp 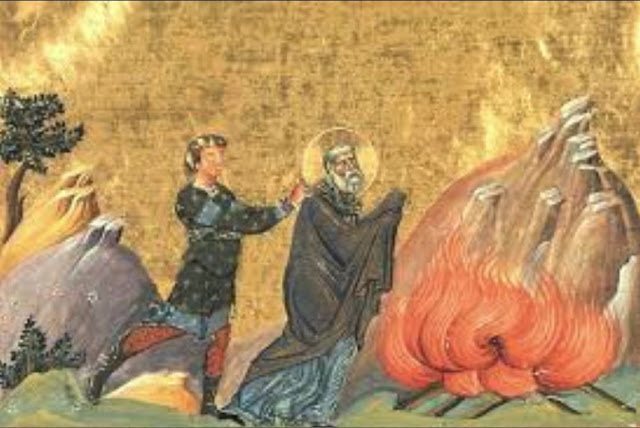 N.B. The persecution was not very severe. Christians were suspected of being disloyal to the state, so they were expected to show their loyalty by making an incense offering to the emperor–who was considered divine.

Many of the magistrates who had to enforce the edict were unhappy doing so and offered the Christians various compromises. One of them was that they could make their offering by proxy–someone else did it on their behalf or they could offer just one tiny grain of incense, and didn’t need to even put it on the fire, but just put it into the container of another person who was offering the incense.

Of course many of the faithful took the compromise. St Polycarp, the Bishop of Smyrna, did not. Dwight Longenecker

Thank you for visiting my blog and also for liking its posts and pages.
at January 27, 2019