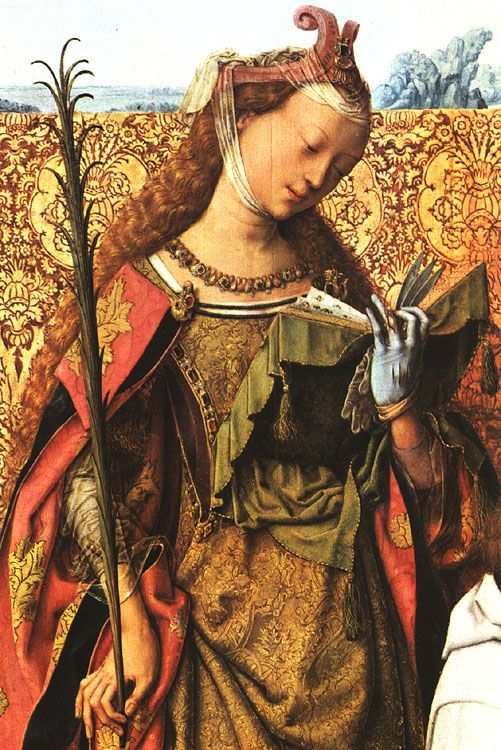 The Master of the Saint Bartholomew Altarpiece was an Early Netherlandish painter active in Germany between 1475/1480 and 1510. Despite his anonymity, he is one of the most recognizable artists of the early Renaissance period in German art. 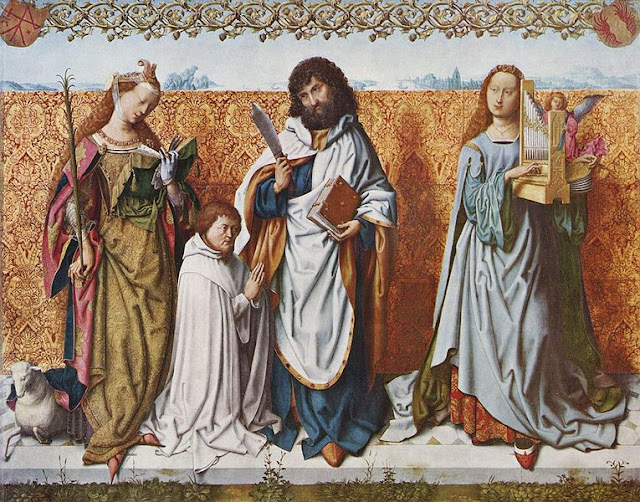 Agnes is depicted in art with a lamb, evoking her name which is based on the Latin word for "lamb". She is also shown with a martyr's palm.

Almost nothing is known of his life, including his name; nevertheless, his hand is distinctive enough that scholars have found it fairly easy to trace his career. His name is derived from an altarpiece dated to between 1505 and 1510, depicting Saint Bartholomew flanked by Saint Agnes and Saint Cecilia. The painting is known to have hung in the church of Saint Columba in Cologne; the inclusion of a Carthusian monk in the picture indicates a possible connection to the Carthusian monastery in that city. More on The Master of the Saint Bartholomew Altarpiece


Agnes of Rome (c. 291 – c. 304) was a popular saint about whom little is known, Agnes is said to have been a beautiful, wealthy Roman maiden who had, in childhood, dedicated herself to God. 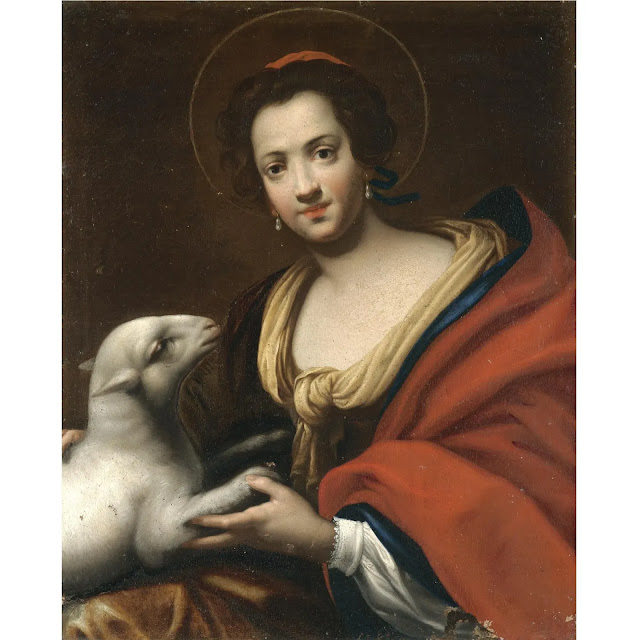 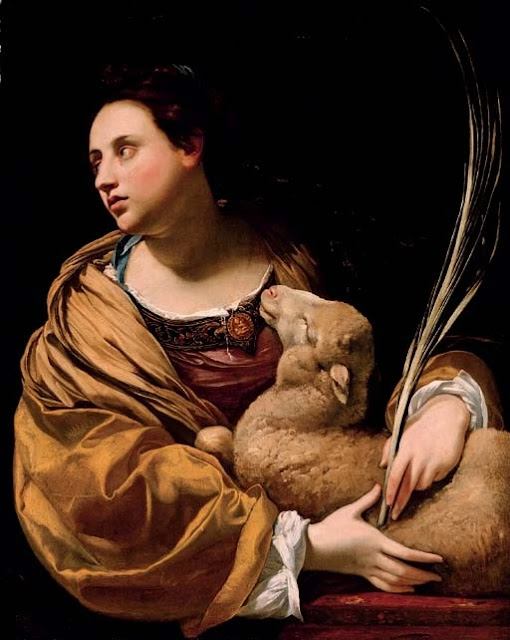 Simon Vouet (9 January 1590 – 30 June 1649) was a French painter and draftsman, who today is perhaps best remembered for helping to introduce the Italian Baroque style of painting to France. More on Simon Vouet

Some say that a rejected suitor betrayed her to authorities; others say that she was asked at 13 to sacrifice to the gods and marry, both of which she refused. Legends tell of her being thrown into a brothel, where her purity was miraculously preserved. 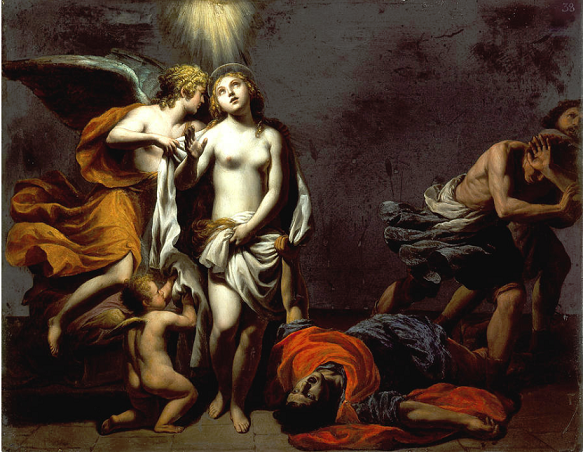 Alessandro Turchi (1578 – 22 January 1649) was an Italian painter of the early Baroque, born and active mainly in Verona, and moving late in life to Rome. He also went by the name Alessandro Veronese or the nickname L'Orbetto.

Turchi initially trained with Felice Riccio (il Brusasorci) in Verona. By 1603, he was working as independent painter. Turchi painted the organ shutters for the Accademia Filarmonica of Verona. When Brusasorci died in 1605, Turchi and Pasquale Ottino completed a series of their deceased master's canvases. On leaving the school of Riccio, he went to Venice, where he worked for a time under Carlo Cagliari.

By 1616, Turchi traveled to Rome and participated in the fresco decoration depicting the Gathering of Manna for the Sala Reggia of the Quirinal Palace. In competition with Andrea Sacchi and Pietro da Cortona, he painted some pictures in the church of Santa Maria della Concezione dei Cappuccini. In 1619, he sent an altarpiece of the 40 martyrs for the Chapel of the Innocents in the church of Santo Stefano, Verona, to hang next to paintings by Pasquale Ottino and Marcantonio Bassetti. He was much employed on cabinet pictures, representing historical subjects, which he frequently painted on black marble.

In 1637, with the sponsorship of the cardinal Francesco Barberini, he became Principe or director of the Accademia di San Luca. In 1638, he joined the papal guild of artists, called the Pontifical Academy of Fine Arts and Letters of the Virtuosi al Pantheon. He died in Rome. More on Alessandro Turchi

Having escaped that fate, she was martyred. In the IV Century, Constantia, the daughter of Constantine, built a basilica on the site of her tomb. St. Ambrose wrote about Agnes in De virginitate, and Damasus I wrote an epitaph for her. Prudentius composed a hymn in her honor. Her emblem in art is the lamb because of the similarity between her name and the Latin word for lamb, agnus. 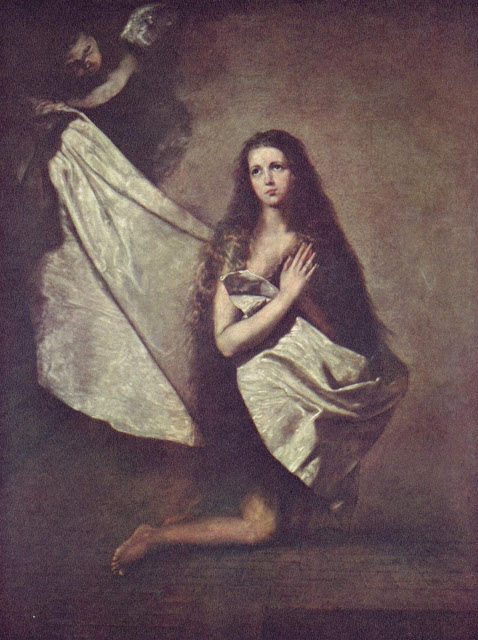 José de Ribera (January 12, 1591 – September 2, 1652) was a Spanish Tenebrist painter and printmaker, better known as Jusepe de Ribera. He also was called Lo Spagnoletto ("the Little Spaniard") by his contemporaries and early writers. Ribera was a leading painter of the Spanish school, although his mature work was all done in Italy. More on José de Ribera

The legend cannot be proven true, and many details of the fifth century Acts of Saint Agnes are open to criticism likely full of elaboration, though substantially the circumstances of her martyrdom are authentic. Archaeological evidence indicates that a young girl of about thirteen years of age, a virgin named Agnes, was martyred in Rome and honoured for her sacrifice. A church was built over her tomb, and her relics venerated.

A beautiful young girl of wealthy family, Agnes had many suitors of high rank, and the young men, slighted by her resolute devotion to religious purity, submitted her name to the authorities as a follower of Christianity. More on Agnes of Rome