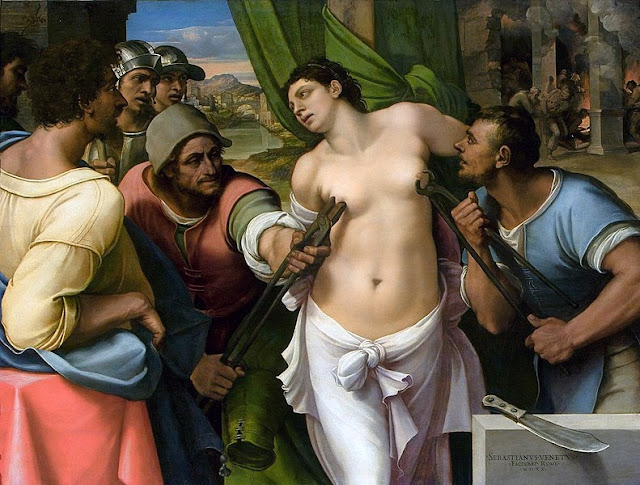 Sebastiano del Piombo (1485 – 21 June 1547) was an Italian painter of the High Renaissance and early Mannerist periods famous as the only major artist of the period to combine the colouring of the Venetian school in which he was trained with the monumental forms of the Roman school. He belongs both to the painting school of his native city, Venice, where he made significant contributions before he left for Rome in 1511, and that of Rome, where he stayed for the rest of his life, and whose style he thoroughly adopted.

Having achieved success as a lutenist in Venice when young, he turned to painting and trained with Giovanni Bellini and Giorgione. When he first went to Rome he worked alongside Raphael and then became one of the few painters to get on well with Michelangelo.

In 1531 he became the Keeper of the Seal to the Papacy, and so his new job title of Piombatore.

He painted portraits and religious subjects in oils, and once he was established avoided the large fresco schemes that took up so much of the time of Raphael and Michelangelo. His earlier career in both Venice and Rome was somewhat overshadowed by the presence of clearly greater painters in the same city, but after the death of Raphael in 1520 he became Rome's leading painter. More on Sebastiano del Piombo 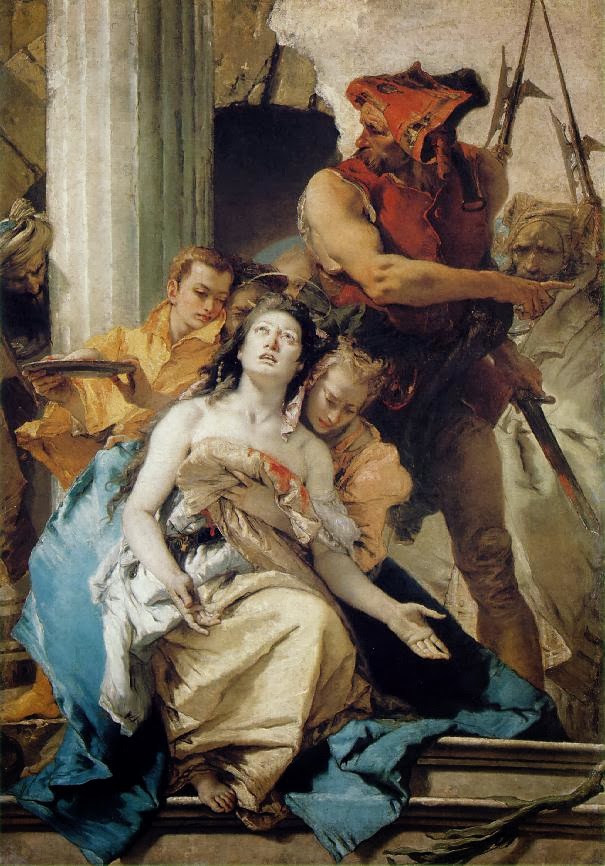 Giovanni Battista Tiepolo, 1696 - 1770. Born into a wealthy and noble family in Venice, Giambattista Tiepolo was recognized by contemporaries throughout Europe as the greatest painter of large-scale decorative frescoes in the 1700s. He was admired for having brought fresco painting to new heights of technical virtuosity, illumination, and dramatic effect. Tiepolo possessed an imagination characterized by one of his contemporaries as "all spirit and fire."

A gifted storyteller, Tiepolo painted walls and ceilings with large, expansive scenes of intoxicating enchantment. In breath-taking visions of mythology and religion, the gods and saints inhabit light-filled skies. His ability to assimilate his predecessor and compatriot Paolo Veronese's use of color was so profound that his contemporaries named him Veronese redivio (a new Veronese).

Tiepolo's commissions came from the old established families of Italy, religious orders, and the royal houses of Spain, Germany, Sweden, and Russia. His frescoes adorn palaces, churches, and villas, and his artistic legacy consists of some eight hundred paintings, 2,400 drawings, two sets of etchings, and acres of fresco. When Tiepolo died at the age of seventy-four, a Venetian diarist noted the "bitter loss" of "the most famous Venetian painter, truly the most renowned...well known in Europe and the most highly praised in his native land." More on Giovanni Battista Tiepolo

Saint Agatha of Sicily (231 AD – 251 AD) is a Christian saint and virgin martyr. Agatha was born at Catania or Palermo, Sicily, and she was martyred in approximately 251. She is one of seven women, who, along with the Blessed Virgin Mary, are commemorated by name in the Canon of the Mass.
She is the patron saint of Catania, Molise, Malta, San Marino, and Zamarramala, a municipality of the Province of Segovia in Spain. She is also the patron saint of breast cancer patients, martyrs, wet nurses, bell-founders, bakers, fire, earthquakes, and eruptions of Mount Etna.

Although the martyrdom of Saint Agatha is authenticated, and her veneration as a saint had spread beyond her native place even in antiquity, there is no reliable information concerning the details of her death. According to Jacobus de Voragine, Legenda Aurea of ca. 1288, having dedicated her virginity to God, fifteen-year-old Agatha, from a rich and noble family, rejected the amorous advances of the low-born Roman prefect Quintianus, who then persecuted her for her Christian faith. He sent Agatha to Aphrodisia, the keeper of a brothel. 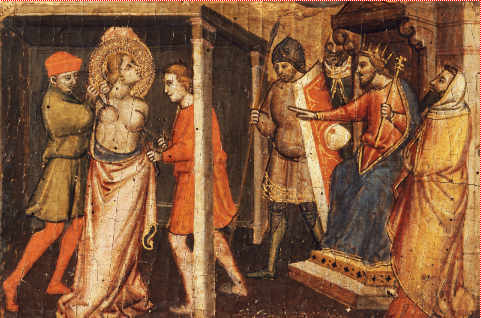 Lorenzo di Niccolò or Lorenzo di Niccolò di Martino was an Italian painter active in Florence from 1391 to 1412. Often erroneously cited as the son of Niccolò di Pietro Gerini, with whom he realized some works, this artist transformed his style from one more reminiscent of Giotto to one more elegant and linear, similar to that of such artists as Lorenzo Monaco. Together with Niccolò di Pietro Gerini, he painted some frescoes in the Chapterhouse of the convent of San Francesco (Prato) and the panel Coronation of the Virgin, once in Santa Felicita. A slightly later work on the same subject for the Medici Chapel in Santa Croce, Florence, dated to 1409 in the predella, today is split between its original location and the Bagatti Valsecchi Museum in Milan. More on Lorenzo di Niccolò Gerini

The madam finding her intractable, Quintianus sent for her, argued, threatened, and finally had her put in prison. Amongst the tortures she underwent was the cutting off of her breasts with pincers. After further dramatic confrontations with Quintianus, represented in a sequence of dialogues in her passio that document her fortitude and steadfast devotion, Saint Agatha was then sentenced to be burnt at the stake, but an earthquake saved her from that fate; instead, she was sent to prison where St. Peter the Apostle appeared to her and healed her wounds. Saint Agatha died in prison, according to the Legenda Aurea in "the year of our Lord two hundred and fifty-three in the time of Decius, the emperor of Rome." More on Saint Agatha of Sicily 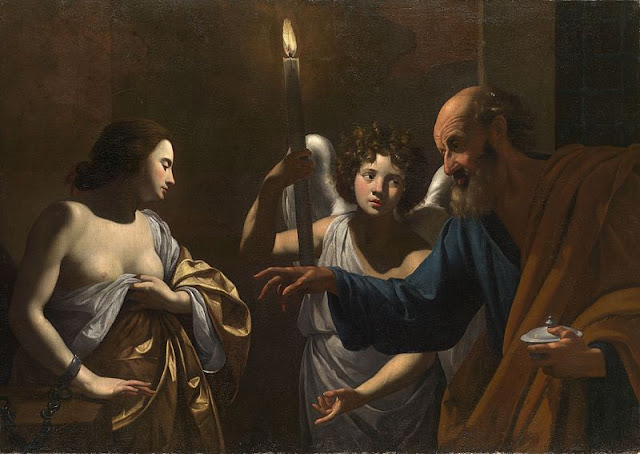 Vouet formed his style in Italy, where he lived from 1612 to 1627. The use of dramatic contrasts of light and shade seen in such early works as his Two Lovers indicates that he began in Rome as a follower of Caravaggio. Works done after 1620, however, display more idealized figures. Vouet’s Time Vanquished (1627) breaks with the tenebrism of Caravaggio, using the more evenly diffused white light that characterizes his later style.

He returned to Paris in 1627 at the request of Louis XIII, who named him his first painter. Thereafter, Vouet won almost all the important painting commissions and dominated the city artistically for 15 years. He exercised an enormous influence with such works as Riches (c. 1630), which was probably part of the decorative program of the château of Saint-Germain-en-Laye. Engravings and surviving panels show that he had studied Italian illusionistic ceiling decoration. His other principal undertakings were in the Hôtel de Bullion and in the palace of the Cardinal de Richelieu at Rueil. More on Simon Vouet