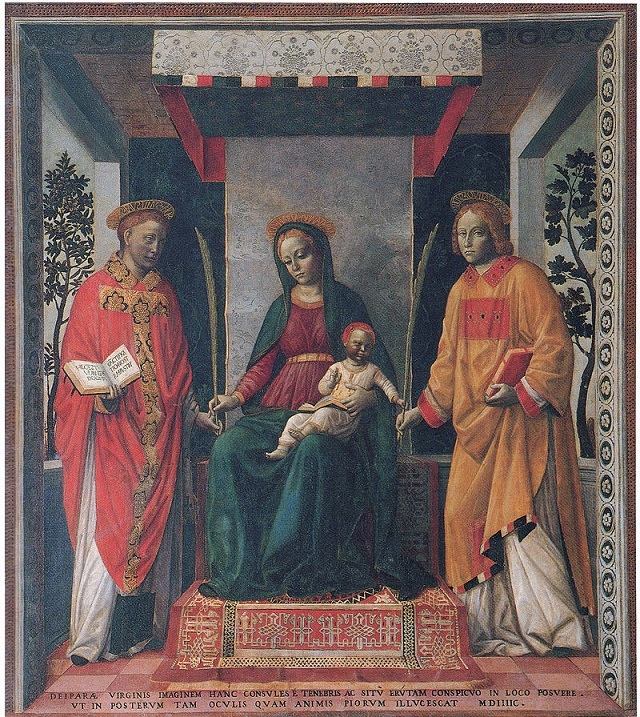 Saints Jovita and Faustinus depicted as two knightly brothers holding the palms of martyrdom. Sometimes only Jovita is shown, richly dressed and on horseback; an angel may be shown saving them from drowning; sometimes shown with Faustinus of Brescia

Brescia  is a city and comune in the region of Lombardy in northern Italy.

Vincenzo Foppa (c. 1427 – c. 1515) was an Italian painter from the Renaissance period. While few of his works survive, he was an esteemed and influential painter during his time and is considered the preeminent leader of the Early Lombard School. He spent his career working for the Sforza family, Dukes of Milan, in Pavia, as well as various other patrons throughout Lombardy and Liguria. He lived and worked in his native Brescia during his later years. More on Vincenzo Foppa


Saints Jovita and Faustinus were said to be Christian martyrs under Hadrian. Their traditional date of death is 120. They are patron saints of Brescia.

"Jovita" in modern times is a woman's name. In some accounts the saints were instead Jovinus and Faustinus, brothers. 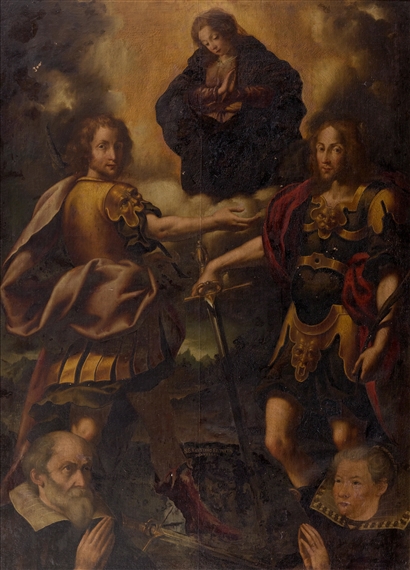 Marco or Bartolomeo Genovesini (active 1628) was an Italian painter or two brothers of the Roverio family who were painters, and active in the Augustinian Monastery and the Carthusian Monastery of Garignano in Milan

Tradition states that they were members of a noble family of Brescia in Lombardy (northern Italy). Jovinus, the older brother, was a preacher; Faustinus, a deacon. According to the tradition of Brescia, they preached Christianity fearlessly while their bishop lay in hiding. Their zeal excited the fury of the heathens against them, then they were arrested by a heathen lord called Julian.

They were commanded to adore the sun, but replied that they adored the living God who created the sun to give light to the world. The statue before which they were standing was brilliant and surrounded with golden rays. Saint Jovita, looking at it, cried out: “Yes, we adore the God reigning in heaven, who created the sun. And you, vain statue, turn black, to the shame of those who adore you!” At his word, it turned black. The Emperor commanded that it be cleaned, but the pagan priests had hardly begun to touch it when it fell into ashes.

The two brothers were sent to the amphitheater to be devoured by lions, but four of those came out and lay down at their feet. They were left without food in a dark jail cell, but Angels brought them strength and joy for new combats. The flames of a huge fire respected them, and a large number of spectators were converted at the sight. 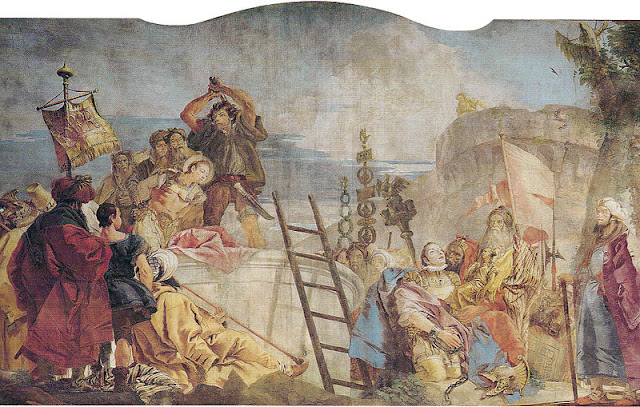 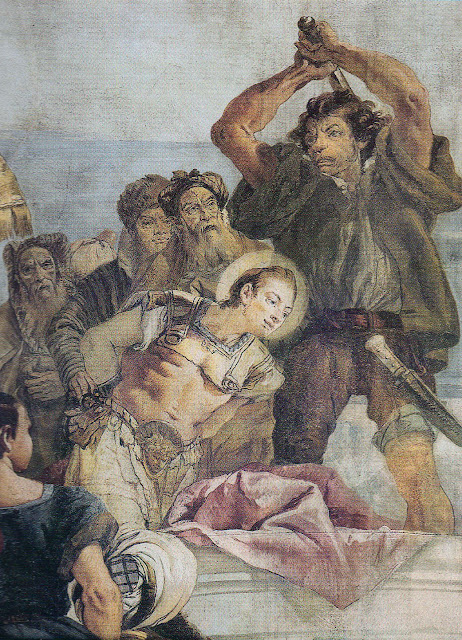 They were tortured and dragged to Milan, Rome and Naples, and then brought back to Brescia. As neither threats nor torments could shake their constancy, the Emperor Hadrian, who happened to be passing through Brescia, commended them to be beheaded. 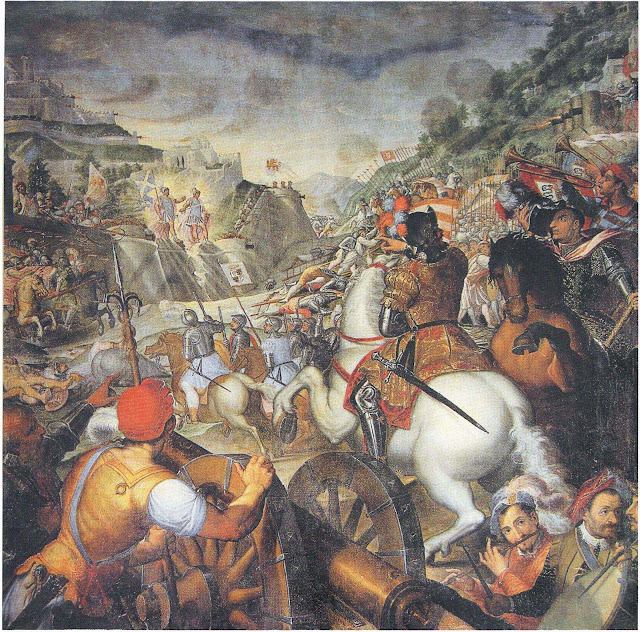 Grazio Cossali, sometimes called Orazio Cossali (1563 – December 4, 1629) was an Italian painter who worked in Brescia, Cremona, and Venice, active during the Mannerist or early Baroque periods.

In the Brescian churches of Santa Maria delle Grazie and Santa Maria dei Miracoli are paintings of the Adoration of the Magi and the Presentation of Mary in the Temple. He also painted for the churches of San Lorenzo and San Francesco in Brescia. He painted a small Coronation of the Virgin (1590s) for the parish church of Quinzanello. He painted a canvas on the history of Carlo Borromeo for the church of the Madonna della Stella in Cellatica.

The town hall, or Palazzo Communale, of Cremona has one of his paintings, one depicting the Harvest of the Manna (1587) in the Council Chamber (or hall of the Paintings). His son Giacomo was also a painter. More on Grazio Cossali

In 1426 Brescia  became a possession of the Venetian Republic.  An episode which disturbed the four centuries of tranquillity was the terrible siege by the Visconti troops led by Nicolò Piccinino, which lasted from 1438 to 1440.  At first  forty bombards battered the walls for months then the final attack was launched, only to be repelled by a thousand Brescian foot-soldiers and  six hundred horse; according to tradition their victory was also owing to the miraculous apparition of the patron saints of the city -Faustino and Giovita. The saints appeared on the bastions of Roverotto to help the Brescians drive back the fifteen thousand Visconti soldiers. 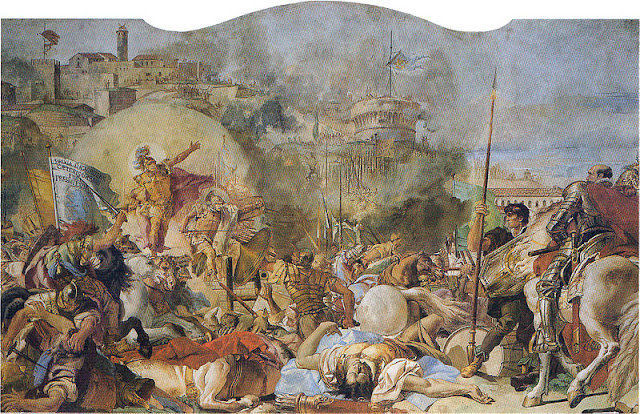 Giovanni Domenico Tiepolo (August 30, 1727 – March 3, 1804) was an Italian painter and printmaker in etching. He was the son of artist Giovanni Battista Tiepolo and elder brother of Lorenzo Baldissera Tiepolo. Domenico was born in Venice, studied under his father, and by the age of 13 was the chief assistant to him. He was one of the many assistants, including Lorenzo, who transferred the designs of his father (executed in the 'oil sketch' invented by the same). By the age of 20, he was producing his own work for commissioners. 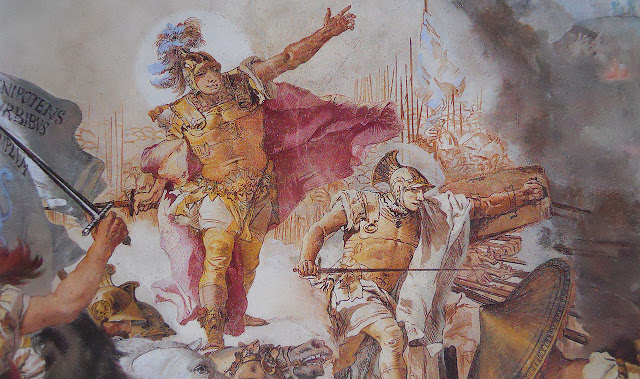 His painting style developed after the death of his father in 1770, at which time he returned to Venice, and worked there as well as in Genoa and Padua. His painting, though keeping the decorative influence of his father, moved from its spatial fancy and began to take a more realistic depiction. His portraits and scenes of life in Venice are characterised by movement, colour, and deliberate composition. More on Giovanni Domenico Tiepolo 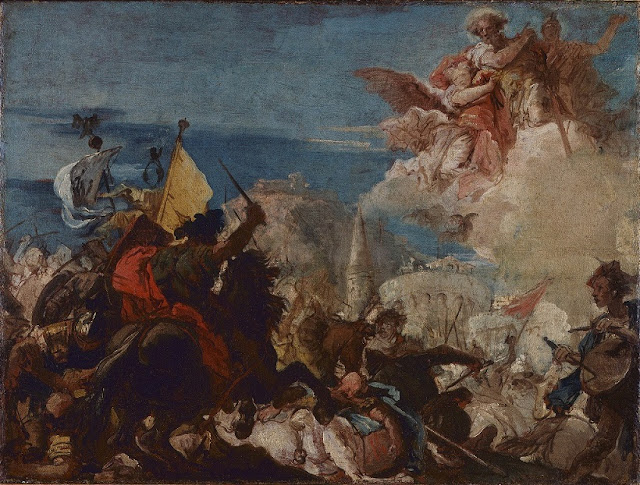 The many "Acts" of these saints are chiefly of a legendary character. The Jesuit Fedele Savio questioned nearly every fact related of them except their existence of the martyrdom, which are too well attested by their inclusion in so many of the early martyrologies and their extraordinary cult in their native city, of which from time immemorial they have been the chief patrons.


Their common feast day on 15 February, the traditional date of their martyrdom, was inserted into the General Roman Calendar . It was removed in 1969, because their "Acts are completely fabulous, treating Jovita as a preacher, although she was a woman and a man was Faustinus." However modern minds tend to forget that the name Jovita or Giovita was a man's name in the pre-Christian and early Christian era The two saints remain listed in the Roman Martyrology. The cities of Rome, Bologna and Verona share with Brescia possession of their relics.

Modern tradition considers Faustine's day as the anti-Valentine's Day. This is why (mostly in southern Europe) single people celebrate on 15 February. More on Jovinus and Faustinus

Please note that the content of this post primarily consists of articles available from Wikipedia or other free sources online.
at February 16, 2019