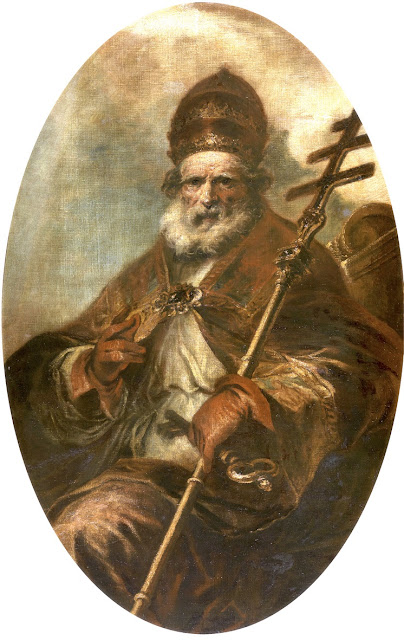 Francisco Herrera the Younger ("el Mozo"; 1622 - 25 August 1685) was a Spanish painter and architect. He began his career under his father's instruction; but the father's violent temper at last became so intolerable that the youth fled to Rome. For six years the younger Herrera devoted himself to the study of architecture, perspective, and the antique, his aim being fresco painting.

He left to Madrid where he painted a great Triumph of St. Hermengild for the church of the Carmelite friars, and a group of frescoes in San Felipe el Real which was appreciated by Philip IV of Spain, who commissioned him the painting of the dome of the chapel of Our Lady of Atocha, and thereafter made him painter to the king and superintendent of royal buildings. Besides his work in still life he painted many portraits, and while these lacked the vigour which characterized his father's work, they exhibit a greater knowledge and use of chiaroscuro.

Charles II of Spain kept him at his Court and made him master of the royal works. For this king Herrera renovated the Basilica of Our Lady of the Pillar, in Zaragoza.

Herrera died at Madrid in 1685. More on Francisco Herrera

He was a Roman aristocrat, and was the first pope to have been called "the Great". He is perhaps best known for having met Attila the Hun in 452 and persuading him to turn back from his invasion of Italy. 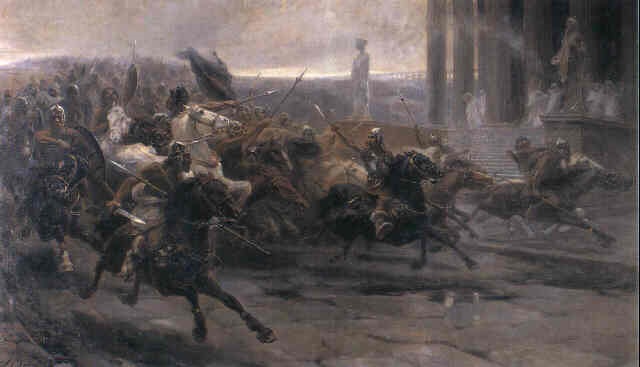 The Huns were a nomadic tribe prominent in the 4th and 5th century CE whose origin is unknown but, most likely, they came from “somewhere between the eastern edge of the Altai Mountains and the Caspian Sea, roughly modern Kazakhstan”. More on the Huns

He was born in Colmenar de Oreja, Spain, and exhibited a talent for art when he was a young child. At thirteen, he met Don José Ballesterwho was impressed with his work and decided to bring Checa and his family to the capital to begin his art studies.

In 1873, he entered the Escuela de Bellas Artes de San Fernando in Madrid, followed by study at the Spanish Academy of Fine Arts in Rome [es], where he would paint Invasion of the Barbarians (since lost in a fire) which won the gold medal at the National Exhibition of Fine Arts in 1887. More on Ulpiano Fernández-Checa y Saiz 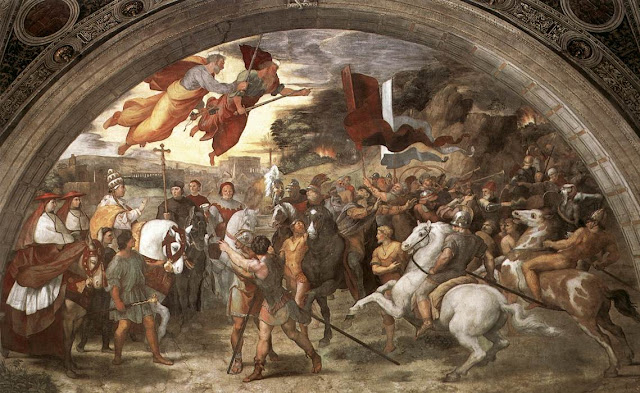 Raffaello Sanzio da Urbino (April 6 or March 28, 1483 – April 6, 1520), known as Raphael, was an Italian painter and architect of the High Renaissance. His work is admired for its clarity of form, ease of composition, and visual achievement of the Neoplatonic ideal of human grandeur. Together with Michelangelo and Leonardo da Vinci, he forms the traditional trinity of great masters of that period.


Raphael was enormously productive, running an unusually large workshop and, despite his death at 37, leaving a large body of work. Many of his works are found in the Vatican Palace. The best known work is The School of Athens in the Vatican Stanza della Segnatura. After his early years in Rome much of his work was executed by his workshop from his drawings, with considerable loss of quality. He was extremely influential in his lifetime, though outside Rome his work was mostly known from his collaborative printmaking. More Raffaello

The fresco was completed after the death of Julius II (pontiff from 1503 to 1513), during the pontificate of his successor Leo X (pontiff from 1513 to 1521). In fact the latter appears twice in the same scene, portrayed in the guise of Pope Leo the Great and as cardinal. According to legend, the miraculous apparition of Saints Peter and Paul armed with swords during the meeting between Pope Leo the Great and Attila (452 A.D.) caused the king of the Huns to desist from invading Italy and marching on Rome. More on this work 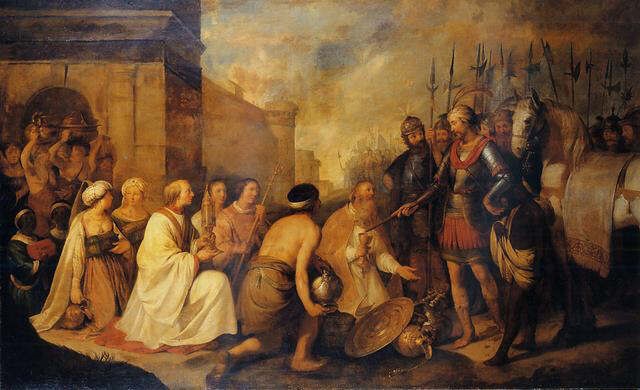 Hendrick was the oldest son of Abraham Bloemaert. His brothers Cornelis and Adriaen were also painters. In 1626 he was registered in Rome, but by 1631 he was back in Utrecht, where he registered in the Utrecht Guild of St. Luke.

He is considered an important member of the Utrecht school of Caravaggisti, and was known for his portraits and historical allegories. He was also known for his poetry. More on Hendrick Bloemaert

He is also a Doctor of the Church, most remembered theologically for issuing the Tome of Leo, a document which was a major foundation to the debates of the Ecumenical Council of Chalcedon. The Council of Chalcedon, the fourth ecumenical council, dealt primarily with Christology, and elucidated the orthodox definition of Christ's being as the hypostatic union of two natures, divine and human, united in one person, "with neither confusion nor division". It was followed by a major schism associated with Monophysitism, Miaphysitism and Dyophysitism. More on Pope Leo I 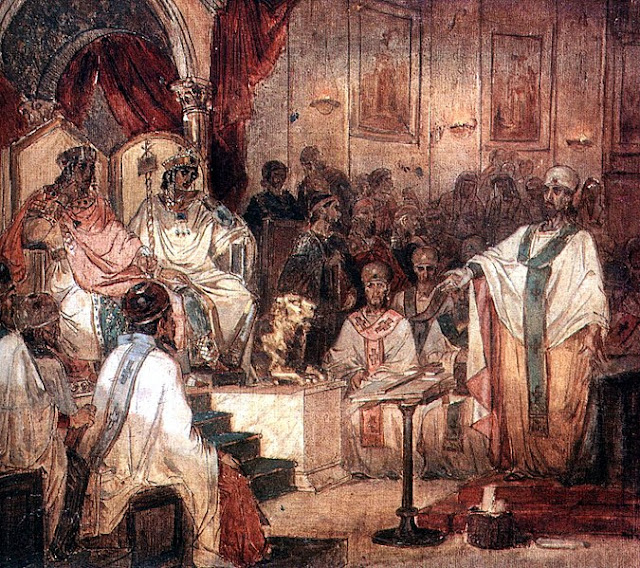 Vasily Ivanovich Surikov (24 January 1848, Krasnoyarsk – 19 March 1916, Moscow) was a Russian Realist history painter of Siberian origin. Many of his works have become familiar to the general public through their use as illustrations.

In 1859, his father died of tuberculosis so the family were forced to rent the second floor of their house to survive financially. He began drawing while attending the district school and was encouraged by the local art teacher. His first formal work dates from 1862, but his family could not afford to continue his education and he became a clerk in a government office. This brought him into contact with the Governor of Yenisei, who was able to find him a patron.

In 1868, he was unable to qualify for admission to the Imperial Academy of Arts, so he studied at the drawing school of the Imperial Society for the Encouragement of the Arts.

From 1869 to 1875, he studied with Pavel Chistyakov, Bogdan Willewalde and Pyotr Shamshin, winning several medals.

In 1877, he received a commission to paint murals at the Cathedral of Christ the Saviour and he moved to Moscow. He chose to remain in Moscow and began the series of historical paintings that would establish his reputation.

In 1948, on the 100th anniversary of his birth, his estate in Krasnoyarsk became a museum. Two monuments have been erected there, in 1954 and in 2002. More on Vasily Ivanovich Surikov

Please note that the content of this post primarily consists of articles available from Wikipedia or other free sources online.
at February 18, 2020