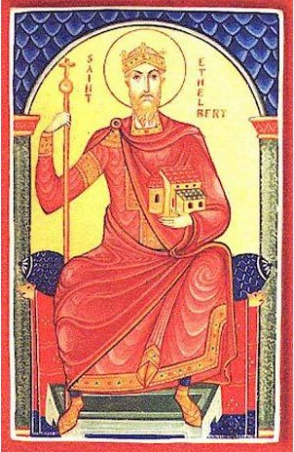 Æthelberht (c. 550 – 24 February 616) was King of Kent from about 589 until his death.  The son of Eormenric, succeeding him as king. He married Bertha, the Christian daughter of Charibert, king of the Franks (Paris) , thus building an alliance with the most powerful state in contemporary Western Europe; the marriage probably took place before he came to the throne.

Artist Unknown
The icon above is one of a series of panels on Ethelbert displayed in Hereford Cathedral
Ethelbert surrounded by Pope Gregory the Great and St Augustine!

Queen Bertha’s reign in Kent saw the beginning of a Roman Catholic influence on Anglo-Saxon society – it is thought that Bertha persuaded Ethelbert to welcome St Augustine and the Roman Mission. 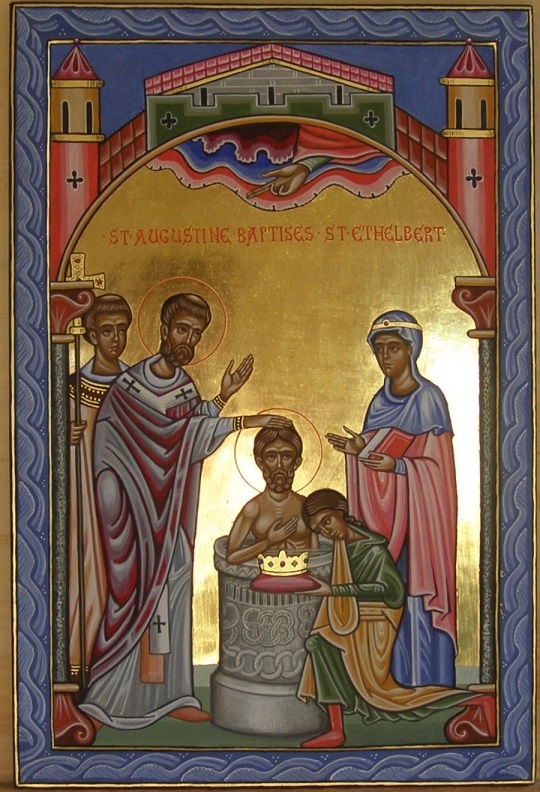 Saint Augustine baptizes king Ethelbert, with his wife, Bertha, the Christian daughter of Charibert, king of the Franks

It is possible that Æthelberht was converted to Christianity before Augustine's arrival. Æthelberht's wife did bring a Frankish bishop with her, to attend her at court. 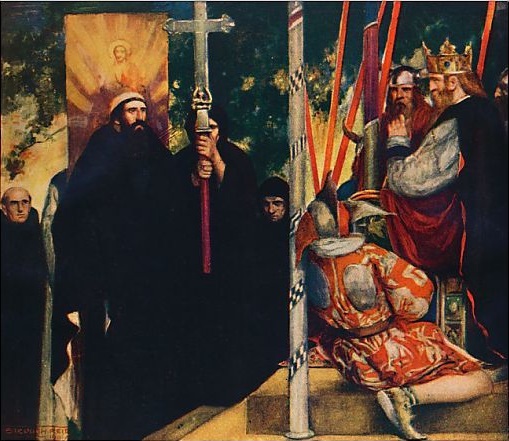 Artist Unknown
The Reception of Saint Augustine by Ethelbert', c. 1912

Augustine, and his band of twenty missionaries came bearing a silver cross with a painting of Jesus on a board and greeted Ethelbert by singing a prayer litany. He landed on the Isle of Thanet in east Kent in 597. Shortly thereafter, Æthelberht converted to Christianity, churches were established, and wider-scale conversion to Christianity began in the kingdom. He provided the new church with land in Canterbury, thus establishing one of the foundation stones of what ultimately became the Anglican Communion. Augustine.

Kent was rich, with strong trade ties to the continent. Coinage probably began circulating in Kent during his reign for the first time since the Anglo-Saxon settlement. He later came to be regarded as a saint for his role in establishing Christianity among the Anglo-Saxons. More on Saint Æthelberht of Kent

Please note that the content of this post primarily consists of articles available from Wikipedia or other free sources online.
at February 24, 2020