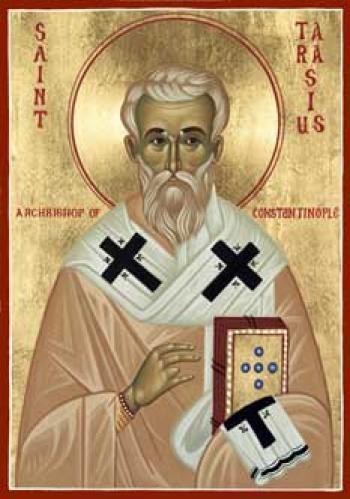 Tarasios was born and raised in the city of Constantinople. He was related to important families, and  embarked on a career in the secular administration and had attained the rank of senator, eventually becoming imperial secretary to the Emperor Constantine VI and his mother, the Empress Irene. Originally he embraced Iconoclasm, but later repented, resigned his post, and retired to a monastery.

Tarasios was selected as Patriarch of Constantinople by the Empress Irene in 784, even though he was a layman at the time. He reluctantly accepted, on condition that church unity would be restored with Rome and the oriental Patriarchs. 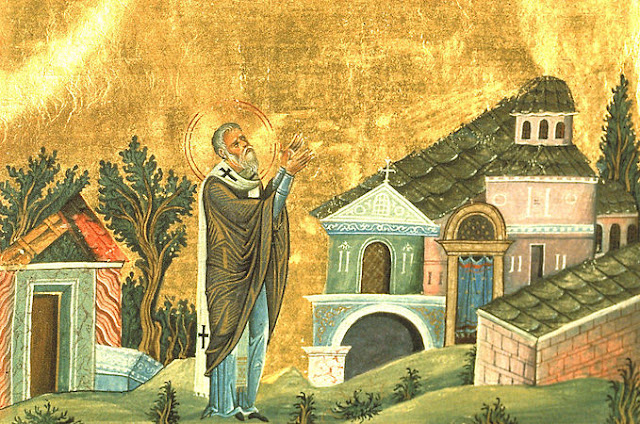 He reluctantly accepted, on condition that church unity would be restored with Rome and the oriental Patriarchs. To make him eligible for the office of patriarch, Tarasios was duly ordained to the deaconate and then the priesthood, prior to his consecration as bishop. 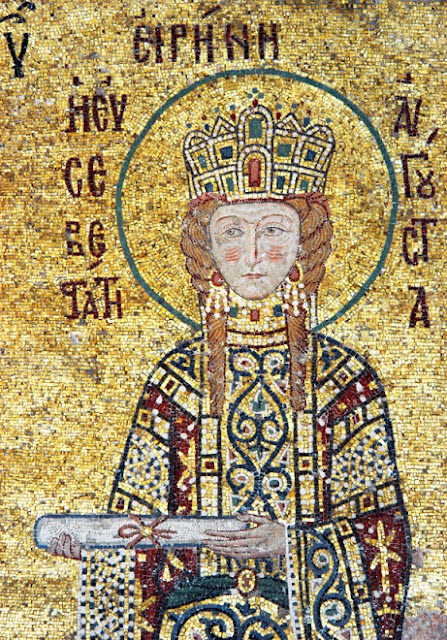 Empress Irene of the Byzantine Empire

"Empress Irene's main achievement during her reign was the settling of the Iconoclastic Controversy. Her predecessors had denounced and destroyed icons, were the living pictures of the saints, and Mary and Christ. The emperor had taken the Jewish and Muslim stance that these icons were idols. She was responsible for the eventual most important festival known as the Feast of Orthodoxy, which is still celebrated in the Eastern Orthodox Church."

Tarasios had demanded and obtained the promise that the veneration of icons would be restored in the church. As a part of his policy of improving relations with Rome, he persuaded Empress Irene to write to Pope Hadrian I, inviting him to send delegates to Constantinople for a new council, to repudiate heresy. The Pope agreed. The council convened in the Church of the Holy Apostles on 17 August 786. 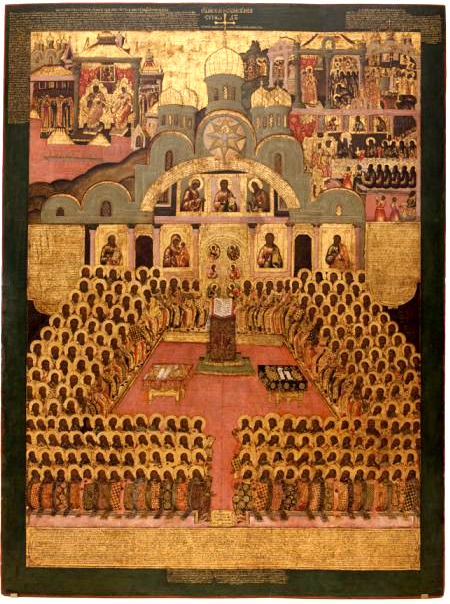 Simon Ushakov, (born 1626, Moscow, Russia—died June 25, 1686, Moscow), iconographer, portrait painter, builder of monuments, designer, cartographer, book illustrator, theoretician, and teacher who was the most distinguished Russian artist of the 17th century. He was for many years the head of the Imperial Icon Painting Workshop in the Kremlin Armory.


Ushakov lived during an era of great changes, and, like the masters of the Renaissance, he worked in a wide range of media. At the same time, he was representative of traditional Muscovite piety and an admirer of monasticism. One of the icons he painted was celebrated for its healing powers, and—according to the hagiography of Saint Hyllarion, who was related to Ushakov—miracles occurred in Ushakov’s Moscow home near the Church of the Trinity in Nikitniki. More on Simon Ushakov

The council, known as the Second Council of Nicaea, condemned Iconoclasm and formally approved the veneration of icons. The patriarch assumed a moderate policy towards former Iconoclasts.

Dionisius,15th c.
Empress Irene of Athens and Emperor Constantine VI at the Seventh Ecumenical Council in 787

Dionisius  (ca. 1440 – 1502) was acknowledged as a head of the Moscow school of icon painters at the turn of the 15th and 16th centuries. His style of painting is sometimes termed "the Muscovite mannerism". More on Dionisius

Tarasios became involved in a new controversy. In January 795, Emperor Constantine VI divorced his wife, Maria of Amnia, and Tarasios reluctantly condoned the divorce. The monks were scandalised by the patriarch's consent. The leaders of the protest, were exiled, but the uproar continued. Much of the anger was directed at Tarasios for allowing the subsequent marriage of the emperor to Theodote to take place, although he had refused to officiate.

Tarasios continued to loyally serve the subsequent imperial regimes. His reputation suffered from criticism of his alleged tolerance of simony. On the other hand, his pliability proved most welcome to three very different monarchs and accounts for Tarasios' continuation in office until his death.

Though some later scholars have been critical of what they perceive as Tarasios' weakness before imperial power, he continues to be revered in the Eastern Orthodox Churches for his defence of the use of icons, and his struggle for the peace and unity of the Church. More on Tarasios

Please note that the content of this post primarily consists of articles available from Wikipedia or other free sources online.
at February 25, 2020