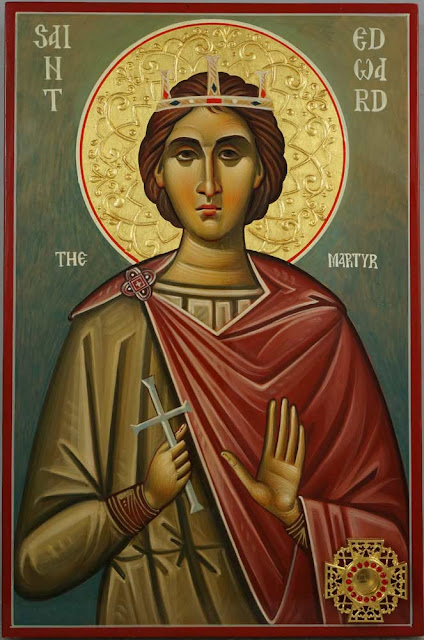 Edward the Martyr (c. 962 – 18 March 978) was King of England from 975 until he was murdered in 978. Edward was the eldest son of King Edgar the Peaceful but was not his father's acknowledged heir. On Edgar's death, the leadership of England was contested, with some supporting Edward's claim to be king and others supporting his younger half-brother Æthelred the Unready, recognized as a legitimate son of Edgar. Edward was chosen as king and was crowned by his main clerical supporters, the archbishops Dunstan of Canterbury and Oswald of York. 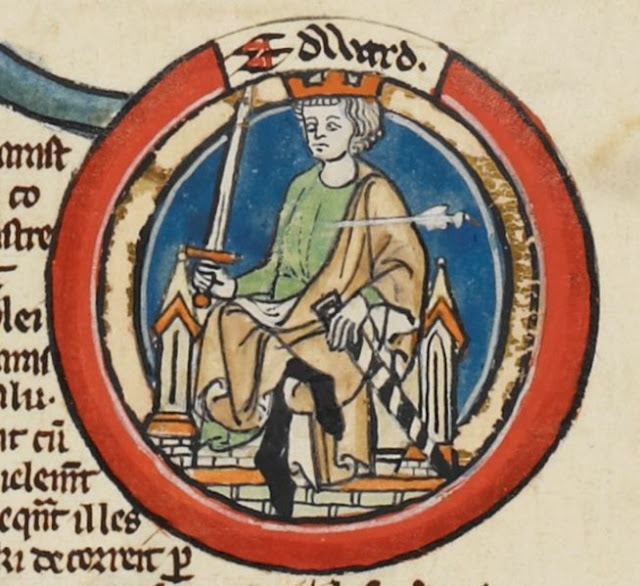 Miniature of Edward the Martyr in a 14th century royal genealogy
Parchment roll.
4750 x 275 mm.
The British Library Board

The great nobles of the kingdom, ealdormen Ælfhere and Æthelwine, quarrelled, and civil war almost broke out. In the so-called anti-monastic reaction, the nobles took advantage of Edward's weakness to dispossess the Benedictine reformed monasteries of lands and other properties that King Edgar had granted to them. 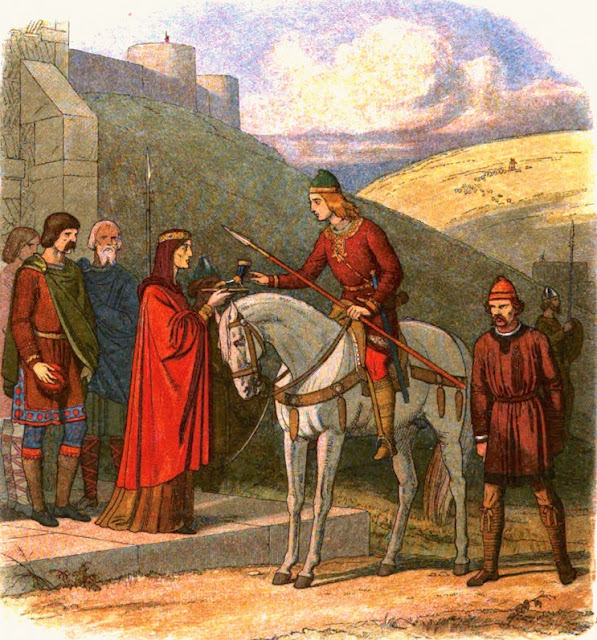 
Engraver, Edmund Evans  (1826–1905)
Edward the Martyr is offered a cup of mead by Ælfthryth, wife of Edgar, unaware that her attendant is about to murder him, c. 1864

James William Edmund Doyle (22 October 1822 – 3 December 1892), the eldest son of John Doyle (q.v.). He commenced life as a painter, and his picture of "Dr. Johnson reading the MS. of the Vicar of Wakefield" was engraved; but early in life he abandoned the profession of an artist to devote himself to historical studies. He had an extraordinary knowledge of history, heraldry and antiquities, but his extreme modesty of character and retiring nature prevented him making a remarkable figure in the world. He was author of "A Chronicle of England," with eighty-one coloured illustrations from his own drawings, published in 1864. The part of his life was devoted to his "Historical Baronage of England," a work of remarkable genius and research, absolutely unique both in its design and execution, published in 1886 in three volumes, 4to, with one thousand illustrations. The book, however, to his great chagrin and disappointment proved a financial failure. He died at 38 Dorset Square, London, on 3rd December, 1892. More on James William Edmund Doyle 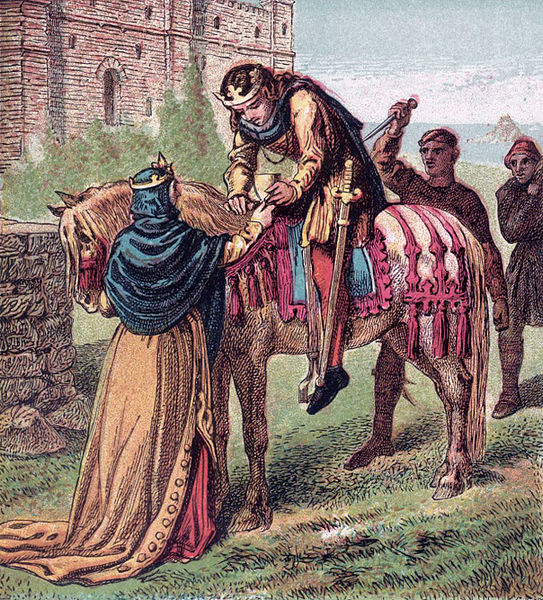 Joseph Martin Kronheim (1810–1896) was a German-born lithographer and wood engraver known for founding Kronheim & Co. and working with George Baxter. He moved to Edinburgh, via Paris, when he was 22 before becoming established at 32 Paternoster Row, London around 1846.

In 1850, Kronheim acquired a licence to operate the Baxter Process. Oscar Frauenknecht acquired a stake in the business in 1852 and it is said that the firm had produced over 1000 different subjects using the Baxter Process by 1854. They also produced a great number of prints for the Paris Exhibition in 1855 and at the end of the exhibition Kronheim sold his share of the business to Frauenknecht and retired to Germany.

Kronheim's retirement did not last long and he was soon to be found trying to set up a printing business in America. These exploits were also short lived, and he rejoined Frauenknecht and his old firm, Kronheim & Co. in London, although this time, not as a partner. The firm continued to expand, opening offices in Manchester and Glasgow.  In 1875 the firm stopped using the Baxter Process, having installed steam litho machines. Kronheim retired again in 1887 and died in Berlin in 1896 aged 85. More on Joseph Martin Kronheim

Edward's short reign was brought to an end by his murder at Corfe Castle in 978 in circumstances that are not altogether clear. He was hurriedly buried at Wareham, but was reburied with great ceremony at Shaftesbury Abbey early in 979. In 1001 Edward's remains were moved to a more prominent place in the abbey, probably with the blessing of his half-brother King Æthelred. Edward was already reckoned a saint by this time. 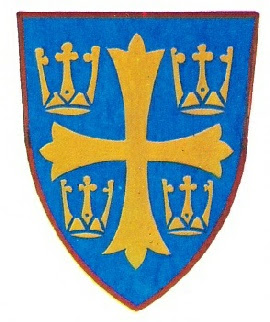 ARMS OF St. EDWARD THE MARTYR

Formal heraldry only appeared in the twelfth century, therefore this shield cannot be considered historically accurate. However later generations liked to design arms like these for the pre-Conquest Kings of England. Compare this version with the one you can see at the shrine.

A number of lives of Edward were written in the centuries following his death in which he was portrayed as a martyr, generally seen as a victim of the Queen Dowager Ælfthryth, mother of Æthelred. He is today recognized as a saint in the Eastern Orthodox Church, the Catholic Church, and the Anglican Communion. 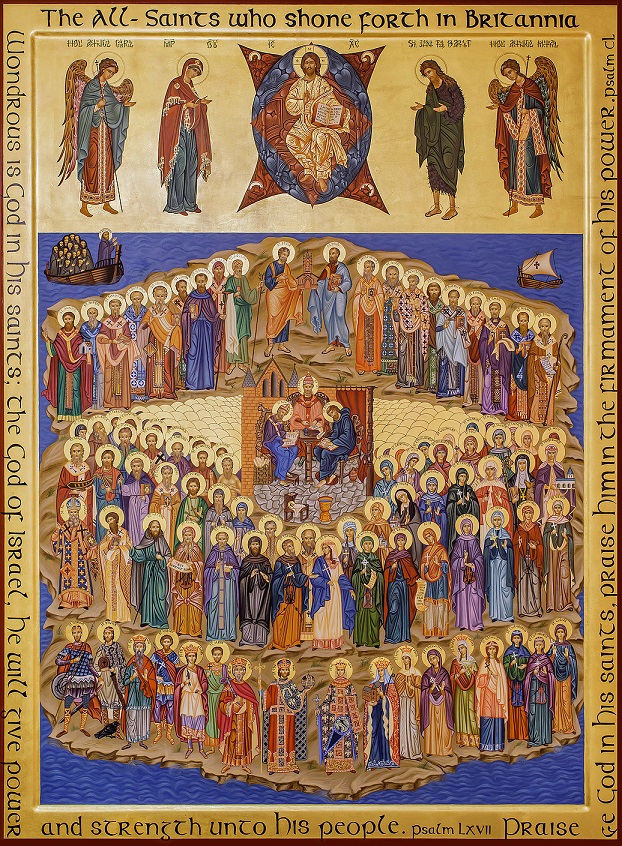 Saints of the British Isles

For more than a millennium, the British Isles were an Orthodox land. The holy Faith having first been brought to these islands by the Apostle of the Seventy, St Aristobulus. The result of this long Orthodox history is that the British Isles are replete with countless Orthodox saints. Some of these are well known (St Patrick of Ireland, St Chad of Lichfield, St Aidan of Lindisfarne, etc.), while others are much less widely known. More on British Saints