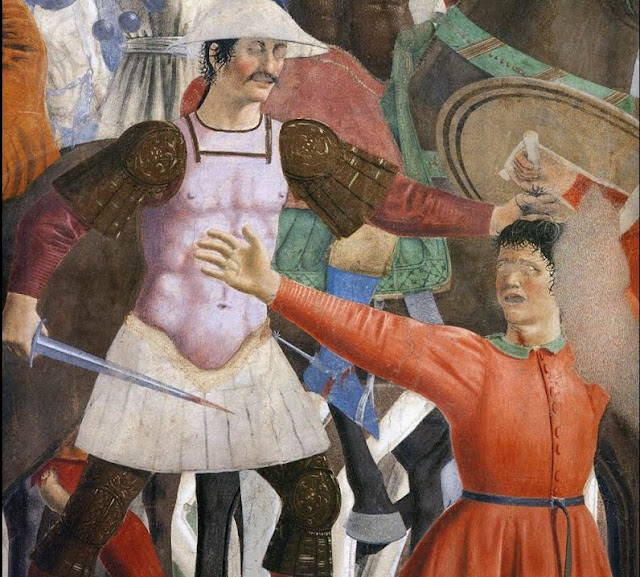 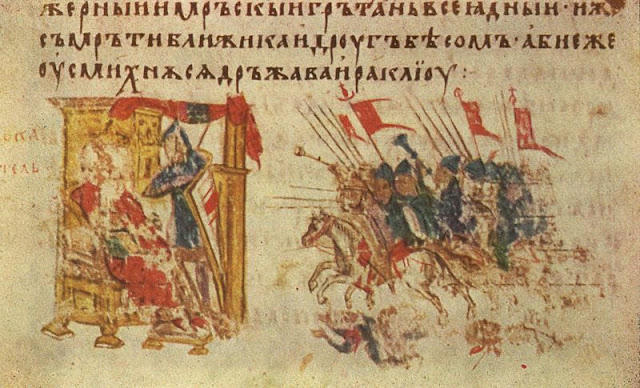 Unknown artist
Miniature 41 from the Constantine Manasses Chronicle, 14 century: Usurper Phocas and the assault against him from the armies of Heraclius

Heraclius's reign was marked by several military campaigns. The year Heraclius came to power, the empire was threatened on multiple frontiers. Heraclius immediately took charge of the Byzantine–Sasanian War of 602–628. 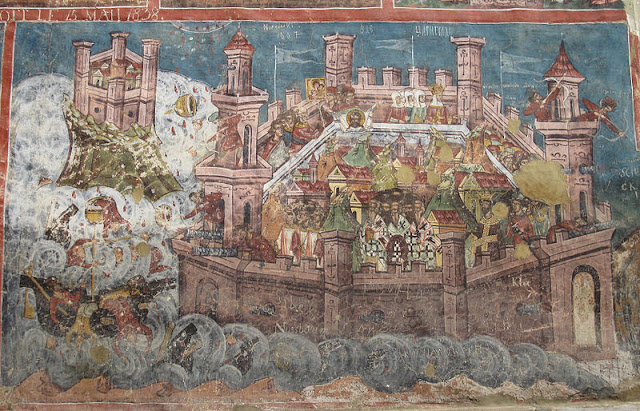 Unknown artist
The Siege of Constantinople (626) by the Avars on a mural at the Moldoviţa Monastery, Romania.

The first battles of the campaign ended in defeat for the Byzantines; the Persian army fought their way to the Bosphorus but Constantinople was protected by impenetrable walls and a strong navy, and Heraclius was able to avoid total defeat. Soon after, he initiated reforms to rebuild and strengthen the military.

Piero della Francesca (1415 – 1492) was an Italian painter of the Early Renaissance. As testified by Giorgio Vasari in his Lives of the Most Excellent Painters, Sculptors, and Architects, to contemporaries he was also known as a mathematician and geometer. Nowadays Piero della Francesca is chiefly appreciated for his art. His painting was characterized by its serene humanism, its use of geometric forms and perspective. His most famous work is the cycle of frescoes The History of the True Cross in the church of San Francesco in the Tuscan town of Arezzo. More on Piero della Francesca 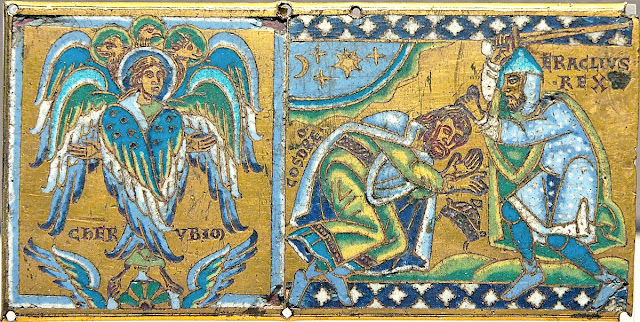 Heraclius drove the Persians out of Asia Minor and pushed deep into their territory, defeating them decisively in 627 at the Battle of Nineveh. The Persian king Khosrow II was overthrown and executed by his son Kavad II, who soon sued for a peace treaty, agreeing to withdraw from all occupied territory. This way peaceful relations were restored to the two deeply strained empires. 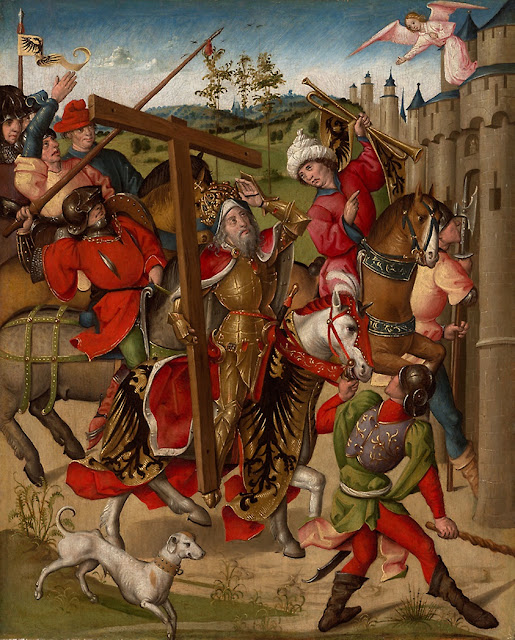 Heraclius, who rescued the True Cross and returned it to Jerusalem after its capture by Chosroës, king of Persia 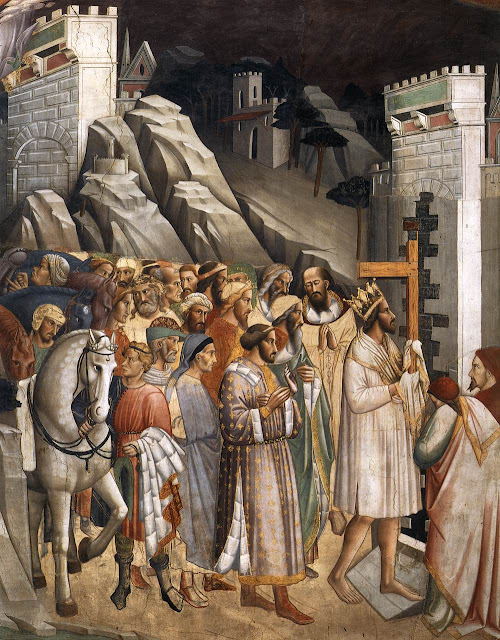 Emperor Heraclius is heading in triumph to Jerusalem with the Cross. Upon his arrival, however, the city gate closes itself up before him, and an angel indicates that the Emperor must enter the city not on horseback but rather - in remembrance of Christ - in a humble manner, whereupon Heraclius carries the Cross into the city on foot wearing only his shirt. Since Vasari, the profile image of the man watching the entry of the emperor from the right edge of the fresco has been regarded as a self-portrait of the artist. More on this work

Agnolo Gaddi, (born c. 1350, Florence [Italy]—died Oct. 16, 1396, Florence), son and pupil of Taddeo Gaddi, who was himself the major pupil of the Florentine master Giotto. Agnolo was an influential and prolific artist who was the last major Florentine painter stylistically descended from Giotto.


In 1369 he was employed in Rome as an assistant to his brother Giovanni, a minor painter, in the execution of frescoes for Pope Urban V in the Vatican. In the 1380s he executed his most ambitious works, a series of frescoes in the choir of Santa Croce in Florence illustrating the “Legend of the True Cross”. In these frescoes Agnolo sacrificed expression for design, and his overall concern with optical unification of the composition replaces Giotto’s concentration on figures, thereby revealing the new approach toward painting of the International Gothic style. Between 1383 and 1386 Agnolo designed medallions representing the virtues for the Loggia dei Lanzi in Florence, and between 1387 and 1395 his name appears as the designer or gilder of statues for the facade of the Cathedral of Florence. In 1394–96 he painted a cycle of scenes from the life of the Virgin in the Cathedral of Prato. His death in 1396 left unfinished an altar of the Crucifixion in San Miniato al Monte outside Florence. More on Agnolo Gaddi

Heraclius lost many of his newly-regained lands to the Muslim conquests. Emerging from the Arabian Peninsula, the Muslims quickly conquered the Sasanian Empire. In 634 the Muslims marched into Roman Syria, defeating Heraclius's brother Theodore. Within a short period of time, the Arabs conquered Mesopotamia, Armenia and Egypt.

Heraclius entered diplomatic relations with the Croats and Serbs in the Balkans. He tried to repair the schism in the Christian church in regard to the Monophysites, by promoting a compromise doctrine called Monothelitism. The Church of the East (commonly called Nestorian) was also involved in the process. Eventually this project of unity was rejected by all sides of the dispute.

Looking back at the reign of Heraclius, scholars have credited him with many accomplishments. He enlarged the Empire, and his reorganization of the government and military were great successes. His attempts at religious harmony failed, but he succeeded in returning the True Cross, one of the holiest Christian relics, to Jerusalem. More on Heraclius