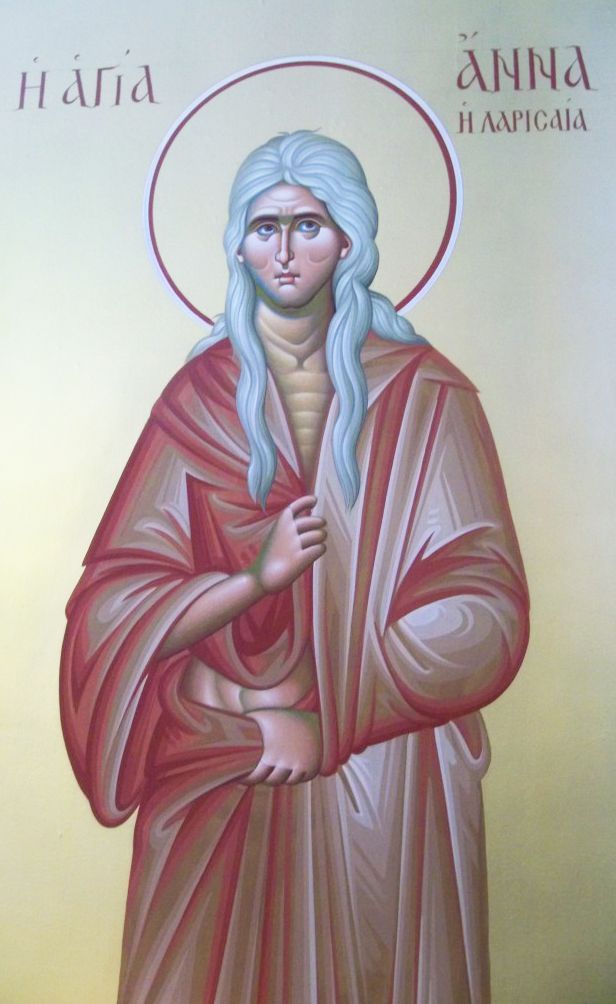 St Anna was from the country of Greece, from the city of Larissa; the daughter of poor parents. When they died and left her an orphan. 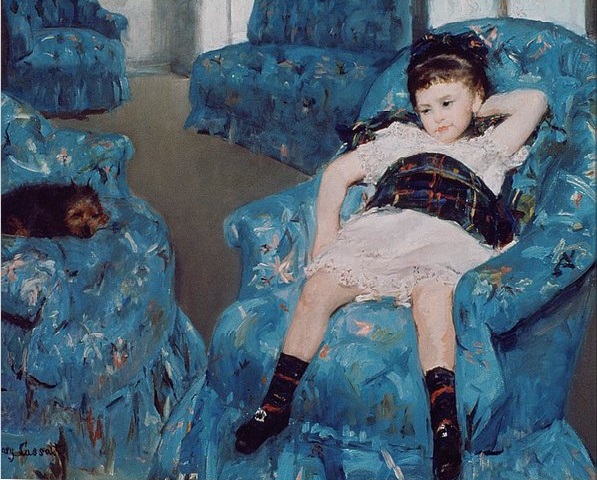 Mary Stevenson Cassatt (May 22, 1844 – June 14, 1926) was an American painter and printmaker. She was born in Allegheny City, Pennsylvania, but lived much of her adult life in France, where she first befriended Edgar Degas and later exhibited among the Impressionists. Cassatt often created images of the social and private lives of women, with particular emphasis on the intimate bonds between mothers and children.


She was described by Gustave Geffroy in 1894 as one of the three great ladies of Impressionism alongside Marie Bracquemond and Berthe Morisot. In 1879, Diego Martelli, compared her to Degas, as they both sought to depict movement, light, and design in the most modern sense. More on Mary Stevenson Cassatt

She was taken into the house of a nobleman and treated as an adopted child, she was cared for and educated in that house. The rich man considered her worthy to be married to his son; paying no attention to her poverty and lowly birth.

Though the reactions to the marriage were fierce, her step father would say "I am pleased with whatever my holy father has done for me." Since he raised her and knew her to be of great value and beauty, his first considerations were not riches and noble birth, but virtue which is attractive to God. 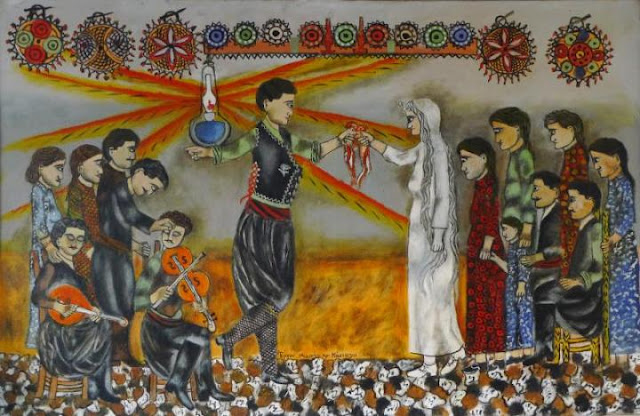 Kashalos, Cypriot, 1885-1974, had his own pictorial language. Self-taught, he remained unaffected by the teachings of formal education, depicting his subject with immediacy and purity, through the eyes of a man who has remained a child. Through his simplistic visual vocabulary he brought to the present recollections of Byzantine, Post-Byzantine and folk art styles, reinvigorating archetypal forms and formats. Kashialos gives a different view of reality as he perceives it. He did not use perspective- the entire scene takes place on the surface of the composition. The figures are depicted in profile, stylized, and immobilized in their activity. They recall figures of the Karakiozi, stuck upon the surface of the work.

The dimensions in his work are not based on scale. He sometimes simplified and painted in a more abstract manner; on other occasions he focused on detail. His colours are vibrant and expressive.

Kashialos produced the majority of his work in the 1960s. He was supported both by the state and important figures in the artistic and cultural world, and has since emerged as one of the most important artists of the newly formed Republic of Cyprus. More on Kashalos Michael

When the old man died, the family urged the son to put his wife away because of her low birth and to marry another more suited to his rank and wealth. The rich man's son feared God and did not want to do this. 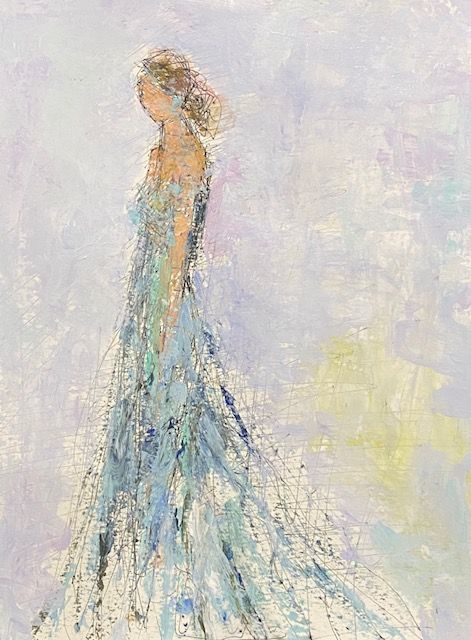 "Fashion and design inspire me.  When I was a child, I used to love to watch my mother, a fashion illustrator, draw beautiful women in elegant dresses.  Today, the figure and dress have become my creative voice, my way of expressing emotions using the language of color, line and composition.  Figure drawing feels like home to me, connecting me with my history, my first desires to create art.  My sketchbooks are scattered everywhere in my home and studio.  I like to unwind by drawing every evening for at least a half an hour.

I paint with modeling paste, gel mediums, acrylics and oil paint using spatulas, brushes and palette knives. My works on paper are evidence of my love of line drawing, pen and ink


In the end my figure paintings are more about emotion than anything else.  I search for the girl that lives within me, searching for ways to paint her feelings and emotions. I always come back to her. That is why I paint." Holly Irwin

Seeing her husband in difficulties with his family, Anna secretly left him and ran off to a distant deserted island of the Adriatic, where there was not a living soul. She was pregnant, and soon gave birth to a son. They laboured on the island for thirty years in fasting and prayer. 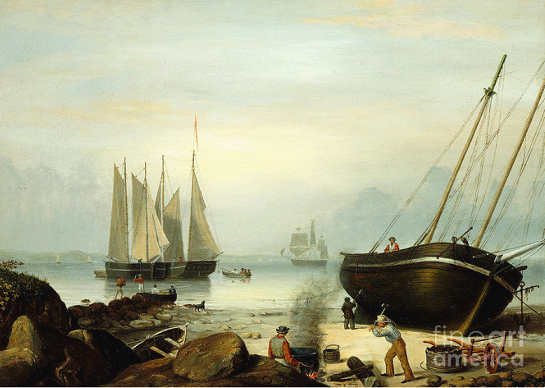 Fitz Hugh Lane (1804-1865) was an American marine painter whose works express the transition from the narrative to the highly personal and poetic style associated with luminism.

Fitz Hugh Lane was born in Gloucester, Mass., on Dec. 19, 1804. As a youth, he sketched the Massachusetts coastline around Cape Ann. In the mid-1830s his talents came to the attention of the eminent lithographer William Pendleton, who invited Lane to become an apprentice in his Boston firm.

Pendleton's shop provided Lane with his only formal training in art. During this time he saw exhibitions of 17th-century Dutch art at the Boston Athenaeum, as well as the city and harbor views. He was fascinated by the myriad activities along the harbor front and on the water.

In the summer of 1848 Lane made his first cruise along the Maine coast. Thereafter, he returned almost annually to explore the coast of Penobscot and Blue Hill bays and Mount Desert Island. Lane now began to paint quiet, evocative viewsr. He applied his paint more thinly and used a glazing technique to create effects of serenity and stillness. Occasionally a contemplative figure appears, to reinforce the sense of man's spiritual harmony with nature.

Lane's life and art were remarkably self-contained, although his light-filled canvases forecast the direction of American landscape painting in subsequent decades. He remained actively at work up to the time of his death on Aug. 13, 1865. More on Fitz Hugh Lane

Then, by divine providence, a hieromonk landed on the island. The ship that carried him was forced at one point, because of the winds, to stop at the uninhabited island of the Adriatic. The hieromonk took advantage of this forced docking of the ship to walk around the island. 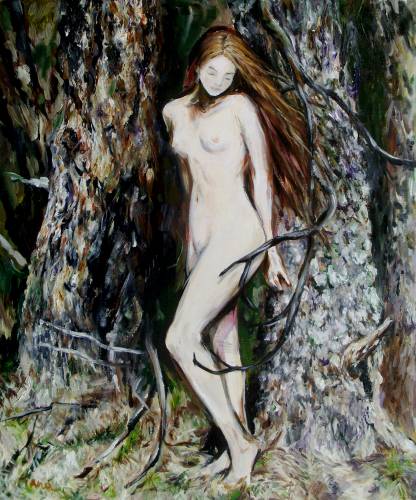 Tatyana Alexandrova was born on January 10 in 1929 in Kazan. However, spent her her childhood in Moscow. Her mother worked as a doctor and often had to stay overnight night opn duty. Her father worked as a logging engineer. He was rarely at home,.

During the war, she Tatyana worked as an educator. Then for the first time she composed an interesting story, which the children really liked. This subsequently led her to enroll in the Institute of Cinematography at the Faculty of Art. After training, she became a famous fairy tale writer.

Tatyana Alexandrova was also an artist. She often drew children, but so that they sat quietly and did not move, she told entertaining stories and fairy tales that the children listened with pleasure.

She died on December 23, 1983 from a severe illness. More on Tatyana Alexandrova

He had not gone far when he saw the "shadow of a naked person" telling him: "Man of God, if you wish to see my insignificance and to accord my humility the benefit of your prayers, throw me one of your garments; for I am a woman and naked, as you can see. It would be quite improper for me to show myself to your priestly perfection." The hieromonk obeyed the wishes of the Saint and offered her a garment. 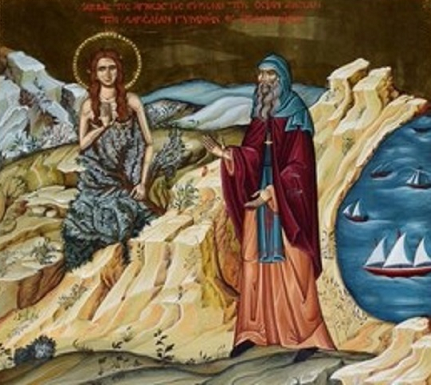 Unknown Artist
He saw the shadow of a naked person


From this pious priest she also asked the following: "I ask this also of your holiness: that you would bring a tunic for my son to put on after holy baptism, and also that you not tell anybody about me."

The hieromonk went to the ship to prepare for the Mystery of Baptism and Holy Communion without telling anyone anything. She waited for him and in turn led him to the place where her son was found. She asked her son to appear before the priest of saying: "Come out, child, and reverence the one who has come to illumine you." Her son obeyed. 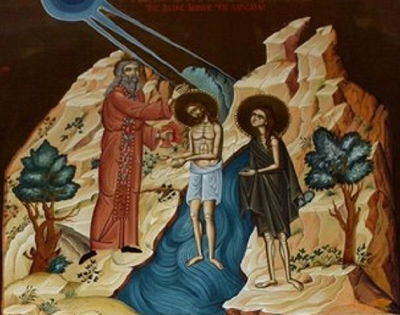 Unknown Artist
He baptised her son and named him John

He baptised her son and named him John. Anna lived her ascetic life in the fifth century, and died peacefully." More on Saint Anna and her son