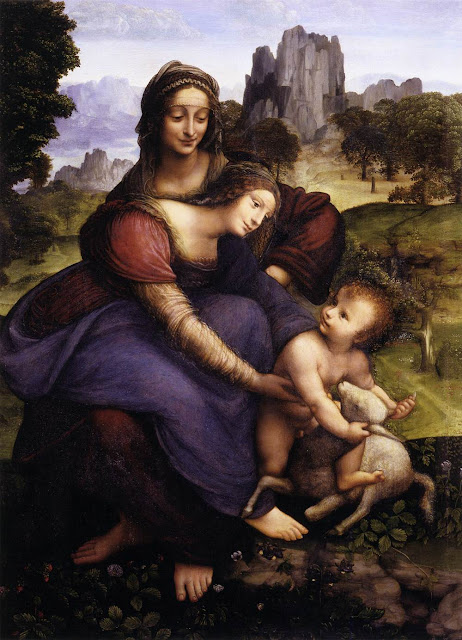 Melzi became Leonardo's pupil and life companion, and is considered to have been his favorite student. He accompanied Leonardo on trips to Rome in 1513 and to France in 1517. As a painter, Melzi worked closely with and for Leonardo. Some works which, during the nineteenth century, were attributed to Leonardo are today ascribed to Melzi.
Upon Leonardo's death, Melzi inherited the artistic and scientific works, manuscripts, and collections of Leonardo, and would henceforth faithfully administer the estate.
Returning to Italy, Melzi married, and fathered a son, Orazio. When Orazio died on his estate in Vaprio d'Adda, his heirs sold the collection of Leonardo's works." More on Francesco Melzi 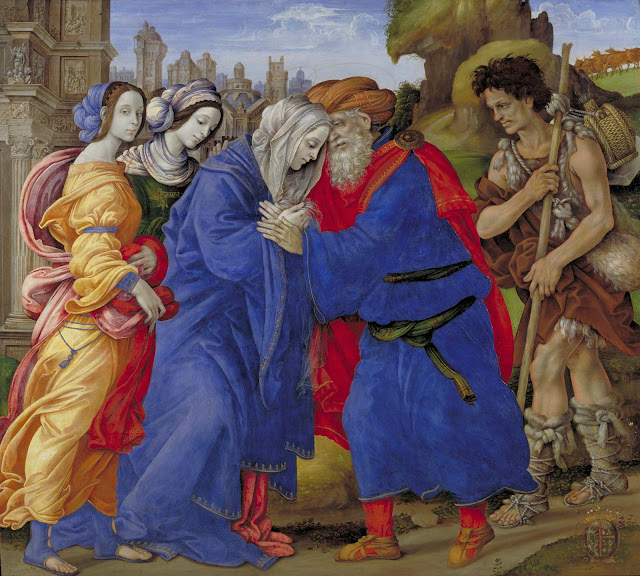 Filippino Lippi, 1497
The Meeting of Joachim and Anne Outside the Golden Gate of Jerusalem
Tempera on panel
National Gallery of Denmark, Copenhagen.

Filippino Lippi, (born c. 1457, Prato, Republic of Florence—died April 18, 1504, Florence) early Renaissance painter of the Florentine school whose works influenced the Tuscan Mannerists of the 16th century. After his father’s death, Filippino entered the workshop of Botticelli. By 1473 he had finished his apprenticeship. The style of Filippino’s earliest works stems from that of Botticelli, but Filippino’s use of line is less sensitive and subtle than Botticelli’s. In a group of paintings executed about 1480–85 he developed a harder and more individual style. Among the most notable works of this period is the Journey of Tobias (above). He was employed, along with Botticelli, Perugino, and Domenico Ghirlandaio, on the frescoed decoration of Lorenzo de’ Medici’s villa at Spedaletto and at the end of 1482 was commissioned to complete work left unfinished by Perugino in the Palazzo della Signoria in Florence. No trace of either work survives. Soon after (probably 1483–84) he was entrusted with the completion of the frescoes in the Brancacci Chapel in the Carmine, which had been left unfinished on Masaccio’s death in 1428.

After his return from Rome, Filippino executed a fresco of the Death of Laocoön for the villa of Lorenzo de’ Medici at Poggio a Caiano, in which some of the decorative devices used in the Carafa Chapel are again employed, and resumed work in the Strozzi Chapel (completed 1502), the frescoes of which anticipate Tuscan Mannerism of the 16th century. More on Filippino Lippi

Anna and Joachim were married and childless for about 50 years. This saddened them, and they vowed that should the Lord bless them with a child they would dedicate it to Him. Hoping their prayers would be answered, they brought gifts to the Lord's temple in Jerusalem on the yearly Feast of the Dedication and Feast of Lights. The priests, however, did not wish to accept them, since they were from a childless man, and Joachim was scorned. Publicly humiliated he soon remembered that Abraham whom God gave a son in his old age. He then retired to the wilderness to pray, were the Archangel Gabriel told him that his prayers have been heard, and that Anna will give birth to a daughter who shall be called Mary. 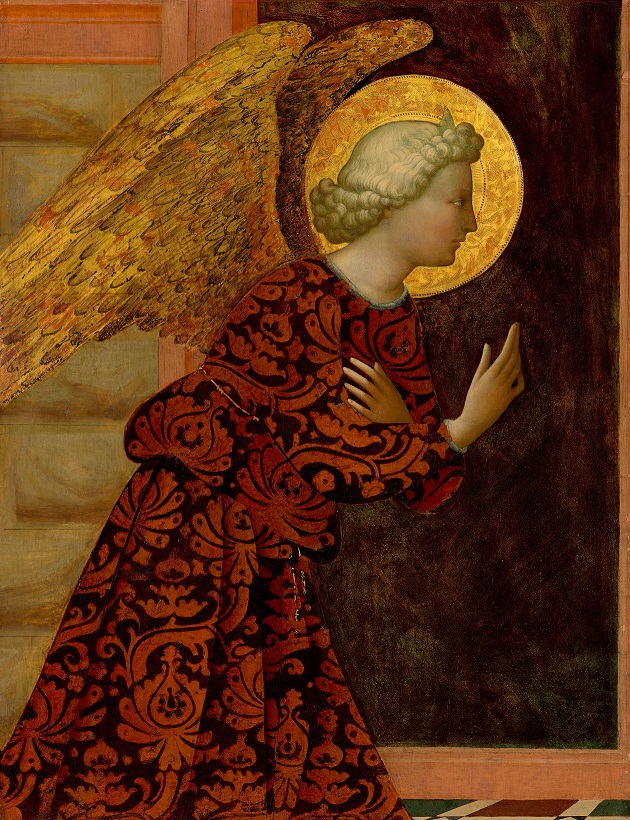 Masolino da Panicale (born 1383, Panicale, near Perugia, Romagna—died probably 1440–47, Florence) was a painter who achieved a compromise between the International Gothic manner and the advanced early Renaissance style of his own day and who owes his prominence in the history of Florentine art not to his innovations but to his lyrical style and his unfailing artistry.

In 1423, Masolino joined the Florentine guild Arte dei Medici e Spezial, which included painters as an independent branch He spent many years traveling, including a trip to Hungary from September 1425 to July 1427. He was selected by Pope Martin V, on the return of the papacy to Rome in 1420, to paint the altarpiece for his family chapel in the Basilica of Santa Maria Maggiore, and later by Cardinal Branda da Castiglione to paint the Saint Catherine Chapel in the Basilica of San Clemente, Rome. In the interim, he collaborated with his younger colleague, Masaccio, to paint the frescoes in the Brancacci Chapel in the Basilica of Santa Maria del Carmine, Florence, which were much admired by fellow artists throughout the fifteenth century. He painted a cycle of 300 famous historical figures in the Orsini Palace in Rome about 1433-4 and also worked in Todi. He spent his later years, after 1435, working for Cardinal Branda Castiglione in Castiglione Olona. More on Masolino da Panicale

The Archangel also reminded Joachim that, "according to your vow, she (Mary) shall be devoted to the Lord from her infancy, and she shall be filled with the Holy Spirit, even from her mother's womb. Mary shall not eat or drink anything unclean, nor shall her conversation or life be among the crowds of the people, but in the temple of the Lord, that it may not be possible to say, or so much as to suspect, any evil concerning her".

Anna, meanwhile, went home to her garden weeping bitterly. She sat under a laurel tree and prayed, "O God of our fathers, bless me and hear my prayer, as You opened the womb of Sarah and gave her a son Isaac". 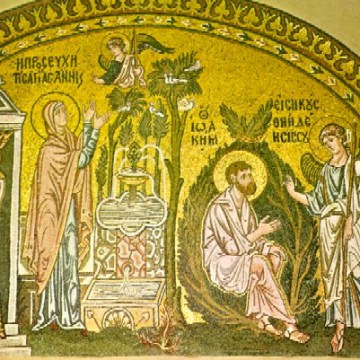 The same Archangel appeared to Anna and told her, "I am the angel who has presented your prayers and alms before God; and now I have been sent to you to announce that you shall bring forth a daughter, who shall be called Mary, and who shall be blessed above all women. She shall be full of the favour of the Lord, even from her birth. She shall remain in her father's house until she is weaned and, thereafter, she shall be delivered to the service of the Lord. She shall never know man, but alone and without precedent, as an immaculate and undefiled virgin, without intercourse with man, she shall bring forth a Son. She, His handmaiden, shall bring forth the Lord, both in grace, and in name, and in work, the Saviour of the world". Gabriel then said, "arise, therefore, and go up to Jerusalem; and when you arrive at the gate that, because it is plated with gold, is called 'Golden', there, for a sign, you shall meet your husband, for whose safety you have been anxious. When, therefore, you find these things accomplished, believe that all the rest which I have told you shall also undoubtedly be accomplished". 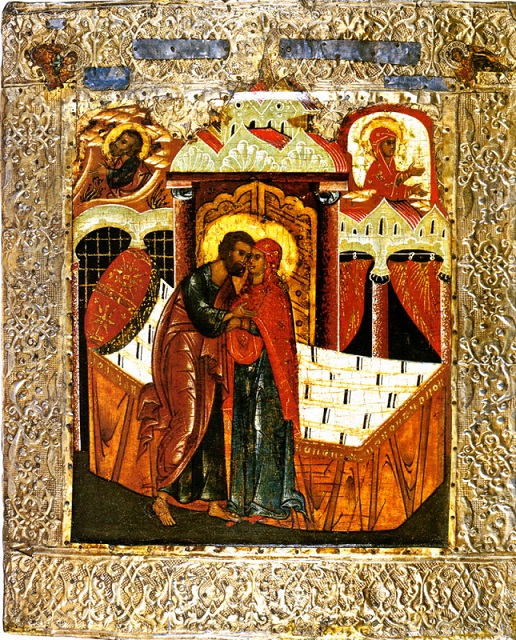 Unknown artist
Conception of the Theotokos, an Icon for Childbearing, 16th Century
I have no further description of this artwork at this time

The icon of the Conception of the Theotokos is very simple. Joachim and Anna tenderly embrace, standing before a bed. Without being explicit, it is boldly confessed that, whilst a miracle granted to a barren couple, the conception of St Mary happened through natural means. This can be compared with Icons of the Annunciation, which could be described as the Conception of Jesus Christ: in those icons Mary is not shown with Joseph; Mary remained a virgin. More on this Icon

On the following day, Joachim brought his offerings into the temple, worshipped the Lord, and then returned home. There was great joy and celebration when it was heard that Anna conceived. 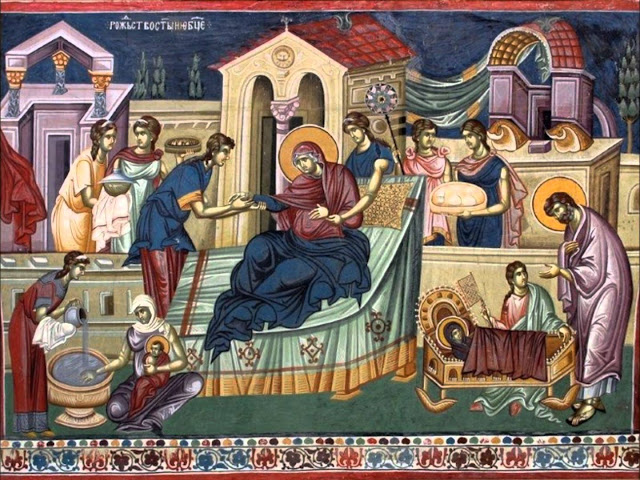 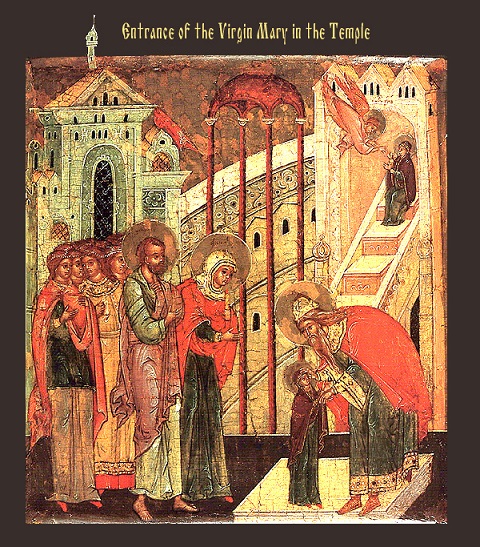 When Mary was three years old, her parents, after offering up their sacrifice, left her to be brought up with the other maidens in the apartments of the temple. 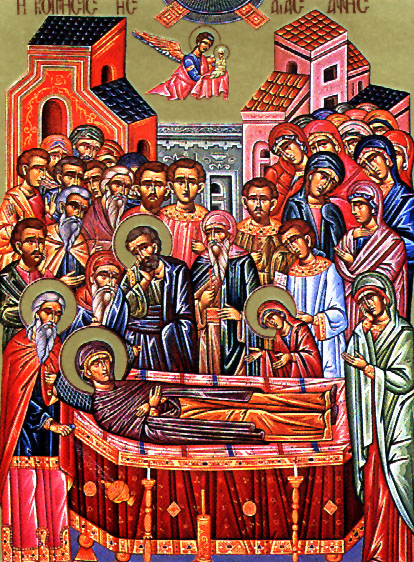 For the next seven years, Anna and Joachim visited Mary often until they reposed, leaving her an orphan. According to Tradition, she died peacefully in Jerusalem at age 79, before the Annunciation to the Most Holy Theotokos. More on Saint Anna

Thank you for visiting my blog and also for liking its posts and pages.
Please note that the content of this post primarily consists of articles available from Wikipedia or other free sources online.
at July 25, 2020