09 works, Today, August 15th, is the Dormition of the Virgin Mary day, her story illustrated #227 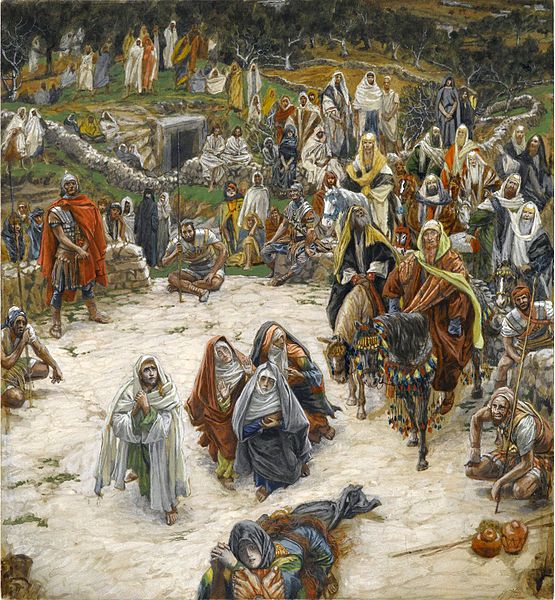 Hanging on the Cross in agony, Jesus remembered His Mother, and indicating the Apostle John He said to her: Woman, behold thy son. After that, He said to John: Behold thy mother. And so, providing for His Mother, He breathed His last.
John had a home on Mount Zion, in Jerusalem, in which the Theotokos then lived. She dwelt there to the end of her days on earth. By her prayers, kind guidance, meekness and patience, she greatly assisted her Son’s apostles. 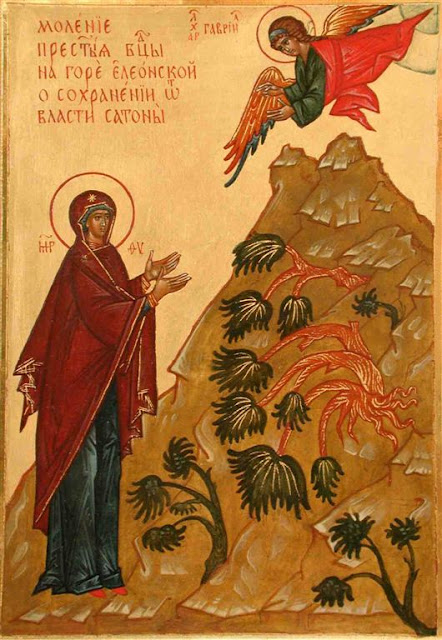 Unknown artist
The Theotokos praying at the Mount of Olives, and the trees bowing in honor
I have no further description, at this time
She spent most of her remaining time on earth in Jerusalem, often visiting those places that reminded her of the great events and of the great works of her Son. She especially visited Golgotha, Bethlehem, and the Mount of Olives. Of her few distant journeys, her visit to St. Ignatius the God-bearer in Antioch is recorded; as is her visit to Lazarus (whom Jesus resurrected on the fourth day), who was by then the Bishop of Cyprus. 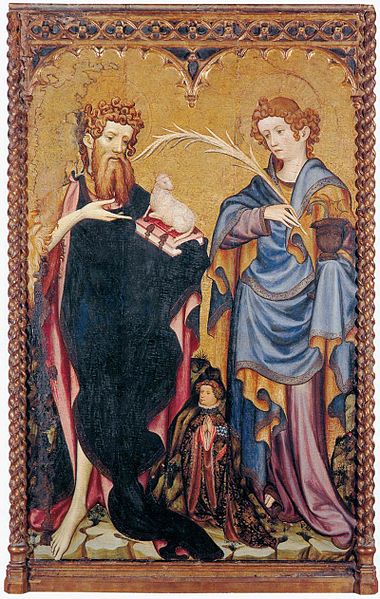 Joan mates  (1370–1431)
Saint John the Baptist and Saint John the Evangelist with Donor, c. 1410
Tempera on panel
Height: 191 cm; Width: 121 cm
Thyssen-Bornemisza museum,  Madrid, Spain
Juan Mates (or Joan Mates ) or master of Peñafiel 1 , born around 1370 in Vilafranca del Penedès and died in 1431 in Barcelona , was a Spanish painter of sacred art .
Mates was active in Barcelona between 1391 and 1431. He is known for the altarpieces of Saint Martin and Saint Ambrose in Barcelona Cathedral, the altarpiece of Saint James in Tarragona Cathedral and the two altarpieces of Saint John. currently divided evangelist.
Originally from Vilafranca del Penedès , he moved to Barcelona in 1390 , in the studio of Pere Serra , with whom he worked for a long time. When his master died, he recovered his orders.
Juan Mates maintained a relationship with high officials of the Church and the Catalan nobility, as well as with patrons . He thus carried out various commissions destined for several places in Aragon and Catalonia .
Mates established an active workshop in which he had as main collaborators his son Bernat Mates and his son-in-law Francesc Oliva between 1425 and 1462. The lack of artistic talent of his son and the precode death of his son-in-law caused the disappearance of the family affair shortly after Juan Mates' death the same year. More on Juan Mates
She also visited Mouth Athos, which she blessed; and she stayed in Ephesus with St. John the Evangelist during the time of the great persecution of Christians in Jerusalem.
In her old age, she often prayed to her Lord and God on the Mount of Olives, the site of His Ascension, that He take her from this world as soon as possible. 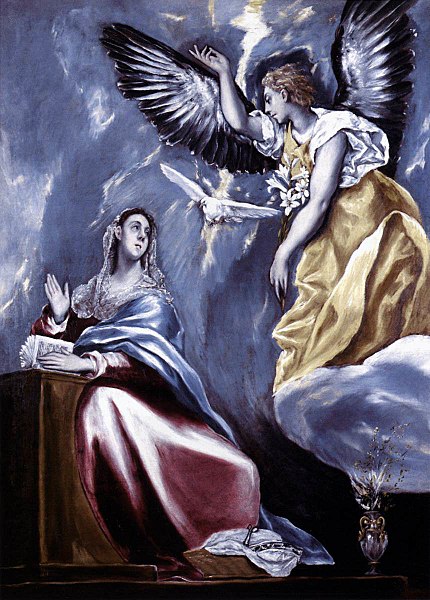 Doménikos Theotokópoulos (1541 – 7 April 1614), most widely known as El Greco; Spanish for "The Greek", was a painter, sculptor and architect of the Spanish Renaissance. The nickname "El Greco" refers both to his Greek origin and Spanish citizenship. The artist normally signed his paintings with his full birth name in Greek letters.

El Greco was born in Crete, which was at that time part of the Republic of Venice, and the center of Post-Byzantine art. He trained and became a master within that tradition before traveling at age 26 to Venice, as other Greek artists had done. In 1570 he moved to Rome, where he opened a workshop and executed a series of works. During his stay in Italy, El Greco enriched his style with elements of Mannerism and of the Venetian Renaissance. In 1577, he moved to Toledo, Spain, where he lived and worked until his death. In Toledo, El Greco received several major commissions and produced his best-known paintings.

El Greco's dramatic and expressionistic style was met with puzzlement by his contemporaries but found appreciation in the 20th century. El Greco is regarded as a precursor of both Expressionism and Cubism, while his personality and works were a source of inspiration for poets and writers. El Greco has been characterized by modern scholars as an artist so individual that he belongs to no conventional school. He is best known for tortuously elongated figures and often fantastic or phantasmagorical pigmentation, marrying Byzantine traditions with those of Western painting. More on El Greco

On one of these occasions, the Archangel Gabriel appeared to her and revealed to her that she would find repose within three days. The angel gave her a palm-branch, which was to be carried in her funeral procession. She returned home with great joy, hoping in her heart to see her Son’s apostles just once more in this life.
The Lord fulfilled her wish, and the apostles, borne by angels in the clouds, gathered together at the house on Mount Zion. With great rejoicing she saw them, encouraged them, counseled them, and comforted them. 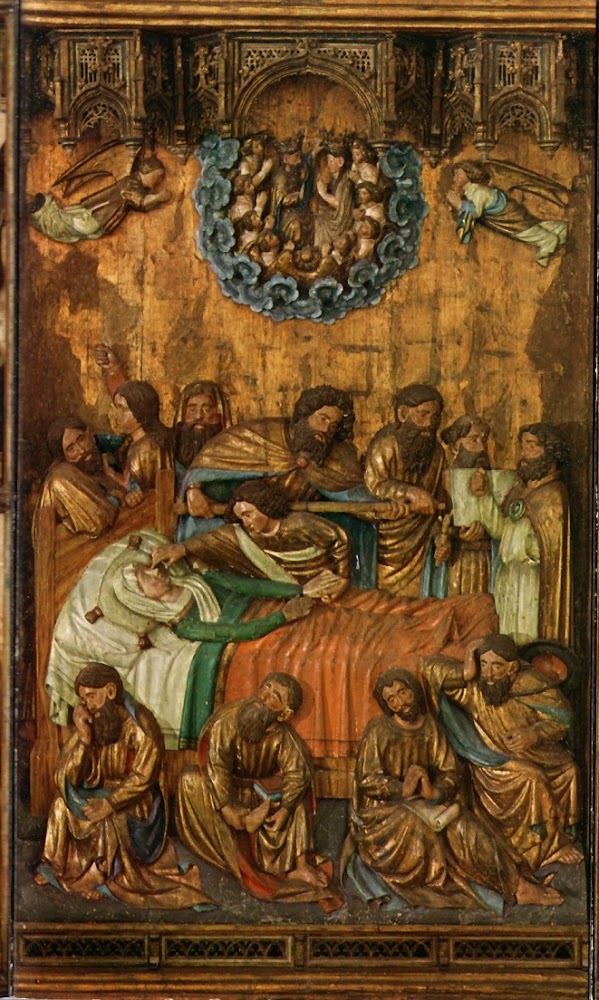 Mestari Francke, (1380–1435)
Dormition of the Mother of God, c. 1410
Central panel of inner wings in Barbara-altar,  Kalanti church in Finland
Painted oak wood relief
The National Museum of Finland, Helsinki, Finland
Master Francke O.P. (or Meister Francke, Frater Francke) was a North German Gothic painter and Dominican friar, born ca. 1380 in the Lower Rhine region or possibly Zutphen in the Netherlands, who died ca. 1440, probably in Hamburg, where he was based at the end of his known career. He may have trained as an illuminator and painter in France or the Netherlands, and later worked in Münster, before joining in St John's Priory in Hamburg by 1424 at the latest.
Francke was almost forgotten as an artist after the Renaissance , until Alfred Lichtwark, director of the Hamburg Art Gallery, brought him back into public consciousness, as did Master Bertram.
Two main altarpieces attributed to him survive, dedicated to St Thomas of Canterbury and Saint Barbara, in an unusually intense style, showing awareness of French and Early Netherlandish court art. More on Master Francke
Then she peacefully gave her soul to God without pain or physical illness. The apostles took up her coffin, from which a heavenly fragrance arose – and, in the company of many Christians, bore it to the Garden of Gethsemane, to the sepulcher of her parents, Saints Joachim and Anna. 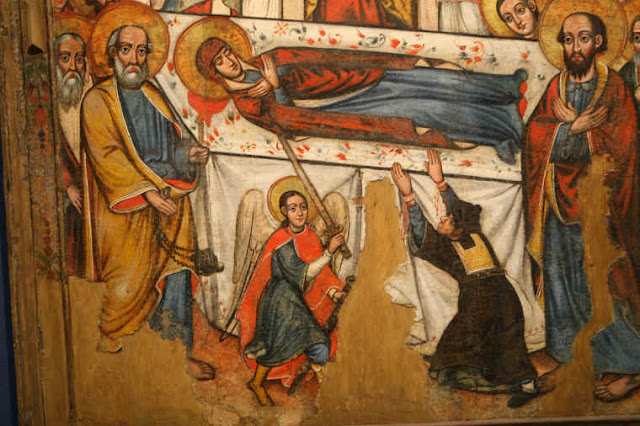 Unknown artist
Jewish Priest Athonios grabbed the coffin
I have no further description, at this time 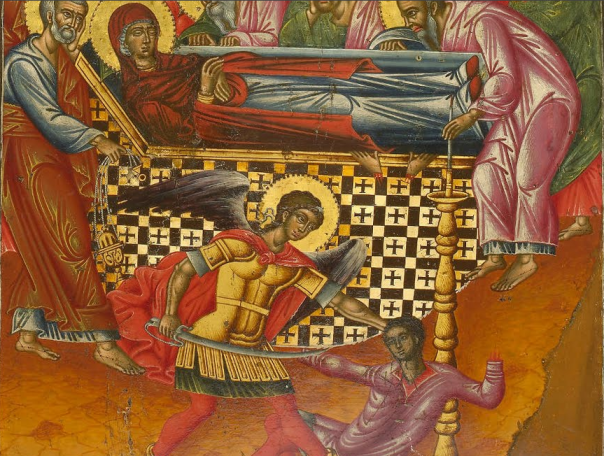 Unknown artist
An angel of God severed both of Athonios' his hands
I have no further description, at this time
By God’s providence, the procession was concealed by a cloud from the Jews. Even so, Aphthonius, a Jewish priest, grabbed the coffin with the intention of overturning it, but an angel of God severed both his hands. He then cried out to the apostles for help, and was healed upon declaring his faith in the Lord Jesus Christ. 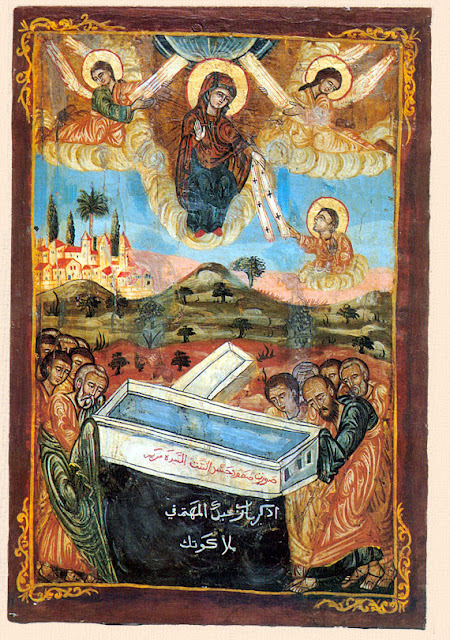 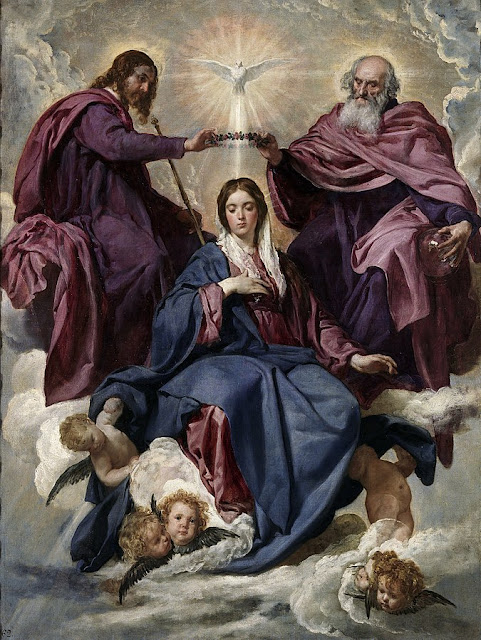 Diego Rodríguez de Silva y Velázquez (baptized June 6, 1599 – August 6, 1660) was a Spanish painter, the leading artist in the court of King Philip IV, and one of the most important painters of the Spanish Golden Age. He was an individualistic artist of the contemporary Baroque period. In addition to numerous renditions of scenes of historical and cultural significance, he painted scores of portraits of the Spanish royal family, other notable European figures, and commoners, culminating in the production of his masterpiece Las Meninas (1656).

From the first quarter of the nineteenth century, Velázquez's artwork was a model for the realist and impressionist painters, in particular Édouard Manet. Since that time, famous modern artists, including Pablo Picasso, Salvador Dalí and Francis Bacon, have paid tribute to Velázquez by recreating several of his most famous works. More on Diego Velázquez

That evening, the Theotokos, surrounded by a host of angels, appeared to the apostles and said to them: “Rejoice, I will be with you always.” The Theotokos’ age at the time of her Dormition is not known exactly, but the overwhelming opinion is that she was over sixty years of age. More on the Dormition of the Virgin Mary
The Dormition tradition is associated with various places, most notably with Jerusalem, which contains Mary's Tomb and the Basilica of the Dormition, and Ephesus, which contains the House of the Virgin Mary, and also with Constantinople where the Cincture of the Theotokos was enshrined from the 5th through 14th centuries.
The feast of the Dormition was being observed in Jerusalem shortly after the Council of Ephesus.
The earliest Dormition traditions surface in manuscripts at some point in the late 5th century, when three distinct narrative traditions describing the end of Mary's life suddenly appear.
Emperor Maurice (582–602) issued an edict which set the date for the celebration of the Dormition on August 15.