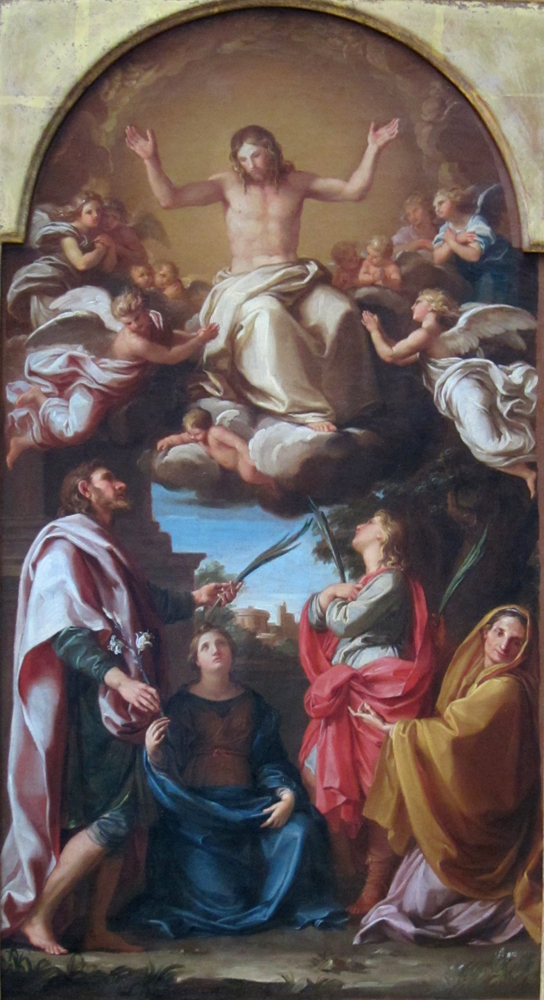 
Saint Julian was born in Antioch, the metropolis of Syria, and was the only son of his parents, who were illustrious, rich, and Christians who feared God. They raised him in praiseworthy customs, and endeavored, to be taught in all good letters, which he learned easily At that time there were many Christians and saints in Antioch, whom he visited with a desire to imitate them.

St. Julian and St. Basilissa, though engaged in a married state, they lived in perpetual chastity, sanctified themselves by the most perfect exercises of an ascetic life. They employed their revenues in relieving the poor and the sick; for this purpose they converted their house into a kind of hospital. They attracted thousands to the monastic life.

When the persecution of Diocletian was proclaimed in 303, they were arrested along with their followers. Basilissa was executed first, along with the women of their monastery. Later Julian and the men were put into barrels of burning pitch, but this did not harm them. Seeing this miracle, the governor's son Celsus converted to Christianity. When he and the others were sent back to prison he asked that his mother Marcianilla be sent in to see him. When she did, a miraculous vision convinced her to become a Christian as well. Later, at the Christians' prayers, the temple of the pagans sank into the earth, but even this did not sway the governor, who had them beheaded.

He was noted for miracles and having raised a dead man to life. More on St. Julian and St. Basilissa

Pompeo Girolamo Batoni (25 January 1708 – 4 February 1787) Pompeo Batoni was born in Lucca. He moved to Rome in 1727, and apprenticed with Agostino Masucci, Sebastiano Conca and/or Francesco Imperiali. He displayed a solid technical knowledge in his portrait work and in his numerous allegorical and mythological pictures. Batoni won international fame largely thanks to his customers, mostly British of noble origin, whom he portrayed, often with famous Italian landscapes in the background.

In addition to art-loving nobility, Batoni's subjects included the kings and queens of Poland, Portugal and Prussia, the Holy Roman Emperors Joseph II and Leopold II (a fact which earned him noble dignity), as well the popes Benedict XIV, Clement XIII and Pius VI, Elector Karl Theodor of Bavaria and many more. He also received numerous orders for altarpieces for churches in Italy (Rome, Brescia, Lucca, Parma, etc.), as well as for mythological and allegorical subjects.

Batoni's style took inspiration and incorporated elements of classical antiquity, French Rococo, Bolognese classicism, and the work of artists such as Nicolas Poussin, Claude Lorrain and especially Raphael. As such Pompeo Batoni is considered a precursor of Neoclassicism. More on Pompeo Girolamo Batoni

Thank you for visiting my blog and also for liking its posts and pages.
at January 09, 2019