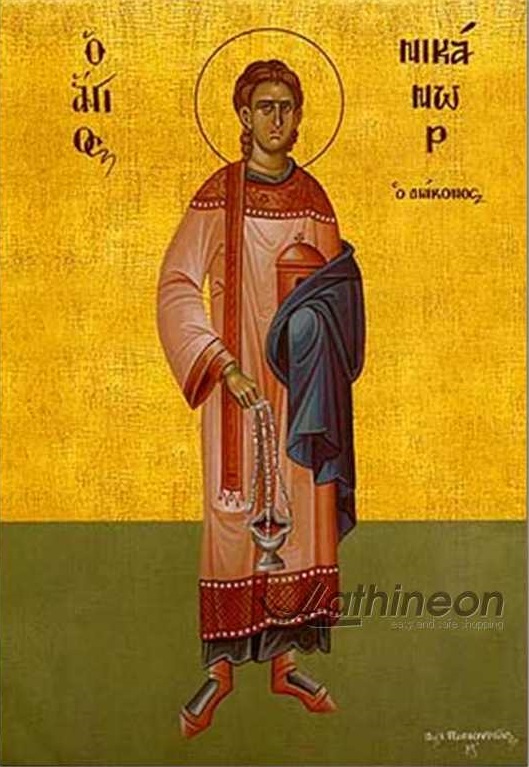 Saint Nicanor
The apostle and the deacon

Saint Nicanor: Early martyr and one of the seven deacons of Jerusalem. He was a resident of Jerusalem, and was chosen by the Apostles to minister to the Hellenistic widows and others. In the Acts of the Apostles, Nicanor, whose name means victorious, has been traditionally accounted a Jew from Cyprus who lived in Jerusalem. Little is known of his life. Some say he died with Stephen, the first martyr, while others say that when the remaining deacons disbanded, after the death of Stephen, Nicanor became a missionary to the Gentiles and travelled to Cyprus. The Annales of Cesar Baronius (1538-1607), now considered historically worthless, say Nicanor was martyred c. 76 on his native island under Vespasian. Other legends say he was was stoned to death in Jerusalem. Modern scholars believe Nicanor died in peace. Karen Rae Keck 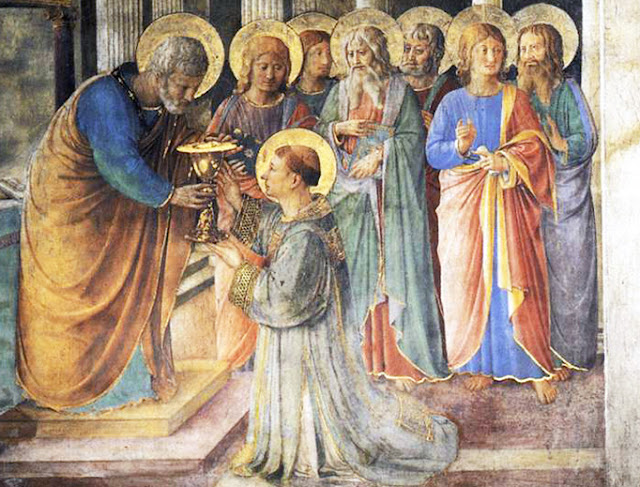 The Seven, often known as the Seven Deacons, were leaders elected by the Early Christian church to minister to the community of believers in Jerusalem, to enable the Apostles to concentrate on 'prayer and the Ministry of the Word'. According to later tradition they are supposed to have also been among the Seventy Disciples who appear in the Gospel of Luke. Although the Seven are not called 'deacons' in the New Testament, their role is described as 'diaconal', and they are therefore often regarded as the forerunners of the Christian order of deacons. More on The Seven Deacons

Fra Angelico (born Guido di Pietro; c. 1395 – February 18, 1455) was an Italian painter of the Early Renaissance, described by Vasari in his Lives of the Artists as having "a rare and perfect talent".

He was known to contemporaries as Fra Giovanni da Fiesole and Fra Giovanni Angelico . In modern Italian he is called Beato Angelico; the common English name Fra Angelico means the "Angelic friar".

In 1982, Pope John Paul II proclaimed his beatificatio in recognition of the holiness of his life, thereby making the title of "Blessed" official. Fiesole is sometimes misinterpreted as being part of his formal name, but it was merely the name of the town where he took his vows as a Dominican friar, and was used by contemporaries to separate him from others who were also known as Fra Giovanni.

Vasari wrote of Fra Angelico that "it is impossible to bestow too much praise on this holy father, who was so humble and modest in all that he did and said and whose pictures were painted with such facility and piety." More on Fra Angelico