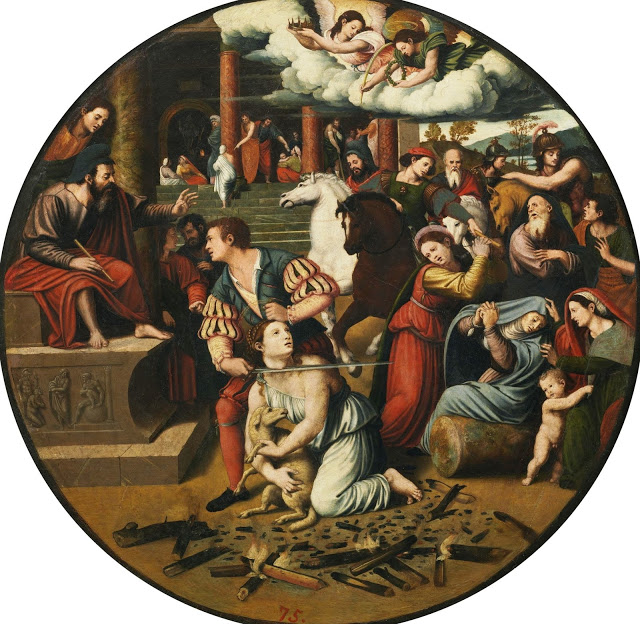 Vincente Macip (known in Valencia towards 1490-1550)
Martyrdom of St Agnes, circa 1540 and circa 1545
Oil on panel
58 centímetros de diámetor
Prado Museum

The Museo del Prado owns two of his paintings representing the Visitation and the Martyrdom of St. Agnes, executed for the chapel of St. Thomas of Villanova in the convent of San Julián de Valencia. Somewhat overshadowed by the fame of his son who had more of an emotional style, but certainly better equipped, experts doubt the attribution of some works between parent and child, especially those who had been attributed the father. More on this painting

Agnes of Rome (c. 291 – c. 304) was a popular saint about whom little is known, Agnes is said to have been a beautiful, wealthy Roman maiden who had, in childhood, dedicated herself to God. Some say that a rejected suitor betrayed her to authorities; others say that she was asked at 13 to sacrifice to the gods and marry, both of which she refused. Legends tell of her being thrown into a brothel, where her purity was miraculously preserved. Having escaped that fate, she was martyred. In the IV Century, Constantia, the daughter of Constantine, built a basilica on the site of her tomb. St. Ambrose wrote about Agnes in De virginitate, and Damasus I wrote an epitaph for her. Prudentius composed a hymn in her honor. Her emblem in art is the lamb because of the similarity between her name and the Latin word for lamb, agnus. More on Agnes

Vicente Juan Masip (La Font de la Figuera 1507 – Bocairent 1579) was a Spanish painter of the Renaissance period. He is commonly considered the foremost member of the Valencian school of painters. Born in La Font de la Figuera, he is said to have studied his art for some time in Italy due to Sebastiano del Piombo's influence, with which school his affinities are closest, but maybe he never went to Italy, and he received this influence by the Italian peintures arriving to Valencia. Furthermore, two Italian painters Paolo da San Leocadio and Francesco Pagano, were engaged by cardinal Rodrigo Borgia for painting in Valencia Cathedral. Otherwise, the greater part of his professional life was spent in the city of Valencia, where most of the extant examples of his work are now found. All relate to religious subjects, and are characterized by dignity of conception, accuracy of drawing, beauty of color, and minuteness of finish. He died at Bocairent (near Xàtiva) while working on an altarpiece in the church there.

He never painted a profane subject, and emulated Luis de Vargas and Fra Angelico, in never painting unless he had received holy communion. Painting for him was a solemn exercise, an oratory process, full of prayers and fasts. He never lacked church patronage; the archbishop of Valencia, St. Thomas of Villanova, ordered a set of cartoon panels about the Life of the Virgin to model for some tapestries. He also painted for the churches of the Jesuits, Dominicans, Minims, Augustinians, Franciscans, and for the churches of San Nicolás, Santa Cruz, Carmen Calzado, St Esteban, Corona, Temple, San Andrés, San Bartolomé and San Miguel de los Reyes. More on Vicente Juan Masip