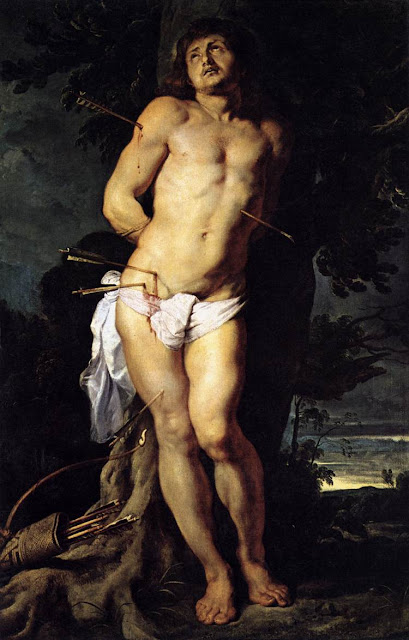 Sir Peter Paul Rubens (28 June 1577 – 30 May 1640) was a Flemish Baroque painter. A proponent of an extravagant Baroque style that emphasized movement, colour, and sensuality, Rubens is well known for his Counter-Reformation altarpieces, portraits, landscapes, and history paintings of mythological and allegorical subjects.

In addition to running a large studio in Antwerp that produced paintings popular with nobility and art collectors throughout Europe, Rubens was a classically educated humanist scholar and diplomat who was knighted by both Philip IV of Spain and Charles I of England.  More Sir Peter Paul Rubens

Saint Sebastian (died c. 288 AD) was an early Christian saint and martyr. Sebastian had prudently concealed his faith, but in 286 was detected. Diocletian reproached him for his betrayal, and he commanded him to be led to a field and there to be bound to a stake so that archers from Mauritania would shoot arrows at him. "And the archers shot at him till he was as full of arrows as an urchin is full of pricks, and thus left him there for dead." Miraculously, the arrows did not kill him. 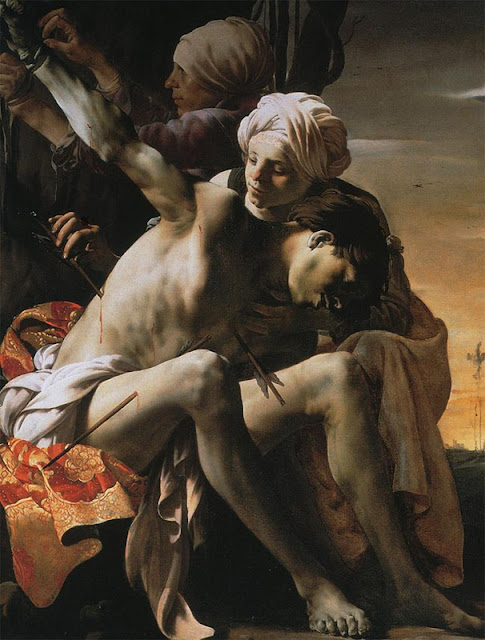 
The tending of Saint Sebastian by Irene was a popular theme in seventeenth-century art, indicative of a contemporary drive to project Catholicism as a caring faith.

Saint Sebastian was nursed by the pious Irene, who, upon discovering him still alive, tenderly removed the arrows that pierced his body. 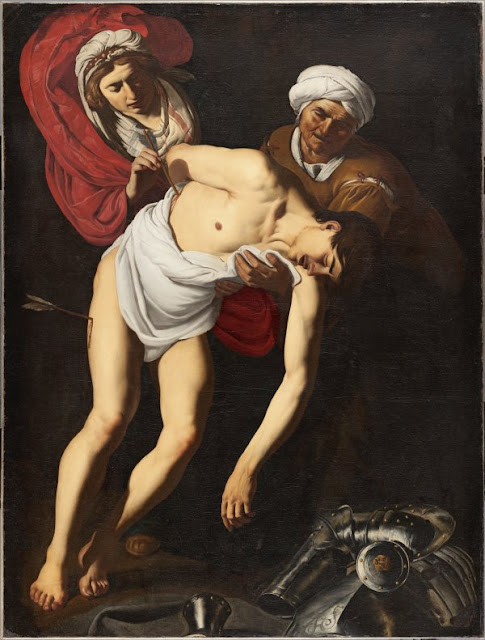 The earliest reference to the artist is in the 1611 records of the Utrecht Guild of St. Luke as a pupil of Paulus Moreelse. Sometime between 1612 and 1615 he travelled to Rome. There, he received the commission to paint the altarpiece of the Entombment for the chapel of the Pietà in San Pietro in Montorio around 1617. Baburen was one of the earliest artists to belong to the group of Dutch-speaking artists active in Rome in the seventeenth-century known as the "Bentvueghels" ("Birds of a Feather").

In late 1620 Baburen returned to Utrecht, where he began painting genre scenes. Until his death in 1624 the painter helped establish the stylistic and thematic innovations now known as the Utrecht School of Caravaggisti. More on Dirck van Baburen

Having survived an initial attempt on his life by Roman archers, Saint Sebastian became closely associated with arrows, which reflected his worldly career as a professional soldier, his religious role as a militant defender of the new faith, and eventually his intercessory action as a martyr capable of healing the plague. More on this painting 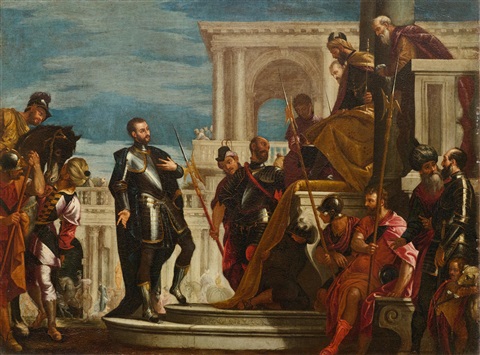 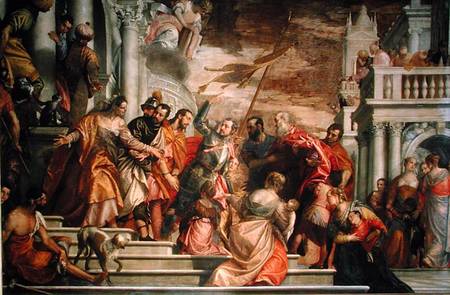 Sebastian later stood by a staircase where the emperor was to pass and harangued Diocletian for his cruelties against Christians. This freedom of speech, and from a person whom he supposed to have been dead, greatly astonished the emperor; but, recovering from his surprise, he gave orders for his being seized and beaten to death with cudgels, and his body thrown into the common sewer, the Cloaca Maxima. The Emperor hoped that he would never be found there by the Christians, who would consider him a new martyr. 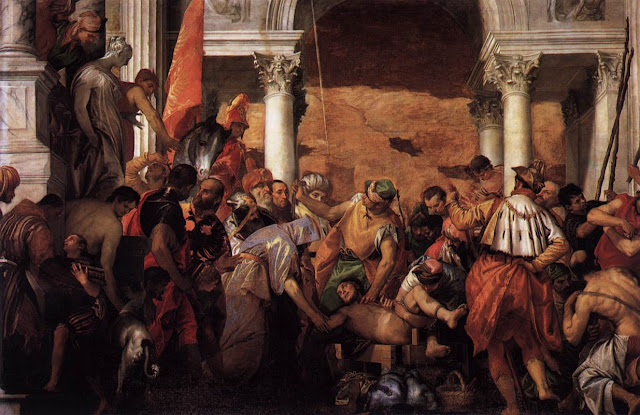 This scene of the martyrdom of St Sebastian is unusual in that the saint is not shown pierced with arrows but in an earlier moment of his martyrdom, when he is stripped and flogged.

Paolo Caliari, known as Paolo Veronese (1528 – 19 April 1588) was an Italian Renaissance painter based in Venice, most famous for large history paintings of both religious and mythological subjects, such as The Wedding at Cana and The Feast in the House of Levi. With Titian, who was at least a generation older, and Tintoretto, ten years older, he was one of the "great trio that dominated Venetian painting of the cinquecento" or 16th-century late Renaissance. Veronese is known as a supreme colorist, and after an early period with Mannerist influence turned to a more naturalist style influenced by Titian.

His most famous works are elaborate narrative cycles, executed in a dramatic and colorful style, full of majestic architectural settings and glittering pageantry. His large paintings of biblical feasts, crowded with figures, painted for the refectories of monasteries in Venice and Verona are especially famous, and he was also the leading Venetian painter of ceilings. Most of these works remain in situ, or at least in Venice, and his representation in most museums is mainly composed of smaller works such as portraits that do not always show him at his best or most typical.

He has always been appreciated for "the chromatic brilliance of his palette, the splendor and sensibility of his brushwork, the aristocratic elegance of his figures, and the magnificence of his spectacle", but his work has been felt "not to permit expression of the profound, the human, or the sublime", and of the "great trio" he has often been the least appreciated by modern criticism. Nonetheless, "many of the greatest artists ... may be counted among his admirers, including Rubens, Watteau, Tiepolo, Delacroix and Renoir". More on Paolo Caliari

A pious lady, called Lucina, admonished by the martyr in a dream, got his body privately removed, and buried it in the catacombs at the entrance of the cemetery of Calixtus, where now stands the Basilica of St. Sebastian. More on St.Sebastian 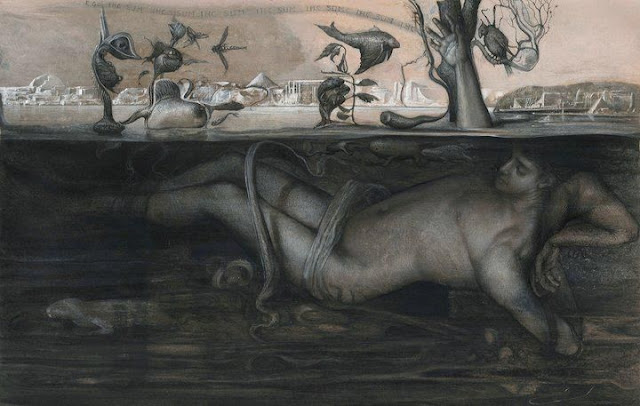 Agostino Arrivaben
The Dream of Lucina

Agostino Arrivaben was born in 1967 in Rivolta d’Adda, Cremona. He graduated from Fine Arts academy in Milano, but his real formation comes with the direct observation of the ancient masters and their works he studied in many museums of Europe and the world; looking for a way to merge the poetics of the past and the search for Beauty with the contradictory reality of present time.

His artistic research developed under the guide of ancient masters, particularly Leonardo, Durer, Van Eyck and all the early Flemish, and Rembrandt.

In his personal anti-modern journey Agostino discovers traditional painting techniques, coming to the artisanal preparation of colors in a continuous investigation of the ancient mediums used in paintings of the past centuries.

His works are characterized by a strong visionary charge with a preference for symbolic a language and are made of precious materials no longer used nowadays, all handcrafted by the artist himself. More on Agostino Arrivaben 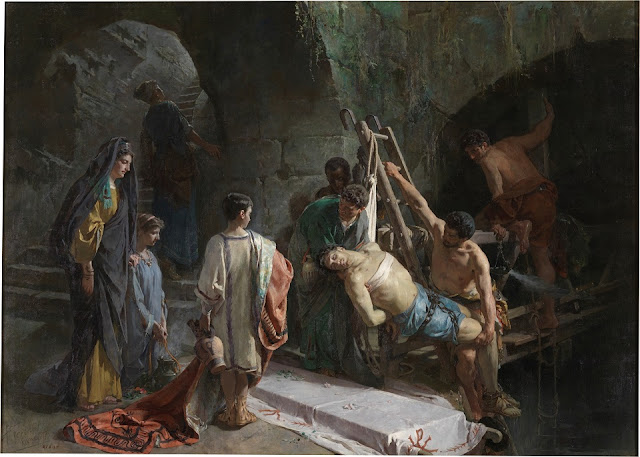 Alejandro Ferrant y Fischermans (9 September 1843 – 20 January 1917) was a Spanish painter.
He was born in Madrid, and studied with his uncle, Luis Ferrant Llausàs, and at the Real Academia de Bellas Artes de San Fernando. He also received a fellowship to study in Rome, where he was among the first students to attend the "Academia Española de Bellas Artes en Roma", together with Francisco Pradilla, Casto Plasencia, Manuel Castellano, Eduardo Sánchez Solá and Jaime Morera. He was director of the Museum of Modern Art in Madrid, which was merged into the Museo del Prado in 1971. His son Ángel Ferrant was a leading sculptor of the Spanish vanguard. More on Alejandro Ferrant