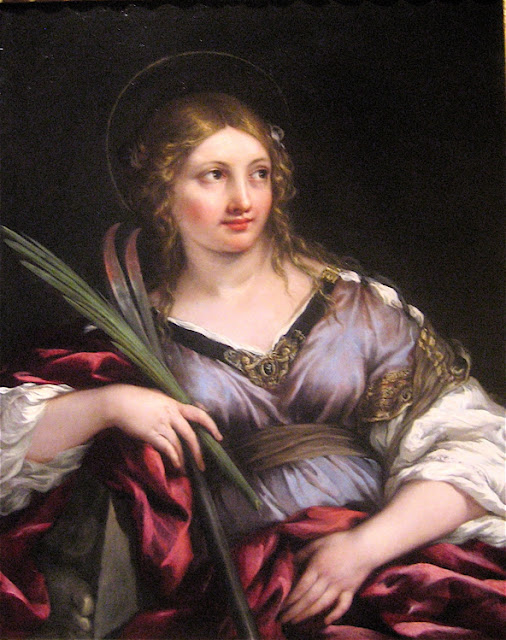 Martina of Rome was a Roman martyr under emperor Alexander Severus. A patron saint of Rome, she was martyred in 226.

The daughter of an ex-consul and orphaned at an early age, she was described as a noble and beautiful virgin. She so openly testified to her Christian faith that she could not escape the persecutions under Alexander Severus. Arrested and commanded to return to idolatry, she refused, whereupon she was subjected to various tortures. These tortures according to her vita include being scourged and scaled, was condemned to be devoured by wild beasts in the amphitheater but was miraculously untouched by them. She was then thrown onto a burning pyre, from which she also escaped unhurt, and was finally beheaded. 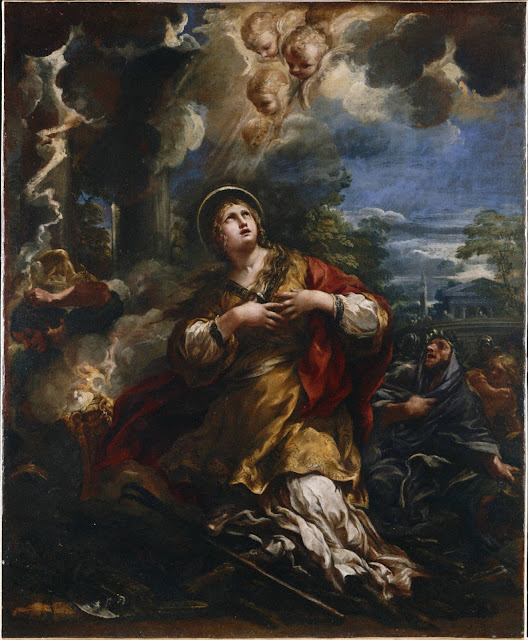 The painting combines allusions to events usually portrayed in narrative cycles. Martina refuses to sacrifice to pagan idols and kneels on the objects employed in attempts to torture her — the pyre and the iron rod used to tear her flesh. Also in the trophy-like pile are the fasces, symbol of the Roman state, and the sword eventually used to behead the saint. A tripod with flames awaits the sacrifice. Suddenly the heavens open, rays of light and cherubim appear, and a pagan idol, at the left, topples back­ward. The saint looks heaven­ward, toward the inspiring vision of paradise; she will go forward confidently to her martyrdom. More on this painting


Her hagiography asserts that some of her executioners also converted to Christianity and were themselves beheaded.


The relics of Martina were discovered on October 25, 1634 by the painter Pietro da Cortona, in a crypt of Santi Luca e Martina, situated near the Mamertine Prison and dedicated to the saint. Pope Urban VIII, who occupied the Holy See at that time, had the church repaired and, it would seem, composed the hymns which are sung at her office. More on Martina of Rome 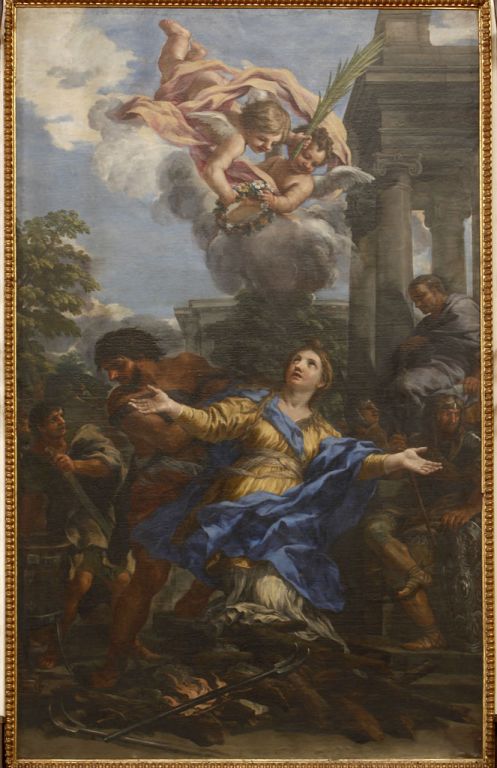 Saint Martina, a victim of the persecutions ordered by the emperor Alexander Severus against the Christians; in the picture he sits on the far right. In the foreground, martyrdom is pushed by one of the executioners in the fire, which she survives by a miracle. On the left, a man holds the sword with which the young woman will be decapitated. The painting, made by Pietro da Cortona for the Bandinelli chapel in 1655, has, in the upper part, two putti who stretch the palm and the crown of martyrdom to the Saint. More on this painting

Pietro da Cortona (1 November 1596/7 – 16 May 1669) was born Pietro Berrettini, but is primarily known by the name of his native town of Cortona in Tuscany. He was the leading Italian Baroque painter of his time and, along with his contemporaries and rivals Gian Lorenzo Bernini and Francesco Borromini, was one of the key figures in the emergence of Roman Baroque architecture. He was also an important designer of interior decorations.


Cortona worked mainly in Rome and Florence. He is best known for his frescoed ceilings such as the vault of the salone or main salon of the Palazzo Barberini in Rome and carried out extensive painting and decorative schemes for the Medici family in Florence and for the Oratorian fathers at the church of Santa Maria in Vallicella in Rome. He also painted numerous canvases. Only a limited number of his architectural projects were built but nonetheless they are as distinctive and as inventive as those of his rivals. More on Pietro da Cortona