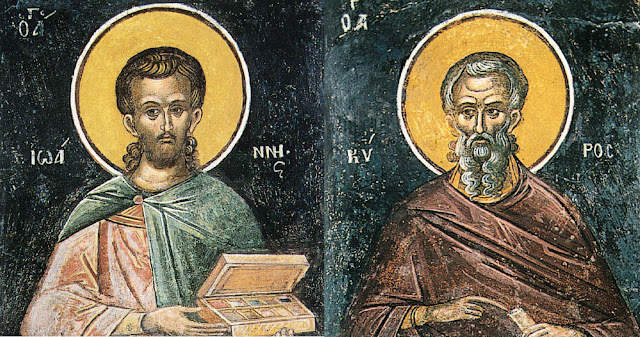 Saints Cyrus and John (d. ca. 304 AD, or 311) are venerated as martyrs. They are especially venerated by the Coptic Church and surnamed Wonderworking Unmercenaries because they are supposed to have healed the sick free of charge.

Cyrus and John were both Alexandrians; this, however, is contradicted by other documents in which it is said that Cyrus was a native of Alexandria and John of Edessa.

Cyrus practised the art of medicine, and had a workshop. He ministered to the sick gratis and at the same time laboured with all the ardour of an apostle of the Faith, and won many from pagan superstition. This took place under the Emperor Diocletian. Denounced to the prefect of the city he fled to Arabia. There, assumed the monastic habit, he abandoned medicine and began a life of asceticism.

John belonged to the army, in which he held a high rank; the "Synaxarium" cited above adds that he was one of the familiars of the emperor. Hearing of the virtues and wonders of Cyrus, he went to Jerusalem in fulfillment of a vow, and thence passed to Alexandria and then to Arabia where he became the companion of St. Cyrus in the ascetic life. 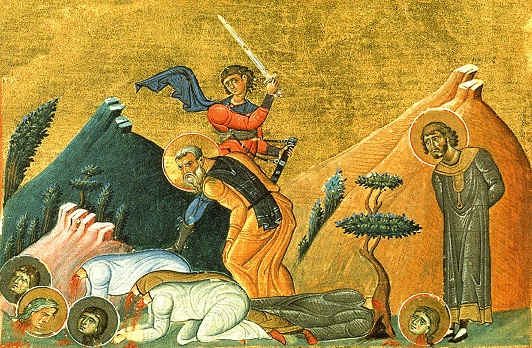 Saints Cyrus and John with Theoctista, Theodota, Theodossia, and their mother Athanasia
The Menologion of Basil II
Vatican Library

During the persecution of Diocletian three holy virgins, together with their mother Athanasia, were arrested at Canopus and brought to Alexandria. Cyrus and John, fearing lest these girls, on account of their youth, might, in the midst of torments, deny the Faith, resolved to go into the city to comfort them and encourage them in undergoing martyrdom. This fact becoming known they also were arrested and after dire torments they were all beheaded on the 31st of January. More on Saints Cyrus and John 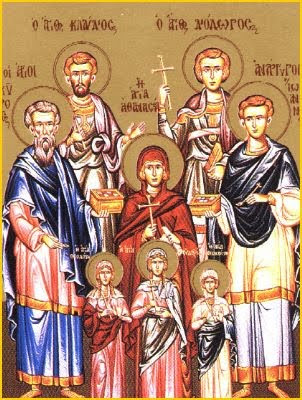 Cyrus and John, Unmercenaries and Miracle-workers; Martyrs Athanasia and her daughters Theoctista, Theodora and Eudoxia in Egypt

Please note that the content of this post primarily consists of articles available from Wikipedia or other free sources online.
at January 31, 2019