It should be noted that the actual vision of St. John de Matha was of Christ and two captives not an angel as has been reflected at times erroneously in some works of art. See the Mosaic St. John de Matha had installed in Rome at St. Thomas in Formis for an account of the vision. More on this painting

Born in Avilés in Asturias. His family moved to Madrid in 1623, where he trained in Madrid during the late 1620s as an apprentice to Pedro de las Cuevas and Bartolomé Román. He came to the notice of Velázquez for his work in the cloister of Doña María de Aragón and in the Church of Our Lady of the Rosary, La Joyosa. In 1658 Carreño was hired as an assistant on a royal commission to paint frescoes in the Alcázar of Madrid; later destroyed in a fire in 1734. In 1671. Upon the death of Sebastián de Herrera, he was appointed court painter to the queen and began to paint primarily portraits. He refused to be knighted in the order of Santiago, saying Painting needs no honors.

Noble by descent, he had an understanding of the workings and psychology of the royal court as no painter before him, making his portraits of the Spanish royal family in an unprecedented documentary fashion. More on Juan Carreño de Miranda

Saint John of Matha (1160–1213) was a Christian saint of the 12th century and founder of the Order of the Most Holy Trinity, dedicated to ransoming captive Christians.

Between the eighth and the fifteenth centuries medieval Europe was in a state of intermittent warfare between the Christian kingdoms of southern Europe and the Muslim polities of North Africa, Southern France, Sicily and portions of Spain. According to James W. Brodman, the threat of capture or kidnapping, whether by pirates or coastal raiders, or during one of the region's intermittent wars, was a continual concern for residents of Catalonia, Languedoc, and the other coastal provinces of medieval Christian Europe.

The threat of capture, whether by pirates or coastal raiders, or during one of the region's intermittent wars, was not a new but rather a continuing threat to the residents of Catalonia, Languedoc, and the other coastal provinces of medieval Christian Europe.


The redemption of captives is listed among the corporal works of mercy. The period of the Crusades, when so many Christians were in danger of falling into the hands of Muslims, witnessed the rise of religious orders vowed exclusively to this pious work.

John of Matha studied theology at the University of Paris and was ordained a priest at the age of 32 in December 1192. On January 28, 1193, John celebrated his first Mass. During that Mass, he was struck with a vision of Christ holding by the hand two chained captives, one a Moor, the other a Christian. The Christian captive carried a staff with a red and blue cross. After the Mass, John decided to devote himself to the task of ransoming Christian captives from the Moors. To prepare himself for this work, he went to visit a hermit, St. Felix of Valois, to be instructed in the practice of perfection. When he revealed his plan, St. Felix was convinced that the design was from God, and offered to help him. Together they founded the Order of the Holy Trinity to ransom the captives. Soon, countless vocations came to the Order. The Trinitarians traveled with the Crusaders, teaching the soldiers, taking care of the sick, and dealing with the redemption of the captives. 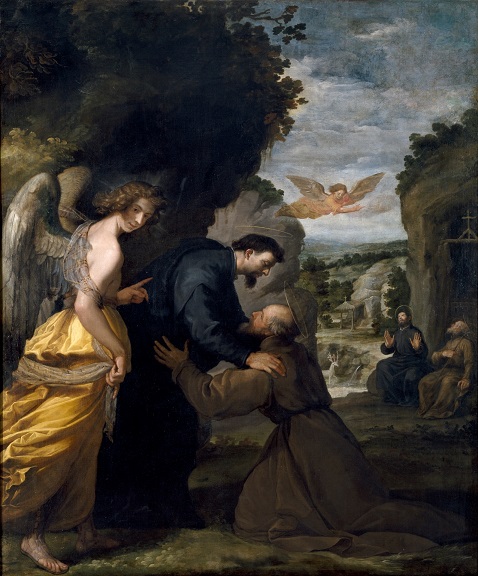 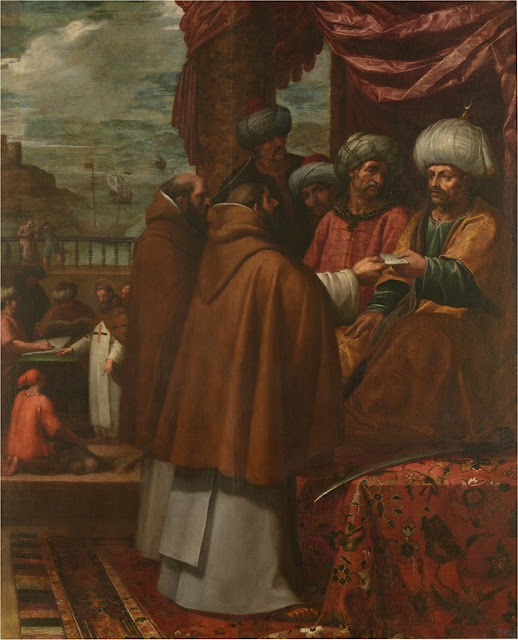 Vincenzo Carducci, (1576–1638)
Saint John of Mata delivers the Pope's letters to the king of Morocco in the first redemption
Oil on canvas
Prado Museum

Christian slaves were first rescued by the Order in 1201. In 1202 and 1210 John travelled to Tunisia himself and brought back countless Christian slaves. 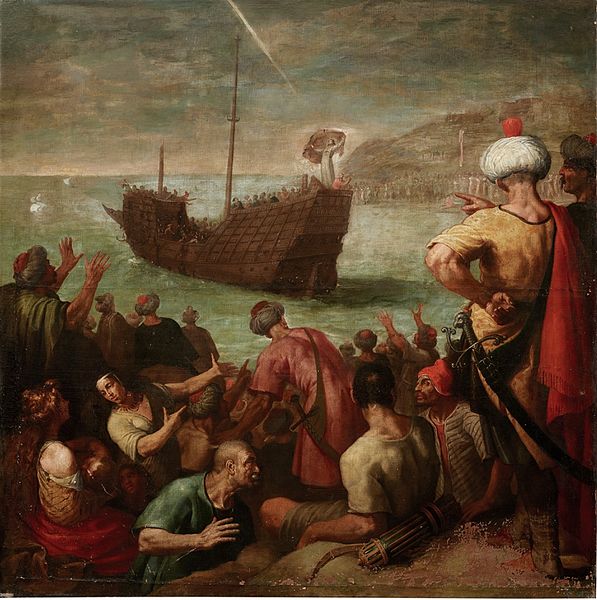 Vincenzio Carduccio (1576/78–1638) was an Italian painter, born in Florence, and was trained as a painter by his brother Bartolomeo Carduccio, whom he followed to Madrid as a boy.

He Initially painted some works at Valladolid and helped his brother in painting at the Escorial for Philip II of Spain. He returned to the court of Philip III in Madrid in 1606 and helped decorate the recently rebuilt Palacio del Pardo. While at work his brother died, and Vicente took his place. He painted there a history of Achilles. When finished, he was employed for four years by the monks of the Chartreuse of el Paular to decorate their monastery with 54 canvases of historical figures the great cloister.


He worked a great deal for the subsequent monarch, Philip IV, and his best pictures are those he executed for him as decorations in the Prado. Examples of his work are preserved at Toledo, Segovia, and several other Spanish cities. For many years he labored in Madrid as a teacher of his art, and among his pupils were Giovanni Ricci, Pedro Obregon, Vela, Francisco Collantes, and other distinguished representatives of the Spanish school during the 17th century. More on Vincenzio Carduccio

Trinitarian tradition says he met St. Francis of Assisi and introduced Francis to the Frangipani family, one of the benefactors of the Franciscan order. St. John of Matha died on December 17, 1213, in Rome. More on Saint John of Matha

Please note that the content of this post primarily consists of articles available from Wikipedia or other free sources online.
at February 09, 2019