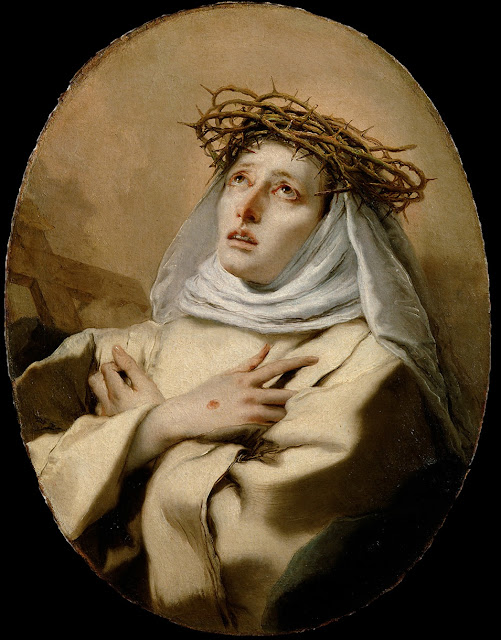 Giovanni Battista Tiepolo, 1696 - 1770. Born into a wealthy and noble family in Venice, Giambattista Tiepolo was recognized by contemporaries throughout Europe as the greatest painter of large-scale decorative frescoes in the 1700s. He was admired for having brought fresco painting to new heights of technical virtuosity, illumination, and dramatic effect. Tiepolo possessed an imagination characterized by one of his contemporaries as "all spirit and fire."

A gifted storyteller, Tiepolo painted walls and ceilings with large, expansive scenes of intoxicating enchantment. In breath-taking visions of mythology and religion, the gods and saints inhabit light-filled skies. His ability to assimilate his predecessor and compatriot Paolo Veronese's use of color was so profound that his contemporaries named him Veronese redivio (a new Veronese).


Tiepolo's commissions came from the old established families of Italy, religious orders, and the royal houses of Spain, Germany, Sweden, and Russia. His frescoes adorn palaces, churches, and villas, and his artistic legacy consists of some eight hundred paintings, 2,400 drawings, two sets of etchings, and acres of fresco. When Tiepolo died at the age of seventy-four, a Venetian diarist noted the "bitter loss" of "the most famous Venetian painter, truly the most renowned...well known in Europe and the most highly praised in his native land." More on Giovanni Battista Tiepolo

Saint Catherine de' Ricci, O.S.D. (Caterina de' Ricci) (23 April 1522 – 2 February 1590), was an Italian Dominican Tertiary sister. She is believed to have had miraculous visions and corporeal encounters with Jesus, both with the infant Jesus and with the adult Jesus. She is said to have spontaneously bled with the wounds of the crucified Christ. She is venerated for her mystic visions and is honored as a saint by the Catholic Church.

She was born Alessandra Lucrezia Romola de' Ricci in Florence to a patrician family. At age 6 or 7, her father enrolled her in a school run by a monastery of Benedictine nuns in the Monticelli quarter of the city. There she developed a lifelong devotion to the Passion of Christ. She then entered the Convent of St Vincent in Prato, Tuscany, a cloistered community of religious sisters who followed the strict regimen of life she desired. In May 1535 she received the religious habit, and the religious name of Catherine, after the Dominican tertiary, Catherine of Siena.

Her period of novitiate was a time of trial. She would experience ecstasies during her routine, which caused her to seem asleep during community prayer services, dropping plates and food, so much so that the community began to question her competence, if not her sanity. Eventually the other Sisters became aware of the spiritual basis for her behavior. By the age of 30 she had risen to the post of prioress.

As the prioress, De' Ricci developed into an effective and greatly admired administrator. She was an advisor on various topics to princes, bishops and cardinals. An expert on religion, management and administration, her advice was widely sought. She gave counsel both in person and through exchanging letters. It is reported that she was extremely effective and efficient in her work, managing her priorities very well. 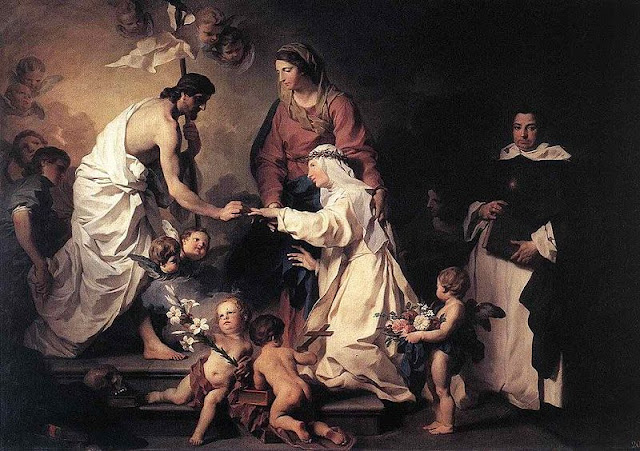 Pierre Subleyras
The Mystic Marriage of St. Catherine of Ricci, c. 1740-1745
Oil on canvas
Private collection
Pierre Subleyras (November 25, 1699 – May 28, 1749) was a French painter, active during the late-Baroque and early-Neoclassic period, mainly in Italy.

He left France in 1728, having carried off the French Academy's grand prix, which provided scholarship for study in Rome. In Rome, he painted for the Elector of Saxony, Frederick Christian, a "Christ's Visit to the House of Simon the Pharisee", this work procured his admission into the famed Roman artists guild, Accademia di San Luca.

Cardinal Valenti Gonzaga next obtained for him the order for Saint Basil & Emperor Valens (also known as the Mass of St. Basil.

He was a remarkably incisive portraitist. The pope himself commanded two great paintings, the "Marriage of St Catherine" and the "Ecstasy of St Camilla", which he placed in his own private apartments.

Subleyras shows greater individuality in his curious genre pictures, which he produced in considerable number. In his illustrations of La Fontaine and Boccaccio his true relation to the modern era comes out; and his drawings from nature are often admirable.

Exhausted by overwork, Subleyras tried a change to Naples, but returned to Rome at the end of a few months to die. More on Pierre Subleyras

It is claimed that De' Ricci's meditation on the Passion of Christ was so deep that she spontaneously bled, as if scourged. She also bore the Stigmata. During times of deep prayer, like Catherine of Siena, her patron saint, a coral ring representing her marriage to Christ, appeared on her finger. 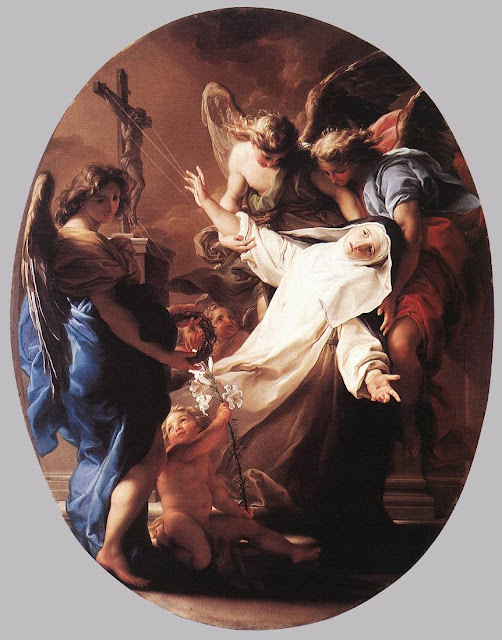 Pompeo Girolamo Batoni (25 January 1708 – 4 February 1787) Pompeo Batoni was born in Lucca. He moved to Rome in 1727, and apprenticed with Agostino Masucci, Sebastiano Conca and/or Francesco Imperiali. He displayed a solid technical knowledge in his portrait work and in his numerous allegorical and mythological pictures. Batoni won international fame largely thanks to his customers, mostly British of noble origin, whom he portrayed, often with famous Italian landscapes in the background.

In addition to art-loving nobility, Batoni's subjects included the kings and queens of Poland, Portugal and Prussia, the Holy Roman Emperors Joseph II and Leopold II (a fact which earned him noble dignity), as well the popes Benedict XIV, Clement XIII and Pius VI, Elector Karl Theodor of Bavaria and many more. He also received numerous orders for altarpieces for churches in Italy (Rome, Brescia, Lucca, Parma, etc.), as well as for mythological and allegorical subjects.

Batoni's style took inspiration and incorporated elements of classical antiquity, French Rococo, Bolognese classicism, and the work of artists such as Nicolas Poussin, Claude Lorrain and especially Raphael. As such Pompeo Batoni is considered a precursor of Neoclassicism. More on Pompeo Girolamo Batoni

One of the miracles that was documented for her canonization was her appearance many hundreds of miles away from where she was physically located. This involved appearing in a vision St Philip Neri, a resident of Rome, with whom she had maintained a long-term correspondence.

De' Ricci lived in the convent until her death in 1590 after a prolonged illness. More on Saint Catherine de' Ricci