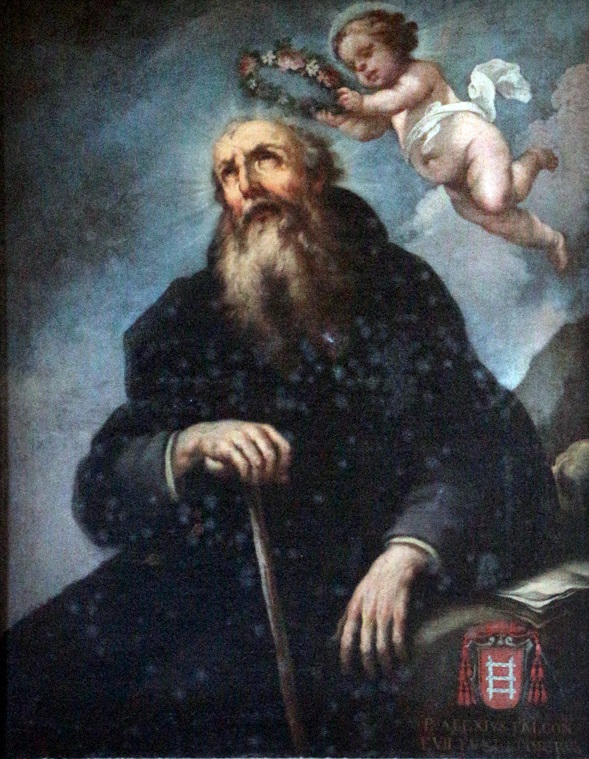 Antonio Pillori, Born c. 1687; died 1763, was a pupil of Sim. Pignoni and Lorenzo Rossi, and an imitator of Mehu. He executed frescoes in the monastery of Montesenario and the church of S. Trinità in Livorno.

Alexis Falconieri (1200 – 17 February 1310) was one of the seven founders of the Servite Order, who are celebrated together on the anniversary of his death.

He was the son of Bernardo Falconieri, a merchant prince of Florence, and one of the leaders of the Republic. His family belonged to the Guelph party, and opposed the Imperialists whenever they could consistently with their political principles. 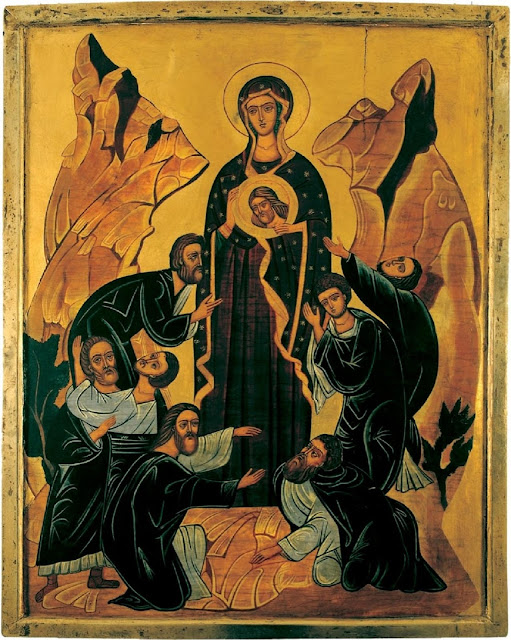 The SEVEN SAINTS FOUNDERS of the SERVITES of MARY

Falconieri grew up in the practice of the most profound humility. He became a wealthy noble in one of Italy’s most wealthy and cultured cities. He joined the Laudesi, a confraternity of the Blessed Virgin, and there met the six future companions of his life of sanctity. They were favoured with an apparition of the Mother of God, 15 August 1233. The seven soon afterwards founded the Order of the Servites. Its objectives are the sanctification of its members, preaching the Gospel, and the propagation of devotion to the Mother of God, with special reference to her sorrows.  Falconieri at once abandoned all, and retired to La Camarzia, a house on the outskirts of the town, and the following year to Monte Senario. 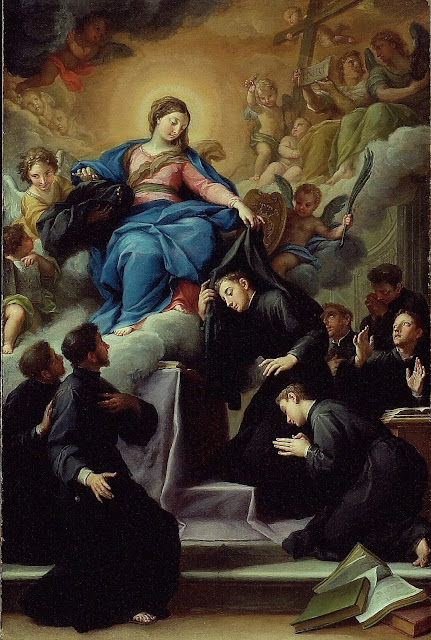 Born in Rome, he initially apprenticed with Andrea Procaccino, and then became a member of the studio of Carlo Maratta. He joined the Accademia di San Luca in 1724, and from 1736 to 1738, he was director or Principe. Masucci worked for the House of Savoy, and also obtained commissions from John V of Portugal.

Masucci also made the models for the three main mosaic panels in the Chapel of St. John the Baptist for King John V of Portugal. It was completed in 1750, although the mosaics in it were not finished until 1752. It was held to be the most expensive chapel in Europe up to that time.

For the Royal house of Savoy, he painted a series of historical canvases. Most of the works he completed, however, were in churches in Rome. He painted the Madonna with the Seven Founders of the Servite Order (c. 1728 found in the Art Institute of Chicago. (above)


His academicism and grand-manner painting span styles from Baroque to incipient Neoclassicism. More on Agostino Masucci

As they were praying in devotion to Mary's sorrows, she appeared to them and gave them the Black Scapular of her sorrows.

With humility, he traversed, as a mendicant, relying chiefly or exclusively on charitable donations to survive; in quest of alms for his brethren, in the streets of the city through which he had lately moved as a prominent citizen. So deep and sincere was his humility that, though he lived to the great age of hundred and ten years, he always refused to enter the priesthood, of which he deemed himself unworthy. 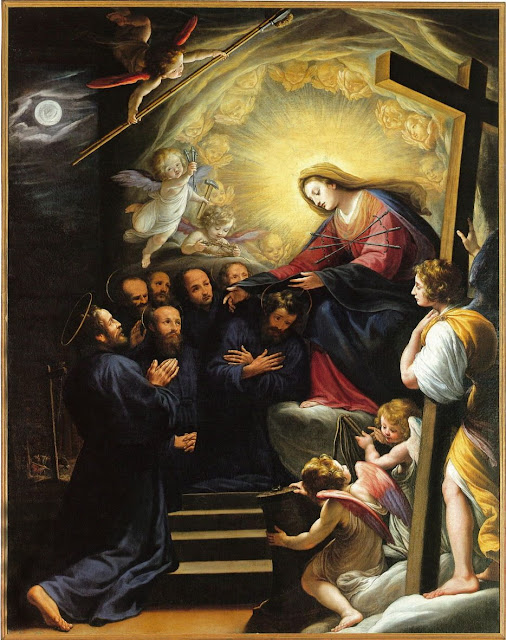 The Seven Holy Founders of the Servite Order of Mary receiving from the Blessed Virgin the black habit and the black scapular in honor of her Seven Sorrow.

"See what kind of clothes I want you to wear: they indicate in dark color the pains I felt today because of the death of my only Son."

Matteo Rosselli (10 August 1578 – 18 January 1650) was an Italian painter of the late Florentine Counter-Mannerism and early Baroque. He is best known however for his highly populated grand-manner historical paintings. On 26 February 1599, he was inducted to the Accademia del Disegno, and in 1605 traveled to Rome to work with Domenico Passignano for six months.

He completed some frescoes on Lives of Servite Monks (1614–1618) in the Palazzo Pitti and in the Cloister of the Basilica della Santissima Annunziata; a Madonna and child with St Francis altarpiece for the Church of Santa Maria Maggiore in Florence; and an Adoration of the Magi (1607) for the Church of Sant'Andrea in Montevarchi. He painted a Crucifixion (1613) now in the parish church at Scarperia. He painted a Last Supper (1614) now in Conservatorio di San Pier Martire.

Upon the French monarch's death, he was commissioned two commemorative paintings of events in the life of Henry IV: his visit to Nantes and Gaudabec (1610). He also completed an Assumption (1613) for the church of San Domenico in Pistoia. He painted a number of frescoes for the Casa Buonarroti based on events of Michelangelo's life.

The largest collection of Rosselli drawings is contained within the Louvre Museum, Paris, with many being preliminary sketches for other works. More on Matteo Rosselli

His duties were confined principally to the material needs of the various communities in which he lived. In 1252 the new church at Cafaggio, on the outskirts of Florence, was completed under his care, with the financial assistance of Chiarissimo Falconieri. Saint Giuliana Falconieri, his niece, was trained in sanctity under his personal direction.

The influence exerted on his countrymen by Falconieri and his companions may be gathered from the fact that in a few years ten thousand persons had enrolled themselves under the banner of the Blessed Virgin in the Servite Order.

His body rests near the church of the Santissima Annunziata in Florence. Clement XI declared Falconieri worthy of the veneration of the faithful, 1 December 1717, and accorded the same honour to his six companions, 3 July 1725.

Pope Leo XIII canonized them all on 15 January 1888. More on Alexis Falconieri