02 Works, RELIGIOUS ART - Today, January 16, is the Veneration of the Chains of Apostle Peters' Day, With Footnotes 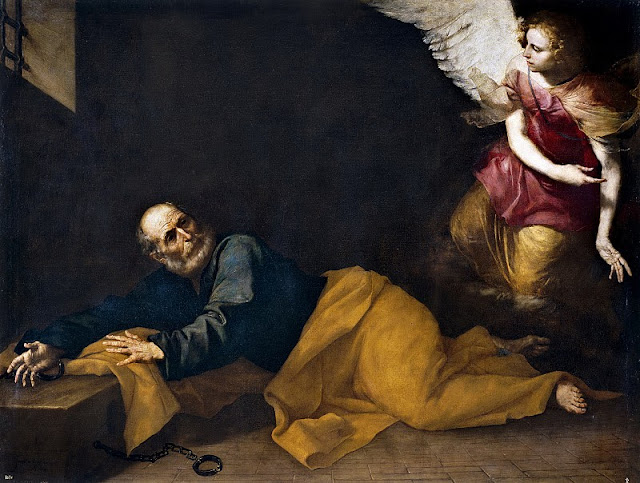 Saint Peter was arrested on the orders of Herod Agrippa, the Apostle Peter was thrown into prison for preaching about Christ.

His surveillance measures were so severe that, apart from the guards outside the prison gate, two soldiers were constantly next to him. The night before his trial and his conviction, while Christians were praying all night long, an angel of the Lord appeared, the Apostle’s chains miraculously fell off, the gates of the prison opened, and the imprisoned Apostle was released.

The faithful took this chain and kept it as a sacred relic and, thanks to the Holy Spirit, they became a source of healing and various miracles. For this reason, this day was established by the Church as the day of commemoration of the sufferings of Saint Peter and the day of veneration of the Precious Chain. In that way, the faithful honor the Apostle and receive his blessing thanks to their steadfast faith and forbearance.

On January 16, the chains of Saint Peter are brought out for public veneration.  More on chains of St. Peter

José de Ribera (January 12, 1591 – September 2, 1652) was a Spanish Tenebrist painter and printmaker, better known as Jusepe de Ribera. He also was called Lo Spagnoletto ("the Little Spaniard") by his contemporaries and early writers. Ribera was a leading painter of the Spanish school, although his mature work was all done in Italy.

Ribera was born at Xàtiva, Spain. He was baptized on February 17, 1591. He is said to have apprenticed with the Spanish painter Francisco Ribalta in Valencia. Longing to study art in Italy, he made his way to Rome in 1611. Roman artists gave him the nickname "Lo Spagnoletto".

Very little documentation survives from his early years. Ribera was living in Rome no later than 1612, and is documented as having joined the Academy of Saint Luke by 1613. He lived for a time in the Via Margutta, and almost certainly associated with other Caravaggisti who flocked to Rome at that time. In 1616, Ribera moved to Naples. In November, 1616, Ribera married Caterina Azzolino, the daughter of a Sicilian-born Neapolitan painter, Giovanni Bernardino Azzolino, whose connections in the Neapolitan art world helped to establish Ribera early on as a major figure.

Although Ribera never returned to Spain, many of his paintings were taken back by returning members of the Spanish governing class. From 1644, Ribera suffered serious ill-health, although his workshop continued to produce works under his direction. In 1647–1648, during the Masaniello rising against Spanish rule, he felt forced for some months to take his family with him into refuge in the palace of the Viceroy. In 1651 he sold the large house he had owned for many years, and when he died on September 2, 1652, he was in serious financial difficulties. More on José de Ribera 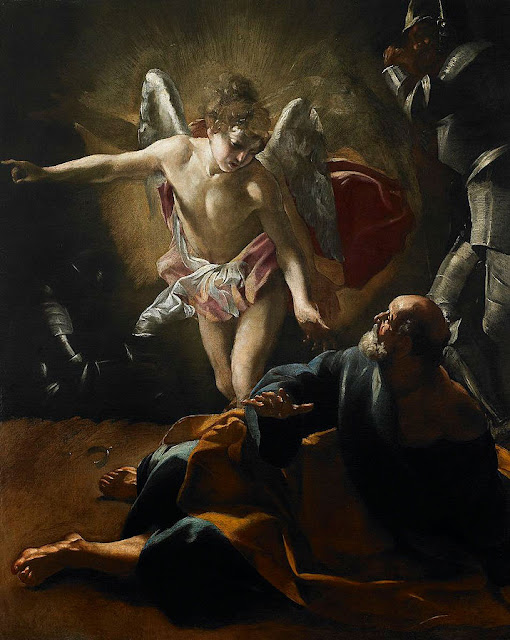 An unfinished painting depicting the Biblical events of Acts 12:6-7, where Peter is freed from prison by an angel.

Giovanni Lanfranco, also called Giovanni di Steffano or Il Cavaliere Giovanni Lanfranchi (born Jan. 26, 1582, Parma [Italy]—died Nov. 30, 1647, Rome) Italian painter, an important follower of the Bolognese school. He was a pupil of Agostino Carracci in Parma (1600–02) and later studied with Annibale Carracci in Rome. A decisive influence on his work, however, was not just the Baroque classicism of the Carracci brothers but the dynamic illusionism of the dome paintings in Parma by Correggio. Lanfranco translated Correggio’s 16th-century style into a Roman Baroque idiom. Soon after his arrival in Rome (1612), he painted the ceiling frescoes Joseph Explaining the Dreams of His Fellow Prisoners and Joseph and Potiphar’s Wife (both 1615) in the Palazzo Mattei. The frescoes combine techniques and styles learned from Annibale Carracci and from Lanfranco’s own study of Correggio and Caravaggio. Lanfranco’s painting in the dome of San Andrea della Valle in Rome (1621–25) derives directly from Correggio in its virtuoso use of vigorously posed figures floating in the clouds over the spectator’s head. Lanfranco worked in Naples from 1633/34 to 1646, his best known work there being the dome of the chapel of San Gennaro in the cathedral (1641–46). He was a bitter rival of Domenichino, both in Rome and later in Naples. More on Giovanni Lanfranco