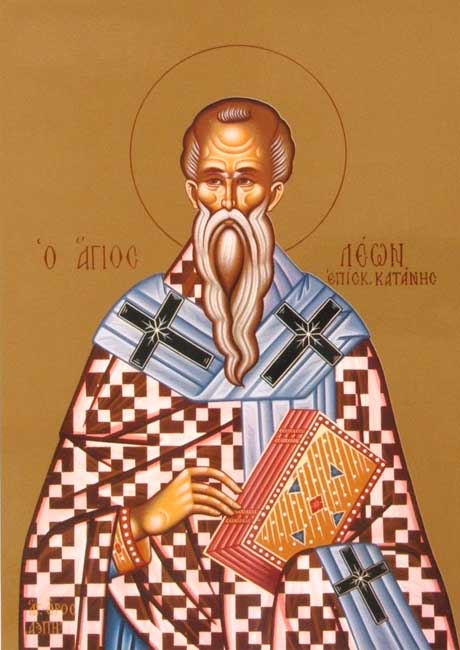 Saint Leo of Catania, nicknamed the Thaumaturgus, also known as St Leo the Wonderworker in Sicily (May 703 or 709 – 20 February 789) lived at the time of the first persecutions of the holy icons. He was born in Ravenna to a noble family, and became bishop of his native city. Soon his reputation spread, and he was elected Bishop of Catania in Sicily. As is so often true even today, the city, though nominally Christian, was plagued by superstition and paganism. The holy bishop set about to turn the people away from error: by his prayers he caused a pagan temple to collapse and built a church on its site, dedicated to the Forty Maryrs of Sebaste. 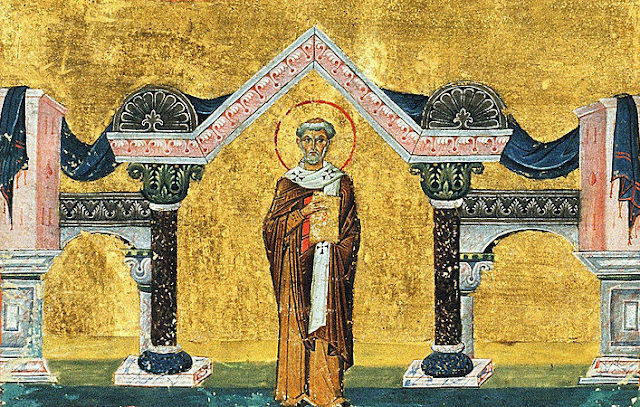 At that time the entire island was under the oppressive rule of a magus named Heliodorus, who used all his magical skills to oppress the people and advance himself. Though he had been taken captive by Imperial order, and condemned to death, he was always able to escape his captors by his occult skills. Saint Leo, who sought the conversion of everyone, did his best to turn the magus to Christ, but to no effect. 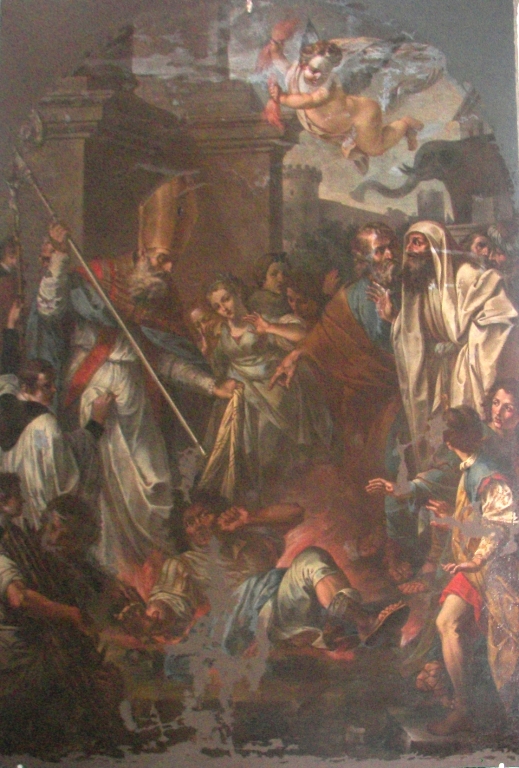 Very little information on the first years of his life His first news places him in Rome at the workshop of Mariano Rossi , also born in Sciacca and operating for years in that city.

He remained in Rome for a long period, during which he married a member of the small Sicilian nobility, from whom he had a daughter.

He then left his wife and daughter to return to Sicily , where he settled in Catania, the city where he spent the rest of his life and in whose province some of his works are still found, especially in churches of Catania, Acireale and Santa Maria di Licodia.

He was the teacher of Giuseppe Gandolfo and Giuseppe Rapisardi . And again by Luigi Montalto and Sebastiano Lo Monaco. More on Matteo Desiderato

One day Heliodorus entered the church during the Divine Liturgy, mocking the Mysteries of Christ. The Saint came out of the sanctuary and, casting his omophorion over the mocker, instantly deprived him of his demonic powers. The Prefect of Sicily ordered the magus to be burnt alive. Bishop Leo went to the stake with him, but emerged unmarked without even the smell of fire upon him, while Heliodorus was burnt to ashes.

Saint Leo's fierceness in defense of the Faith was matched by his love and compassion for the poor and defenseless, for whom he poured himself out unceasingly with prayers, alms and visitation. By his prayers he restored sight to the blind and healed the paralyzed. After his repose, his holy relics, which exuded a fragrant myrrh, were venerated in a church that he had founded in honor of Saint Lucia. More on St Leo 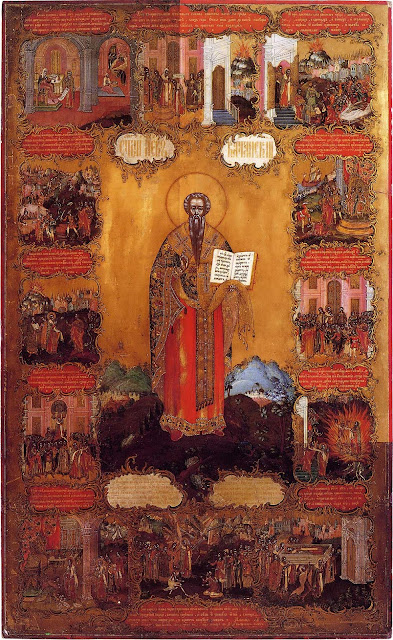 Leo Katansky, his life in 12 hallmarks.
The patron icon was made for the house chapel of the Yekaterinburg merchants

Please note that the content of this post primarily consists of articles available from Wikipedia or other free sources online.
at February 20, 2020