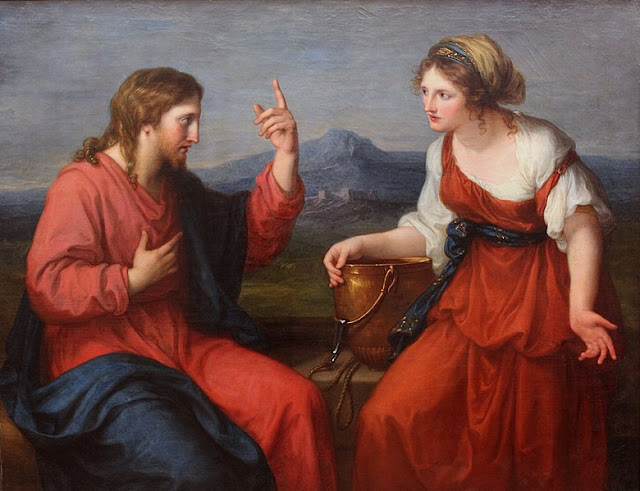 Maria Anna Angelika Kauffmann RA (30 October 1741 – 5 November 1807), usually known in English as Angelica Kauffman, was an Austrian Neoclassical painter who had a successful career in London and Rome. She was one of the two female founding members of the Royal Academy in London in 1768. More on Angelica Kauffman

St. Photini lived in first century Palestine. She was the Samaritan woman who Christ visited at the well asking her for water. It was she who accepted the “living water” offered her by Christ Himself; and told her townspeople that she had met the Christ. For this, she is sometimes recognized as the first to proclaim the Gospel of Christ. She converted her five sisters and her two sons. They all became tireless evangelists for Christ. 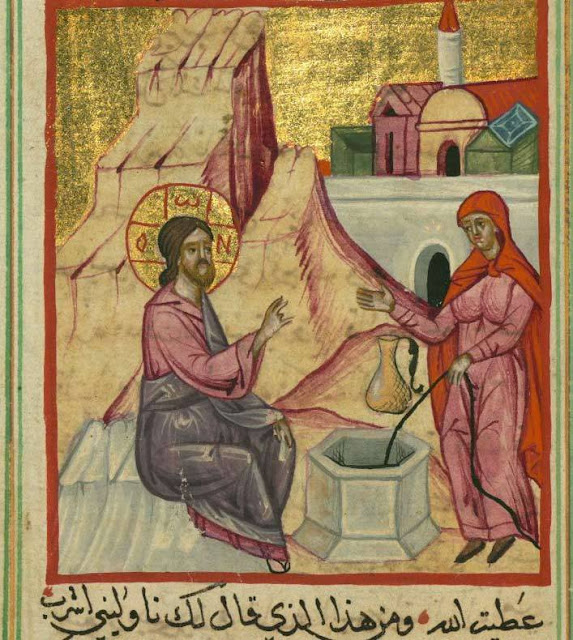 St-Photini (The Samaritan woman) and Christ at the well, from a Syrian manuscript
The apostles of Christ baptized her and gave her the name of Photini which means “the enlightened one.” After Sts. Peter and Paul were martyred, St. Photini and her family left Samaria, to travel to Carthage to proclaim the Gospel of Christ there.
Her eldest son, Victor, fought bravely in the Roman army against the barbarians, and was appointed military commander in the city of Attalia. 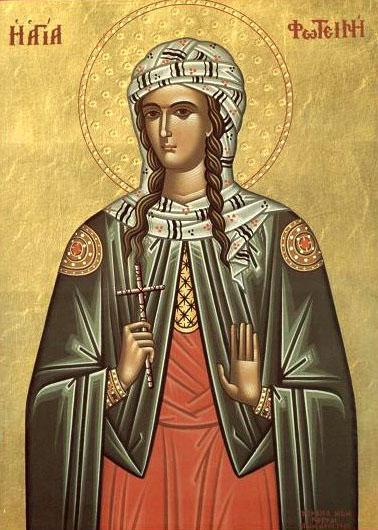 Reports of this reached Nero, and he commanded that the Christians be brought to him at Rome. The Lord Himself appeared to the confessors and said, “Fear not, for I am with you. Nero, and all who serve him, will be vanquished.” The Lord said to Victor, “From this day forward, your name will be Photinus, because through you, many will be enlightened and will believe in Me.”
St. Photini left Carthage in the company of several Christians and joined the confessors in Rome. 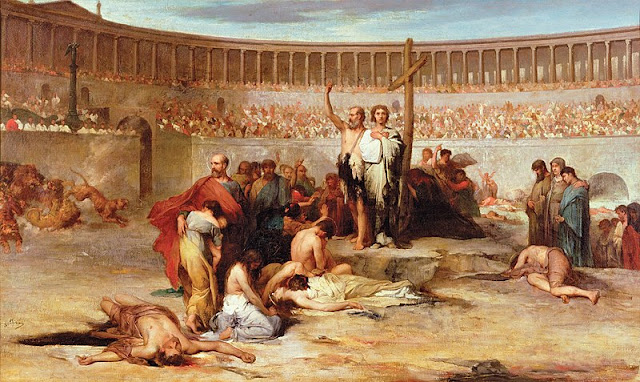 In 1860 , Thirion was admitted to the École des Beaux-Arts in Paris. He competed in the Prix ​​de Rome for the historic landscape in 1861 with Mercure and Argus . He first tried to win the Rome Prize for History painting in 1862, and again participated in the competition the following year, without success. Once again a candidate in 1864 , he obtained a second grand prize.

He began a prolific career in history painting and decorative painting. From the 1860s , he was part of the team of artists responsible for decorating the Marquise de la Païva's hotel on the avenue des Champs-Élysées in Paris. At the Salon of 1867 , he presented a large painting illustrating Perseus, and exhibited at the Salon of 1876 his most famous work, Joan of Arc listening to her voices .

He participated in the 1870s in the painted decorations of the Paris Opera , realizing the allegories of the months of July and August. In 1880 , he won the competition for the decoration of the ceiling of the staircase of honor of the town hall of the 12 th arrondissement of Paris and produced a large decorative composition evoking Les Industries du 12 edistrict, education and public assistance.


Around 1893 , he painted the figure of History for the Letters Lounge of the new Paris city hall . In 1898 , he received the commission for a decorative composition to adorn the Professors' gallery at the new Sorbonne 5 . In 1902 , he decorated the wedding hall of the new town hall in Tours with three monumental compositions evoking the activities of Tours and the historical personalities of the region. More on Eugène-Romain Thirion
At Rome, Emperor Nero ordered the saints to be brought before him, and he asked them whether they truly believed in Christ. All the confessors refused to renounce the Savior. The emperor then gave orders to smash the martyrs’ finger joints. During the torture, the confessors felt no pain, and their hands remained unharmed. 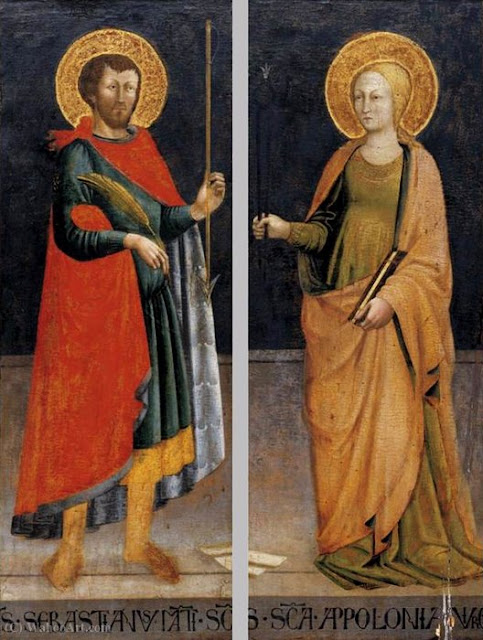 Neri di Bicci
STS SEBASTIAN AND APOLLONIA
Neri di Bicci (1419–1491) was an Italian painter active mainly in Florence. A prolific painter of mainly religious themes. He studied under his father, Bicci di Lorenzo, who in turn had studied under his father, Lorenzo di Bicci. All three were part of a lineage of great painters beginning with Neri's grandfather Lorenzo who was a pupil of Spinello Aretino.

Neri di Bicci's main works include a St. John Gualbert Enthroned, with Ten Saints for the church of Santa Trinita, an Annunciation (1464) in the Florentine Academy, two altarpieces in the Diocesan Museum of San Miniato, a Madonna with Child Enthroned in the Pinacoteca Nazionale of Siena, and a Coronation of the Virgin (1472) in the abbey church at San Pietro a Ruoti (Bucine).


The Ricordanze are a series of journals Neri kept from the years 1453–1475. They include the rates of remuneration for his work, his pupils, and lists of their works. They are the most extensive 15th century document we have relating to a 15th-century painter and are still preserved in the library of the Uffizi Gallery. More on Neri di Bicci

Nero ordered that Sts. Sebastian, Photinus and Joses be blinded and locked up in prison, and St. Photini and her five sisters were sent to the imperial court under the supervision of Nero’s daughter, Domnina. St. Photini converted both Domnina and her servants to Christ.

Domnina is not recorded in historical sources, and the story is likely a Christian myth dating to late antiquity, or to the medieval period. Nero's only recorded offspring was a daughter named Claudia Augusta, who died in infancy.
Three years passed, and Nero sent to the prison for one of his servants, who had been locked up. The messengers reported to him that Sts. Sebastian, Photinus and Joses, who had been blinded, had completely recovered, and that people were visiting them to hear their preaching. Indeed, the whole prison had been transformed into a bright and fragrant place where God was glorified. 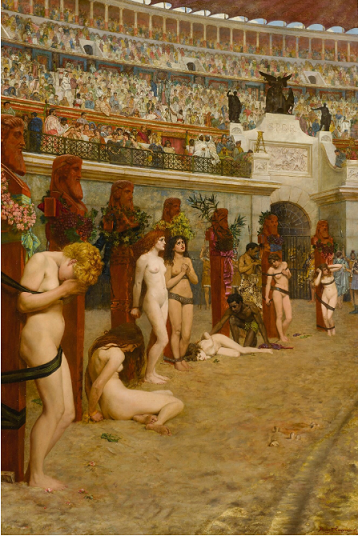 Herbert Gustave Schmalz (1856–1935) who named himself Herbert Gustave Carmichael in 1918, was an English painter. He is counted among the Pre-Raphaelites.

After his return to London he made a name for himself as a history painter, with a style influenced by the Pre-Raphaelites and orientalism. In 1884 he successfully exhibited his painting Too Late at the Royal Academy. After a voyage to Jerusalem in 1890 he made a series of paintings with New Testament topics, with Return from Calvary (1891) one of the best known.

After 1895 Schmalz increasingly painted portraits. In 1900 he held a big solo exhibition named "A Dream of Fair Women" in the Fine Art Society in Bond Street.

Nero then gave orders to crucify the saints, and to beat their naked bodies with straps. On the fourth day, the emperor sent servants to see whether the martyrs were still alive. Approaching the place of the tortures, the servants fell blind. An angel of the Lord freed the martyrs from their crosses and healed them.
In a rage, Nero gave orders to flay the skin from St. Photini and to throw her down a well. Sebastian, Photinus and Joses had their legs cut off, and they were thrown to dogs, and then had their skin flayed off. The sisters of St. Photini also suffered terrible torments. An expert in cruelty, the emperor readied the fiercest execution for St. Photis: they tied her by the feet to the tops of two bent-over trees. When the ropes were cut, the trees sprang upright and tore the martyr apart. The emperor ordered the others beheaded. St. Photini was removed from the well and locked up in prison for twenty days.
After this, Nero had St. Photini brought to him and asked if she would now relent and offer sacrifice to the idols. St. Photini spat in his face, and laughing at him, said, “O most impious of the blind, you profligate and stupid man! Do you think me so deluded that I would consent to renounce my Lord Christ and instead offer sacrifice to idols as blind as you?”
Hearing such words, Nero gave orders to throw St. Photini down a well, where she surrendered her soul to God in the year 66. More on St. Photini

Please note that the content of this post primarily consists of articles available from Wikipedia or other free sources online.
at February 26, 2020