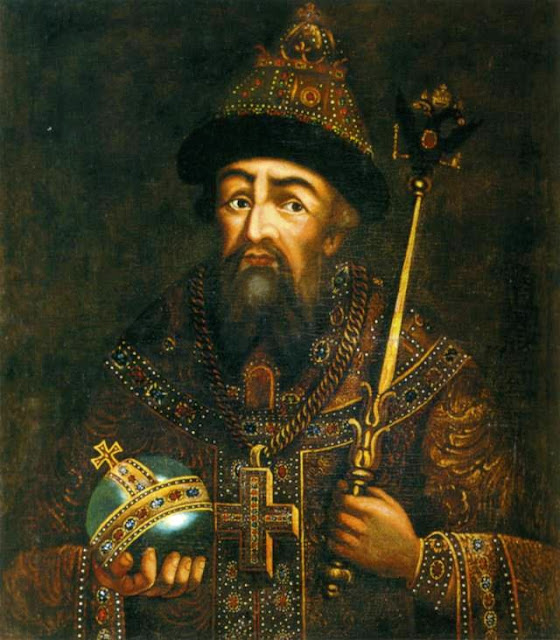 Foolishness for Christ refers to behavior such as giving up all one's worldly possessions upon joining a monastic order, or deliberately flouting society's conventions to serve a religious purpose—particularly of Christianity. Such individuals have historically been known as both "holy fools" and "blessed fools". The term "fool" connotes what is perceived as feeblemindedness, and "blessed" or "holy" refers to innocence in the eyes of God. More on Foolishness for Chris 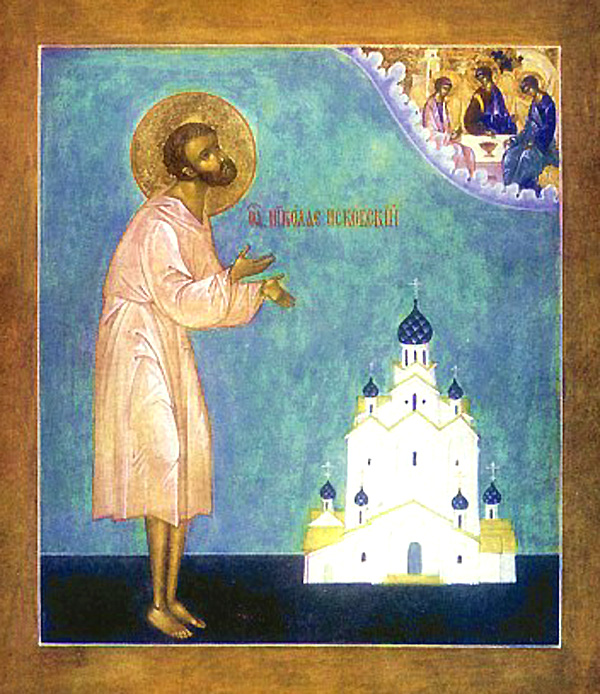 Nicholas of Pskov lived the life of a holy fool for more than three decades. Long before his death he acquired the grace of the Holy Spirit and was granted the gifts of wonderworking and of prophecy. The Pskov people of his time called him Mikula the Fool. Even during his lifetime they revered him as a saint, even calling him Mikula the saintly. 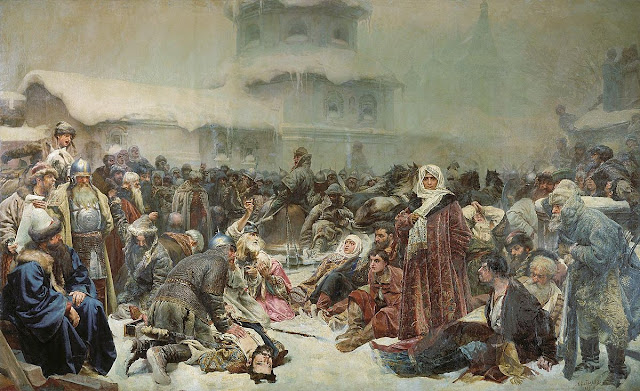 Lebedev came from a peasant family, studied at the Stroganov Moscow State Academy of Arts and Industry and the Moscow School of Painting, Sculpture and Architecture under Vasily Perov and Evgraf Sorokin. From 1890 he taught there.

In February 1570, after a devastating campaign against Novgorod, Tsar Ivan the Terrible moved against Pskov, suspecting the inhabitants of treason. 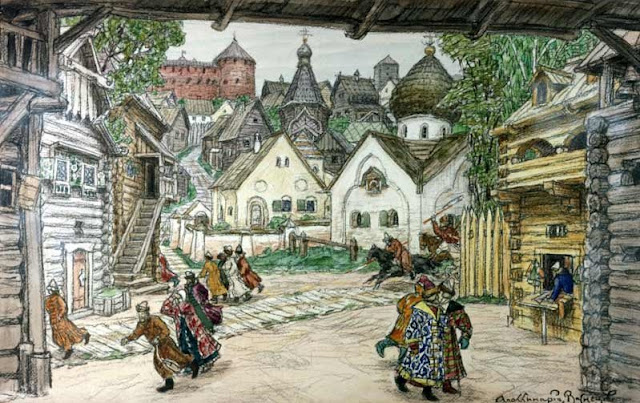 Apollinary Mikhaylovich Vasnetsov (August 6, 1856 in the village of Riabovo, Vyatka Governorate – January 23, 1933 in Moscow) was a Russian painter and graphic artist. He specialized in scenes from the medieval history of Moscow.


Vasnetsov did not receive a formal artistic education. He studied under his older brother, Viktor Vasnetsov, the famous Russian painter. From 1883, he and his brother lived and worked in Abramtsevo. In 1898–1899, he travelled across Europe. In addition to epic landscapes of Russian nature, Apollinary Vasnetsov created his own genre of historical landscape reconstruction on the basis of historical and archaeological data. His paintings present a visual picture of medieval Moscow. He was a member of the Association of Travelling Art Exhibitions from 1899, and an academician from 1900. He became one of the founders and supervisors of the Union of Russian Artists. More on Vasnetsov Apollinaris

All the inhabitants of Pskov came out upon the streets, and each family knelt at the gate of their house, bearing bread and salt to the meet the Tsar. 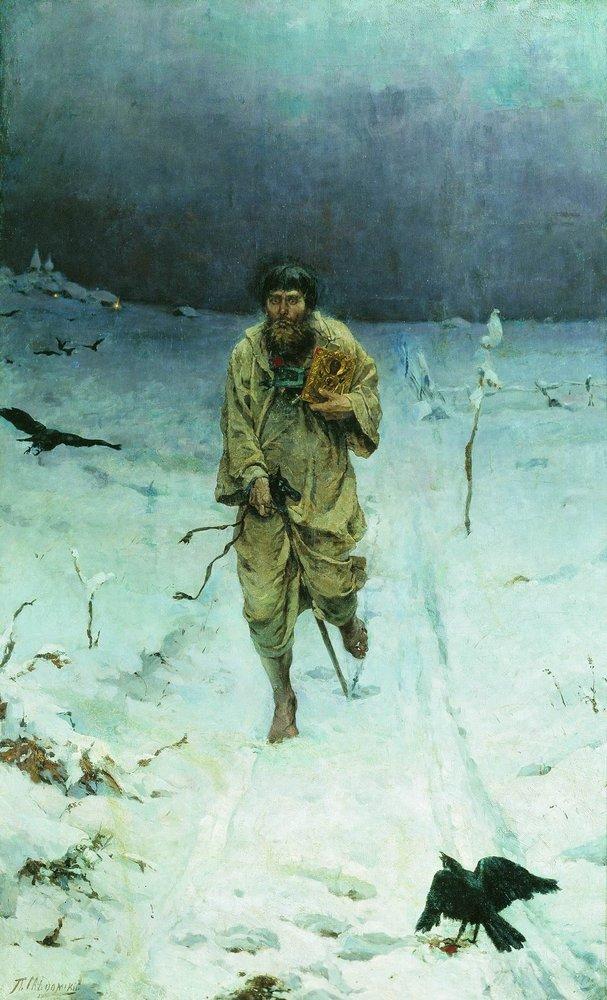 Pavel Aleksandrovich Svedomsky (7 June 1849, Saint-Petersburg—27 August 1904, Rome) was a Russian painter and the brother of another artist, Alexander Svedomsky.

In 1870 Pavel entered the Düsseldorf Academy of Arts, but studied there only a few months. The Svedomskys traveled together across Europe until settling in Rome in 1875. He died there in 1904 and is buried with his brother Alexander in the Protestant Cemetery.


Pavel Svedomsky painted in various genres, most notably in historic. The painting Medusa (1882) was bought by Pavel Tretyakov to be displayed in Tretyakov Gallery


Working in the St Volodymyr's Cathedral in Kiev, Svedosmky painted the northern and southern naves of the cathedral, creating six scenes from the life of Jesus. During his later years Svedomsky turned to Russian subjects.

The works of Svedomsky are scattered across various central and regional museums. More on Pavel Aleksandrovich Svedomsky


On one of the streets Blessed Nicholas ran toward the Tsar astride a stick as though riding a horse, and cried out: “Ivanushko, Ivanushko, eat our bread and salt, and not Christian blood.” 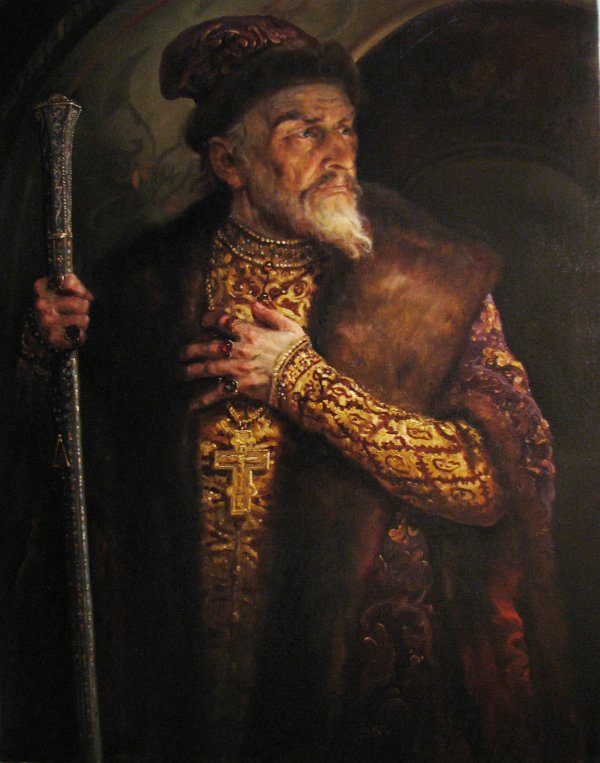 
He was born and raised in Moscow. He has dealt with painting since the beginning of 2000s and he currently works in a private studio. His main directions of creativity are portrait and historical paintings in realist attempt. Special theme in his works is Slavic mythology and history. More on Andrey Shishkin

The Tsar gave orders to capture the holy fool, but he disappeared.

Though he had forbidden his men to kill, Ivan still intended to sack the city. The Tsar attended a Molieben at the Trinity cathedral, and expressed his wish to receive the blessing of the holy fool Nicholas. The saint instructed the Tsar “by many terrible sayings,” to stop the killing and not to plunder the holy churches of God. But Ivan did not heed him and gave orders to remove the bell from the Trinity cathedral. Then, as the saint prophesied, the Tsar’s finest horse fell dead.

The blessed one invited the Tsar to visit his cell under the bell tower. When the Tsar arrived at the cell of the saint, he said, “Hush, come in and have a drink of water from us, there is no reason you should shun it.” Then the holy fool offered the Tsar a piece of raw meat. 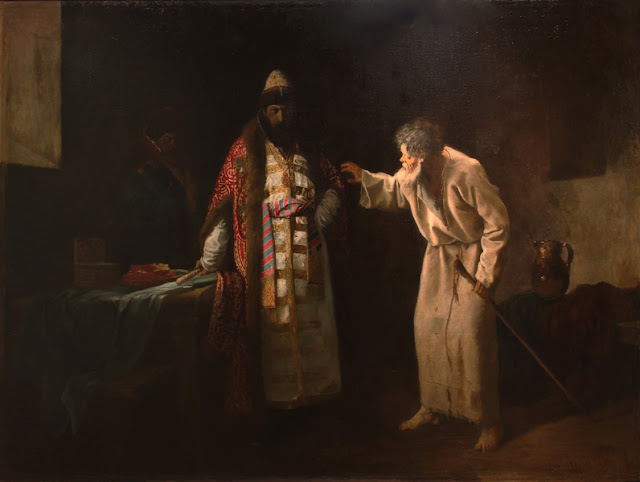 Pelevin Ivan to Vilna city in 1874. Tried himself as the historical painter there and painted the following paintings: "Ivan the Terrible in cell of Nikola yurodivy in Pskov" and "Boyard Troekurov is reading Ukase to Tsarevna Sofya about Her Confinement to Convent". But soon returned to depiction of the rural genre scenes as more peculiar to his talent.


In contrast with other Russian genre scene painters he pictures pleasant displays of peasants life. Sometimes his paintings are too idyllic.  He especially likes to depict children. More on Pelevin Ivan

“I am a Christian and do not eat meat during Lent”, said Ivan to him. “But you drink human blood,” the saint replied.

Frightened by the fulfillment of the saint’s prophecy and denounced for his wicked deeds, Ivan the Terrible ordered a stop to the looting and fled from the city.

Blessed Nicholas died on February 28, 1576 and was buried in the Trinity cathedral of the city he had saved. Such honors were granted only to the Pskov princes, and later on, to bishops. More on Nicholas of Pskov