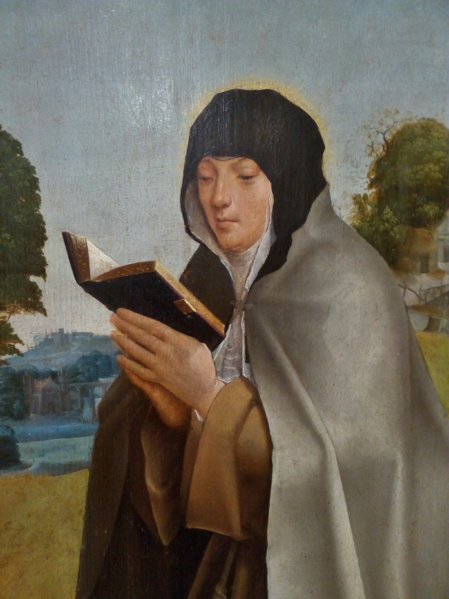 The Master of Lourinhã was a Portuguese painter of religious scenes active between 1510 and 1525.[1] He might have been of North Netherlandish origin.[1] He has been named after the church Santa Casa da Misericórdia in Lourinhã, Lisbon District, where two of his paintings are exhibited. More on The Master of Lourinhã

Saint Colette was born Nicolette Boellet, but called Colette, and lived during the great Church schism when there were two men claiming to be Pope: one in Rome and one in Avignon. She was orphaned at age 17, and promptly gave her inheritance to the poor of the region, , and with the help of her guardian, the Abbot of Corbie, moved into a small hermitage and joined the Third Order of Saint Francis. Colette subsequently became a hermitess for three years, living in a small hut adjacent to the church at Corbie, and at age 21, became an anchoress, having herself walled into a cell with only a small window which opened into the church. There she lived for some time in complete solitude, in prayer, fasting, and poverty. 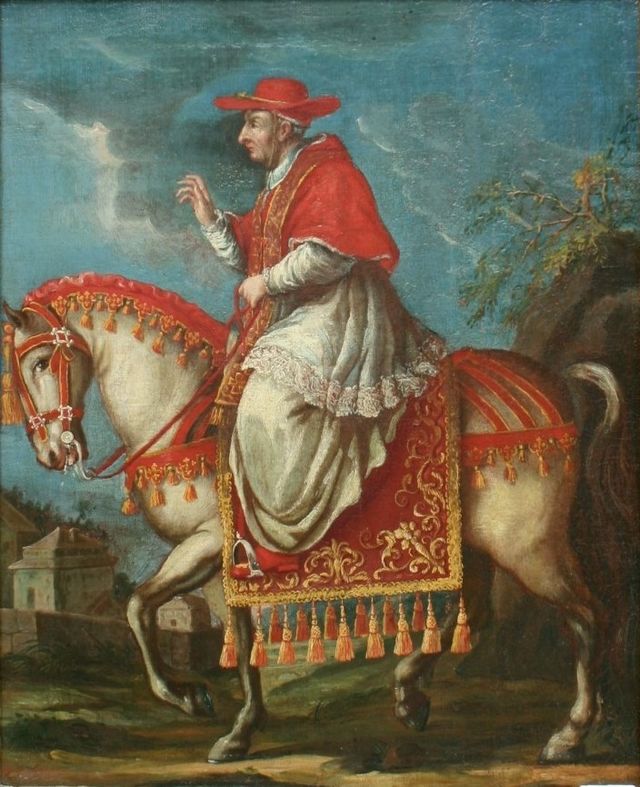 Born in Rome, he initially apprenticed with Andrea Procaccino, and then became a member of the studio of Carlo Maratta. He joined the Accademia di San Luca in 1724, and from 1736 to 1738, he was director or Principe. Masucci worked for the House of Savoy, and also obtained commissions from John V of Portugal.

Masucci also made the models for the three main mosaic panels in the Chapel of St. John the Baptist for King John V of Portugal. It was completed in 1750, although the mosaics in it were not finished until 1752. It was held to be the most expensive chapel in Europe up to that time.

For the Royal house of Savoy, he painted a series of historical canvases. Most of the works he completed, however, were in churches in Rome. He painted the Madonna with the Seven Founders of the Servite Order (c. 1728 found in the Art Institute of Chicago. (above)

His academicism and grand-manner painting span styles from Baroque to incipient Neoclassicism. More on Agostino Masucci

Pope Benedict  XIII entrusted her with the reform and she traveled all over France and Flanders founding and reforming convents.  In 1429, she met St. Joan of Arc. 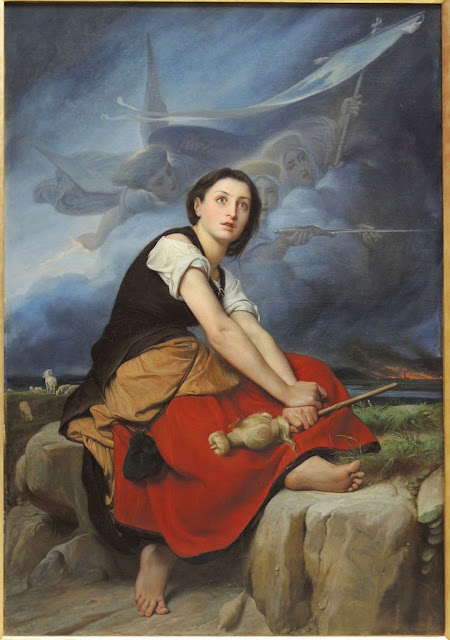 François-Léon Benouville (Paris 30 March 1821 – 16 February 1859 Paris) was a French painter. He first studied with his elder brother Jean-Achille Benouville (1815–1891) in the studio of François-Edouard Picot before he transferred to École des Beaux-Arts in 1837. Like his brother he received the Prix de Rome in 1845. In Rome, as a Prix de Rome pensionary at the Villa Medici. His works produced in Rome are influenced by early Christianity and often show representations of antiquity. More on François-Léon Benouville

With the approval of the Countess of Geneva and the Franciscan Henri de la Beaume, her confessor and spiritual guide, Colette began her work at Beaume, in the Diocese of Geneva. She remained there but a short time and soon opened at Besancon her first convent. Thence her reform spread to seventeen convents founded during her lifetime. She also inaugurated a reform among the Franciscan friars (the Coletani). These Coletani remained obedient to the authority of the provincial of the Franciscan convents, and never attained much importance even in France.

St Colette had a great desire for a relic of the True Cross. One day when she was contemplating Our Lord's suffering in the midst of her community, she was drawn into an ecstasy. When her contemplation was over, she realized she was holding a small gold crucifix that had not been there before. It contained a small relic of the True Cross. Years later, upon preparing for her death, she gave away her few possessions. The abbess of Besancon received this cross as St Colette told her: “Keep it and treasure it, for it is from Heaven.”

St. Colette was beatified 23 January, 1740, and canonized 24 May, 1807. She was not only a woman of sincere piety, but also intelligent and energetic, and exercised a remarkable moral power over all her associates. She was very austere and mortified in her life, for which God rewarded her by supernatural favours and the gift of miracles. For the convents reformed by her she prescribed extreme poverty, to go barefooted, and the observance of perpetual fast and abstinence. The Colettine Sisters are found to-day, outside of France, in Belgium, Germany, Spain, England, and the United States. More on Saint Colette


Please note that the content of this post primarily consists of articles available from Wikipedia or other free sources online.