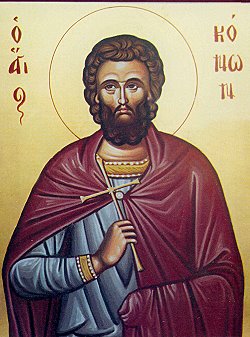 The Holy Martyr Conon of Isauria

The Holy Martyr Conon of Isauria was born in Bethany, a village near the Asia Minor city of Isauria, whose inhabitants had accepted Christianity from the Apostle Paul. From his youth, Saint Conon was accorded the special protection of the Michael the Archange, who appeared to him and assisted him in many difficult circumstances in life. 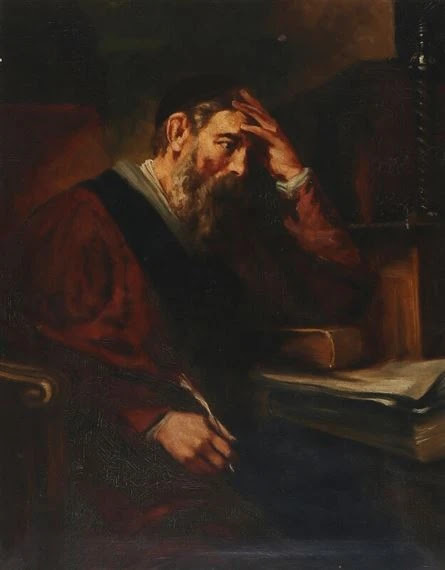 Rembrandt Harmenszoon van Rijn (15 July 1606 – 4 October 1669) was a Dutch painter and etcher. He is generally considered one of the greatest painters and printmakers in European art and the most important in Dutch history. His contributions to art came in a period of great wealth and cultural achievement that historians call the Dutch Golden Age when Dutch Golden Age painting, although in many ways antithetical to the Baroque style that dominated Europe, was extremely prolific and innovative, and gave rise to important new genres in painting.

Having achieved youthful success as a portrait painter, Rembrandt's later years were marked by personal tragedy and financial hardships. Yet his etchings and paintings were popular throughout his lifetime, his reputation as an artist remained high, and for twenty years he taught many important Dutch painters. Rembrandt's greatest creative triumphs are exemplified most notably in his portraits of his contemporaries, self-portraits and illustrations of scenes from the Bible. His self-portraits form a unique and intimate biography, in which the artist surveyed himself without vanity and with the utmost sincerity.

In his paintings and prints he exhibited knowledge of classical iconography, which he molded to fit the requirements of his own experience; thus, the depiction of a biblical scene was informed by Rembrandt's knowledge of the specific text, his assimilation of classical composition, and his observations of Amsterdam's Jewish population. Because of his empathy for the human condition, he has been called "one of the great prophets of civilization." More on Rembrandt Harmenszoon van Rijn

Paul the Apostle (c. 5 – c. 67), commonly known as Saint Paul, and also known by his native name Saul of Tarsus was an apostle (though not one of the Twelve Apostles) who taught the gospel of the Christ to the first century world. He is generally considered one of the most important figures of the Apostolic Age. In the mid-30s to the mid-50s AD, he founded several churches in Asia Minor and Europe. Paul took advantage of his status as both a Jew and a Roman citizen to minister to both Jewish and Roman audiences. More Saint Paul 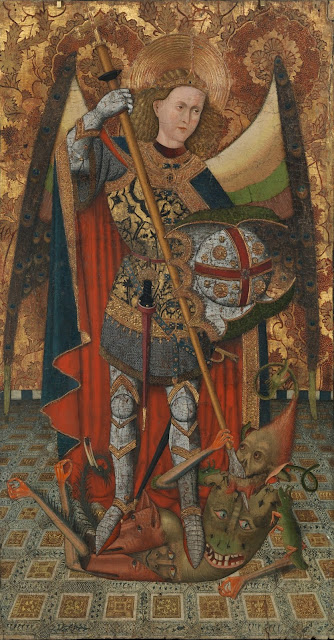 
Armed with a coat of mail, dagger, shield, and lance, the archangel Michael symbolizes the triumph over evil. The demon at his feet is the Antichrist, cast out of heaven. The youthful beauty and sumptuous raiment of Saint Michael. More on this painting

ARCHANGEL MICHAEL, is an archangel in Judaism, Christianity, and Islam. In Roman Catholic, Eastern Orthodox, Anglican, and Lutheran traditions, he is called "Saint Michael the Archangel" and "Saint Michael". In the Oriental Orthodox and Eastern Orthodox traditions, he is called "Taxiarch Archangel Michael" or simply "Archangel Michael".

Michael is mentioned three times in the Book of Daniel, once as a "great prince who stands up for the children of your people". The idea that Michael was the advocate of the Jews became so prevalent that, in spite of the rabbinical prohibition against appealing to angels as intermediaries between God and his people, Michael came to occupy a certain place in the Jewish liturgy.

In the New Testament Michael leads God's armies against Satan's forces in the Book of Revelation, where during the war in heaven he defeats Satan. In the Epistle of Jude Michael is specifically referred to as "the archangel Michael". Christian sanctuaries to Michael appeared in the 4th century, when he was first seen as a healing angel, and then over time as a protector and the leader of the army of God against the forces of evil. By the 6th century, devotions to Archangel Michael were widespread both in the Eastern and Western Churches. Over time, teachings on Michael began to vary among Christian denominations.
More Archangel Michael

At the insistence of his parents, Conon was betrothed to a maiden named Anna. He persuaded her to live with him in virginity after the wedding. The young couple lived as brother and sister, devoting themselves entirely to God. Saint Conon brought also his parents to the Christian Faith. His father, Saint Nestor, received a martyr’s death for denouncing idol-worshippers.

After burying both his mother and wife, Saint Conon continued his service to God, devoting himself entirely to monastic works, fasting and prayer. In his declining years the holy ascetic was glorified with the gift of wonderworking. By virtue of his preaching and miracles many pagans were converted to Christ. It is said that even the evil spirits were forced to serve him. 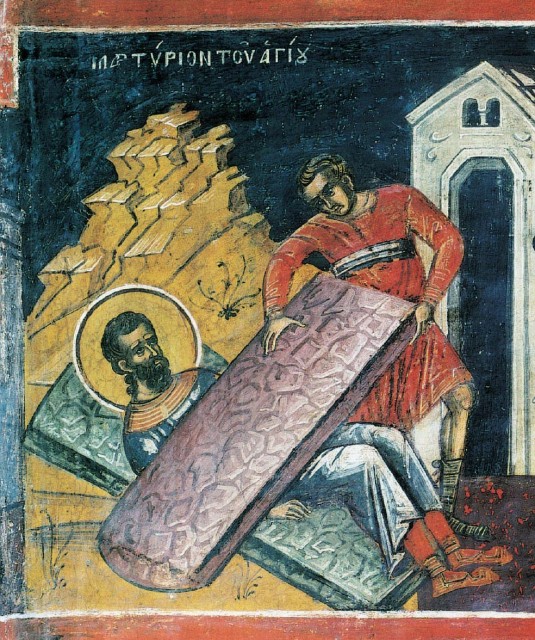 When a persecution against Christians broke out in Isauria, one of the first to suffer was Saint Conon. He was subjected to fierce torments for his refusal to offer sacrifice to idols. When the people of Isauria learned of the tortures to which the saint was being subjected, they came forth bearing arms to defend the martyr. Frightened by the people’s wrath, the torturers fled, and the Isaurians found the martyr wounded and bloodied at the place of torture. 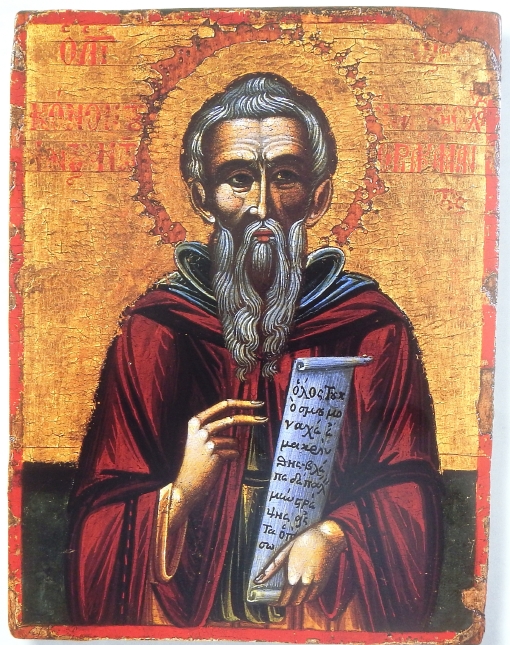 Saint Conon wished to endure martyrdom for the Lord, but he lived two more years. Saint Conon died in the second century and was buried beside his parents and wife. More on Saint Conon

Please note that the content of this post primarily consists of articles available from Wikipedia or other free sources online.
at March 05, 2020