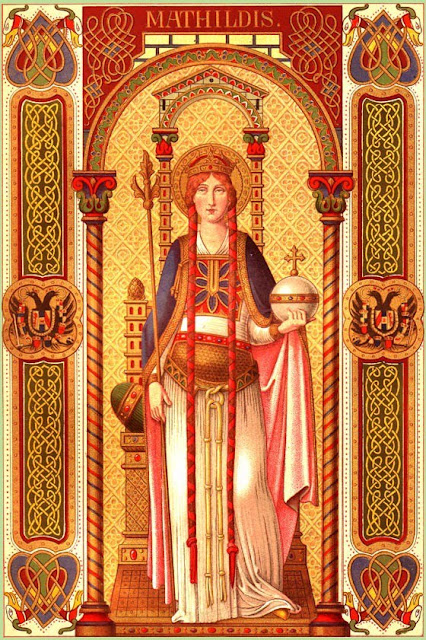 Matilda was the daughter of Count Dietrich of Westphalia and Reinhild of Denmark. She was also known as Mechtildis and Maud. She was raised by her grandmother, the Abbess of Eufurt convent. 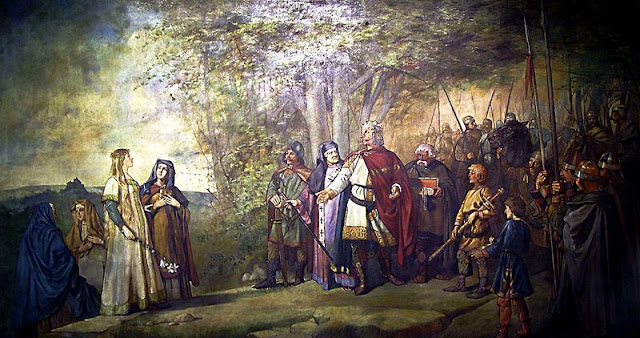 Matilda married Henry the Fowler, son of Duke Otto of Saxony, in the year 909. He succeeded his father as Duke in the year 912 and in 919 succeeded King Conrad I to the German throne. 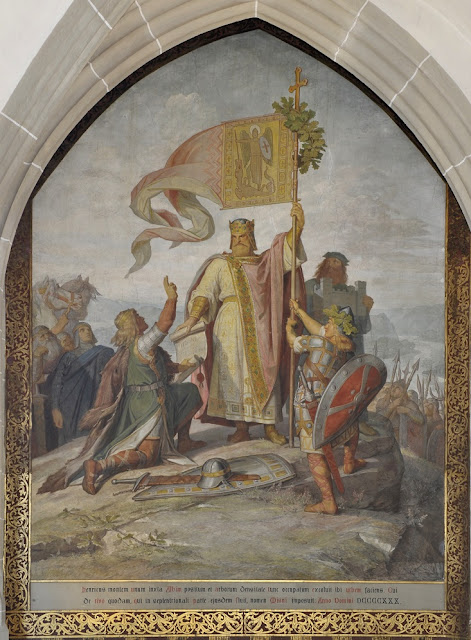 The painting represents the beginning of meißnisch-Saxon history in a fictitious, symbolically compressed scene. The first German King Henry I, planted a flag on the castle hill as a Christian victory sign and presented the certificate of lending to the first margrave Wigbert von Meißen, who was kneeling before him. By the painter the foundation of Meissen with the only 965 under emperor Otto I merged the establishment of the Margraviate, he created a popular historical picture that impressively emphasizes the beginning of Saxon statehood. More on this painting

Anton Dietrich (born May 27, 1833 in Meissen; died August 4, 1904 in Leipzig) was a German painter. At 14, Dietrich came to the Dresden Academy of Fine Arts, where he was a student of sculptor. Despite the political unrest, in 1848 Dietrich made his debut at an exhibition of the Academy with a painting. Dietrich moved, after a short time, to the studio of Julius Schnorr von Carolsfeld. In spite of positive reviews, Dietrich was unable to make a living as a freelance artist, so he supported himself by working as an illustrator for various publishers and art dealers. Dietrich settled down in Weimar. There he discovered wall painting, which was henceforth to be a focus in his art.

One of his first great works was Rudolf von Habsburg on the corpse Ottokar of Bohemia, which earned him an academic travel grant.Through this generous financial support Dietrich spent some formative years in Düsseldorf in 1859/60. He became associated with the Düsseldorf school of painting. From there he launched a trip to Italy, including Venice and Rome, traveling as far as Naples. On his way home he stopped for several weeks in Munich and went from there back to Dresden in 1865.

Dietrich founded a studio in Dresden, in which one of the first works of his series on Otto the Great was born. Photographs of these paintings were soon circulated in large quantities. In 1868, Dietrich was commissioned to embellish the Gothic Hall of the Kreuzschule in Dresden with historical frescoes. After four years, in 1872, Dietrich ended this work successfully. Another commission took Dietrich until 1878 to Johanneum after Zittau, where he created the fresco of Paul preaching at the Areopagus in Athens. The basis for this work was the book of Acts 17, verses 22-23. Dietrich took a position at the Hochschule für Grafik und Buchkunst Leipzig (HGB)(Academy of Visual Arts in Leipzig), where he died at the age of 71 years on 4 August 1904. More on Anton Dietrich

She was noted for her piety and charitable works. She was widowed in the year 936, and supported her son Henry's claim to his father's throne. 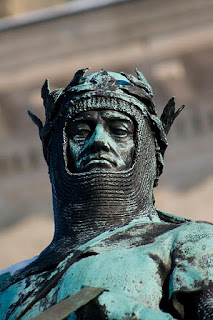 However, it was her son Otto (the Great) that was elected, she persuaded him to name Henry Duke of Bavaria after he had led an unsuccessful revolt. She was severely criticized by both Otto and Henry for what they considered her extravagant charities. She resigned her inheritance to her sons, and retired to her country home but was called to the court through the intercession of Otto's wife, Edith. When Henry again revolted, Otto put down the insurrection in the year 941 with great cruelty. Matilda censored Henry when he began another revolt against Otto in the year 953 and for his ruthlessness in suppressing a revolt by his own subjects; at that time she prophesized his imminent death. When he did die in 955, she devoted herself to building three convents and a monastery, was left in charge of the kingdom when Otto went to Rome in 962 to be crowned Emperor (often regarded as the beginning of the Holy Roman Empire), and spent most of the declining years of her life at the convent at Nordhausen she had built. She died at the monastery at Quedlinburg on March 14 and was buried there with Henry. Her feast day is March 14th. More on Matilda 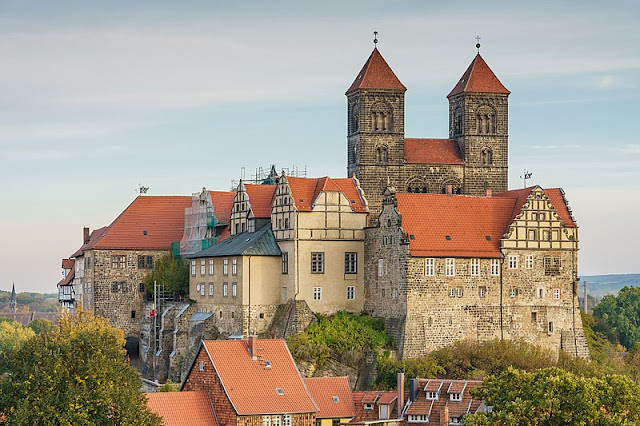 After the death of her husband, King Henry I of Germany, Saint Matilda founded a women’s religious community in the Palace of Quedlinburg, Saxony (Germany). Her body and that of her husband are buried in this convent, where Saint Matilda has been venerated since her death.

Please note that the content of this post primarily consists of articles available from Wikipedia or other free sources online.
at March 14, 2020