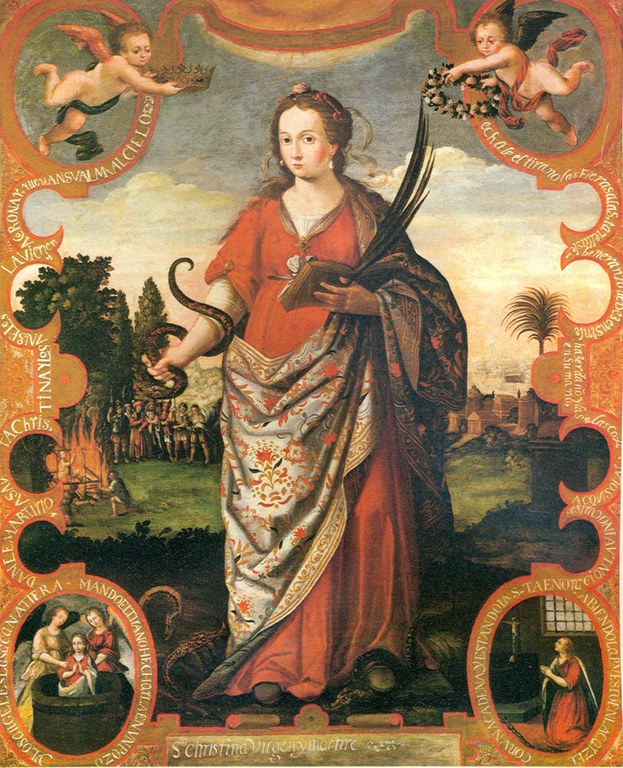 Saint Christina of Bolsena, also known as Christina of Tyre, or in the Eastern Orthodox Church as Christina the Great Martyr, is venerated as a Christian martyr of the 3rd century. Archaeological excavations of an underground cemetery constructed at her tomb have shown that she was venerated at Bolsena by the fourth century. 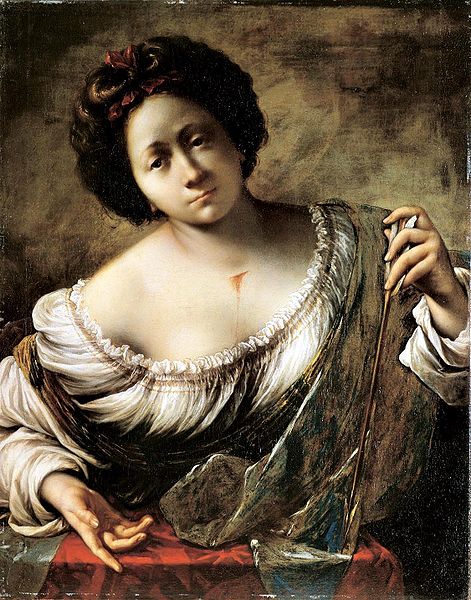 Francesco Cairo (26 September 1607 – 27 July 1665) was an Italian Baroque painter active in Lombardy and Piedmont. He was born and died in Milan. It is not known where he obtained his early training though he is strongly influenced by the circle of il Morazzone, in works such as the Saint Teresa altarpiece in the Certosa di Pavia.

In 1633, Cairo moved to Turin to work as a court painter. Between 1637–1638, Cairo travelled to Rome, where he encounters the works of Pietro da Cortona, Guido Reni and of the Caravaggisti. He returns to Lombardy to complete altarpieces for the Certosa of Pavia and a church at Casalpusterlengo. Between 1646–1649, he returns to Turin, and paints an altarpiece for Savigliano and the church of San Salvario. He is also known as Il Cavalière del Cairo, because in Turin, he received the Order of Saints Maurice and Lazarus in recognition of his merit.

Many of his works are eccentric depictions of religious ecstasies; the saints appear liquefied and contorted by piety. He often caps them with exuberant, oriental turbans. More on Francesco Cairo

Nothing is now known about Christina's life. But by the ninth century, an account of her martyrdom was composed, which developed many variants. According to these, she was born either in Tyre (Eastern stories) or in Persia (Western stories) during the 3rd century or 5th century. 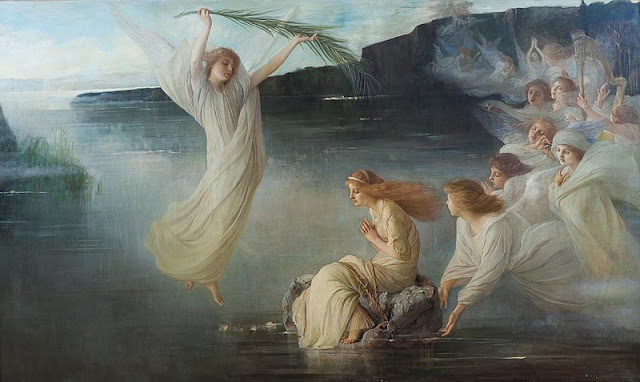 The work represents the martyrdom of Santa Cristina de Bolsena , who was tied by her father to a mill wheel and submerged in a lake, although by divine intervention, the stone was afloat. But in the end she was killed by an arrow shot by Prefect Giuliano. More on this painting

Vicente Palmaroli González (5 September 1834 – 25 January 1896) was a Spanish portrait and genre painter. He was born in Zarzalejo, the son of an Italian painter and lithographer, who was his first teacher. After his father's death in 1853, he took over his official position at the royal art collections. He requested leave in 1857 to go to Rome and complete his education. He participated in the National Exhibition in 1862 with two works he created in Italy, winning a First-Class Medal. The following year, he returned to Italy and remained until 1866.

After his return to the Court, he won a Gold Medal at the National Exhibition of 1867. That same year, he accompanied the Spanish delegation to the Exposition Universelle in Paris. Over the next few years, he would become a renowned portrait painter. In 1873, he settled in Paris and specialized in creating "tableautins"; small format paintings on amusing or pleasant themes designed to be hung in the home. In 1883, he moved to Rome to become Director of the Academia Española de Bellas Artes de Roma .

He returned to Madrid in 1894 when he was appointed Director of the Museo del Prado, a position he would hold until his death.

He suffered a stroke while attending a theatrical performance, became an invalid, and died several months later in Madrid, aged 61. More on Vicente Palmaroli González


She was born into a rich family, and her father was governor of Tyre. By the age of 11 the girl was exceptionally beautiful, and many wanted to marry her. Christina's father, however, envisioned that his daughter should become a pagan priestess. To this end he placed her in a special dwelling where he had set up many gold and silver idols, and he commanded his daughter to burn incense before them. Two servants attended Christina.

Christina was visited by an angel, who instructed her in the true faith. The angel called her a bride of Christ and told her about her future suffering. Christina smashed all the idols in her room and threw them out the window. In visiting his daughter, Christina's father, Urbanus, asked her where all the idols had disappeared. Christina was silent. Then, having summoned the servants, Urbanus learned the truth from them. 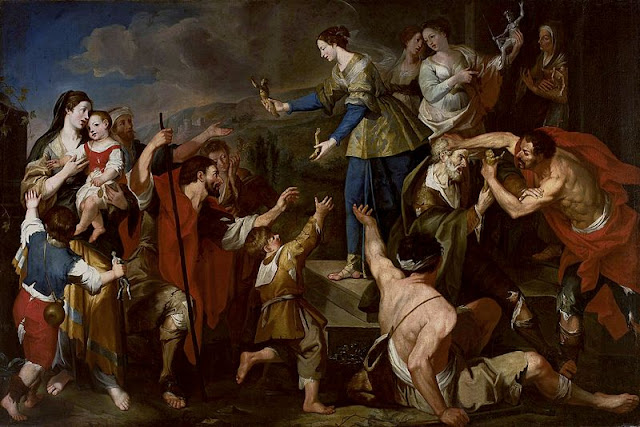 Massimo Stanzione (1585 – 1656) was an Italian Baroque painter, mainly active in Naples, where he and his rival Jusepe de Ribera dominated the painting scene for several decades. Most of his work, in both oils and fresco (these usually for ceilings), depicted religious subjects. A papal knight, he is often referred to as Cavalliere Massimo Stanzione.

Born in Frattamaggiore, Naples, Massimo Stanzione was influenced by Caravaggio. Art historians believe that Stanzione developed his career as an artist in Rome. It is thought that he began his career as a portraitist. In 1621, pope Gregory XV awarded him the title of Knight of the Golden Spur and in 1627, he received the title of Knight of Saint George, and Urban VIII invested him with the Order of Christ.

Urbanus had his daughter tortured because of her faith, but God thwarted his efforts on several occasions. The nature of the torture included iron hooks, grilling by fire, placement in a furnace, torture on the wheel, assault by snakes, assailment by arrows, and other assorted methods which she survives. After her father's death, his successor, Dion, continued to torture her. Christina is eventually beheaded. More on Saint Christina 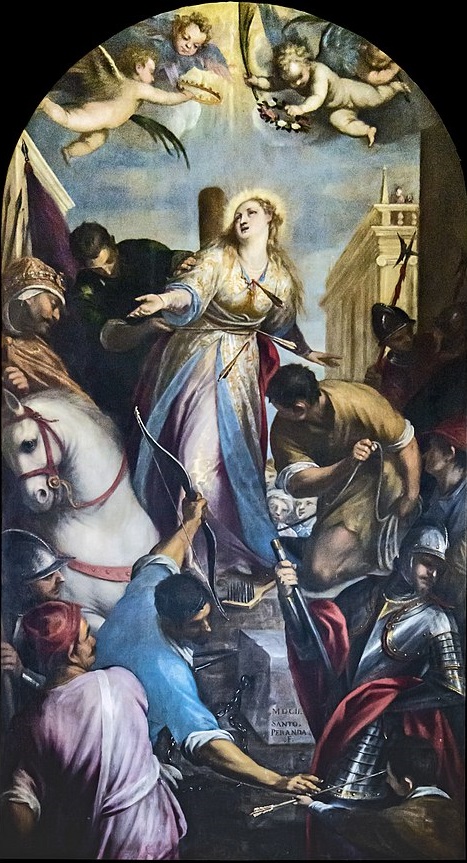 Sante Peranda (1566–1638) was an Italian painter of the late-Renaissance period.

He was a pupil of Leonardo Corona and later Palma il Giovane. Also known as Santo Peranda. He painted a Descent from the cross for San Procolo in Venice. He painted The defeat of the Saracens for the Ducal Palace of Modena. He painted the Gathering of the Manna for the church of the San Bartolome. In 1623 he finished Glorious Mysteries for the church of San Nicolò in Treviso. Among his pupils were Francesco Maffei, Matteo Ponzone, and Filippo Zaniberti. More on Sante Peranda

Please note that the content of this post primarily consists of articles available from Wikipedia or other free sources online.
at March 13, 2020