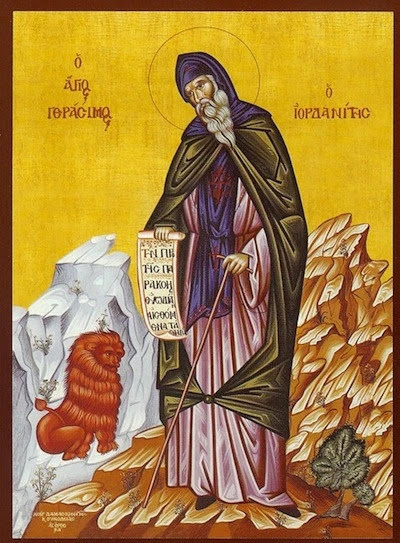 Gerasimus of the Jordan was a Christian saint, monk and abbot of the 5th century AD. He was born into a wealthy family in the the southern part of Asia Minor, but he left his family wealth and worldly affairs to become a monk. He attended the Fourth Ecumenical Council at Chalcedon in 451 AD. His feast day is celebrated on March 4. 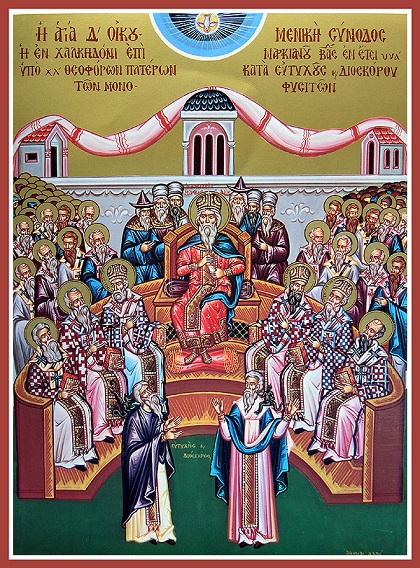 The Council of Chalcedon was a church council held from October 8 to November 1, 451 AD, at Chalcedon (a city of Bithynia in Asia Minor), on the Asian side of the Bosporus-Istanbul today. The council marked a significant turning point in the Christological debates that led to the separation of the church of the Eastern Roman Empire in the 5th century 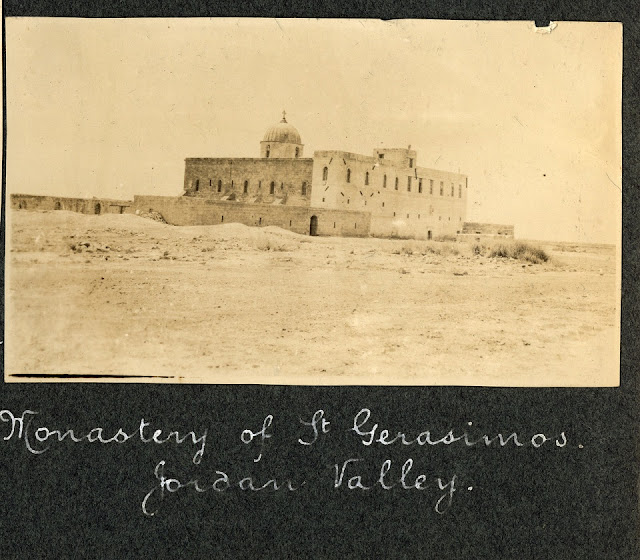 This photograph is from an album created by Lt Thomas Gerald George Fahey who served in the Australian Light Horse in the Middle East during World War 1.

Gerasimos lived in the fifth century and was the abbot of a community of 70 monks who all lived in the desert east of Jericho, near the Jordan River. Their life was strict, they slept on reed mats, had cells without doors and observed silence. Their diet consisted mainly of water, dates and bread. It is said, that Gerasimos in ongoing repentance for having been influenced by the teachings of a heretic in his youth, lived on even less than the norm. 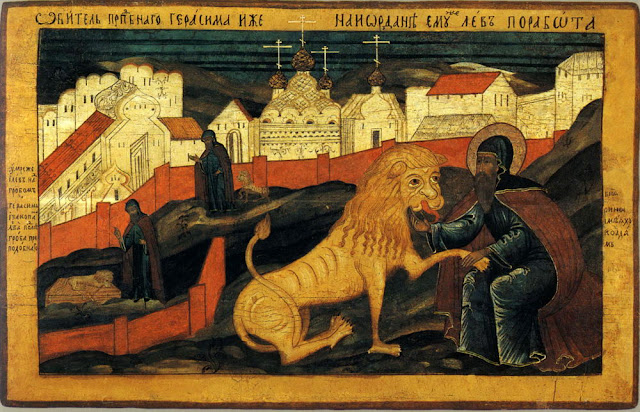 THE MONASTERY OF VENERABLE GERASIM ON THE JORDAN, WHOM THE LION SERVED

One day while he was walking along the Jordan, Gerasimos came upon a lion roaring in agony because of a large splinter imbedded in one paw. The lion held one paw in the air, and Gerasimos could see it was bloody and swollen because of a splinter of reed that had become stuck in it. 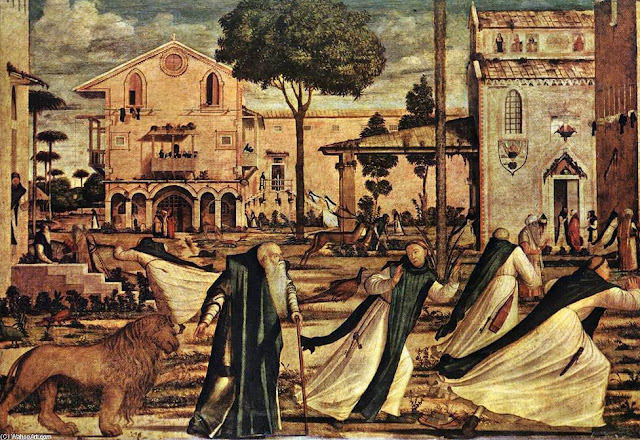 The lion meekly followed Saint Gerasimus back to his monastery

Overcome by compassion for the beast, Gerasimos removed the splinter and cleaned the wound, bounding it up, expecting the lion to return to its cave. Instead the creature meekly followed him back to his monastery and became his devoted pet. The whole community was amazed at the animal's conversion to a peaceful nature, life and devotion to the abbot; living on bread and vegetables. 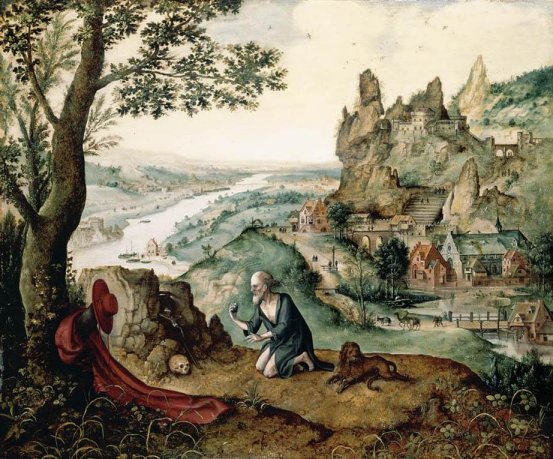 Sano di Pietro
Carpaccio in the Scuola di San Giorgio degli Schiavoni in Venice, the lion has just arrived, much to the consternation of the monks

The lion was given the special task of guarding the communities donkey, which grazed along the Jordan. One day, it happened that, while the lion was napping, the donkey strayed and was stolen by a passing trader. After searching, without success, the lion returned to the monastery, it head hanging low. The brothers concluded that the lion had been overcome and had eaten the donkey and as punishment, gave the lion the job of the donkey; to carry water each from the river to the monastery in a saddle pack with four earthen jars. 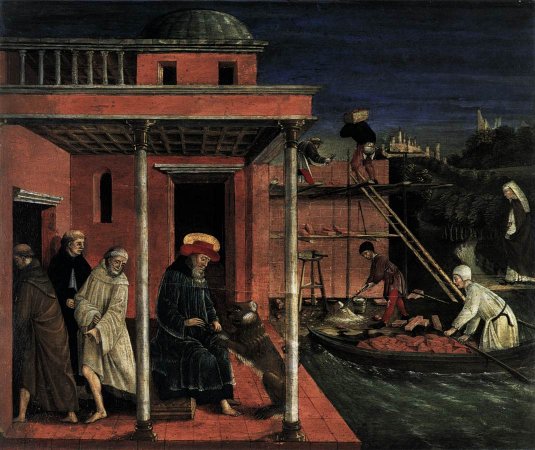 This picture features all the best events from the Golden Legend story: the removal of the thorn, the merchants helping themselves to the ass. The cycle was painted for the Jesuit convent in Siena: it is now in the Louvre.

Sano di Pietro or Ansano di Pietro di Mencio (1406–1481) was an Italian painter of the Sienese school of painting. His career spanned from the end of the Trecento period into the Quattrocento period. His contemporaries included Giovanni di Paolo and Sassetta.

Sano was born in 1406. His name enters the roll of painters in 1428 where it remained until his death in 1481. In addition to his own painting and overseeing the pupils and assistants in his workshop, he was also part of the civic fabric of Siena. There are city records showing his participation. In 1431 and 1442 he was the leader of the San Donato district of Siena. Sano was also employed as an arbitrator; in 1475 he was called upon to settle a dispute between fellow painters Neroccio di Bartolommeo and Francesco di Giorgio Martini.

It was, however, as a painter that he made his living. The workshop he ran produced huge number of artworks. Sano himself is quite interesting. He wasn't merely a painter of altar pieces. He also produced frescoes, miniatures, and book bindings. Book bindings are exquisite little paintings that went on the spine of a book. After a long and successful career Sano died in 1481. More Sano di Pietro

Months later, it happened that the trader was passing through the Jordan with the stolen donkey and three camels. The lion recognised the donkey and roared so loudly that the trader ran away. Taking its rope in his jaws, the lion led the donkey back to the monastery with the camels following behind. The monks realised that they had misjudged the lion; this is how the lion earned his name "Jordanes" from the Elder Gerasimos.

For a further five years, the lion "Jordanes" was part of the monastic community. When the elder fell asleep in the Lord and was buried, Jordanes lay down on the grave, roaring in his grief and beating its head against the ground. Finally Jordanes rolled over and died on the last resting place of Gerasimos. More on Saint Gerasimus 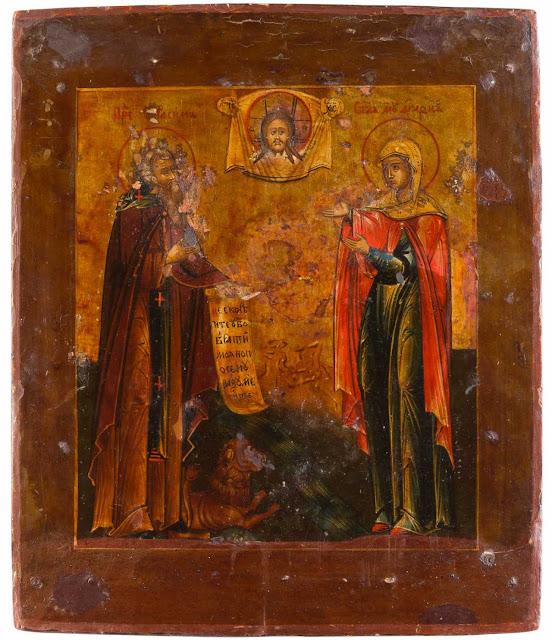 ICON WITH THE SAINT GERASIMOS OF THE JORDAN WITH THE LIONS AND THE SAINTS AGATHIA, Russia, around 1800
Single panel two sides-Sponki
Egg tempera on gesso, silvered Background, gold-colored glaze
32 x 27.5 cm.

Please note that the content of this post primarily consists of articles available from Wikipedia or other free sources online.
at March 04, 2020