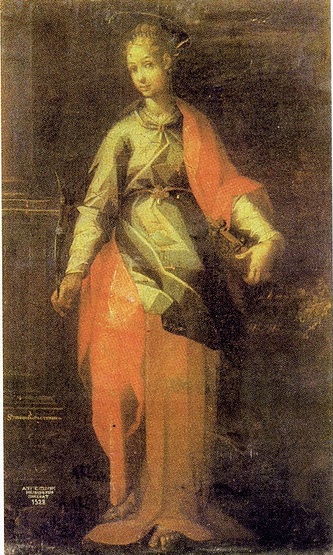 Febronia of Nisibis, also known as Febronia of Sebapte, was a nun at Nisibis. She was raised at a monastery in Assyria. The head of the women’s monastery was the abbess Bryaena, her aunt. Being concerned about her niece’s salvation, she assigned her a stricter form of life than the other nuns.

News of her pious life spread throughout the city. The illustrious young widow Hieria, a pagan, began to visit her, and under the influence of her guidance and prayer she accepted holy Baptism, bringing her parents and kinsfolk to the Christian Faith. 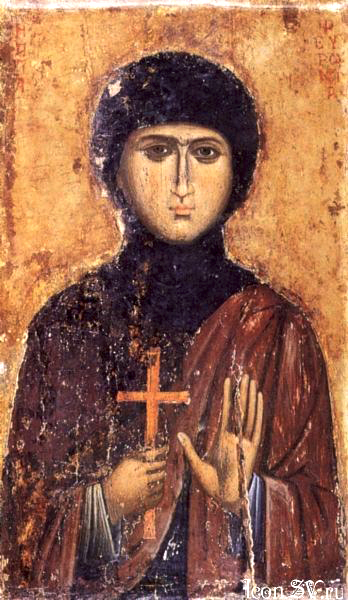 Diocletian sent a detachment of soldiers to Assyria under the command of Lysimachus, Selinus and Primus for the destruction of Christians. Selenos, the uncle of Lysimachus, was noted for his fierce attitude against Christians. When the detachment of soldiers approached the convent, its inhabitants hid. There remained only the abbess Bryaena, her helper Thomais and Saint Febronia, who was seriously ill at the time. 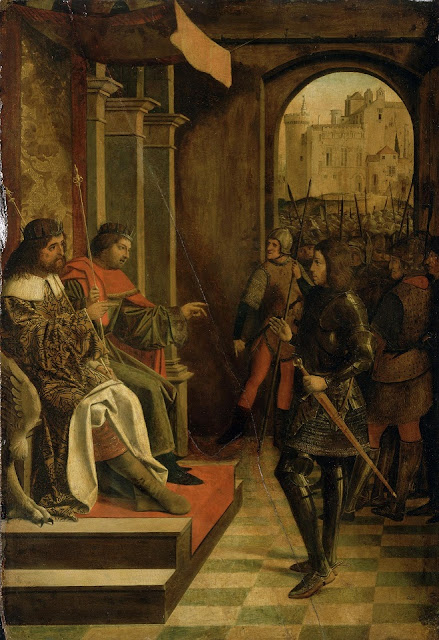 Josse Lieferinxe (working ca 1493–1503/08) was a South Netherlandish painter, formerly known by the pseudonym the Master of St. Sebastian.


Originating in the diocese of Cambrai in Hainaut, then part of the territories ruled by the Dukes of Burgundy, Josse Lieferinxe was documented as a "Picard" in the regions of Avignon and Marseille at the end of the fifteenth and in the early sixteenth centuries. He was first mentioned in Provence in 1493. In 1503 he married Michelle, a daughter of Jean Changenet, the most prominent painter of Avignon, in whose atelier Lieferinxe may have matured his style. He was last mentioned living in 1505, and in 1508 as deceased. More on Josse Lieferinxe

Selinus gave orders to bring him all the nuns of the convent. Primus with the detachment of soldiers found no one, except the two old women and Saint Febronia. He regretted that they had not hidden, and he suggested to the nuns that they flee. But the nuns decided not to leave the place of their labors and they entrusted themselves to the will of the Lord.

Primus told Lysimachus about the particular beauty of Saint Febronia and advised him to take her for himself. Lysimachus said that he would not seduce a virgin dedicated to God, and he asked Primus to hide the other nuns somewhere so that they would not fall into the hands of Selinus. One of the soldiers overheard the conversation and told Selinus. They led Saint Febronia off to the military commander with her hands bound and a chain around her neck. Selinus urged her to deny Christ, promising her honors, rewards, and marriage with Lysimachus. The holy virgin fanswered that she had an Immortal Bridegroom, and she would not exchange Him for any mortal man. Selinus subjected her to fierce torture. 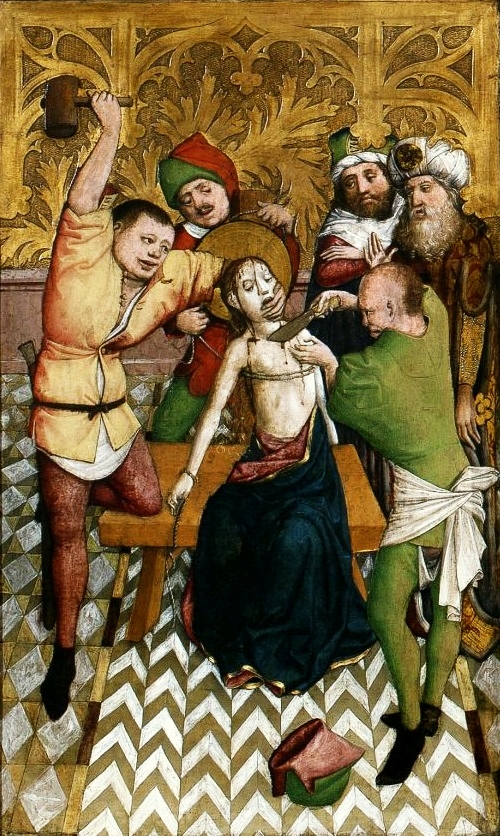 Wilhelm Kalteysen from Aachen (around 1420, died after 1496) - painting master in Wrocław .

Educated probably in Aachen , Cologne and the Netherlands . Perhaps he was in Nuremberg , where he could get acquainted with the work of the Master of the Tucher Altar. In 1447 he made the Altar of Saint Barbara . In the years 1451-1453 / 54 together with helpers he painted the main altar for the church of St. Jacob in Nysa . In the years 1464-1466 he decorated the organs of the Augustian church in Kłodzko. His granddaughter Justyna was the wife of a painter and sculptor Jakob Beinhard the elder .

They beat the martyr for a long time, and blood flowed from her wounds. In order to intensify her suffering they tied her to a tree and set a fire under it.

Unknown artist
The pitiless men beat her for a long time, whilst others made a fire under her and sprinkled the fire with oil, causing her worse burns
Unknown artist

The tortures were so inhuman, that the people began to demand an end to the torture, since there was no confession of guilt by the girl. Selinus continued to mock and jeer at the martyr, but Saint Febronia became silent. 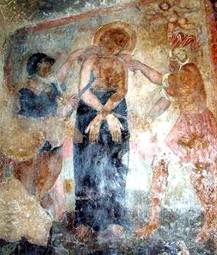 Unknown artist
The martyrdom of Saint Febronia, sandwiched between two authors in the act of cutting cavarle breasts and teeth
Fresco
Located at rock-Hermitage Byzantine St. Febronia in the "cost" of Palagonia

Because of weakness she was unable to utter a word. In a rage Selinus gave orders to tear out her tongue, smash her teeth, and finally, to cut off both hands and feet. The people were unable to bear such a horrid spectacle and they left the scene of the torture, cursing Diocletian and his gods. Finally, they beheaded the holy Martyr Febronia. 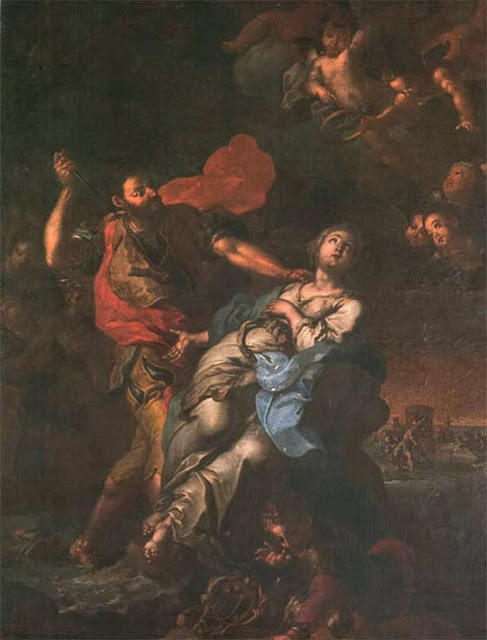 Guglielmo Borremans or Guglielmo Fiamingo (1670–1744) was a Flemish painter. He worked and lived for most of his life in Naples and Sicily. Particularly versed in the frescoes. Rubens and the seventeenth-century Neapolitan painters influenced his style. In Naples he painted the frescoes of Santa Caterina in Formello. His talent was highly appreciated in Trinacria and his works are found in many churches and museums in the region. Among his masterpieces, the frescoes of the church of Santa Maria La Nova in Caltanissetta, those of the basilica of Santa Maria Assunta in Alcamo, in the church of Sant'Antonio Abate in Buccheri, Syracuse and Palermo in the church of the Assumption of San Giuseppe dei Teatini and in the halls on the main floor of the Archbishop's Palace and in the chapel, with Episodes from the life of Christ , from 1733. More on Guglielmo Borremans

Departing the place of execution, Lysimachus wept and withdrew to his quarters. Selinus made ready to eat, but he was not able to take food, and went off to the quiet of his own chambers. Suddenly, he became like one deranged. Looking up to the heavens, he raved and bellowed like a bull, then fell down and struck his head on a marble column and died. More on Febronia of Nisibis 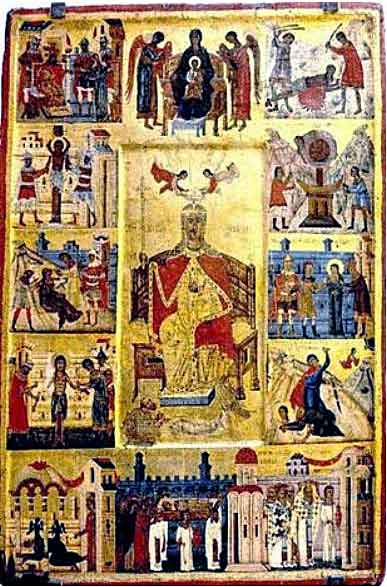 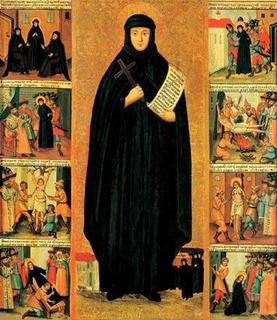