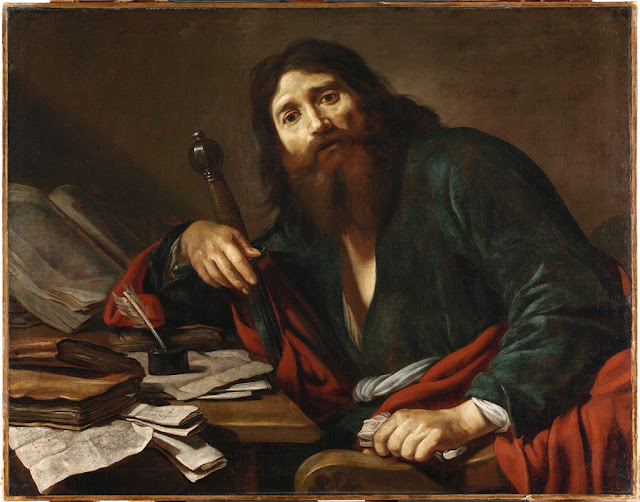 Claude Vignon (19 May 1593 – 10 May 1670) was a leading French painter and engraver working in the Baroque manner. He was born at Tours and received early training in Paris. About 1610 he travelled to Rome where his mature style was formed in the circle of French painters there that included Simon Vouet and Valentin de Boulogne, a prominent member of the Caravaggisti working, like Bartolomeo Manfredi, in the manner established by Caravaggio.

He returned from Italy, after a tour in Spain, in 1623. His paintings are represented in most of the major museums. More on Claude Vignon

St. Paul, named Saul at his circumcision, a Jew of the tribe of Benjamin, was born at Tarsus, the capitol of Cilicia. He was a Roman citizen. He was brought up as a strict Jew, and later became a violent persecutor of the Christians.

On his way from Jerusalem to Damascus with a mandate issued by the High Priest to seek out and arrest followers of Jesus, with the intention of returning them to Jerusalem as prisoners for questioning and possible execution. 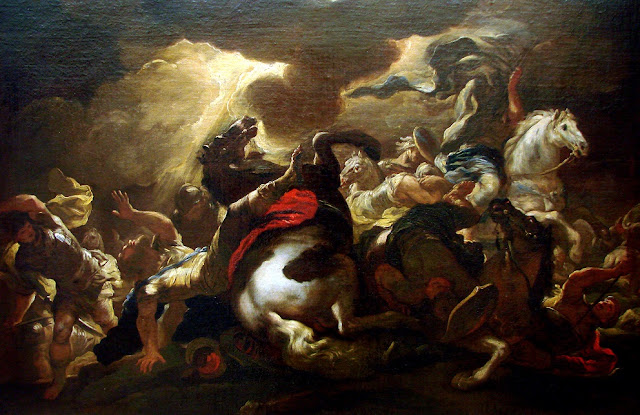 Luca Giordano (18 October 1634 – 12 January 1705) was an Italian late Baroque painter and printmaker in etching. Fluent and decorative, he worked successfully in Naples and Rome, Florence and Venice, before spending a decade in Spain.

Born in Naples, Giordano was the son of the painter Antonio Giordano. In around 1650 he was apprenticed to Ribera, and his early work was heavily influenced by his teacher. Like Ribera, he painted many half-length figures of philosophers, either imaginary portraits of specific figures, or generic types.

He acquired the nickname Luca fa presto, which translates into "Luca paints quickly." His speed, in design as well as handiwork, and his versatility, which enabled him to imitate other painters deceptively, earned for him two other epithets, "The Thunderbolt" (Fulmine) and "The Proteus" of painting.

Following a period studying in Rome, Parma and Venice, Giordano developed an elaborate Baroque style fusing Venetian and Roman Influences. His mature work combines the ornamental pomp of Paul Veronese with the lively complex schemes, the "grand manner", of Pietro da Cortona. He is also noted for his lively and showy use of colour. More Luca Giordano 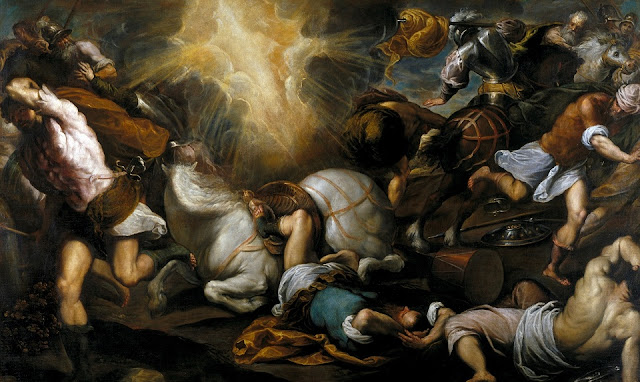 Palma specialized in the type of contemplative religious picture known as the sacra conversazione. To his late 15th-century subject matter he applied the idyllic vision of Giorgione in colour and fused soft-focus effects. Palma’s particular refinement of the Giorgionesque technique was his use of transparent glazes, most of which later deteriorated. Monumental figures, loose technique, and blond tonality characterize his finest work). Palma also developed an ideally feminine, blonde, pretty type, which may be seen in such works as the Three Sisters. That work, along with many of his later paintings, shows the influence of Lorenzo Lotto. Sixty-two of Palma’s works remained unfinished at his death and were finished by his pupils. Presumably, this accounts for the variable quality of his work. More on Jacopo Negretti

The journey is interrupted when Paul sees a blinding light, and communicates directly with a divine voice. 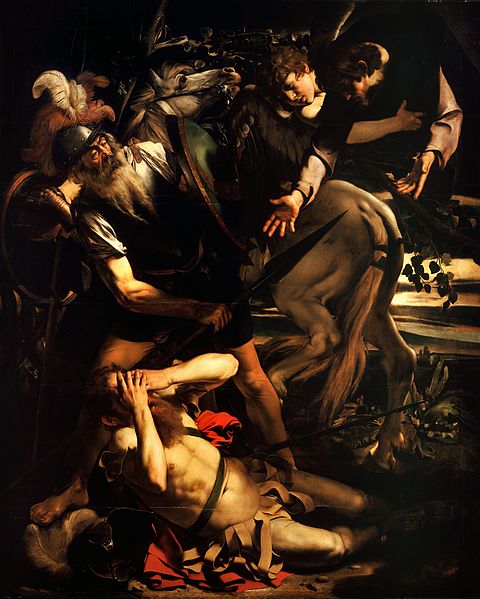 Michelangelo Merisi da Caravaggio (29 September 1571 in Caravaggio – 18 July 1610) was an Italian painter active in Rome, Naples, Malta, and Sicily between 1592 and 1610. His paintings, which combine a realistic observation of the human state, both physical and emotional, with a dramatic use of lighting, had a formative influence on Baroque painting.
Caravaggio trained as a painter in Milan under Simone Peterzano who had himself trained under Titian. In his twenties Caravaggio moved to Rome where there was a demand for paintings to fill the many huge new churches and palazzos being built at the time. It was also a period when the Church was searching for a stylistic alternative to Mannerism in religious. Caravaggio's innovation was a radical naturalism that combined close physical observation with a dramatic use of chiaroscuro which came to be known as tenebrism (the shift from light to dark with little intermediate value).
He gained attention in the art scene of Rome in 1600 with the success of his first public commissions, the Martyrdom of Saint Matthew and Calling of Saint Matthew. Thereafter he never lacked commissions or patrons, yet he handled his success poorly. He was jailed on several occasions, vandalized his own apartment, and ultimately had a death sentence pronounced against him by the Pope after killing a young man, possibly unintentionally, on May 29, 1606. He fled from Rome with a price on his head. He was involved in a brawl in Malta in 1608, and another in Naples in 1609. This encounter left him severely injured. A year later, at the age of 38, he died under mysterious circumstances in Porto Ercole in Tuscany, reportedly from a fever while on his way to Rome to receive a pardon.


Famous while he lived, Caravaggio was forgotten almost immediately after his death, and it was only in the 20th century that his importance to the development of Western art was rediscovered. More on Caravaggio

He fell to the ground and heard a voice say to him, "Saul, Saul, why do you persecute me?"


"I am Jesus, whom you are persecuting," he replied. "Now get up and go into the city, and you will be told what you must do."

Saul got up from the ground, but when he opened his eyes he could see nothing. So was led him by the hand into Damascus. For three days he was blind, and did not eat or drink anything.

Ananias of Damascus receiving a divine revelation instructing him to visit Saul at the house of Judas and there lay hands on him to restore his sight. Ananias is initially reluctant, having heard about Saul's persecution, but obeys the divine command. 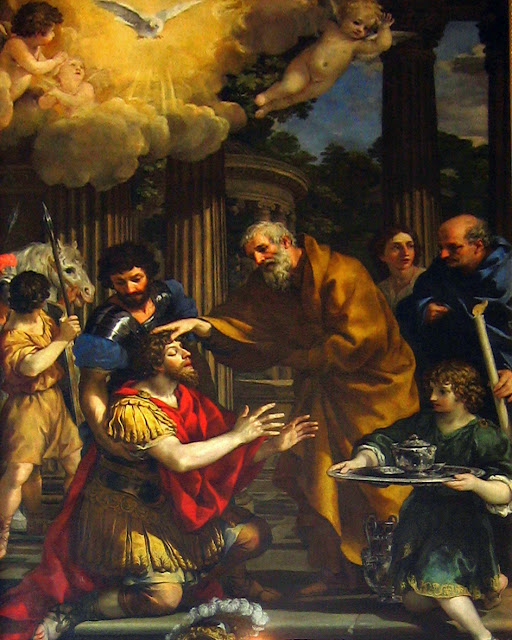 Pietro da Cortona (1 November 1596/7 – 16 May 1669) was born Pietro Berrettini, but is primarily known by the name of his native town of Cortona in Tuscany. He was the leading Italian Baroque painter of his time and, along with his contemporaries and rivals Gian Lorenzo Bernini and Francesco Borromini, was one of the key figures in the emergence of Roman Baroque architecture. He was also an important designer of interior decorations.
Cortona worked mainly in Rome and Florence. He is best known for his frescoed ceilings such as the vault of the salone or main salon of the Palazzo Barberini in Rome and carried out extensive painting and decorative schemes for the Medici family in Florence and for the Oratorian fathers at the church of Santa Maria in Vallicella in Rome. He also painted numerous canvases. Only a limited number of his architectural projects were built but nonetheless they are as distinctive and as inventive as those of his rivals. More on Pietro da Cortona

Placing his hands on Saul, something like scales fell from Saul’s eyes, and he could see again. He got up and was baptized, and after taking some food, he regained his strength. More on The conversion of Paul